.
A BONZER TIME AT THE BONCHURCH INN

After the Help Beyond the Call of Duty rendered me the other day, in my vehicular distress, by the lads of the Medina Monarch, I reckoned I owed these Jolly Young Watermen a shout. Pick your place, I said. And so, last night, Matt, Ian, friend Carole and I headed for the Bonchurch Inn. ‘You’ll like it’ said Matt in a tone of voice that showed that he wasn’t wholly sure. Why wasn’t he sure?, I wondered. I’m a Very Open-Minded Person. As long as the food’s good, the drink’s good, the service is good, the atmosphere is good..
As soon as we walked through the door any doubt on the last count blew away. Triple Yes! A Proper Pub. With, good grief, barrels of ale! So who cares if they don’t have Guinness on tap, or if mine host admits shamefully to having drunk the entire stock of Chardonnay himself: a pint of Best from the barrel will do me splendidly. 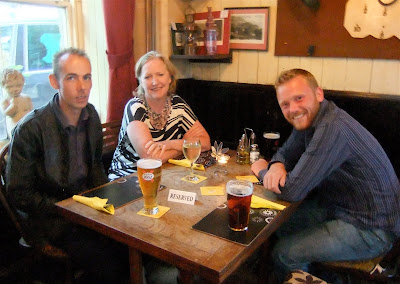 A cosy table in a corner, and a menu which I don’t even open, because Il Signor Besozzi (for, yes, there is an ancient Italian influence here) is telling us what he’s cooked today. Cannelloni spinaci .. oh yes! Or, what? Lasagne with chicken livers and chorizos .. unheard of. Impossible. Who dreamed that up? This creation simply has to be tried.
Salad? No. I explain my allergy to lettuce. But Carole is having salad, so one comes anyway. And Il Signor presents me with a magnifying glass, so I can check it for lettuce. I almost choke with chuckles on my second pint of Best. Oh, what fun eating out can be!
Even better than fun, of course, is good food. And I can tell you the Lasagna Fantastica is good, good, marvellously good food. I almost wept that the helping was so enormous that even with the help of the third pint of Best, I had to leave too much of it on my plate. Next time I shall ask for a Pensioner’s Portion. 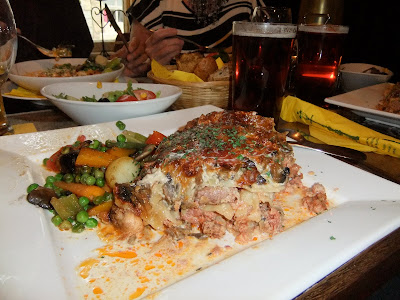 Eating done, I had no wish to leave this merry place, even though it was dangerously near my usual bedtime, and so a fourth pint of Best was called for …
Matt need not have worried. One can love Tio Pepe and soufflé, as served by the suave Buggy at the Royal Hotel, and love Lasagna Fantastica and a barrel of best bitter in a cosy pub just as well. I know one can, because I do.
My evening at the Bonchurch Inn was a total success. The food was grand, the drink was grand, the room is grand, Mine host Adrian is veritably ‘a host in himself’, and his supporting cast help keep the atmosphere humming merrily. 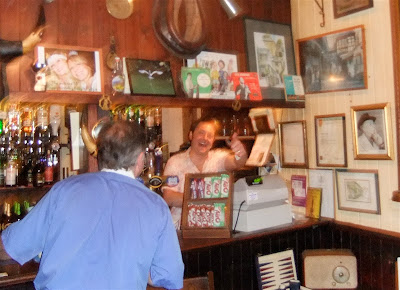 What could one ask for more? The day when I whinged about having nowhere to eat in Ventnor is a century away.

PS I’m told that ‘Jolly Young Waterman’ won’t ring a bell in the 21st century. It’s the title of a very famous old show song, the sort of thing that most of my books are about. Using C19th expressions has almost got me into trouble in recent days. Twice, words I’ve used have had to be edited because the 21st century has given them a new blue meaning of which I wot not. So I can’t say nonce’ anymore, and I can’t say ‘hummer’ (see Urban Dictionary).
PPS ‘Bonzer’ is New Zealandish for ‘terrific’
Posted by GEROLSTEIN at 5:44 AM