The Return of Elena

.
The story of my beautiful Elena ... no, not story, ‘saga’ … has, during the four and a half years since I brought her home from my first visit to the yearling sales, been what can only be called colourful, and her adventures and misadventures filled many a page of this blog, up till the day that she finally made it to the races, and then, earlier this year, at the age of five and at only her seventh raceday start, scored her maiden victory at Addington.
However, in four subsequent starts, she behaved rather badly at the start and, as a result, she was listed as ‘unruly’, and condemned to start from the back row in her races.
We puzzled over her misbehaviour. In her first trials, she had gone away securely from a standing start: now she was being difficult from the theoretically ‘easier’ mobile gate. Gear changes didn’t see to help. So Wendy decided on ‘back to basics’. Elena was put out to spell and, a few weeks ago, she went back to the trials .. back where she started out. The standing start. And she did it. Two ‘safe’ runs, and if she was beaten 15 lengths ... well the horse in front was a Derby horse and a multiple high-class winner.

17 July was our local Rangiora raceday, and Wendy – why not? – decided to enter Elena. She was probably not ready to run anywhere near her best, but she needed practice ... this was to be her first raceday start from a stand. So why not? Still, one way and another, I was barely confident, and the betting public agreed. In a fourteen horse field, Elena went out … fourteenth favourite!
Things began well. Gavin (Smith) got her away nicely, although her draw meant that, when they settled she was at the rear of the field. The pace, however, wasn’t too hot, and when Paul Borcoskie chose a wise moment to take his horse round the field, Gav latched on behind. My eyes boggled. Look at Lena! Round she swept, and when threatened with being left three wide outside the favourite and leader, she and Gav simply went straight on and, as they hit that last hectometres, into the lead. Into the straight she even skipped a length or two clear .. could this be another 100-1 winner for Wendy?
Well, not quite. In the very last metres her condition – unsurprisingly – gave out, and she was pinned back, a length and a bit back, into third. But a decidedly impressive third. 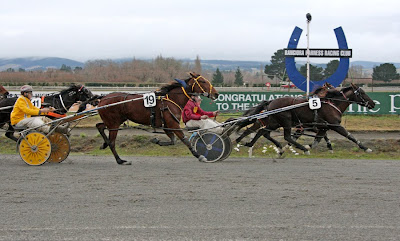 Stoked owner and trainer! One on each side of the world…

Well, if Elena can keep on running like that, this could be a merry season! I hope she can. We know she can do it – Wendy and I have always had faith in her, even through the darkest days of her medical problems – but there were moments when I think we were the only ones. Were we right? The next months should tell. Fingers crossed.
Posted by GEROLSTEIN at 10:56 AM