Mozart for tuppence: the Wybrow story

While I was wading through the opus of Ezra Read, I came upon a puzzling piece of music not by the said Mr Read. 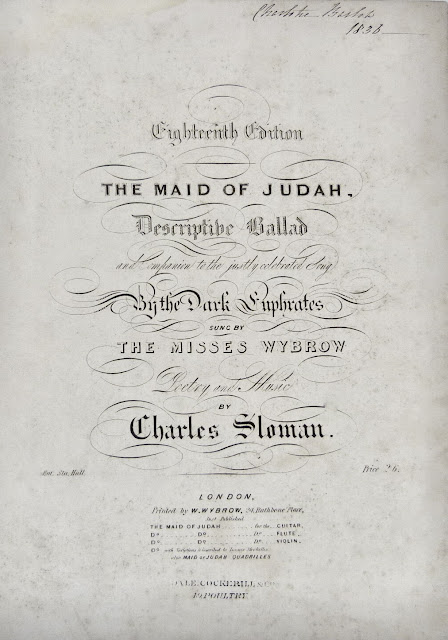 So? Well-known (Jewish) song, by well-known Jewish songwriter. Eighteenth edition already. No particularly interesting except ... the Misses Wybrow? I know pretty well all the featurable singing sisters of the Victorian(ish) concert world. Not they. Who were they, and why did they get such big billing?

Ah. Printed by W Wybrow. Daddy. Hadn't heard of him, either. So, just a proud papa getting his girls' names on a music sheet?  No. Not at all. William Wybrow was, for thirty years, a music publisher based in Rathbone Place, off Oxford Street. And, as I was to discover, a whole lot more than that.

Actually, by 1823, while stillmaintaining Wybrow's Hammersmith Library 'near the Angel Inn', they had already established themselves in Rathbone Place, and William had launched his new career as a bookseller and then as a music-printer ...

The business took off mightily, for Mr Wybrow undercut the quality publishers: 'One thousand songs, including 'Maid of Athens' 3d each or fifteen for 3s. Catalogue gratis...'. 'New and fashionable music'.  Mozart for tuppence... It appears he had got hold of a large collection of elderly plates, which enabled him to produced music for little more than the price of ink and paper. 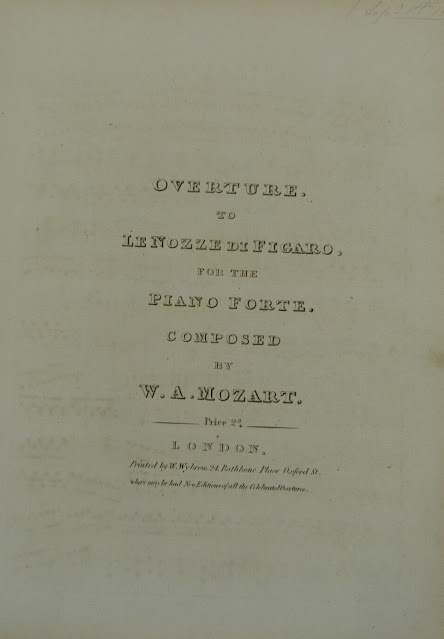 And soon the house of Wybrow had found a stable star, to take over where Henry Thomas Heathcote Esq comedian (whoever he may have been), had left off  ...

8000 copies? Only one seems to have survived. And the words reek a little of Samuel Loney Barker. 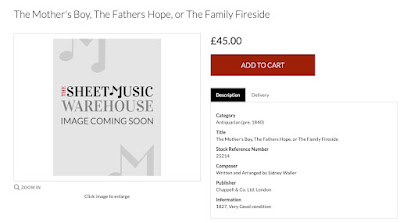 Anyway, Sidney was a multi-talented chap. He wrote songwords, he composed and arranged music, from Weber to Rossini, for new words, and his material was performed by such stars as Miss Love, Miss Graddon, Eliza Vestris over a whole decade. 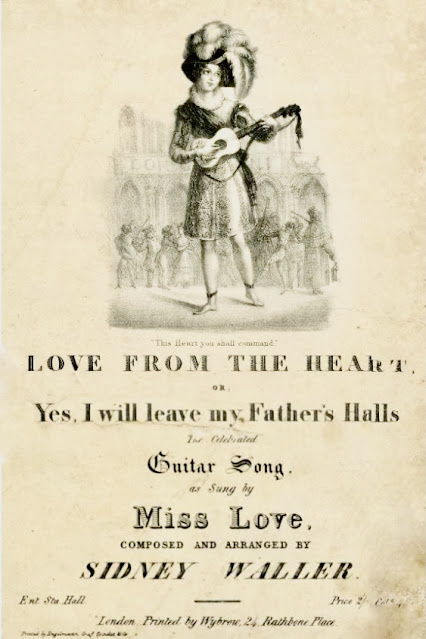 Among his most successful early venture were an arrangement of Weber as 'Love from the Heart' which as sung by Miss Love made its way to the Covent Garden oratorios, and the Manchester Festival, before being taken up by Vestris.

Now the hits started to pour forth. 'Oysters, Sir', a combination of tunes from Rossini's Donna del Lago, was introduced by Miss Graddon, but it soon found wider fame, as did 'The Calais Shrimp Girl', as sung by 'a pupil of Mr Waller': the infant star Elizabeth Poole. 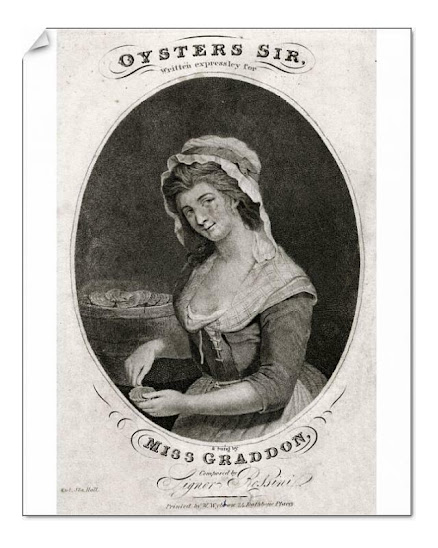 Messrs Wybrow and Waller had got other helpers aboard: in 1827 Signor Leander Zerbini, then Mr Evelyn Manners, then a certain J B Phipps ... 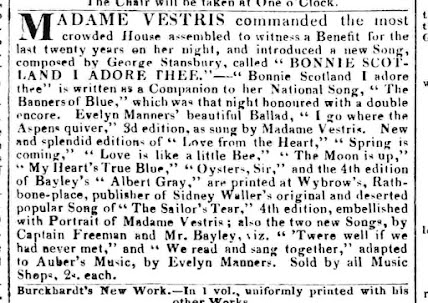 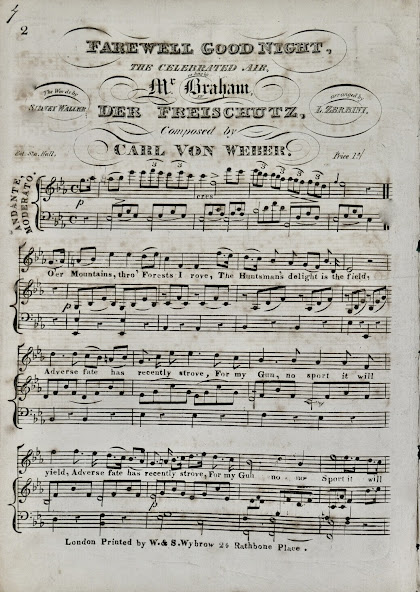 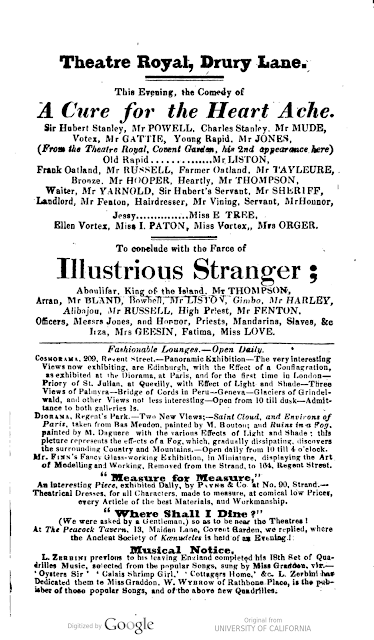 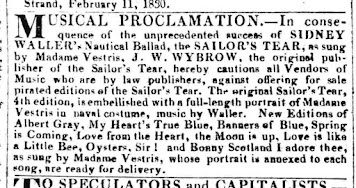 Brother Stephen Wybrow who had partnered William in the publishing venture was alas no longer aboard. He had died in 1826 at the age of 23. It seems that other brother, John (1800-1838) was momentarily involved too .. and then a little Miss Waller Wybrow made a childish debut singing 'Oysters, Sir' efficiently at the Queen's Theatre  ...

Yes, Waller. Mama's maiden name ... so Sidney?  I suspected something was amiss when he didn't turn up anywhere but on music sheets. 'Sidney Warren' was none other than Mr Wybrow himself. As were, so it was reported, 'Signor Zerbini' 'Evelyn Manners' e tutti quanti ... I even suspected poor Thomas Blomer Phipps, the guitarist, of being another Wybrow doppelgänger .. and Mr (1775-1837) and Mrs Walter Turnbull (the former Anne Charlotte Fayerman), music-sellers of Oxford Street ... 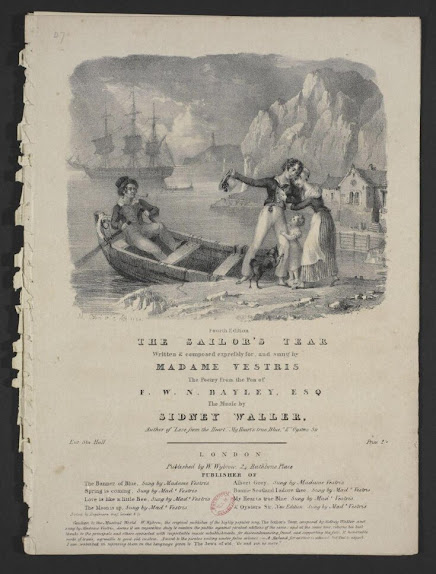 So: Miss Waller Wybrow. Mary, Rhoda or Annie? At her debut, in 1831, she was said to be six. To get anywhere near, it would have to be Annie.  Well, Miss Waller Wybrow might not have been a Miss Poole, but she had her moment. And it was announced that Bayley would write a play for her, with music 'by her godfather, Sidney Waller'. Haha. But Willie was a joker. On one occasion he gave a lecture on the life and works of Leander Zerbini.

She stayed around for several years, playing Little Pickle at the Sans Souci, Albert in William Tell (Sloman's 'I am a merry mountain child'), and in concert and protean comedy at the Colosseum .. and there she is singing 'I'm the Little Drummer Boy' 'accompanied by herself on the drum' at the Queen's. The imitation of Miss Poole was just too palpable!

At the same time 'Miss Wybrow, pupil of Waller and Alberti, gives practical instruction in singing, style of Miss Stephens, also the pianoforte and Spanish guitar ...'. No. Not Annie. It must be Mary or Rhoda. And Fernando Alberti? I assume a reincarnation of the dear departed Signor Zerbini ..? 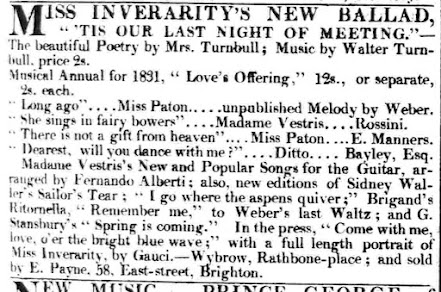 But he's added Miss Paton and Miss Inverarity to his star list ...

So in 1836, here is Miss Wybrow in the London concerts. Heaven knows which one. Singing 'Sloman's beautiful ballad 'Shall we sing tonight' at the King's Concert Rooms, Alexander Lee's ''Ere I watch the star to see' .. and occasionally 'the Misses Wybrow' ...

Well, from 24 April 1839 we know who the Misses are. Annie and Rhoda. Because Mary, on that date, became Mrs Vincent Robert Albert Brooks, wife of an Oxford Street stationer. Rhoda was a witness. Mary Ann died in 1842 (3 August) in what I assume was childbirth. And Mr Brooks 'married' Rhoda! They had two children. When Willie died he named Rhoda and Annie as his executors. Both, he said, were spinsters. I suppose it was that 'deceased wife's sister' thing. Anyway, Vincent became a lithographic tycoon, boss of over a hundred printworkers, the printer of the famous 'Spy' cartoons of Vanity Fair, and died in 1885. Rhoda was the last survivor of the Misses Wybrow, and died 22 April 1892.

So, anyway, then there was one. Annie. She is with her parents at Rathbone place in 1841; by 1851, with Hannah gone, she is still there with papa.  Only when he had died did she become Mrs Wilson Twentyman, wife of a silk manufacturer. She died in 1885.

Rhoda published an 1838 set of sacred melodies for the guitar, Annie published all sorts 'professor of singing, pianoforte and guitar, pupil of Signor Crivelli, authoress of 'The Blind Girl's Dream', 'Ties of Home' and 'Dearest Spot on Earth'. ' 'Pupil of Crivelli, H R Allen and the Royal Academy of Music'. 'The Heart's Wish, or Dieu vous benisse', 'Rosalia Waltzes' ...

Willie Wybrow died 16 October 1859, at 40 King Street, Covent Garden. He didn't leave a heap of money, but I think he owned the freehold on no 33 Rathbone Place ... I see that after his death it became the home of Winsor and Newton .. 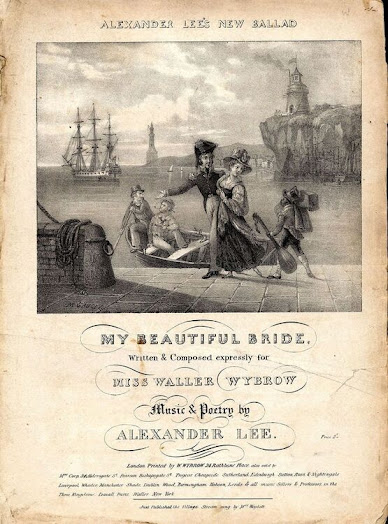 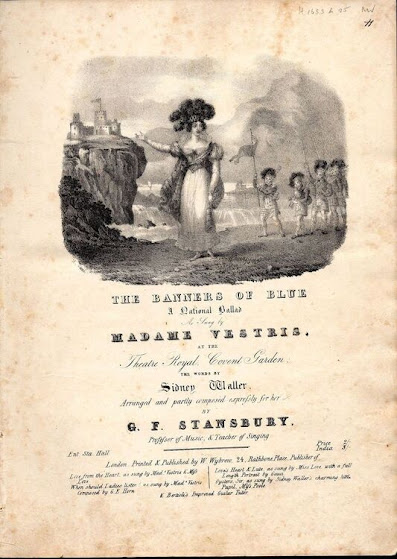 That should be the end of this tale, but I have a wee coda. I had to investigate, even though it's past my bedtime.

In the late 1700s and early 1800s the name of Wybrow was somewhat celebrated in the London theatre. A 'Mrs Wybrow' was a favourite dancer, especially as Columbine in pantomime ('enchanting', 'incomparable'), and her likeness has survived in a couple of contemporary engravings. She looks ... lush. And apparently her love/sex life was a six volume novel of more than usual chapters. 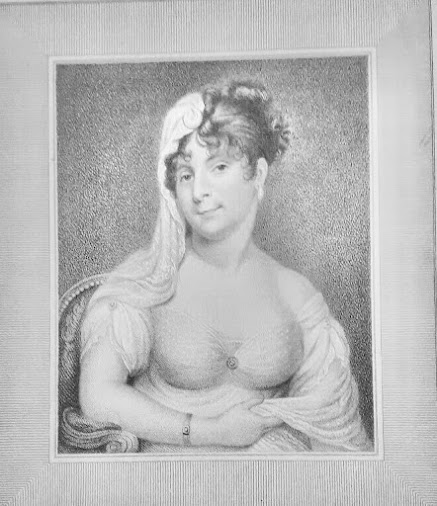 Just to set the record straight, Mrs W was born Clarissa Blanchet (sic), daughter of publican Thomas Blanchet who, at one stage, ran the pub across from where I used to live in London's Bruton Street. She was trained by d'Egville at Drury Lane, and danced there as Mlle Blanchet until 1793 (30 December) when she married Mr William Wybrow. 'The eminent surgeon'. Eminent, my foot. The young Mr Wybrow was a 'pupil to Mr Paine of Brook St' and in 1796 he was seconded as an assistant surgeon to the 1st Regiment of Foot Guards. In 1799 he was promoted to Surgeon. He went to Ceylon and India, remained there for his whole career, with various regiments (Meron's, 17th Light Dragoons, and doubtless never saw Clarissa again. But she kept his name.

She didn't lack replacement 'husbands', although they seem not to have been durable. At various stages a Mr Morris, a Mr Dobson 'attorney', Lord Craven (of 10 Queen Street, Mayfair) and, finally, a Mr White are mentioned. When shed died, at an age somewhere between 48 and 52, in July 1826, he death was registered as Mrs White.  She wasn't of course, because Mr Wybrow was alive and still militarily active out in India. He went onto half-pay in 1828, was still alive in 1847 ... and I see a wee mention of a Mrs Wybrow accompanying him at one stage!

But I don't imagine he was related to our Willie. He just got in the way when I was looking.

Posted by GEROLSTEIN at 1:40 PM

Delighted to have your input over on

regarding our William. I have found looking into his family and business fascinating. I was thrilled to see that your research chimed so well with what I had found. Like you, I suspected some extra flamboyance with authorship in his published work. His adverts were not received without a degree of mockery as were his percocious daughters. While 'Sidney Waller' may have been a nomme de plume, Leander Zerbini was very much alive, if only for a brief period. He married an Eliza Banbury in 1829, was living King Street, Soho, had one child but appears to have died at 25 in 1833. He is buried in St Mary's churchyard in Bath and so another mystery there. To have his life celebrated says something about living fast and dying young.

I suspected also that His daughter Rhoda was never married to Vincent, the eminent lithographer, due to biblical disapproval of sisters and brother-in-laws. I've never found the record. I have often wondered at Rhoda's musical legacy. Her son describes her in his childhood as seemingly more concerned with housework than the guitar. I was heartedned also that Annie was not lost to the arts after her marriage to the silk merchant. I purchased a book of poetry, inscribed by herself, that is full of family reference. Sadly there is a great deal of melancholy and expressions of loss. It seems she was still close to her brother Sidney Hampden Waller Wybrow and his family - another story...