That nice bundle of old music produced enough interesting sheets to keep me busy for a good while. This one, from 1826, isn't exactly a rarity, but it poses the odd question which I'm not able to wholly solve from my Australian eyrie .. 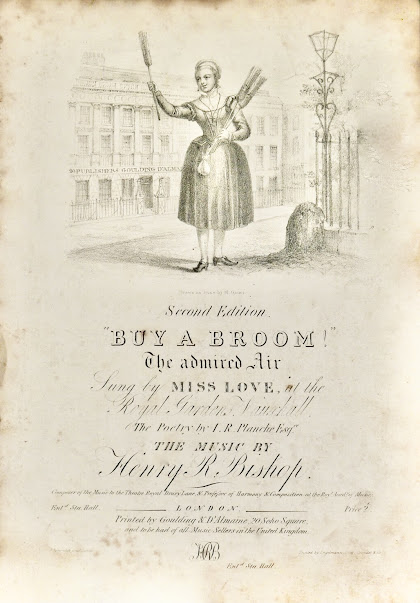 This is, as it says, a 'second edition'. Published in October. The first had sold out in the three months since the song had been introduced by Emma Love at the Vauxhall Gardens ...

You see what it says. Poetry by James Robinson Planché, music by Henry R Bishop. Well, here's the poetry ..

And the music? Composed by Bishop? Or arranged, as one paper averred 'on an old Germany melody'? Others spoke of 'Bishop's air'... but was it?

Anyway, contralto Emma Love, dressed as a vaguely Flemish/Netherlandish/Deutsch peasant girl, made an instant hit with the song down Vauxhall way ..

OK. Braham's song is 'arranged by G H Rodwell'. Emma's is specifically 'composed' by Bishop.
Emma sang her song (and others) to the end of the Vauxhall season ... 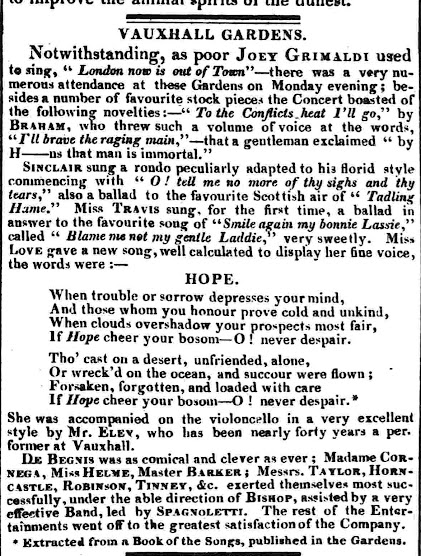 As you can see, Vauxhall was no second-rate organisation..  Braham, deBegnis, Sinclair, Deborah Travis, George Robinson of 'My Pretty Jane' fame ... Spagnoletti as leader, Bishop as conductor ... those were top names.
Now European broom-sellers, with their street cry 'buy a broom' were not a novel sight in England. Yates of the Adelphi had included an impersonation of one-such (male) in his Entertainment shortly before. But with the beauteous Miss Love, Planché's cute words, and a catchy tune ... suddenly these Mädchen were in the glamourised limelight ... It seemed everbody wanted to be a Bavarian Broom-seller. Fashionable fancy balls featured a host of Ladies in their guise, and little girls with mini-brooms thronged Sunday School teaparties ... Marie Antoinette and the milkmaids ..
The theatre world wasn't far behind. The Morning Post quickly published a 'version' said to be penned by a relation of the late Mrs Crouch of Drury Lane ..  The Horn version got itself published by T Williams of 2 Strand, but whether it was sung I know not 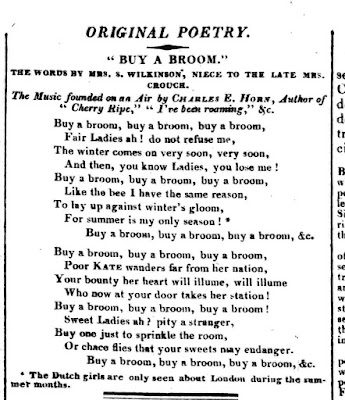 But while Emma took her song to Liverpool, interpolated into the 1805 musical farce The Weathercock (music: M P King), two other Bavarian broomgirls surfaced. And by no means of the least well-known variety.  Maria Foote (the future Countess of Harrington) exceedingly promptly interpolated a 'Buy a Broom' 'dressed in a foreign character' into her travelling Weathercock production in Birmingham .. 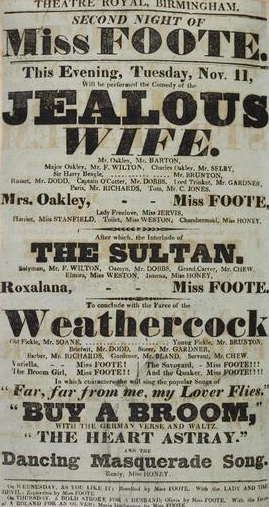 You would have imagined it was the same song as Miss Love's, but it appears not so. A surprised newspaper critic, in a town where Emma arrived after Maria, recorded that 'her 'Buy a broom' is totally different to the one sung by Miss Foote'. Totally?  So what was the Foote song ... one paper assured us it was the Bishop ...

Meanwhile, back in London, what must have been a third song of the title surfaced at the Haymarket Theatre. Sung by Eliza Vestris! This one was credited as being 'arranged and partly composed by Alexander Lee' ...and it was apparently sung for the first time on 18 September, at Liston's Benefit 'for this night only'. She repeated it at Farren's Benefit two nights later ... 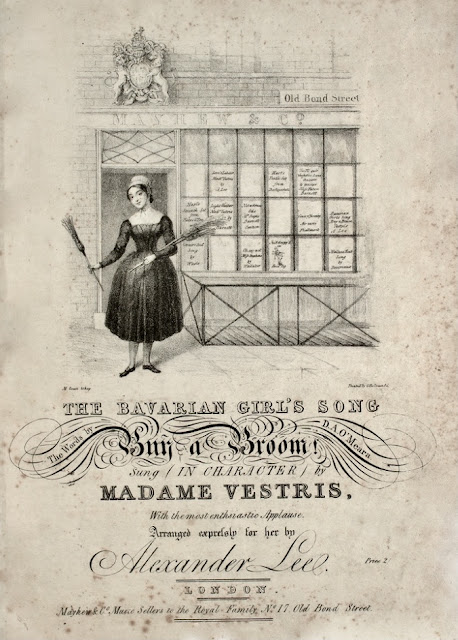 And in the meanwhile Weippert picked up 'the celebrated melody' for one of his Quadrilles ... alas, they don't say whose melody. If it was a celebrated old German tune, why hadn't it been used before ...?
Emma took her song 'in the garb of a Flemish peasant' around the provinces, sandwiched between such as My Native Land and Inkle and Yarico, even in classy concers with such as Caradori and Sapio, and even -- goodness gracious' -- at the Covent Garden oratorios ('inappropriate'), as others picked up her act.
Mrs Waylett in Ireland, Catherine Holdaway in Liverpool and Manchester ... yes, they picked up her act. But were they singing Bishop and Planché ... or Alexander Lee and ..  Well, it seems Catherine was doing the Vestris version 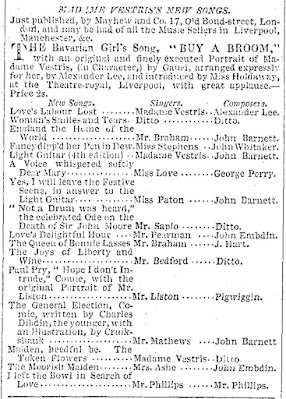 So, let's go back to the Lee version. Post-Bishop. Post Miss Foote? These are the words: 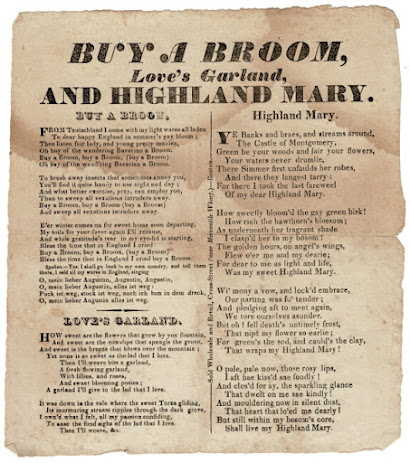 Written by ...? One copy of the piece printed in America credits 'D A O'Meara'. An American? No, indeed. Daniel A O'Meara was a striving British writer who had written, with Lee, the song 'Love's Labours Lost' for Vestris and the Haymarket. So I guess it was he. Ah! Yes, there he is among the curlicues on the London music!
And the music ...? It seems Lee's 'composed' bit consisted of the German tag and a waltz routine to follow. Which Miss Foote promptly appropriated ...  but surely he hadn't 'arranged' Bishop?

Now why does this copy have no credits at all?  Pirated? But that's the Vestris tune ..
And this one has, at least, pirated the art work if only 'colourably imitated' the song! 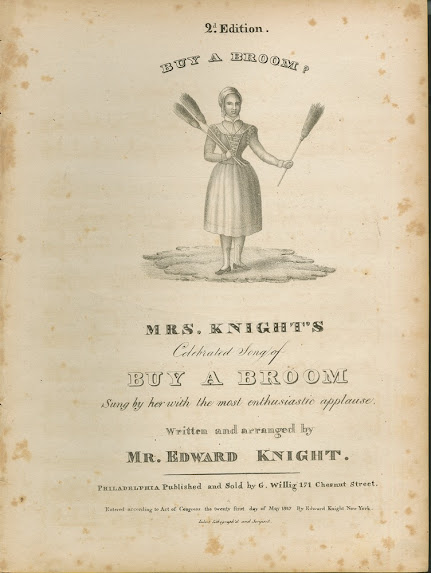 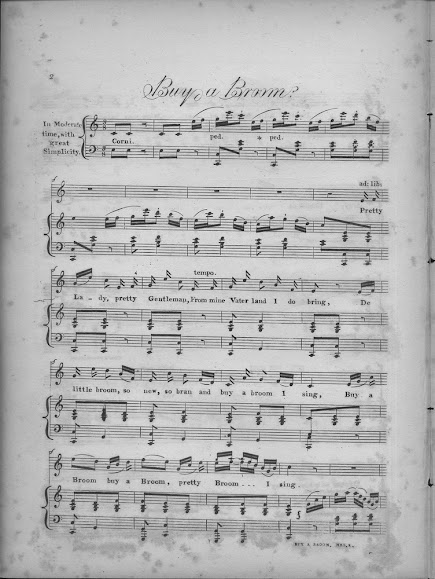 The story of "Buy a Broom" doesn't by any means end there.
Madame Vestris liked her song so much, that she had a play created by the dramatist Richard Brinsley Peake around her and it. The play was called The Hundred Poud Note (allegedy founded on an incident in the courtship of Mr Brougham and Miss Tree) and it found her the opportunity, in the role of Miss Arlington, to disguise herself as a comic Bavarianne and sing her song.  The provinces snapped the little play up, and with it the song.
While Miss Love was singing the song at Covent Garden, and Miss Foote was vulgarly advertising how much money she was being paid (doubtless on the old principle of I'll pay you 50L and tell the press it's 500L), other versions appeared. The Lee "Broom" was transmogrified into a duet 'as sung by Vestris and Liston) in which Liston frocked up, and which showed up in concerts and Benefits round the country. Vestris later performed it with her sister. 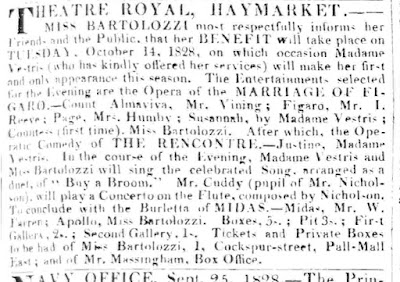 A Mr Henry performed it 'in character' in his illusionist entertainment Henry's Whims and Wonders, and the comedian Harley brought out a parody at his Benefit (29 May 1827). Emma sportingly sang her favourite number and Harley followed up with 'Buy a  Mop' in the character of a Southwarkonian
Needless to say he gave it on other such occasions thereafter, in town and country. And needless to say others tried their hand at using the popular song as a basis for songs of a different purpose 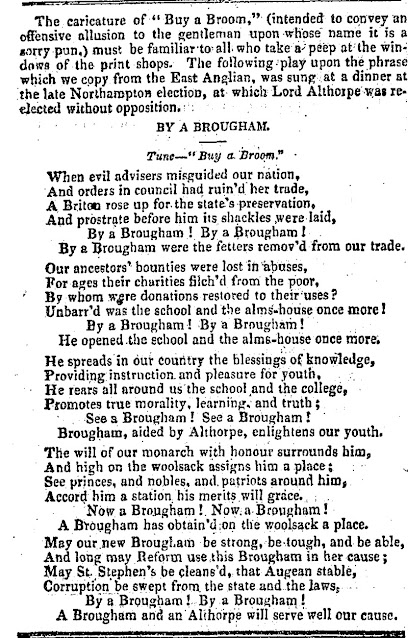 I think, at this period, the Lee version had taken supremacy. Emma Love had got herself into all sorts of a mess in her private life -- a 'secret' husband, then a not so secret aristocratic lover, at whose side she passed for more than a decade as the Countess of Harborough -- and faded from the theatrical scene.
But ... BOTH of them? 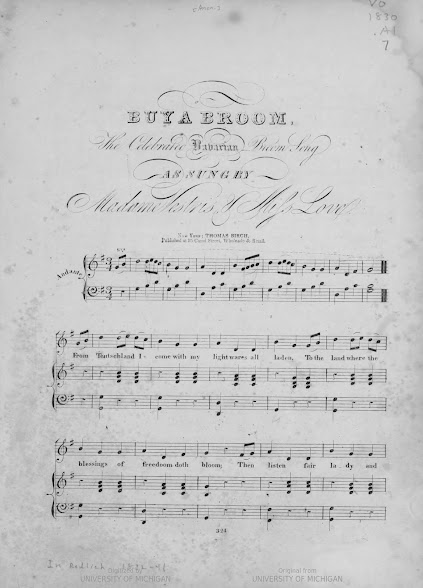 And I know this tune. It's the tune of 'Ach du lieber Augustin[e]'!  Bishop-Schmischoff!!! Flemish? Bavarian?  The melody is pure Viennese ...
Anyway, the song's popularity was rather dented as soon people came to realise at the Broom Girls were as much hoydens as hawkers ... one group (one of whom was a transvested man) was had up for highway robbery in deepest Wandsworth, others were involved in murder and other torts. In Whitechapel three girls, 'managed' by a Mr Jacobs, were had upon vagrancy charges. Fagin time. In Monmouth one such was arrrested for robbery. And the press railed in 1833 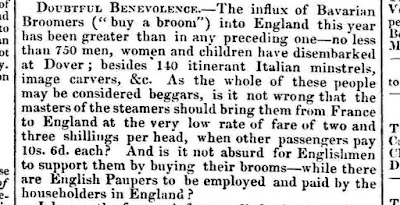 Broom Sellers were no longer so 'cute' and 'charming'. It was no longer entirely chic to go to milady's fancy ball dressed as a broom-seller ...
In 1851, The Hundred Pound Note was revived at the Adelphi, with Mary Keeley in the Vestris role. The Era reminisced on the days when 'the Bavarian broom-girl, represented after the Vestris fashion, was portrayed in pictures, and modelled in plaster all over the country that then resounded with the notes of the national melody that she had made so popular'. In 1851, the song went for nothing. Likewise the play. 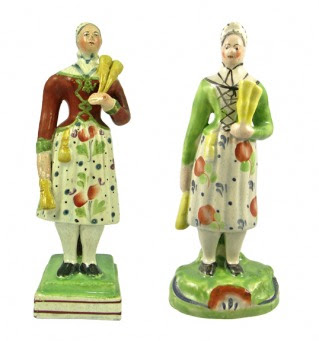 But the character -- or more accurately, the disguise -- of 'a Bavarian Broom-girl' had become a stock one, and it put in the odd theatrical appearance here and there for many years. The most notable was that by Mrs German Reed in William Brough's A Peculiar Family (1865). The Praeger family also sported a 'Bavarian Broom-Girl' comic song in their act in the 1870s, which was probably based on the same melody.
Of course, with a slight decalage of time, the hit of 1826 reached the colonies. America first. It was being advertised (along with Vestris's other hit 'Hurrah for the Bonnets of Blue') 'as sung by Miss Clary Fisher' as early as October 1827. She dressed as a Flemish peasant, so was she copying Emma or Eliza?
Seemingly introduced to  Australia by Cordelia Cameron circa 1834, it became decidedly popular, there, being sung in concert for many years, in its solo, duo and parody versions, and the title-phrase became long ingrained down-under, as it had elsewhere, in the slang of the times. From there the song voyaged to Patna and Dinapore and spots and eras beyond... 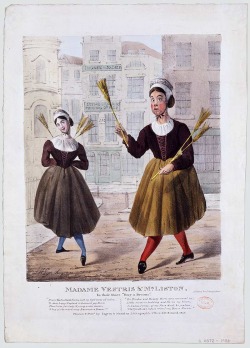 In 1969, I danced (believe it or not) on the London stage an Englishman's idea of a Schuhplattler to the strains of 'Buy a Broom' aka 'Ach, du lieber Augustin' ... 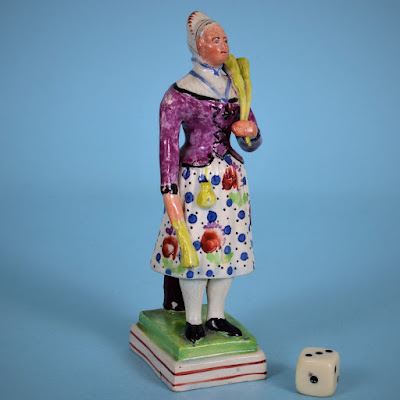