A theatrical photo gallery .... two artists from the cast Gaulois-Revue of the Théâtre Déjazet (1868). Two very different artists ... one the fun, the other the glamour!

Here in the lady (below) as Luciole, La Fée des Vers Luisants (Glow-worm fairy) who did duty for the magical business -- the pumpkin coach, a gown of pink satin -- in the Théâtre du Châtelet's production of Cendrillon (June 1866) 'féerie in 5 acts and 30 scenes by Clairville, Albert Monnier and Ernest Blum'. Marei Desclauzas (later Delphine Ugalde) was the prince, Irma Marié (later Mlle Luce) the heroine, Clarisse Miroy scored as Uranie de la Houspignolle (=the stepmother) .. 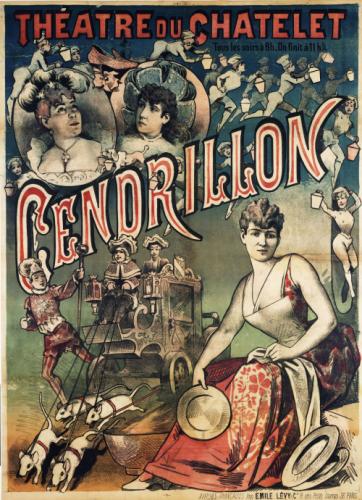 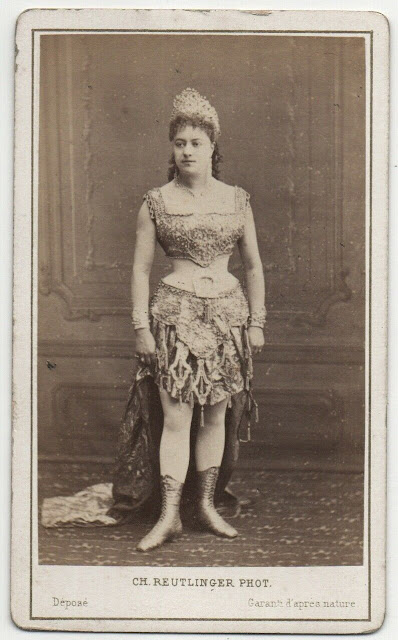 I don't know if this photo is from the same show. Mariani went on to play l'année 1867 in the 1866 revue Le diable boiteux, Samiel in Les Voyages de Gulliver and Le Poudre de Perlinpinpin She was loaned by the Châtelet to the Déjazet to create the title-role in Le Gaulois Revue, 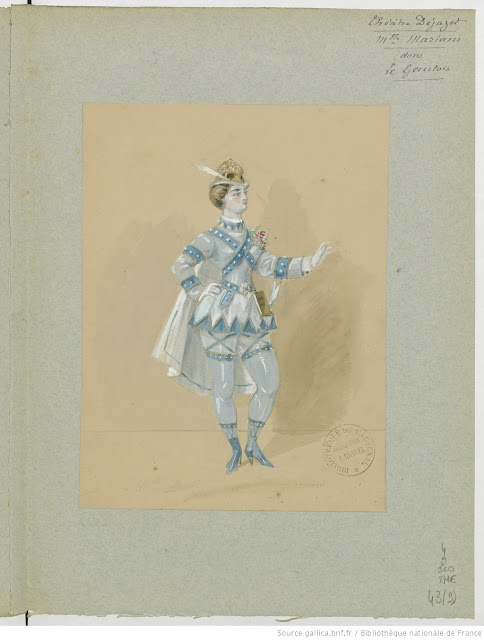 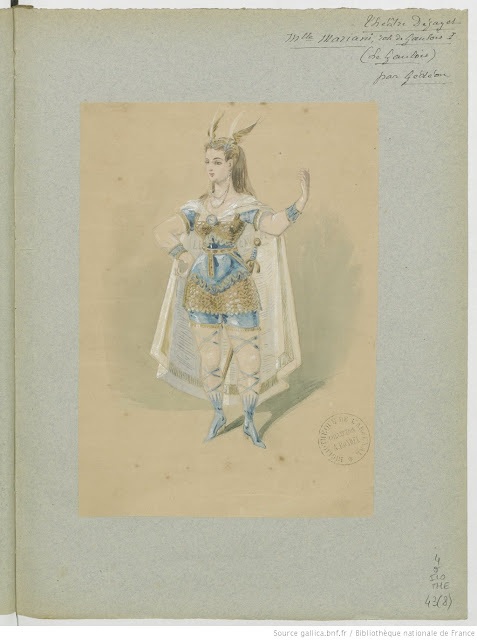 Nobody, reported the press, some years later, has pushed further than she near-nudity on the stage ... 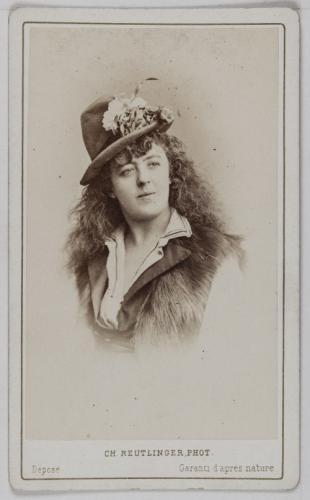 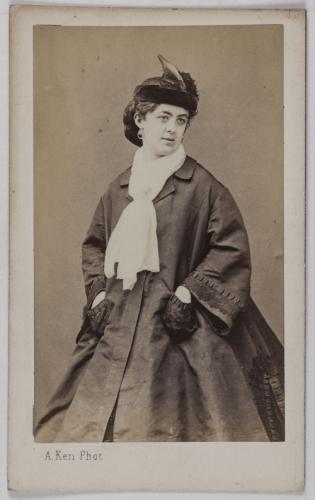 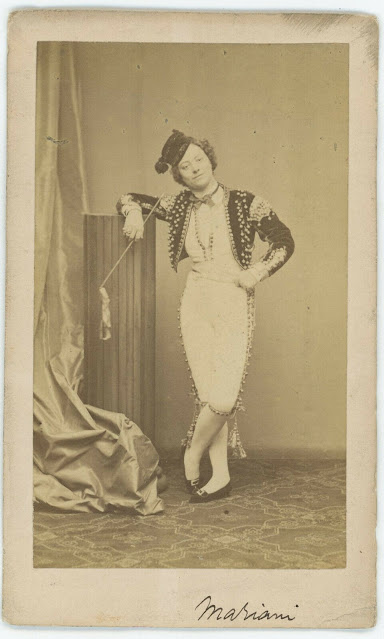 No one seems to have sorted out the who and when of Mlle Mariani. There are a number of photos of her for sale on the web (none 'nude'), but the posters have merely parroted meagre information. Some of them add 'cocotte'. Really, I wonder what Mons Mariani thought of that. Apparently there was a 'Mons'. And I don't suppose 'Mariani' was real. But there were so many of them. In France, already, a singer and a pianist, a mesmerist, in England there was a famous, tall beauty and undeniable cocotte (with a strong cockney accent!) showgirl, a veritable prima donna whose real name was Marion Sophia Hayne ...   anyway, ?Berthe apparently (going from other people's say-so) appeared at the Gaîté, at the Delassements-Comiques e tutti quanti ... 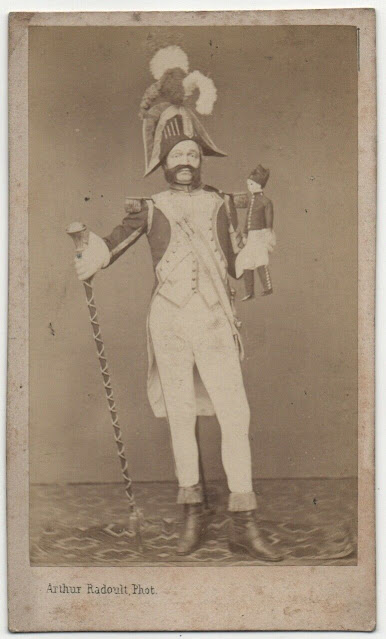 Victor Pierre Desiré Legrenay was born in Paris 27 April 1826, one of the large family of one Jean Nicolas Marin Baptiste Legrenay and his wife Suzanne Elisabeth Mortagne, and apprenticed to a locksmith. However, he quit his job to go on the stage. He wandered France in provincial theatres and fit-ups, until, in 1853, he was engaged at the suburban Théâtre de Belleville.

There he played Deshouilleurs in Sardou's popular play Monsieur Garât (1860), then running at the Théâtre Déjazet. And, as in all good stories, when the artist playing the role at the Déjazet was suddenly indisposed he was called into town.  His success was such that he remained at that theatre, playing comedy roles, with his googly eyes and skinny legs, from more than eight years. One of his burlesque roles was Romeo Monstraigus to the Juliette Crapulet of Mlle Boisgontier in a burlesque of Gounod's Roméo et Juliette, and the revues of the theatre (for which he became compère) gave him the opportunity to parody many others of the town's plays and players. 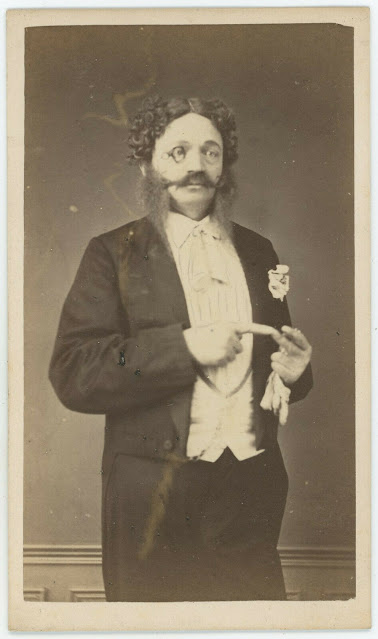 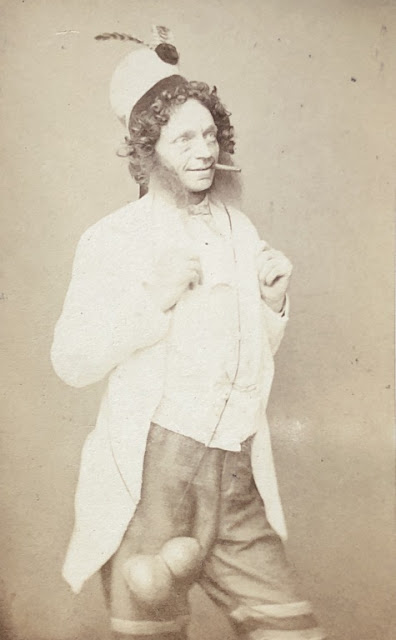 In 1869, he moved to the Théâtre de la Gaîte, where he was featured as Le Roi Mignonnet in La Chatte blanche, as Charles Martel (with a lantern on his head) 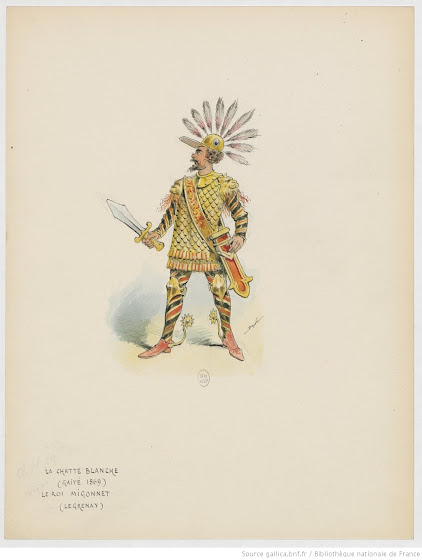 Over the next years he was much seen in the spectacular theatre -- the Gaîté, the Châtelet, the Ambigu, the Porte Saint-Martin -- in pieces such as Les Pilules du diable (Sottinez), La Faridondaine, as Parabase in the first production of Le Voyage dans la lune, in a revival of Geneviève de Brabant, Les Sept Châteaux du diable (Satan), the Brazilian Caramba in Le Voyage au Philadelphie (where he caricatured Offenbach), as the Chef des Carabiners in Les Brigands, he played the lead role of Hurluburlu in Cendrillon in the provinces, succeeded Guyon as Avaltoucru in Le Chat botté, and was much photographed.

The splendid photo of him with the doll is identified only by the word 'Châtelet'. What is it?, I wonder. I can't place it. He was only at that theater during 1873-6, before moving on to the Gaîté ...

After his period as a 'véritable roi de féeries' in the spectacular theatre, he carried on in comedy at the Folies-Dramatiques, the Vaudeville.

He died, aged 63, of bronchitis consequent upon an unnamed internal disease, at 132 Faubourg St Martin, 3 May 1889.

During his career, he appeared in London with the Déj́azet troupe, and in Belgium. He wrote comic lyrics and performed in the cafés-chansons, and at times worked as a florist. 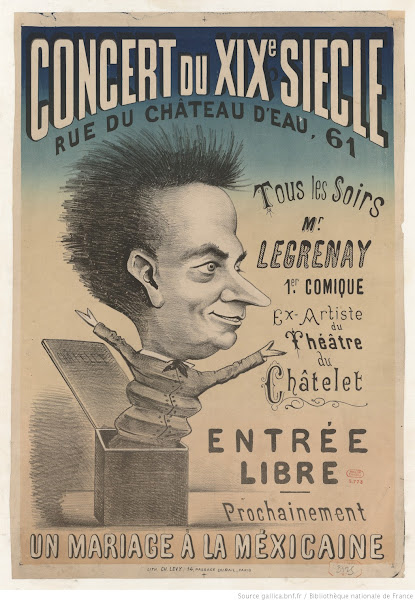 Married in 1862 (11 November) to Jeanne Augustine Chartier, he was the father of the rather odd Hippolyte Legrenay, who followed in his father's footsteps with some success. He committed a rather messy semi-suicide in his dressing room at the Cluny in his twenties, and died, soon after his wife, at 36.  Legrenay's second wife was the young actress Henriette Blancheteau.

These photos are of our actor in burlesque. At the Dej́azet?

Some simply give no clue 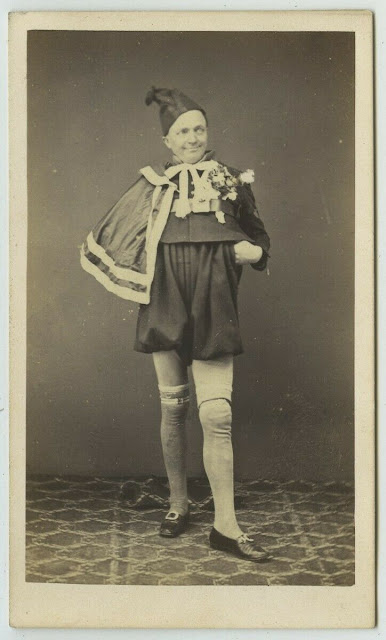 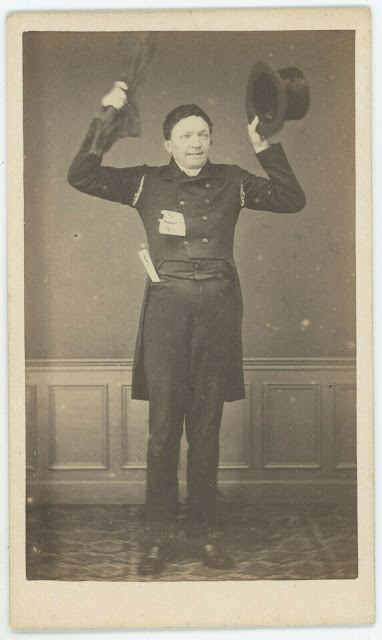 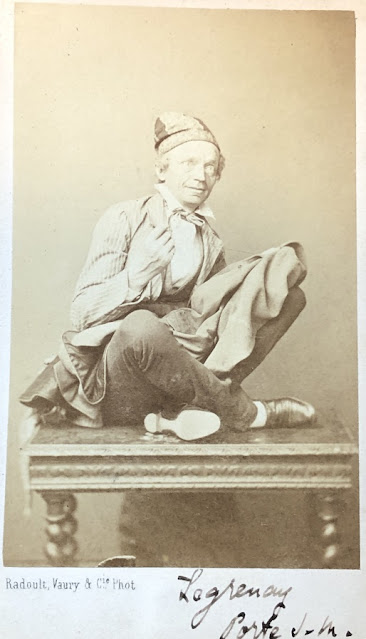 This one, of course, was not difficult. Une Noce en visite was a little burlesque of Une Visite de noce produced at the Alcazar 15 November 1871. Legrenay played the heroine Lydia de Morrencerf, Tissier was M Gobert. 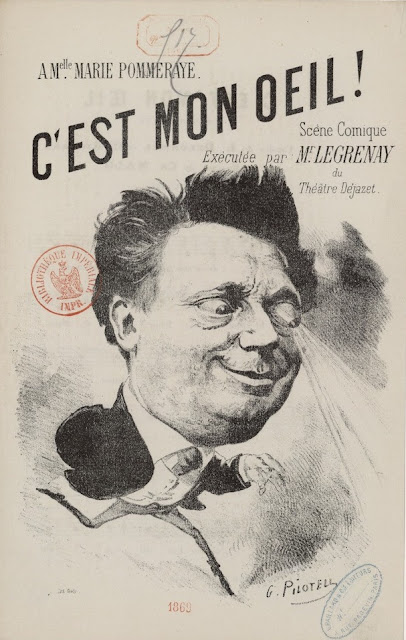 There is as much of and on Victor Legrenay around the place as there is little of Mlle Mariani .... but this is a start ...
and now its time for my nap ...
Posted by GEROLSTEIN at 9:54 PM