Yesterday, while I was investigating the statuesque Mlle Berthe Mariani, and her role as the fairy 'godmother' in Paris's 1866 Cendrillon, I came upon this little fellow, from the same cast ... 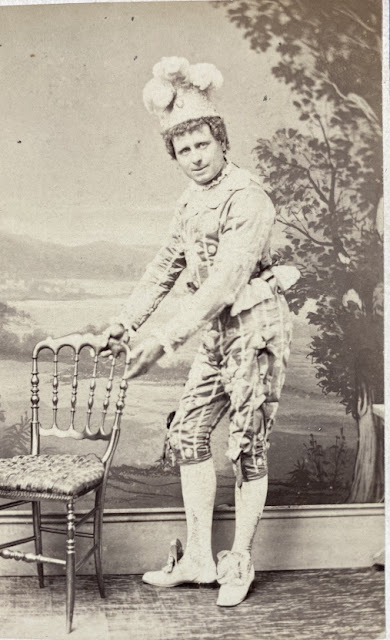 Now, who the deuce could he be?  I mean, we know that fairytales can get distorted for the purposes, particularly, of the spectacular theatre, but ...

Well, the photo is labelled TOUZÉ.  So I dug, and Mons Touzé played the role of Riquiqui. Not a character known to the English-language devotees of the tale.

So, I investigated. Both the show and the actor.

The show was written by Clairville, Alfred Monnier and Ernest Blum, and produced at the Châtelet on 4 June 1866. And both a detailed account of its twenty-seven scenes and the full script were published. 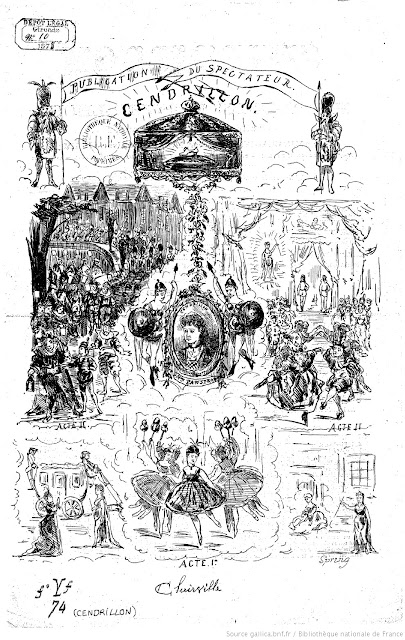 The bones of the familiar tale are all there, and the tale is deliciously treated in its opening Acts. We start with the marriage celebration of Conrad de la Pinchonnière (Ambroise) and the widowed Uranie de la Houspignolle (Clarisse Miroy) (plenty of festive song and dance) in the course of which the widow admits to being a mother of two: hyperactive Javotte and neurasthenic Madelon. Cowed Conrad admits, also, to having a daughter, Fleurette (Irma Marié)... and away we go.

Oh, Riquiqui? He is also part of the family. He is Conrad's schoolboyish godson, and he is very fond of Fleurette ...  until he sees Javotte!

Anyway, the fairy does the familiar act with the pumpkin and the mice and the 'pantoufle de verre' (I can't imagine how a pantoufle can be of glass, rather than 'vair', nor why one would go dancing in pantoufles, but ..), and Fleurette goes to the palatial ball, and wipes out the three Houspignolles and enchants the Prince Charmant (Marie Desclauzas), and loses her demi-footwear running away through a vast show of scenery ...

And then things get less familiar. Fleurette doesn't run home. Accompanied by the faithful Riquiqui, she rushes away into the scenery and they end up at an 'auberge diabolique' where they run into the genie of the montagne de feu (who makes glass slippers) and get into all sorts of a mess, until Mlle Mariani waves her wand and sorts them out.

In the meanwhile, plenty has been happening back at the Palace. The King (Lesueur), the seneschal and the Prince have summoned a thousand and one princesses from the monde entier to try the slipper. There were plenty of figurantes at the Châtelet, but to make up 1001 I think they must have done the old trick of all going round ten times with different hats. The slipper, actually, has a mind of its own, and it doesn't budge at the sight of all this beauty. And certainly not at the Houspignolles.

Finally, Charmant and Fleurette are transported to fairytale land, where all can end happily in lashings of decoration and ... a blaze of electric light!

The music was arranged and composed by Victor Chéri, and used music ranging from Nicolo's Cendrillon opera to Thérésa's popular 'C'est dans le nez que ça me chatouille'. Riquiqui sang a ditty to the tune of Béranger's Air des gueux.

Cendrillon was a decided success, was revived at the Châtelet and at the Porte Saint-Martin in the 1870s  and 1880s .. 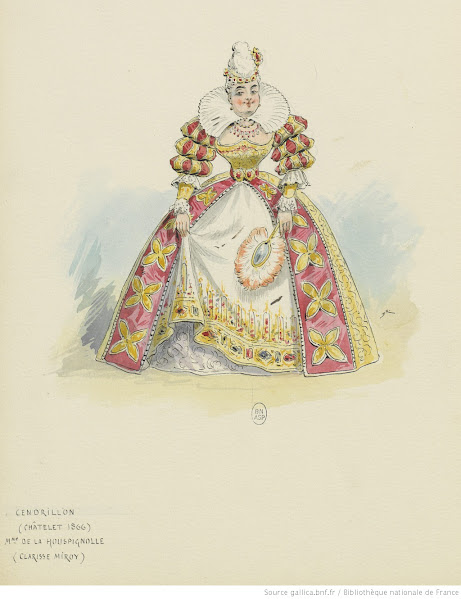 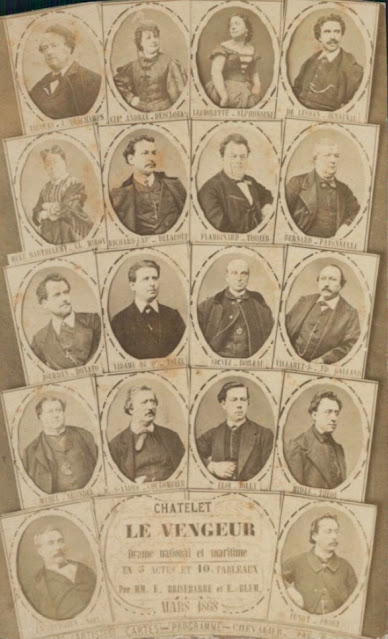 In the early 1870s he was seen at the Château d'Eau (Denis Giguet in Le Spectre de Patrick), the Gaîté, the Menus-Plaisirs (Tapuin in Les Princesses de la rampe), and in Brussels where he created the soon to be famous rôle of Trénitz in La Fille de Madame Angot, before he joined the company at the Odeon, as an actor and régisseur. At the 'second theatre français' he no longer played féeries, but Racine, Molière and, as at his beginnings at the Gymnase, Labiche.
During the 'sixties, he was a prominent membre of the Société des Beaux Arts, and it was said 'there is no fête worthy of its name which is enlivened by his comic chansonettes' ('Le bonnet d'âne', Le vieux braconnier').
He died at the age of 52, his wife Marie Louise Angèle Dutripon, having predeceased him, leaving two daughters Marie Eugène Maurice Clément Tousé (Mme Dumont) (b 14 November 1858) and Marie Gabrielle (Mme Ferdinand Jacques) (b July 1862). 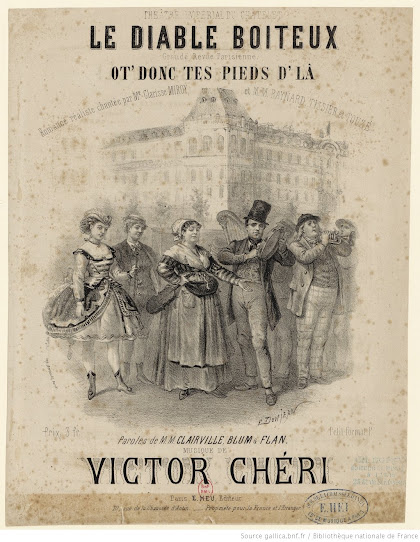 To be added to ...
PS (1) Ah! I see he owed his role in Cendrillon to fate. The part was intended for poor Colbrun, the Blaisinet of the Châtelet's Rothomago, but Colbrun was into his last illness and Touzé was given the character instead.
Posted by GEROLSTEIN at 3:56 AM