The photo box: Tons of toffs!

.
I have to clear my desktop of the gentry of olde Englande .. 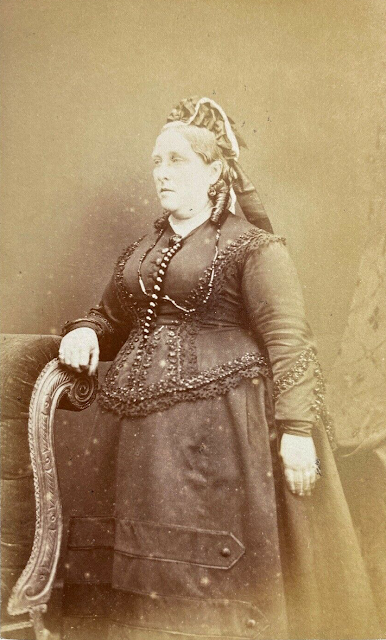 Louisa Jane LAYARD (b Uffington 17 July 1823; d The Hollies, Tunbridge Wells 9 May 1913), daughter of the Rev Brownlow Villiers Layard MA (b 19 January 1779; d Wembley 26 March 1861) of Uffington, Boulogne-sur-mer, then Wimbley, and his (second) wife Sarah Jane née Margary. Louisa Jane, it seems, married a cousin, Henry Joshua MAGARY (b Hornchurch x 22 August 1811; d Weston super Mare 21 January 1876), a Major General in the Royal Engineers. That employ meant that he spent years on India, and later in Ireland as well as, sometime, at home in Kensington.
If you think that Louisa looks a little stout and tired, there is a reason. She gave birth to sixteen children, fourteen of whom surivived, and eleven of whom can be seen, with their parents, in Kensington in the 1911 census. The most memorable amongst them was Augustus Raymond Margary of the British Consular Services who was murdered in Man You, China, 21 February 1875. 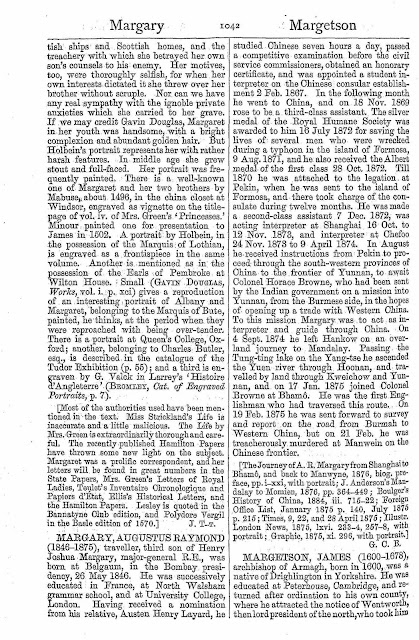 The grand photo of Sabine Thellusson which I deciphered in my last came from a dealer named 'nageit1'. So I visited his shop, to see if there were more like her. Were there! She has come from an album which has been defoliated, but otherwise unharmed, and all the photos have been separated, which is s shame becuase they make a wonderful group. I realised quickly that all the friends and relations that were included in the album were of the same social stratum as Sabine. Titled, untitled, gentry, wealthy, ex-wealthy, town & country folk. There were however a couple of problems. Firstly, the handwriting of the clearly very elderly person who had scribbled the names on the mounts of the photos, mostly seeming to date from the early 1860s, is execrable. Second: when you HAVE deciphered it, or think you have, some of the captions are incomprehensible. 'Mr Turner', 'Miss Woodhouse'. But I've scored with some, and here come the first ones:

Isabel Bridgeman got done first, because  she had a whole, easily readable, name. 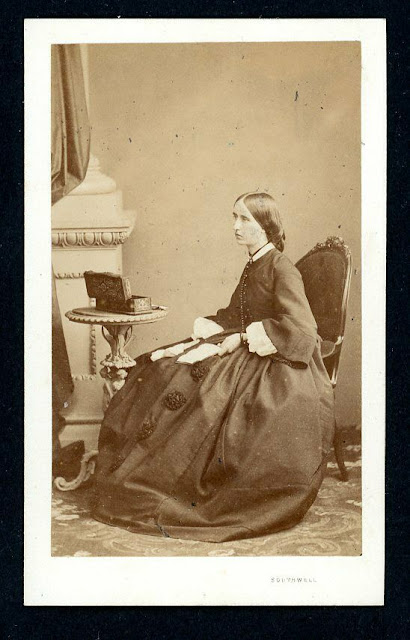 Charlotte Sobieski Isabella BRIDGEMAN (b Knockin, Shrops x 24 May 1835; d Hartley Wintney 13 July 1914). Daughter of Hon Capt [Charles] Orlando Bridgeman (later Vice-Admiral, b Derbyshire 5 February 1791; d Knockin 13 April 1860) and his wife Eliza Caroline née Chamberlain ... but, enough. Isabel makes her way, with lashings of family, to one of those books about 'descendants of Edward IV and Henry VIII' (which doesn't account for the Sobieski) and I'm not going there ...! 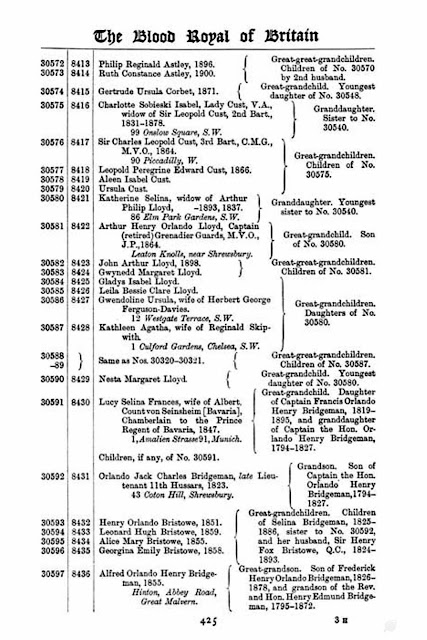 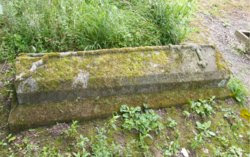 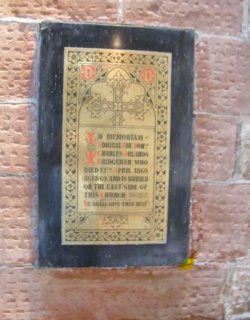 And (obligatorily) bred ... all of which is recounted in the Blood Royal books. Without a picture of the lady ...

Next the photo of 'Mrs Daniel Chandos née Poole'. 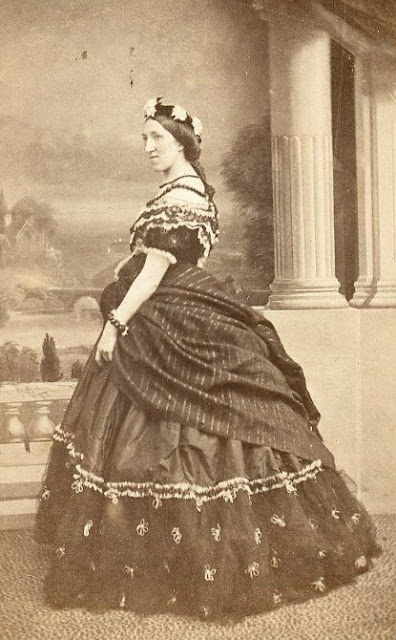 Took a while to untangle that one! But even I have heard the name Chandos-Pole (I always thought it sounded like something to dance around) and I ultimately found my way to Millicent Chandos POLE (b Radbourne Hall x 21 June 1821; d Brentwood 1907) one of the ten children of Edward Sachaverel Chandos Pole and his wife Maria Wilmot. Millicent married wine merchant Maximilan August[e] Dremel ('Dremel and Kniep') (b Germany; d The Warren. Strawberry Hill, Twickenham 14 April 1904), so it wasn't Daniel it was Dremel. It may have even got transcribed by our old collector as Dreymill .. 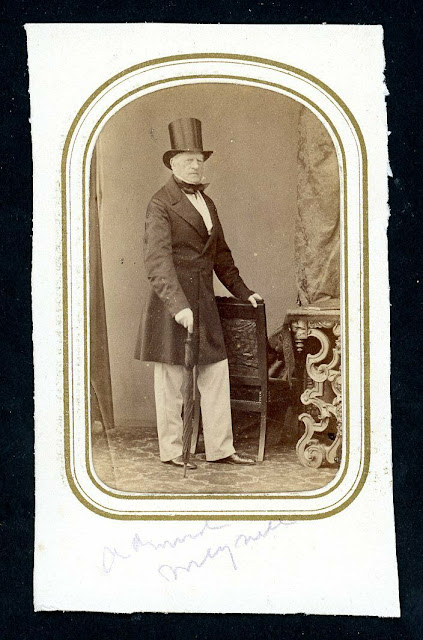 They were married in Dremel's home town of Aachen/Aix-la-Chapelle) and their first children were born in Germany, but they returned home and settled comfortably in Chelsea, although Mrs Dremel had to make do with rather less than the 16 servants at Radbourne Hall. They lived in fine social cirumstances, and the names of Mrs Dremel and Miss [Anna Helena] Millicent Dremel appear (just occasionally with Mr) in garden parties, balls et al listed not too far below the titled folk. They were also on hand for weddings, funerals and anything to do with the extended Wilmot family and the Pole family.
It appears that mother became a good friend of Mrs Sullivan, whose son Arthur composed music. Youngest son Charles Henry, stricken with the tuberculosis which would kill him at 24, kept a diary which, recently, came up for sale on the internet, and their social engagements are therein recorded ... 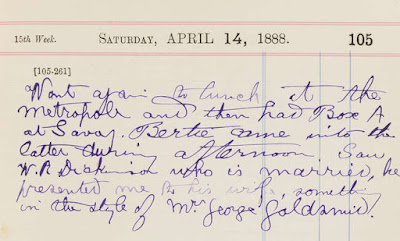 Augustus died in 1904, Millicent in 1907. Daughter Millicent lived, unmarried, to the age of 80 (d Cromwell Hotel, Kensington 15 August 1935), Captain Sidney [John Reginald] wed and bred and died 18 December 1923, and eldest son [William] Lewis [Augustus] seems to have died in 1908. But, in their day, Mrs and Miss Dremel were shining starlets of society.

I am rather proud of my cryptographic talents in the next case. And my piecing together of the who and which and when ...  This family seems to have been a favourite of our collector, for there are no less that four photos of the Madocks girls. Yes, Madocks with one 'd'. 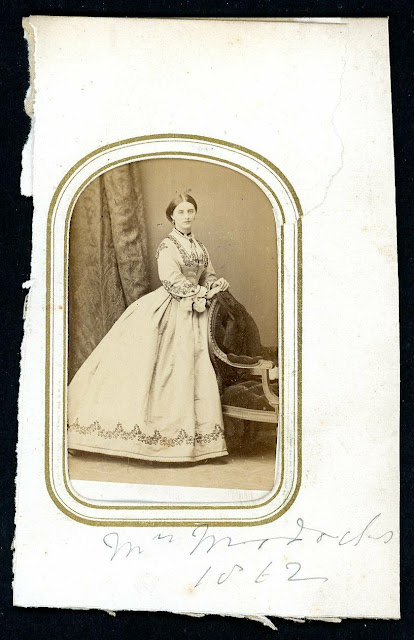 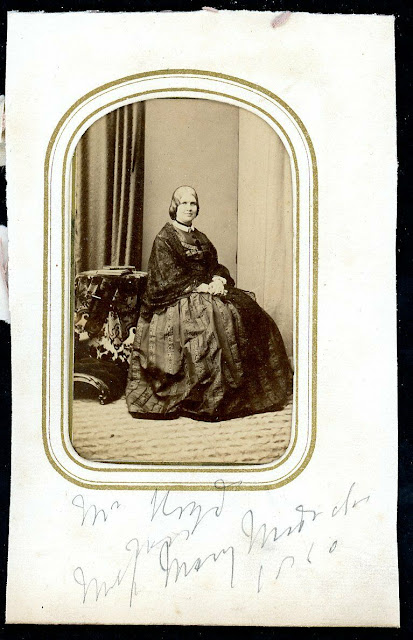 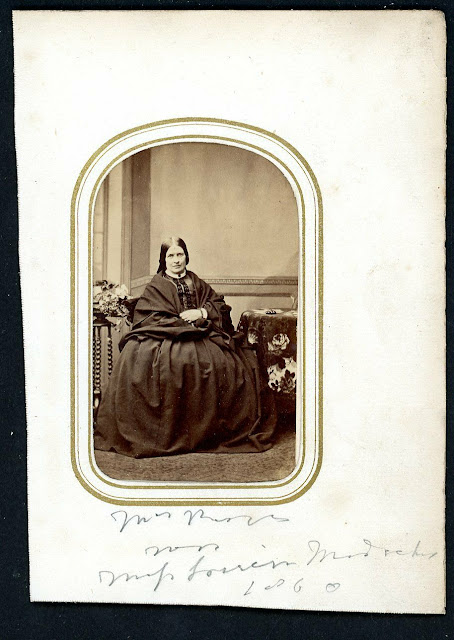 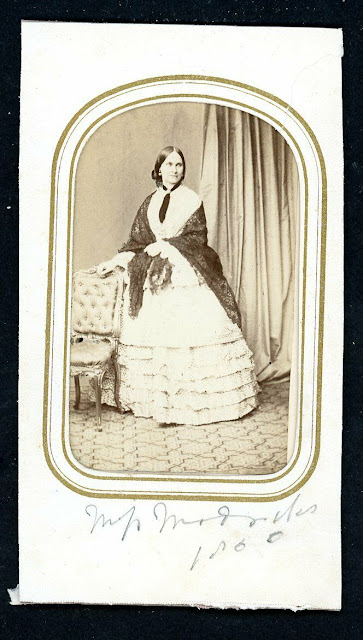 Well, there was a bunch of Madocks girls. Mary Eliza (Mrs Lloyd), Louisa George (Mrs Rose), Emily Charlotte (Mrs Beech), Sidney Frances, Sophy Caroline (Mrs Bland). They were the daughters of John Edward Madocks of Fron-Iw and Glan Y Wern Hall, Llandyrnog (1786-1837) and his wife Sidney née Robarts. Mr Madocks bought himself commissions in the army, but his real raison d'être was as a country gentleman ... I see that in 1851 the widowed Sidney and Mary Eliza are at home with twelve indoor servants to care for them.. 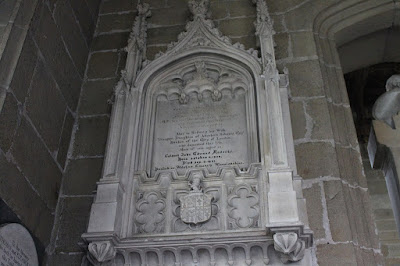 So, who are the ladies in our 1860s pictures. Mama Sidney had died (Gresford 25 May 1852), so the scribbles all say 'Miss' not 'Mrs'. Well, number two picture is Mary Eliza, and number three is Louisa (who would have calligraphically guessed that was 'Mrs Rose'). The other two are just 'Miss'. Well, by 1860, poor Sophy, who had married a wealthy Yorkshire landowner, was dead (aged 30), Emily was well and truly a wife and other, and the only 'Miss' remaining was Sidney Frances. In 1861 she was alone at Glan Y Wern Hall (with 6 servants). Is it she? And the top one. Surely that says Mrs. But the resemblance ...

While trying to decipher 'Mrs Lloyd' I happed upon another Lloyd in the collection. Ah ha! I presumed. Husband! But he wasn 't ... 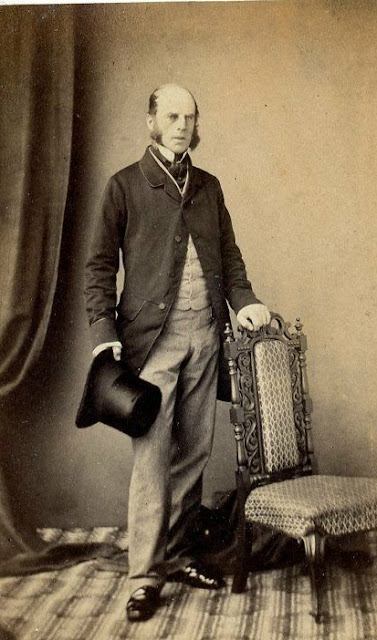 He is Llewellyn Loyd or Lloyd. After the one 'd' in Madocks, I'm not assuming that there can't be one 'l' in Loyd. But if there are two, could this be E H Llewellyn LLOYD (27 July 1792-17 February 1876), naturalist. I mean, he might have been just a bird man, but he was gentry. And you have to be, to get in this photo collection. On the other hand, there is a Llewellyn LOYD Esq of Pontriffith in the 1840s, and a military one who died in the Zulu Wars (1881), defending the Prince Imperial. There's one in 1890 happy-wedding-day-ing a Miss Townley at Fulbourne in 1890 (a claret jug was, I feel, the Victorian equivalent of a toaster as a gift), and in 1891 inheriting largely from an uncle, Lewis Loyd .. 1891? hmm. A bit late, I feel ... none of them seems quite to fit, but I think we have to punt on Loyd rather than Lloyd ..

Postscriptum: And here, deeper in the box is 'Mrs Loyd' 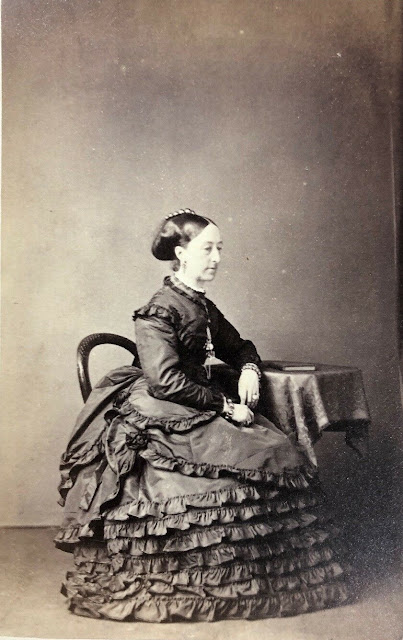 OK, one more, then early night. I was up at dawn this morning, because our first post-fishflu market was starting up again and goodies were calling ...

There were two Vivians, so I thought kill two flies with one swat. And sure enough, the first one, just inscribed Vivian, is Lord Vivian. 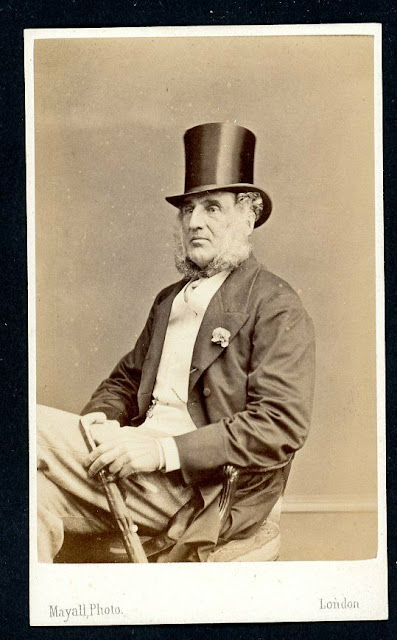 The other is a Miss Vivian .. photographed at Bodmin ... why the walking stick, and the shy angle. Is she an invlid? Or disfigured. Or just being arty. 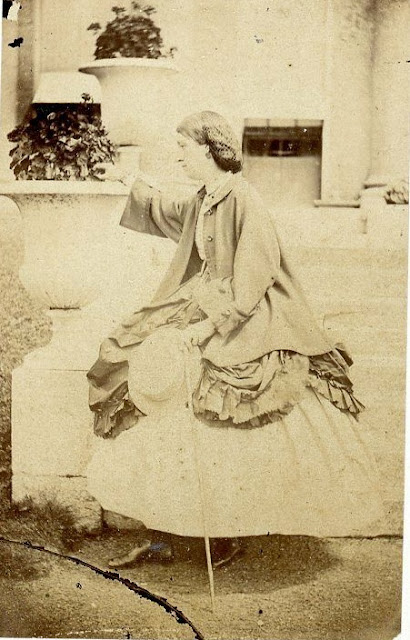 Well, I sussed it. Because there is another scribbled hint on the mount. She is Mrs Trunisigen. Out with my Linear B dictionary, which tells me Trunisigen is spelled Tremayne. So! This is Mary Charlotte Martha VIVIAN (b Pentreath, Anglesey 13 October 1842; d Mount Tryon, Torquay 30 October 1917), second daughter of the second Baron [Charles Crespigny] Vivian, who I guess is the chappie above. Unless he's the 3rd Baron ... So Miss V married John Tremayne 'magistrate and landowner' at Bodmin 20 October 1860. We see them in 1861 living with papa ('Lord Lieuenant of Cornwall, Peer of the Realm'), and seventeen (is that a record?) servants ... by 1871 (Heligan, St Eve's Cornwall) they have four children, some high-class visitors and ... 22 servants, gamekeeper, gardener, coachman ...!
I see that Heligan was the ancestral home of the Tremaynes, built originally in 1603. And I see that from the iconoclastic 1970s it has become flats. Oh well, that's better than the fate of Glan Y Wern, which became a prison and a lunatic asylum. But, think, that's 25 workers out of a job. No? No. Because the 200 acres of the gardens of Heligan House have been restored, under the kitschy (I mean catchy) title of The Lost Gardens of Heligan ... I wonder if they have a portrait of Miss Vivian ... 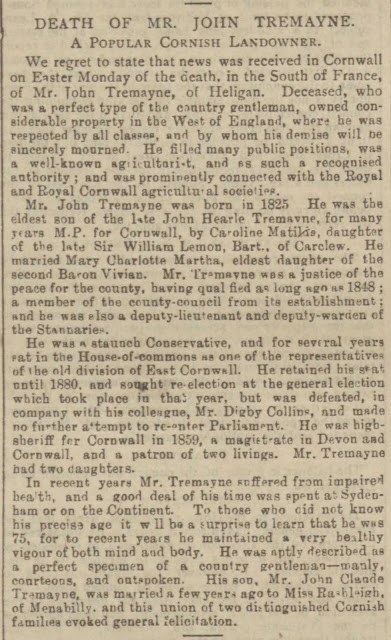 I have lost my battle to identify 'Mrs Granville née Melluson?', having been led down a duff path to Stratford-on-Avon, so will sign off tonight and tackle another swathe of gentry tomorrow ... 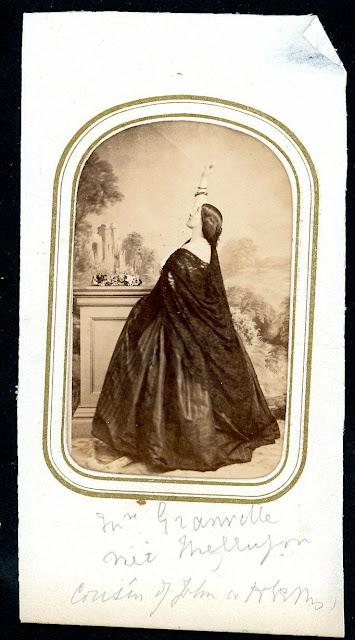 Posted by GEROLSTEIN at 3:07 AM

Greetings from Canada Kurt....Thank you for the great picture and write up for Louisa Jane Layard...my 1st cousin 4x removed. I have pictures and info re her son Augustus Raymond -Margary 1846-1875. He certainly lived an adventurous life in only 28 years! Interestingly, she was also 1st cousin to Sir Henry Austen Layard 1817-1894 http://digital.nls.uk/jma/who/layard/index.html

You are here: John Murray Archive › Who's who › Sir Henry Austen Layard

Sir Austen Henry Layard had a varied career as a traveller, art historian, draughtsman, collector, author and diplomat. He was also famed as an archaeologist due to his excavation of ancient cities in Iraq.

Jane, that is EXACTLY what I hoped would happen when I posted these delvings!

Get those photos back to the families...

Really appreciate your work.....as I am sure so many others do also....friend in England contacted me last night when he saw the Layard name as he knows I research this family! Really interesting the source you mention, as I had wondered how it fell "onto your desk top". Is it possible that you have dealt with other Layards....can the archives be "searched" I did not see that option? One in particular, Charles Edward Layard and his wife Barbara Brigetina Mooyart had 26 children, 22 of whom lived to adulthood, so you can understand there are Layards all over the world!
Stay safe and stay well
Best
Jane