.
The world of showbiz biography is strewn with lies. Not just journalists' and publicist's lies ('oh, well, it makes a good story'), too many of which have become, in the hands of later writers, 'history', but lies invented by actors and actresses themselves -- ranging through name, age, achievement, background, even occasionally sex. Of course, it is harder to falsify personal facts today, when the big-brotherly governments of the world have us all, alive or dead, minutely documented, but in the Victorian age, well, a chap could get away with many perversions of the truth. And did.

I am motivated to this animadversion but today's (yes, the entire day!) bit of Cartesian 'Letter H' delving. Actually, it ended up being a Cartesian Letter H double whammy ...

In the early decades of this century, there lived, in various Californian towns in turn, an ageing vocal teacher by the name of Charles ka Patrick Hildesley ('The Hildesley Vocal Studio 1069 Broadway, Room 12, Oakland, Cal') with his wife, Annie. Patrick or Charles said he came, sometimes, from Ireland, sometimes from Hampstead, and he gave his birth-date at 1861. Ish. He was factually born in London, at 80 Seymour Street, 24 November 1850, as Charles Thomas James HILDESLEY, the second of the numerous children of Thomas Hildesley, woodcarver (d 22 February 1878), and his wife Rose Ann née Reardon, a lace cleaner

Their brood would disperse to Denmark, Australia, America ...

Charles, in 1871 is 'a clerk in a railway clearing house', but he was already into music. I see him listed on his daughter's birth certificate as 'chorister', and he would later advertise that he had been a choirboy at St Andrews, Wells Street 'under Joseph Barnby', and at the Temple Church. With much corroborative detail. And he did not lie, as this 1871 clipping shows: 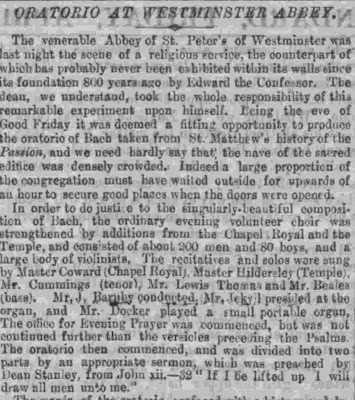 'Master' and a treble still at twenty years of age? Maybe a falsetto alto.

At 25, he married, Emma Josephine Wade (stll professing 'chorister', but evidently not a treble), and in 1876 fathered his first daughter, Emma Rose Wade Hildesley. In 1881, he is mine host of the White Horse Inn (!) in the Market Place in Brentford. But by 1884 (maybe sooner) he has turned back into a singer, as a member of the Savoy company. He was to spend some five years with the Carte companies, with an afternon off to sing in Richard Temple's Rigoletto, and including the Continental voyage ... a voyage which was to put an end to his marriage. 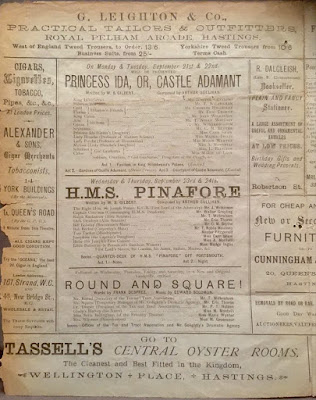 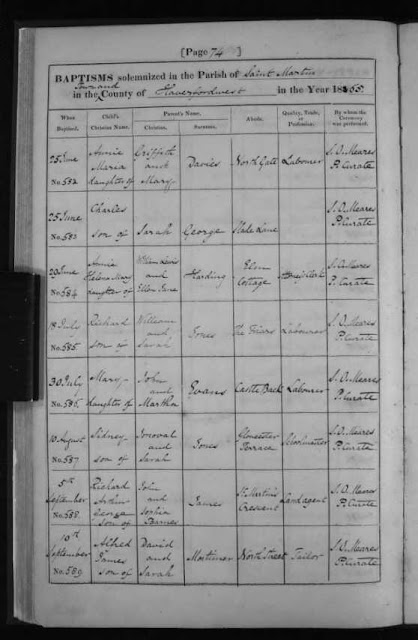 The two connubed, and the result was a little Ethel Hawkes Hildesley (x Ladywood 7 December 1887). 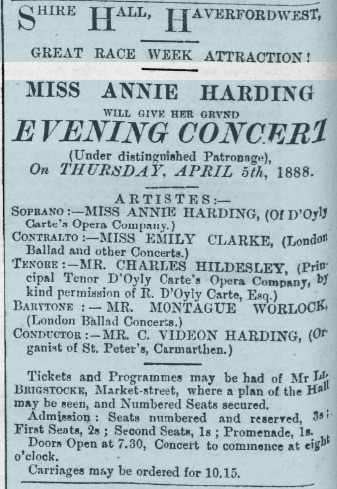 Annie evidently had no illusions about the relationship; in 1890 (while she was still Carte-ing) she married one William Lewis Hogarth, from Abderdeen, back home in Haverfordwest, put an end to her singing career, and began producing small Hogarths ...

After the end of his Carte days, Charles went on the variety stage, at the Empire, Leicester Square, sang in concerts in Scotland, appeared with Fred Vokes Company and took part in the provincial musical comedy In Summer Days (1891). During the tour of that show, the census man came a-knocking and Colin Coop, Charles Hildesley and Elsie Hildesley (wife) from Wigley, Notts were recorded sharing digs. I have tried to identify Elsie -- after all how many chorus girls come from Wigley -- but she was evidently a very temporary 'wife'. The real Mrs Hildesley was back in London with teenaged Emma 'waitress in a coffee house' and her second daughter, Alfreda Josephine, for the moment still tagging herself as 'married'. Annie, the previous temporary wife, was Hogarthing. He continued in variety in 1892, introducing opereetas such as The Rose of Auvergne or The Blind Beggars into the programmes, appeared as Robin Hood in Maid Marian, toured with a quartet in the drama The Still Alarm, and then fulfilled a good run with a Fun on the Bristol troupe. In 1895 he was appointed stage director at the Liverpool Alexandra, in 1897 I see him at the Belfast Grand Opera House, and then he was gone. Sailed away. Alone? Maybe, maybe not. And why?

He appeard in a couple of American musicals (The Koreans, The Three Dragoons) and I next spot him in dig at New York's 7th Avenue (1900). And guess what, he has another wife! And she says she's named Annie too! And an English-born actress. And he (or his landlady) claims that they've been married ten years, with no children, and immigrated 3 years ago. Well, its evidently not Annie Harding. It can only be the latest temporary wife ...

The New York experience fizzled out after six years and Charles headed for California. He seemingly settled first in San Jose, proved fine meat for local journalists ('choirboy kissed by Queen [Alexandra]'), gave concerts, taught singing and found ... goodness, another wife! And she's named ... Annie! Miss Annie Perry of San Jose, daughter of Portuguese fish-peddler William Perry ... she billed herself over the years that followed as Mrs Annie P Perry: I wonder if she knew clarification was necessary, or if it were just the American middle-initial fashion. Charles also took up his old job in church music. I see him in 1903 at the Presbyterian Church of Santa Barbara, and at St Dominic's, in 1904 'Charles Hildesley formerly leading tenor (!) of the Temple Church, London, has been appointed choirmaster of the Church of the Advent, East Oakland, and is concertising at the British-American Union. I see his name mentioned as playing Nanki Poo somewhere in 1906, and as 'having staged many productions of comic opera', and in 1908 ..  Anyway, he settled down as a vocal teacher (Annie was an amateur soprano and sometimes helped out) and Yogi in Franklin Street, Oakland ('Hildesley teaches his pupils to breathe like a Yogi that they may cadenza better') and after a few frasques (he went missing, with much publicity, in 1908) ... settled down at last.
When he died, in 1921, there was just one more fib: 'Original Nanki Poo in opera Mikado is dead'

Settled down? Even in the grave Charles had wife problems ... 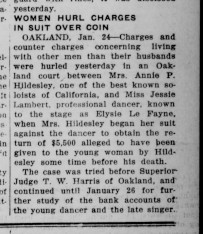 Annie wasn't the daughter of a 'marchand de marée' for nothing. And she had put up with C T J Hildesley for nearly twenty years ... I hope she won! Annie lived on in California, latterly with her sister Isabelle, widow of Paul Maggi of Maggi's Restaurant, and died in 1946.

I have briefly followed up the Hildesley children. The two legitimate girls and Annie Harding's one. Ethel is unfidable between her birth and death, but apparently became a Mrs George Shaw, and died at Eastbourne 6 November 1951. A legal search was instigated to find her relations, with no result. Chuckle, I have done better! Emma Rose married Henry Edward Rayner (1894 'father, actor, deceased') and I last see her in 1911 ('Rose Rayner'). Henry is a newspaper delivery man, and they have three surviving sons. Alfreda Josephine, born in happy Savoy days (22 December 1884), duly had her premarital child, married Richard Best in 1912 ('father deceased'), and died, aged 73, in 1958.  Their mother can be seen, aged 60, living alone in one room in Walworth, plying a needle for a living. She died, in 1928, aged 77.

Enough. Some pretty chaotic lives in there. But send two Cartesians to the Continent and what do you expect ... still, Charles and Annie I were a fairly brief episode in each other's lives .. and, look, I've biogged two Hs with one blow ...

Thought: I wonder what Geraldine St Maur got up to on the European trip ...

Posted by GEROLSTEIN at 4:58 AM