.
I got stuck in the photos today, and didn't make it back to D'Oyly Carteland ... and what a mixed bunch I turned up ... Without further ado .. 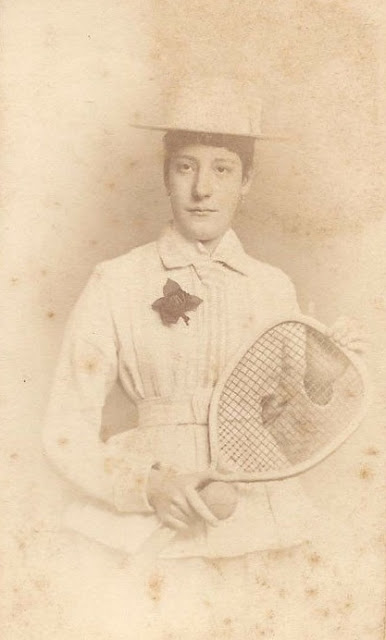 Although living in Soho, father was a native of Kendal, where this photo was taken, so it seems as if Alice was on holiday. Witness the props. By 1891, father has become a hosier and haberdasher and the Bradleys are living in Ashchurch Terrace, Hammersmith. By 1901 Louisa is a widow, and Alice, knocking thirty, is ogling the shelf. But in 1908 she married widower John Garnham Mumford, tailor's cutter, and on 9 January 1909, at 10 Disraeli Rd, gave birth to John William Mumford. Mr Mumford went on to become an 'outfitter'. He died in 1926. Alice in 1933, leaving 5747L. 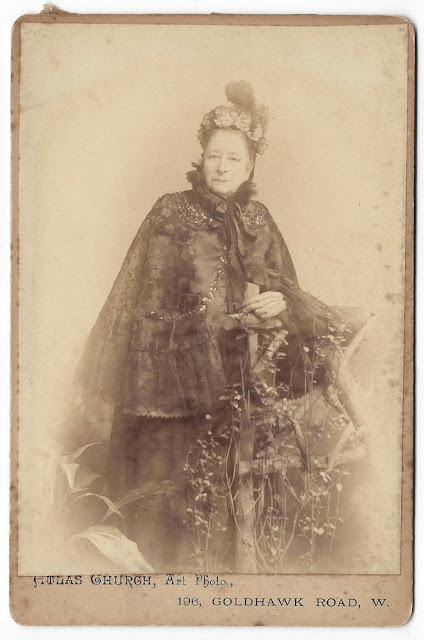 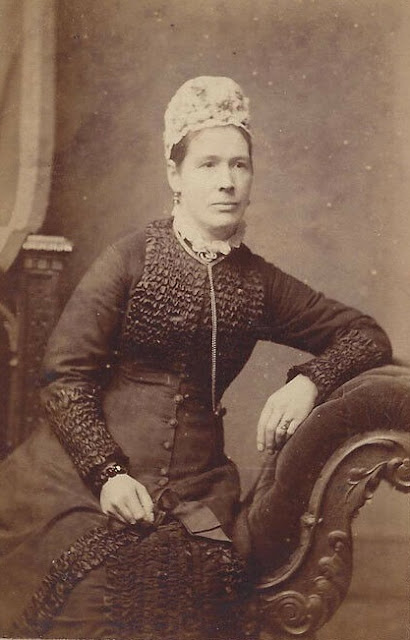 Sudbury, eh. I guess she belongs with my last episode.
Father was a fairly consequent farmer at Apsey Green '183 acres, employing six men' and, in 1851, the family -- Dorothy, Emily, Celia, Wyard, Harold, Alice, Wheatly G -- also employed a governess and four indoor servants. By 1861, the children count was down to four, and the servants down to a dairymaid and a carter. Two years later, Celia married Sam Hunt, chemist, and the couple moved from Suffolk down to Norwood and Egham where they lived with Sam's brother, draper William, and where Sam plied his trade as a chemist and druggist. He also devoted himself to fatherhood, and 11 June 1865 Edward Caesar Hunt was born, followed by Edith Elizabeth, Ethel Mary, Constance Evelyn, Gertrude Celia, Mildred Christina, Wilfred Samuel, Hannah Elsie, Annie Emily .. 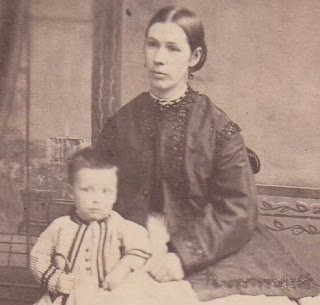 This, courtesy of the family historians, is Celia with her firstborn. As it this, of husband Sam ... 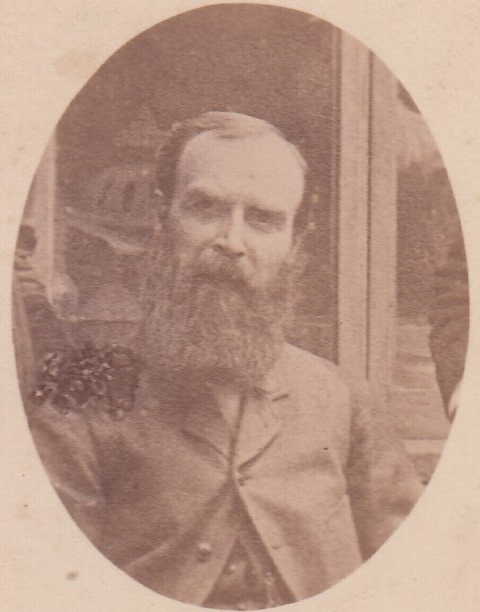 Sam died in 1884 (4 April) at Sudbury, and by 1891 Celia has just 6-year-old Annie at home with her. Eldest son Edward has emigrated to Arkansas, and the other five girls ..  For her older age, Celia moved to 'Cragside' in Felixstowe. Edith and Hannah had died, Mildred was to follow in 1909. Wilfred was killed at Gallipoli, and less than a year later, Celia died, back in Sudbury, at the age of 76. 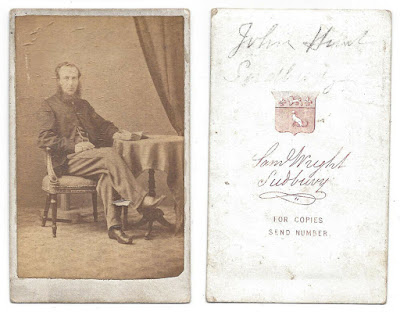 John has a step-daughter Alice Poole ...  Poole? Poole? ... this could explain the presence, in the bundle, of

I guess it was around this time (1891 census) that Bartley was photographed. His little brother [Henry] Murton Poole ought to be in the box somewhere ... 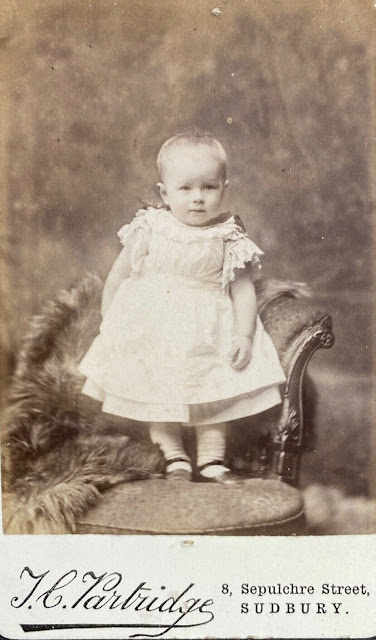 Bartley and his father are at Hill House, Lawford in 1911. Later Bartley is farming at The Lodge, Homersfield. Murton took up farming in Tendring, married, had sons ... Bartley took longer about it. I see him in the 1939 census, 'farmer of Akenham Hall Cottages' with a wife, Florence Emily, a daughter Florence (1915), and sons Arthur ('cowman' 1920) and Eric (1927) ... so I guess he became a cattle farmer ... not in that frock, you don't!

Right. I am getting as far away from Sudbury as I can. I'm going to ... Calcutta. No, not the Indian army, but the next best thing: the East India company. John Fountain was the son of the Rev John Fountain, with William Ward an early missionary to India, and there became a lawyer with 'John Company'. He married (8 May 1831) Miss Sarah Ann Gibson Eliza Jones (b Newington 13 June 1813; d Fort William, Calcutta 16 November 1847), and of them was born a son, John Henry (b Calcutta 1831; d Blenheim New Zealand 10 May 1880 'master of the Wairau native school'), Robert George Fountain (c Calcutta; d Fairview Rd, Mt Eden, New Zealand September 1906, 'New Zealand under-minister of Justice') and a daughter, Hannah Eliza. 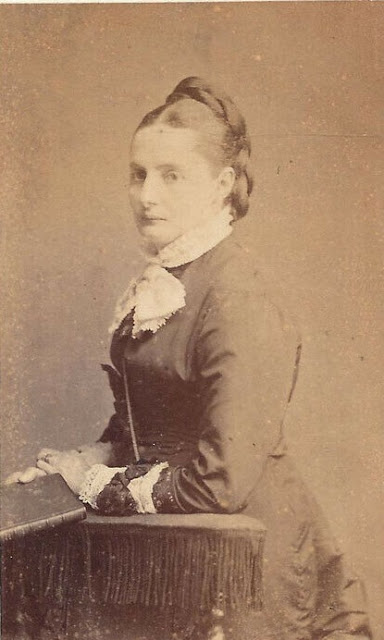 This next photo posed me problems. The vendor had no idea what to bill it as, and I, having midnight-oiled it, am not sure. This lady is either exceedingly grand ... or pretending to be. 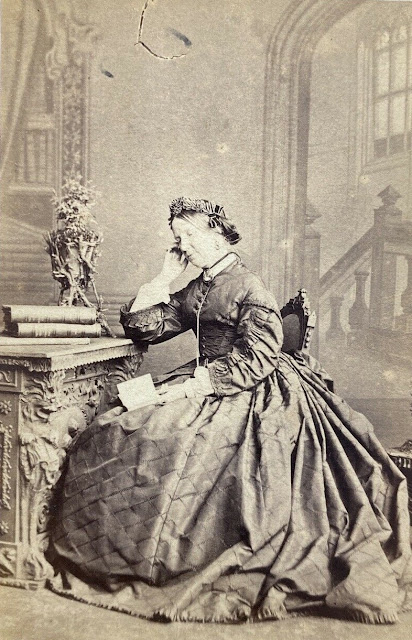 So, Miss *** Graham Stirling married Mr *** Lindsay Edwards .. all very Scots ... but what is Mr ?Pelee doing at the bottom. Or is it Mrs Peters?
I wish I could date the photo. There is a Mr Lindsay E Edwards, civil engineer in India, of Tunbridge Wells, with a wife named Lucy, but he was born in 1884 and she looks a little earlier ..
So, what about the Miss Graham Stirling. Well, there were a lot of those. The family of Graham married into the wealthy family of Stirling, Mr Graham inherited the Stirling estates and changed his name to Graham no hyphen Stirling ... so his sisters, the Misses Graham, became Misses Graham Stirling from the nonce ... The eldest one is mentioned by Thomas Carlyle and Dr John Brown and in the daily newspapers of her time as a high society lady, Miss Jemima (8 November 1816-1890) is presented at court by Lady Bellhaven ... she's by Alexander Graham Stirling out of Margaret Moncrieff ...  but this generation seems a tad early for this lady ..  Then there is the generation of Thomas Graham Stirling (wife Caroline Home) of Strowan (only sons), and his son Thomas James G S -- the latter were Alice Elizabeth, Mary Maud and Florence Kate -- but nowhere can I find a kosher Strowan Graham Stirling who married a Lindsay Edwards (or a Peters) -- I'm sure the family has been dissected in some volume of Scots gentry, but I'm not going there. So I'm none the wiser about this lady, and the person who called her 'Aunt'.

*** STOP PRESS Bryan Kesselman outed her. Catherine Lindsay Wemyss GRAHAM (b Edinburgh 1830) so possibly related somehow to the Graham Stirlings. Married the Reverend George Robertson Edwards when aged 21 and he 44 in 1851 at Southampton (!). They lived and reverended in Shawbury, Shropshire (cook, housemaid, domestic) until George died 1886, when she removed to the Osborne Hotel in Bournemouth's West Cliff. 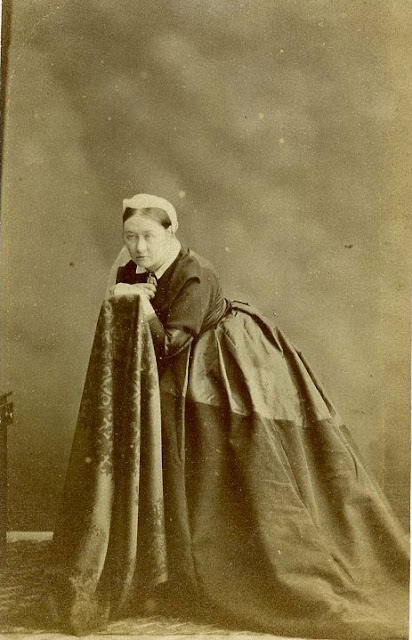 Sabine Matilda THELLUSSON (b Marylebone 9 June 1823; d Queen Anne's Lodge, 22 March 1882) was the elder daughter of Thomas Robarts Thellusson (d 29 March 1869) and Maria née MacNaghten (d 23 January 1881) 'daughter of Sir Francis Workman Macnaghten'. Father was a descendant of the hugely rich Peter Thellusson (1735-1797), banker, of Brodsworth, William Thellusson, Baron Rendlesham etc ... you can read about the Thellusson's struggle against the establishment to keep their family fortunes together, in books and newspapers. They got done out of a great deal, but they saved the estate and the 'property in the Caribbean', and there was still plenty, plenty left by the time Thomas's generation came along.
So we see Thomas and Maria living at 16 Hyde Park Street in 1851, with their daughters Sabine and Letitia ... Sabine married the well-connected Richard Greville of Milford, Surrey ('a relative of Charles C F Greville' 'son of Richard Greville Esq and his wife') of 'own means', Letita became Lady Dighton MacNaghten Probyn ... a cousin, daughter of Maria's sister and 'knight general officer of the royal household, secretary to the Prince of Wales, and general and keeper of the privy purse'.
'The eccentric widow Mrs Richard Greville' gets mention in modern biographies of George Eliot (a neighbour at Godalming), Henry James, but no one tells us much about the defunct Mr Greville. Apparently he was related to a Baron and a Viscount and I see that he died, aged 78, at their home at Milford Cottage, Godalming 15 May 1866. So he was 74 when he married ... Sabine was 39 ... Anyway, the 1871 census sees Sabine, a respectable widow lady of 47, living alone at their town house at 23 Wilton Crescent. Well, not exactly alone, their are seven other occupants: housekeeper upper housemaid, lady's maid, scullerymaid, kitchenmaid, butler, footman ...

I'm sure there are plenty of tales of Sabine's exploits as a hostess a society-lady and an eccentric to be found. Me, I just wonder if I should not go back to the collection where I found this (the scribbled pencilled names are bald and only semi-legible) to see if there are other folk there who belong to this circle...   AND YES! 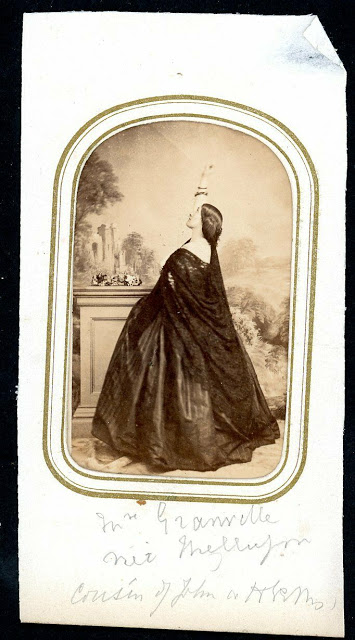 Here she is again!

Yoicks! just looked at Sabine's friends. Grand lot. All from one photo album circa ?1862. Clearly owned (I guess) by an elderly man who served in the army ... the Afghan war of 1838 ... 11.40pm ... I'll just have a go at deciphering ... OK .. I see ... put myself in his wobbly pencil and .. ah! it's not Gazelly its OAKLEY ...
PS Many months later: the puzzle is coming together! The best clue is the wedding-presents lists at society weddings ... all the distant relations send a teaspoon or a pair of socks!
PPS the family is everywhere ....
8) Copy Marriage Settlement as to divers hereditaments in Shropshire, Edward William Smythe Owen to Charlotte Mary Madocks, 7 Feb 1824
9) Copy Deed Declaration of Trust as to policy of Assurance in £4000, John Madocks and Trustees of his 2 sisters' settlement, 1 Sep 1829, also, Copy Release for sum received for the Equitable Assurance Society in respect of the above mentioned Policy of Assurance, Edward Berens Blackburn, Edward William Smythe Owen and the Trustees of his marriage settlement and Mrs Sidney Madocks, to Abraham Wildey Robarts, 6 Jun 1838