.
For my last dig around in the photographic debris of the 19th century I'm going to put a few folk, who've been scattered round ebay, back with their families. Already this little game has reunited two photographed folk with their descendants ... maybe another? 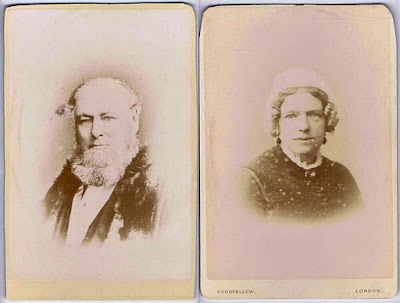 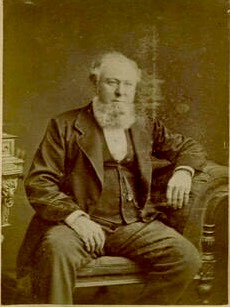 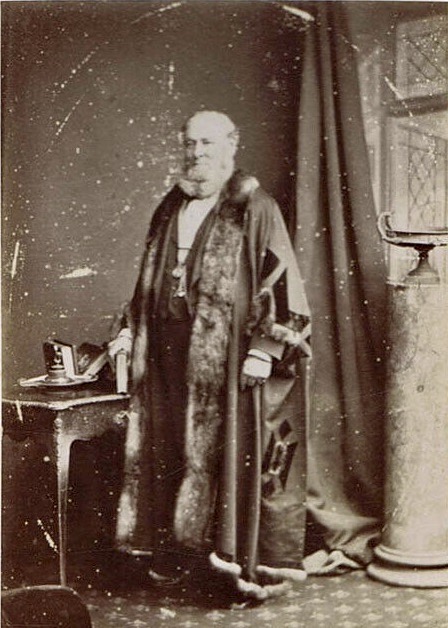 George, as you can see from his fancy dress (civic? guild? mason?) had a colourful life, and a successful one. Professionally, he was in the clothing business. His father, George (b c 1796; d Camden 10 May 1860), was a furrier at various addresses, all in Oxford Street, and young George, who in the 1851 census, described himself as a strawhat maker and Hetty as a milliner, joined and took over his father's business. On his 1842 wedding certificate he describes himself as 'furrier'. The founding father of the firm and family was John George Poland, and furrier of -- since 1804 -- 90 Oxford Street (b Hof, Germany December 1764; d 24 September 1816). His brother Peter [Raymond] Hof also operated in the wholesale skin and fur business.
There must have been money in furs, because I see that G A owned his own freehold house in Portman Square before his marriage. Maybe it was Hetty, whose father was a fringemaker, who was into straw hats. He seems to have been a fur man. Even though he became Grand Master of the Guild of (Wallpaper) Painters and Stainers. Which may have been the excuse for the above robes. He also seems to have been quite deeply involved in civic affairs and (Liberal) politics, and shortly before his death he was, briefly, a member of the Metropolitan Board of Works. When he and Hetty died, the extent of his investments in property could be seen 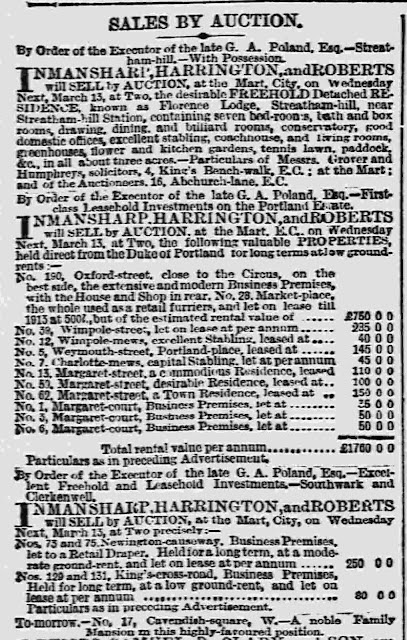 On top of all these activities, he was an impenitent breeder. Both of show pigeons and of children. I have lost count of the numbers of his children, but I spot a Maria (Mrs South), Emily Julia (Mrs Harrington, partner of Charles Poland, architect), Hetty Jane (Mrs Ord), Rosina Jane, Sidney Michael, Henry Gordon, Charles Ernest, Frederick William (1860-1934) pictured below 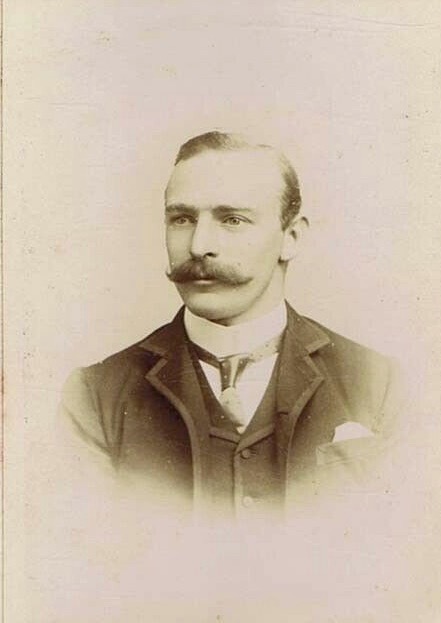 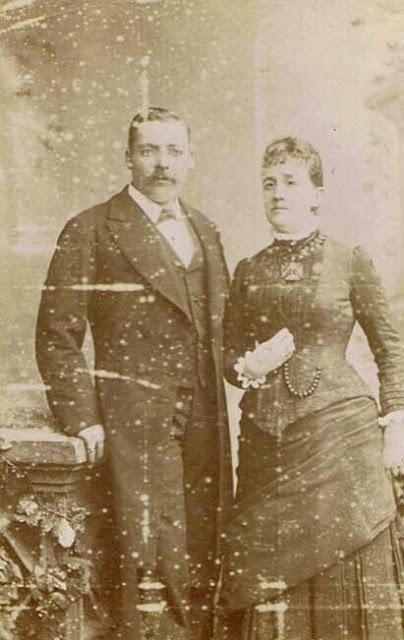 Fred started working life as one of the many assistants in the drapery of Octave Lamare, court dressmaker, in Conduit Street, Mayfair (I lived some years just a bobbin's throw from that address!) and by 1911 is listed as an agent in leather goods. He was married to Mary Elizabeth Hosking. 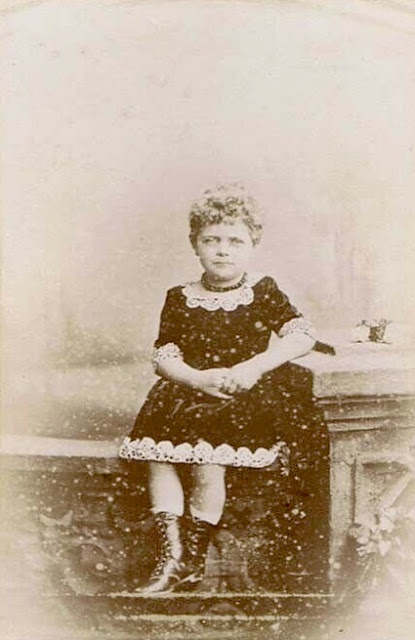 There are a hundred peregrinations to be made into the Poland family -- Peter's son became High Sheriff of London and was dubbed --  but I shall just stick to the pictures ... and send you for further information to http://nrl.northumbria.ac.uk/31598/1/hope.david_phd.pdf for the story of the Poland brother's large part in the 19th century fur trade. 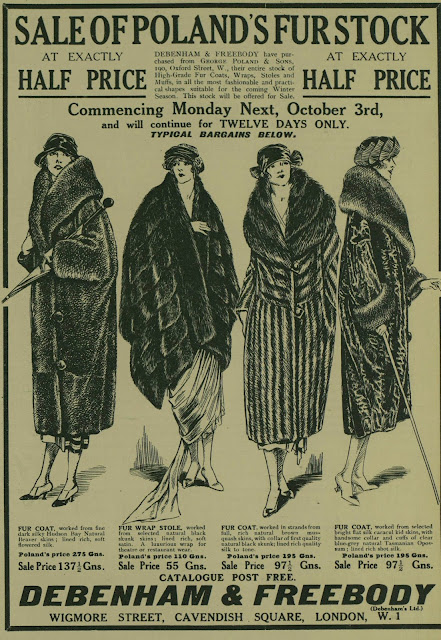 Oh, number 90 Oxford Street (between Dean Street and Wadour Street) survived well over a century as a furrier's, until it became a Dorothy Perkins shop. Apparently is now 'The Sunglasses Hut'. How the glorious are fallen: from the heights of furry fashion to the pits of pseudo-fashion!

Husband and wife only this time .. 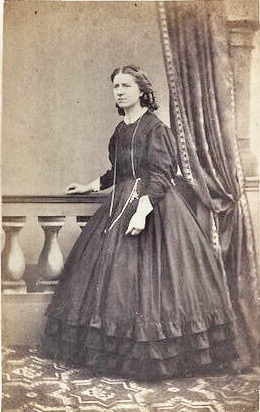 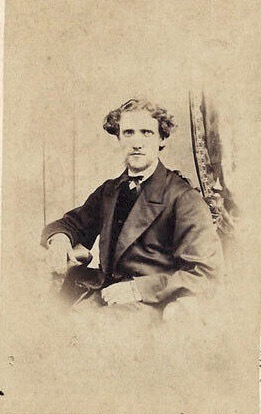 Samuel Brame was born in Yorkshire, the son of John Brame, town missionary, and his wife Ann, and worked from his earliest teens as a japanner. He ventured to London (see him in Hatton Garden in 1861, listed as 'commercial'), but settled in Birmingham, where he married Marie (b Birmingham 1841; d Birmingham 1879) the daughter of Charles Ball, gold chain manufacturer, and set up as an emigration agent for New Zealand (1864-8). That proving unsuccessful, he joined his father-in-law's firm, which became Ball and Brame, 'employing 14 men' and occupied himself with the local church schools. A son, Charles Samuel died aged two, daughter Zillah Marie aged nineteen, a second son, Ernest William survived to become a canvasser for Lever Brothers, and two further daughters(Nellie B and Miriam Evangeline) arrived before Marie died in 1879. 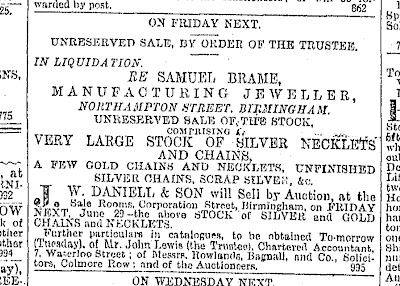 Samuel remarried, Alice Matilda Boston, of Acock's Green, in 1882 (21 January), and switched to a new career, as a political agent. I don't know what he actually did ... but he did it for the rest of his visible life, up to his death aged 71.

The next family, to my surprise, I had already encountered in my work on D'Oyly Carte singers. This is Margaret ENGLISH née ABRAHAM (b Carlisle 20 December 1816, d 1872), wife (1845) of Liverpool shipbuilder's clerk (later shipowner and broker, Charles John English (b 1820; d Upper Parliament Street, Liverpool 10 May 1898). 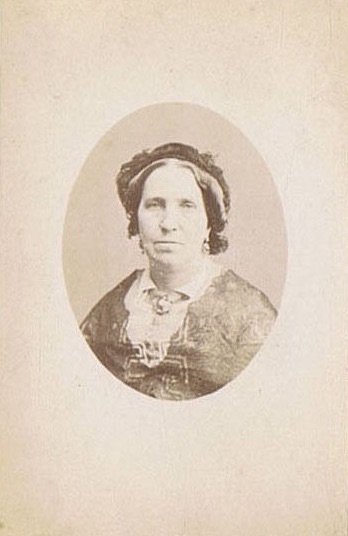 Francis George ENGLISH (b Liverpool 1859; d unknown). A shipping clerk in Liverpool at the age of 22 ... is this the answer? 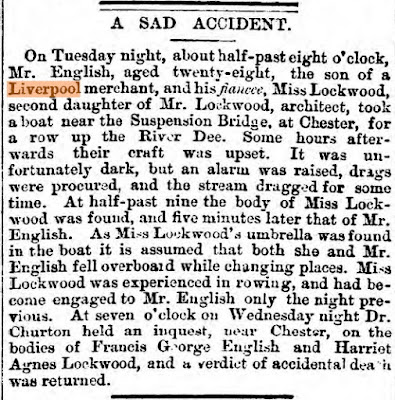 Well, it's a whole week, now, that I've been digging in this photo box. It's been fun, it's been interesting, but it's time to get back to the Victorian theatre.

I've still got a folder of folk, uninvestigated, in my Dropbox, so maybe I'll return to them one day ... and, of course, more will surface daily ...

Posted by GEROLSTEIN at 9:56 PM