Guess Who is who! The Answers.

Well, here are the answers to yesterday's quiz ...

The first picture I picked was .... 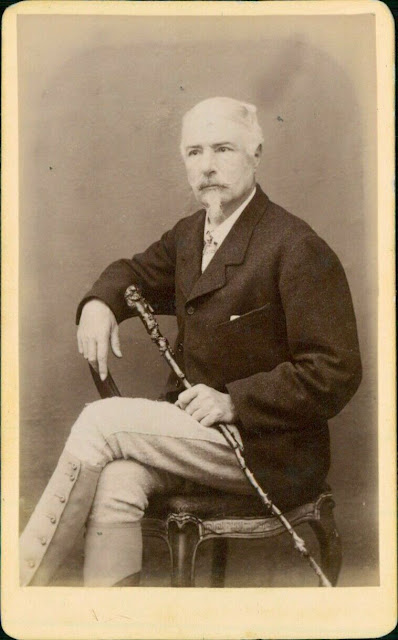 Arthur Hamilton SCROPE (b in secret 31 October 1837; d 88 St James's Street 19 October 1891)  He's the half nobility. The 'natural son' of the very well-known George Poulett Scrope (né Thomson) of Castle Combe, Wilts, by a London actress or 'actress' apparently named Mrs Grey. Scrope and his wife later (1856) adopted the child. This magnanimity on the part of Emma Scrope (who had brought her husband wealth and property as her dowry) was probably at least partly due to the fact that, since a riding accident shortly after her marriage, she was an invalid and would remain so up to der death in 1866. I sha'n't go into the exploits of George Scrope M P, which can be read in many books, and return to Arthur. He was sent to Eton and Oxford and in 1858 his father bought him a comission as cornet and then a lieutenant (1859) in the 7th Light Dragoons, then (1860) the 12th Dragoons. In 1862 he purchased a post as cornet with the Horse Guards. He lasted but a year as a Guardsman before he resigned, leaving his place to the Marquis of Blandford.
Now, much to my surprise, in the mid-70s, he appears at a couple of functions with a Madame Scrope. But she seems to be ephemeral. However, in 1876, George Johnson otherwise Scrope died, and Arthur inherited a chunk of money. Thereafter he seems to have lived quietly at 88 St James's Street (and Arthur's Club) ... At his death, which seemingly went ignored by the press, he left over 76,000L 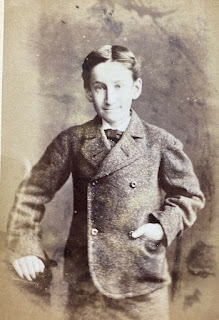 He left only 1400L in his will, but don't let that fool you. He'd been ailing some time. Who writes a will at 37? He died at Bournemouth, but lived at Plaisance, Highfield Hill, Upper Norwood. And he had access to pots of money. Or a share of it. He was the youngest of eight children. His father was William Schindler Edgar, his mother Eleanor Ingle of Belper. His grandfather was William Edgar who had a shop on Piccadilly Circus .. 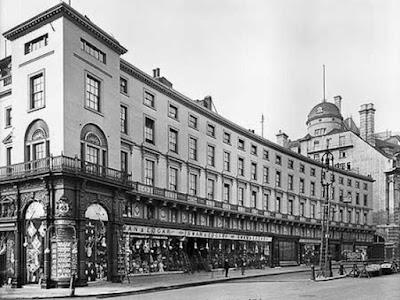 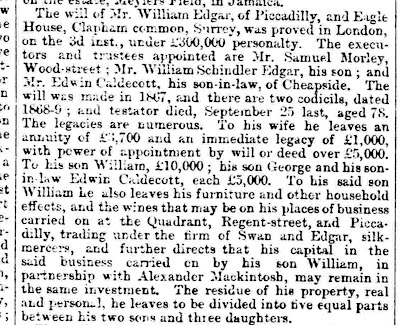 'Silk mercer' can cover a multitude of meanings.
Edgar spent his life 'living on his own means' and died, I wonder why, too soon.

Mrs Marriott H Hall was Sarah Bingham Taylor née FIRTH (b Ecclesall Bierlow 21 January 1834; d The Gables, Ranmoor, Sheffield 21 November 1897), daughter of Mark Firth (d 1880), a steel refiner and manufacturer and his wife Sarah (d 1855). Doesn't sound anything special but ... Mark Firth has made his way into the DNB. He was not just any foundryman: 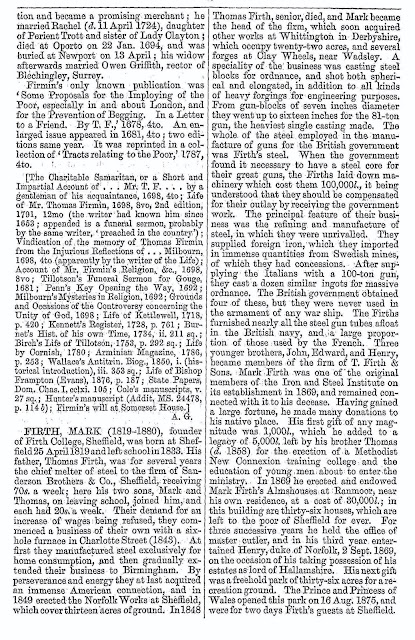 Sarah married Marriott Hall, surgeon, in 1866, had three children (two survived), and lost her husband when he was just 38.  She lived, latterly, with her husband's unmarried sister (and three or four servants) and left, at her death, 32,000L. I can pick 'em, can't I!

One last curiosity about Sarah. Look at the rather wobbly writing on her photo (the vendor, understandably, transcribed it as Mrs Marriott Le Fall) 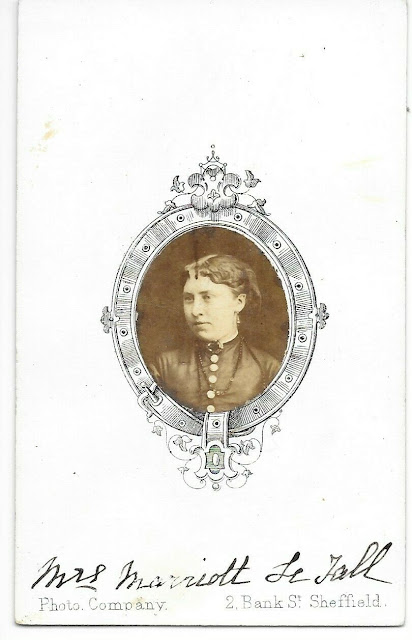 And then look at the writing on these two photos, from the same vendor .. 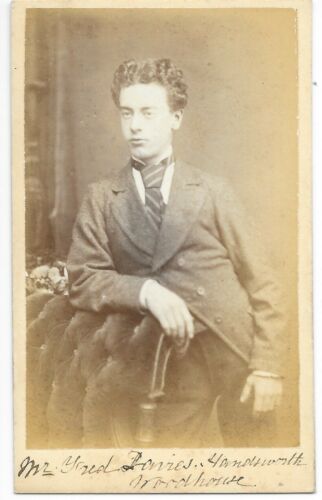 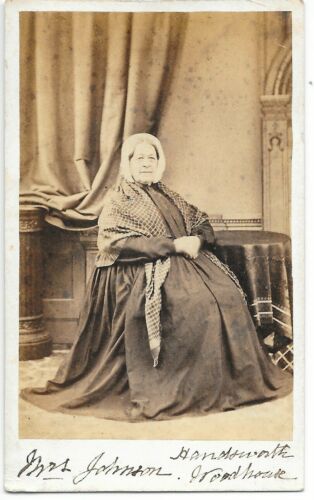 The same? And also from Sheffield ... what's the connection? I devoutly wish dealers would keep sets together and save me (and museums) the trouble of re-assembling them! 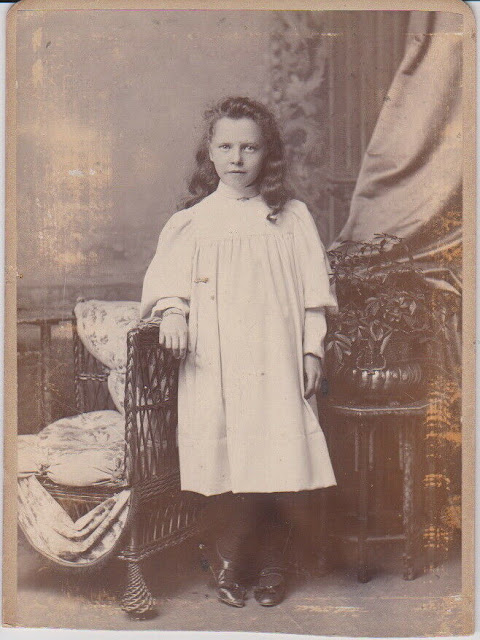 Oh-oh. Newspaper ad: William Thomas Pugh, younger son of the late Richard Thomas Pugh married Ann Cormick Phillips daughter of George Phillips of Belsize Park 3 July 1886 ... so who is Richard Thomas, then? There are several .. a churchwarden, an official in British Guiana .. no. He's a coal merchant in Salisbury Street. But a coal merchant with 4 daughters, 2 sons and three servants, and a wife Susan whose maiden name was Langrish. Yup, that's grandad. In 1881, William is the coal merchant, but a decade later he's director of an insurance company. Yeah, sure. What insurance company? The Puddlesby co-op? No? A little affair called the Prudential!! Well, little Alma was an only child, so ... when she died, unmarried, in 1952 she left a cool 83,000. 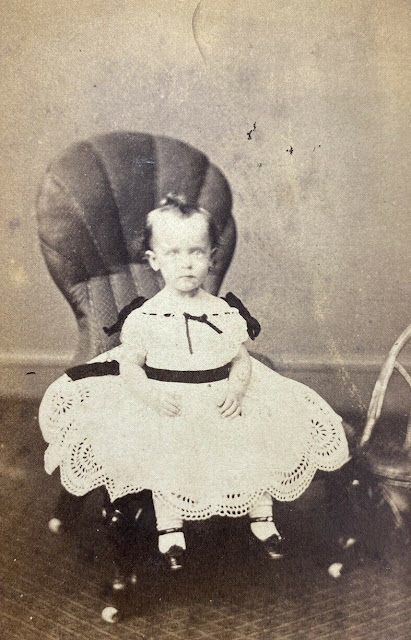 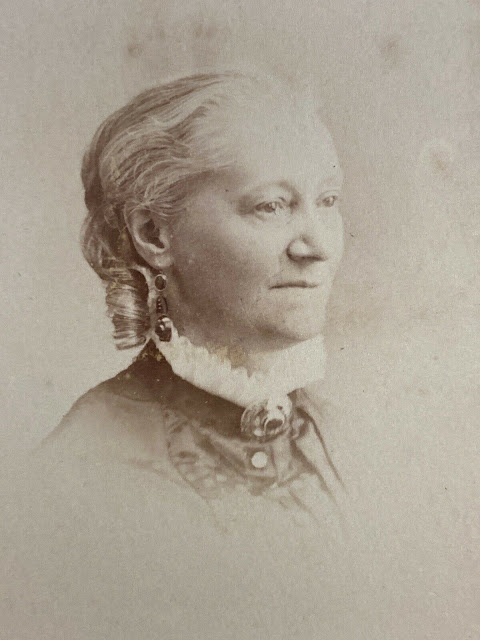 The address, already, tells me we're not into the agricultural labouring class. So, who was she. She was the youngest of the three daughters of William Compton and his wife Mary Ann née Tibbatts

I don't know what William did, if anything. He just says he's as 'gentleman'. Anyway, he clocked out fairly early in the piece, because Mary Ann, her sister and the three girls can be seen in the Bristol Road, Edgbaston in 1851 and mother is a widow. Two years later, Selina married. Her husband was Jeremiah [later, Cresswell] Gill, MA (Magdalene), successively curate of St Mark's, chaplain of St chael's, chaplain to the Birmingham Cemetery, St Michael's Warstone ... In 1861, they are in Spring Grove terrace, Birmingham with the elder Gills: father Thomas is censussed as 'man of letters', mother Hannah is a 'landed proprietor' and Selina has the first two of her sons. I'm not sure how successful a clergyman he was. In 1871, the family (three sons) are living with brother Thomas Hornblower Gill (author, poetry and history) in Lewisham and Jeremiah records he is 'without care of souls'. But they were all right ... By 1901 bachelor Thomas (82) is still writing, and by now he is living with them, in their home at 3 The Avenue, Lee, Kent. Jeremiah is 79 and still professing 'clergyman'. The boys have gone. Ah. The boys. Well, in traditional fashion: one went to God, one to academia, and one to money.
The Reverend Canon Ernest Compton Gill rector of Down Hatherley died 2 September 1911 aged 58, leaving a widow, three children and 34,000L.
Wilfred Austin Gill MA (Magdalene) is a whole story to himself. Blackheath, scholarship to Magdalene, First Class Classical Tripos .. a career academic his whole life, he rose to high University position, lectured on such subjects as 'Our intellectual debt to Greece' and 'Modern English Ethics: ancient and modern aspects of Hellenism', and penned a biography of his friend Edward Cracroft Lefroy. Lefroy's writings left no doubt about the aspect of Hellenism he was into:

Wilfred 'of Magdalene College' died at Lugano 7 December 1899, leaving, evidently, neither wife nor issue but 14,000L.
Arthur Bernard Gill became an engineer. I see him patenting a device for lighting electric trains. He must have done something else of note, for at his death (Cobham 17 June 1942 'of the Royal Automobile Club') he left almost half a million pounds, and the property known as Compton Hall. Arthur's most mediatic activity was his divorce (1920) which was splashed all over the papers, to the detriment of his sleep-around wife née Miss Mary Rhodes Levy, who promptly died ...
So, Selina was the mother to these Gracchi ...
She died days after Jeremiah, and she officially left 9000 pounds. But she had the church, academia and Hellenic culture and the wealth of Compton Hall ... 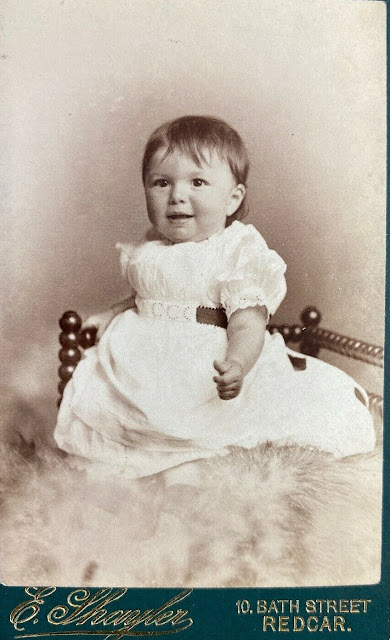 A bonny baby! Father was a weighman in the coal mines (Miners' Hall), and there were two elder children, Ralph and Dora. In the same lot of photos, I found these. Mr and Mrs Errington. Parents? On holiday in Blackpool ...? 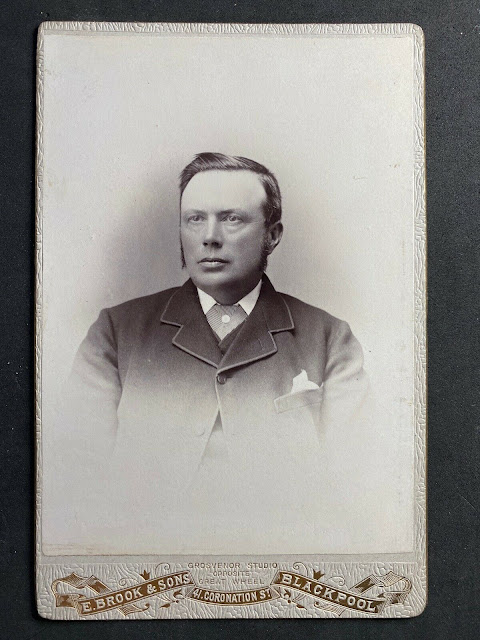 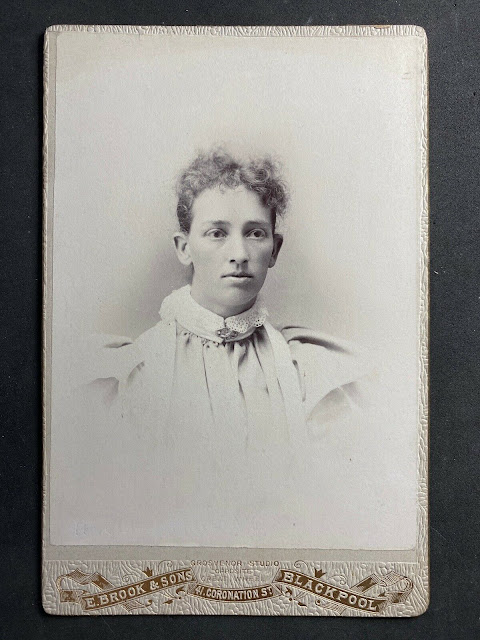 By the 1911 census, Ralph was a ship's plater, Dora a schoolmistress and Lucy a milliner. Father was a widower, and acting as a miners' agent, whatever that may have been. A couple of months later, Lucy married Heworth shopkeeper's son, Thomas Gladman Stafford (b 23 September 1888), and in 1939 I see them in Chester-le-Street: Thomas is a land agent's assistant, Lucy is running a drapery store. In 1958, I spot them floating into England ... Thomas is now retired, but Lucy is still a draper! And home is now 6 Cedar House, Marlee's Rd, Kensington! So where is Lucy draping?
Well, Thomas died in 1961. Lucy in 1973. She left 9000L. It must have been the draping that did it.

I picked the next photo before I clicked. It was labelled 'Rosalind Elliot'. 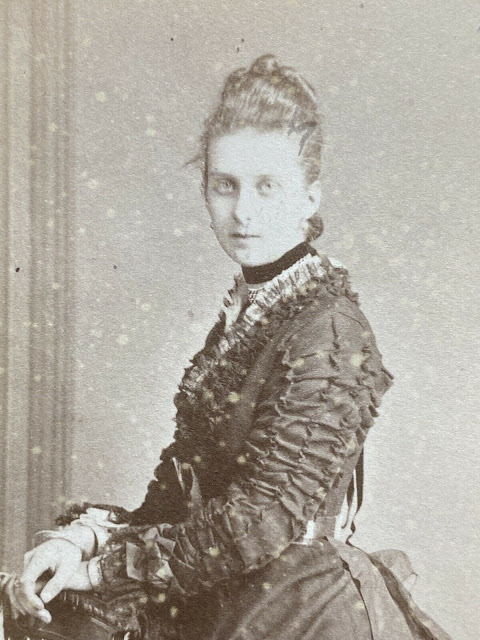 It is, of course, Rosalind Frances ELLICOTT (b Cambridge 14 November 1857; d Seasalter 5 April 1924) who is labelled as 'one of the leading female composers of her generation'. Humm. She didn't have much competition except in the world of Claribel-ish ballads, which was not her scene. Anyway, whether she was propelled to the fore through social means (father was a bishop) or through merit has been sufficently discussed. Nowadays she is propelled (when she is) by the modern sexist fashion for everything female. Lucky Rosalind. Oh, she didnt make a mint from her music: she left 15,000L.

Of our other 'composer' I can tell nothing. It just says 'W Russell, composer'. Fail. 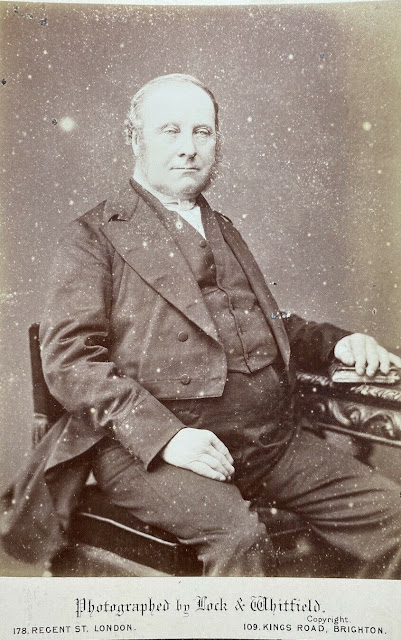 No such troubles with the next one. 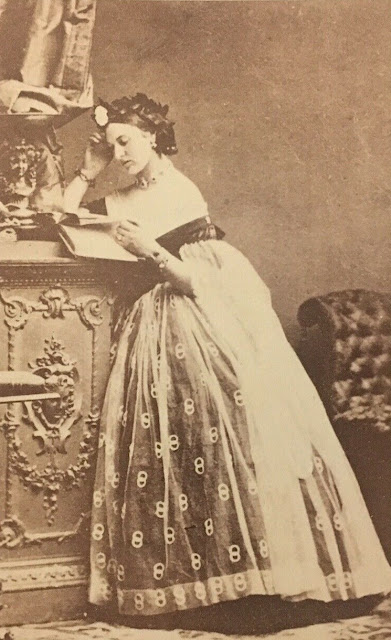 Anne Sutherland-Leveson-Gower, Duchess of Sutherland (b 21 April 1829; d 25 November 1888). Countess of Cromartie, Marchioness of Stafford. At least, I presume it is. She held the title from 1861 to 1888, which I think would cover the possible date of this photo ... 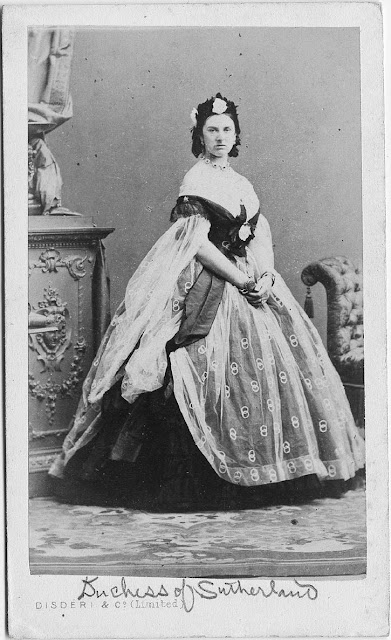 Well, there are our ten ... there are a few leftovers whom I didn't get round to .. eg Louisa KNAPP. The only Louisa Knapp by George out of Louisa was born 8 September 1811. Could she be that old? YES! Goddamit. She is. Louisa Jane KNAPP (b Shoreditch 12 July 1811; d Hackney 1866), by George Knapp out of Louisa Morton née Hyde. Married (20 October 1832) Arthur Dunn, chemist and druggist and fancy soap manufacturer. TEN children ... I notice one was born in Mexico and died in New Zealand! 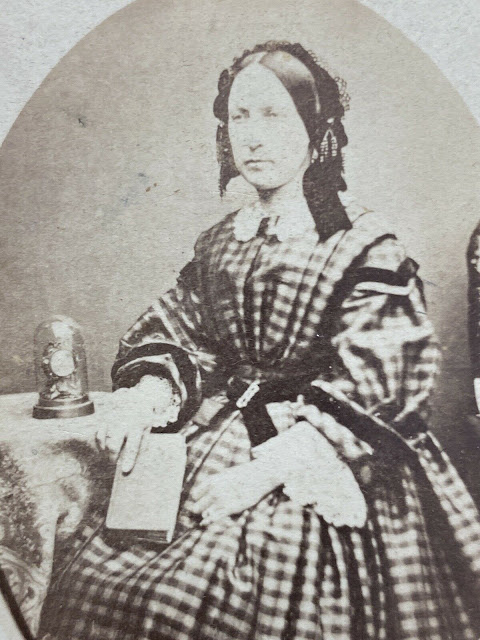 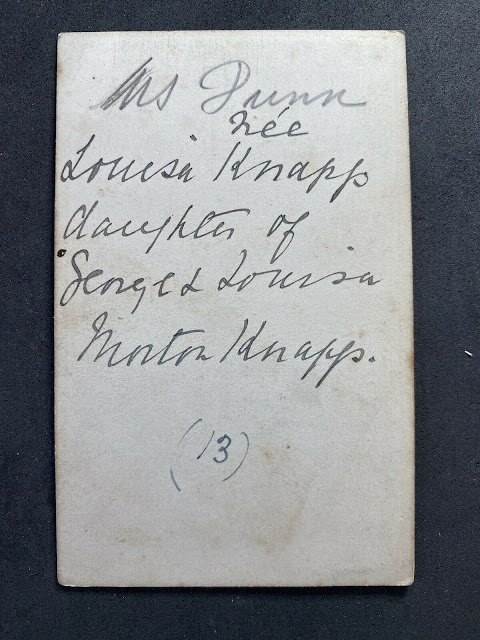 After the tenth child, Louisa gave up the ghost. Arthur survived her, rewed, and lived twenty more years. His soaps can't have sold too well. He left 97 pounds to his second wife.

Time to go back to the theatre. I've been posed the odd problem ...
Posted by GEROLSTEIN at 4:57 PM