Cartesians: The smaller they are, the harder they fall (into my net) ....

.
Well, I started out, yestermorn, to clean up, as well as I could, that 1894 Utopia Company as itemised on George Low's pay sheet. I didn't do badly, but, of course, I got sidetracked, so my offering, 24 hours later, is a bit of a mishmash of Cartesians from all over ...

Samuel [Inman] SCHOFIELD (b Oldham 23 January 1862; d USA) was a member of the Carte companies for five years, 1890-5, as a chorister and small part-player. He was born in Oldham, son of  cotton-mill manager, Henry Schofield, and his wife Sarah Ann, and initially worked as a secretary in the mill, before trying his hand at the stage. He dubbed himself 'operatic vocalist' when 2 July 1894 he married Susan Mellis Carlin (b 26 October 1866; d Fulham 1948) from Waterloo, Lancs. A son, Henry William Mellis Carlin was born at 91 Drayton Gardens 6 March 1898, and soon after both marriage and stage career ended. By the 1901 census, Sam is back being a 'clerk' in Willesden; Susan at the baby are in Broadstairs. In 1907, Sam scarpered to America, declaring himself single and childless. I see him living alone in West 136th street 'legal bookkeeper' in 1930 ...  As a teenager, baby Henry joined the Indian Army and sailed out of my ken ... 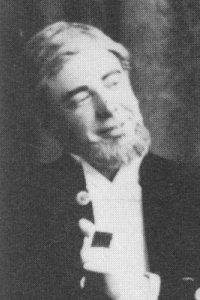 Another who made of his time with the Carte his whole career as a professional singer was [William] Crosby HOPPS (b Easingwold 14 August 1869; d Los Angeles 25 December 1941). The son of John George Hopps and his wife Elizabeth née Jepson, he was engaged as an assistant schoolmaster at Tockwith, Yorkshire, and from the age of 20 began to be featured in local concerts as a tenor singer. York Penny Concerts, York Corn Exchange, Easingworld People's Concerts etc. In 1892, he tried the experience of professionalism, and spent some three years with the Carte tours .. 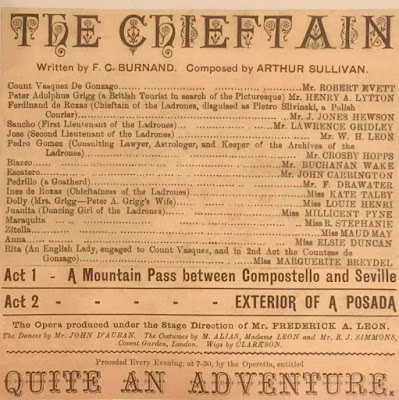 John [Brereton] MACAULEY (?USA; d ?3 November 1915) is a wee bit of a puzzle. The date of death I've pinched from the Archive. The only documentation I had was his 1911 census entry. He says  -- at least I assume it's he -- he's 42, a music-hall artist (character vocalist), born USA and, under married he's put 'grass widow' which a humourless official has altered to 'married'. So I followed up ... and found him a middle name ... 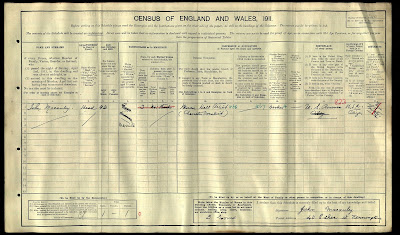 Professionally, Macauley seems to have started out in Ivanhoe and La Basoche at the English Opera House, before replacing Courtice Pounds at the Savoy as John Manners in Haddon Hall, and then going on tour in Haddon Hall, The Vicar of Bray, Utopia (Limited) and Mirette. In 1896 I spot him playing in a small compay playing wild-west drama (One of the Bravest, On the Frontier), in 1897 at the Clapham Washington Theatre of Varieties 'late principal tenor Royal English Opera House and Savoy Theatre' and in 1898 at the Johannesburg Empire ('operatic singer'). Over the next decade he pops up at the Crystal Palace in their Café Chantant and as Santa Claus in their Christmas show, at the London Pavilion, at the Alexandra Palace ballad concerts, and later at various Hippodrome and Empires ('character actor and vocalist') ... Surely, its the same man .. 42 years old? Well ... we were all young once. Oh, I see that Violet Eugenie (b 6 July 1885; d Salisbury 1941) married again in 1921: a Czech 'artiste' Frantisek Gebhart (b 13 January 1876)  and they were still professing 'music-hall artiste' in 1939 .. 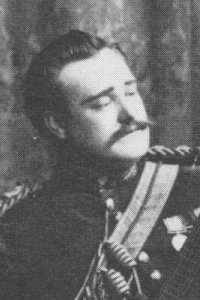 Back to the Utopia list. Florence HUNTER. Unfortunately, there were two simultaneous theatrical 'Florence Hunter's, but our one apparently didn't go on after her Carte engagement of nearly three years. Except to motherhood et al Florence was born into a complicated family as Florence Tulk HART (b Bow 2 or 10 March 1865; d Stockley Cross, Stanton-on-Arrow, Kingston 15 October 1950).  Sometimes father Arthur Marmaduke Hart called himself Hart, sometimes Tulk, sometimes more expansively Tulk-Hart. Marmaduke was a doctor from Walham Green and his wife seems to have been Helen Gwynne née Symes. I'm not going into the Harts or Tulk-Harts, I shall just say that Florence was the eldest of four daughters ...  So. Our Florence joins Carte, and there she finds her (immediate) future. She married the tenor. And yes, it was going to turn out a typical flop. [J] Van Rensselaer Wheeler (b Pennsylvania 1869; d 304 New York W 74th Street, 15 February 1919) was a young American vocalist who had arrived in London in 1893 (3 June) and swiftly got a job as leading tenor with Carte's touring company. Amost as quickly, he got married to Florence. A son, Edmund van Rensselaer Morrison Wheeler was born in High Holborn 26 February 1895, a daughter Helen Constance the following year, by which time the Wheelers had returned, it seems, to America where Wheeler was to have a fine career as a leading man in comic opera and musical comedy between 1896 and 1917. I suspect the marriage lasted much less time. In the 1900 USA census, Wheeler is living with his mother, Charlotte Dolliver (father: van Rensselaer Morrison) in New York, and Florence can be seen crossing the Atlantic with her two babies. Helen died in 1909 aged 13. In 1911, Florence and Edmund (1895-1976) are also back living with her mother ... temporary or permanent? The latter, I feel ...  Wheeler died 'of acute indigestion' aged 50, and his obituary remarked only 'he is survived by his mother'. Florence lived another 40 years ...

Let's have one that survived his Carte years. I was going to wait with Arthur WATTS until I had some dates with which to decorate him, but there are so many Arthur Wattses ... one much more famous than he ... and tracking him down proved excessively boring. Even though the famous AW called himself 'Arthur Williams' for his stage triumphs (Lurcher in Dorothy) and marital misdemeanours. So all I can offer, for our Arthur, is a summary of his quarter of a century as a fine musical-theatre comedian. I first spot him in 1884 'character comedian', then in pantomine as King Rat at the Price of Wales, Liverpool. He played Bogumil in The Beggar Student at the Comedy Theatre (1886), toured in leading comic roles in Erminie, Little Jack Sheppard and Les Manteau Noirs. He was cast as Zeberdy Slim in a trashy piece, Madcap Midge, at the Opera Comique, but made up for that by supporting Willie Edouin in Our Flat. He went back on the provincial circuits for In Summer Days (Mons Jacques) and Madame Cartouche starring Guilia Warwick in 1891, teamed with Watty Brunton in the Crystal Palace Babes in the Wood, and took up the role of Curro in the rewritten The Magic Ring for its brief life. He was playing in variety for John Tiller before he took on his job with the D'Oyly Carte to play Phantis in Utopia (Ltd).
He played pantomime in Dublin and Bradford, split by an engagement to play in Buttercup and Daisy for William Greet, before, in 1896, he created the role of his career, as the French gendarme, Paul Lecuire in the hit musical, The French Maid. He would return to his role over and over again in the next five years. In between times her played in All Abroad, The New Barmaid, Washington Quincey Queerpoint Porgan in a written-in comic role in The Belle of Cairo', Lt Lambton in The Houp La Girl (1904) and I last see him playing in S'Nero with M R Morand at the Coliseum (1906). And never a hint as to his life, his wife, his abode ...  shucks!

When I was doing George Cockburn, child actor, I spotted him on tour in Scotland in the 1881 census: accompanied by a more notable child, the Joseph Porter KCB of the juvenile troupe. George had fibbed about his age to make himself more prodigy-ous, so I wondered if Edward had too. He had. And the Archive alerted me to the fact that there may be two little Master Pickerings. And there were.
[James] Edward PICKERING (b St Martin in the Fields 6 April 1868; d 118 Els Rd, Clapham Common 7 August 1920) and [Edward] Albert PICKERING (b 6 April or June 1870; d ?Eltham 26 February 1943) were amongst the children of James Mark Pickering, a wine merchant from Bethnal Green, and his wife Sarah née Halford. The boys stayed in the theatre after their childish experience, Edward is censussed as a 'box office manager', Albert as a 'theatrical manager', or in 1939 'cinema manager'. 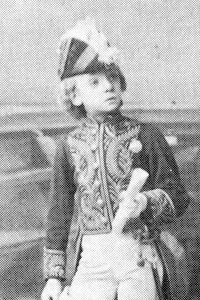 Edward married Rosina Ellen Wilkins, and sired a Phyllis Rosina and a William Henry, Albert married ... yes, well there are several Edward Albert marriages, and at least two of them appear to be our man ...

And, to finish, one more ephemeral Cartesian, who started her teenage career as a teeange chorus girl in Carte's Continental tour and went on to make the occasional splash. Daisy BALDRY [BURTON, Daisy] (b Norwich 4 January 1868; d ?Norwich 1937) was the daughter of Frederick Charles Burton, sometime a lay clerk, and Sarah née Baldry, a sometime music teacher. After her early experience with Carte, she was engaged for the Greenwich pantomime, and caught at least one eye 'tall and fair to see, with a quiet style and refined enunciation not too often foundon the pantomime boards, look classically beautiful and sings her ballad 'For You' with great delicacy and feeling'. Pantomime would become an annual event for Daisy... 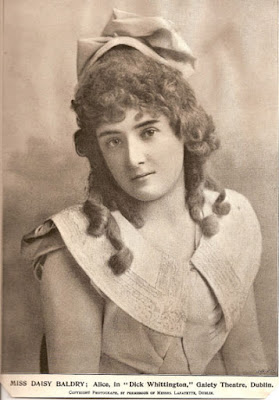 She followed up with a leg-role in The Brigands, Bacchus/Proserpine for Augustus Harris to the Venus of Kitty Loftus then Belle Bilton, Lieutenant Wright in Beauty and the Beast, and Orphues and Peurydice. Also a member of the Harris troupes was one Thomas Dalton Walker, a clown known as 'Whimsical Walker': Daisy married him .. 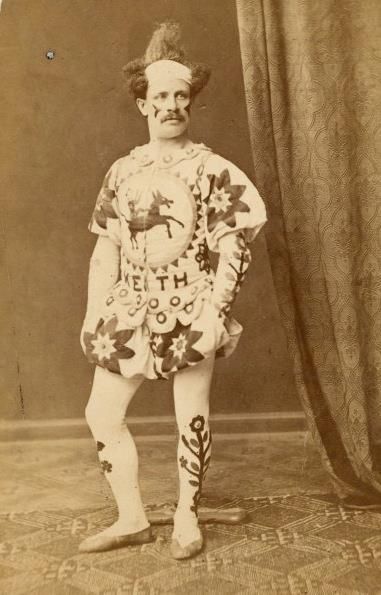 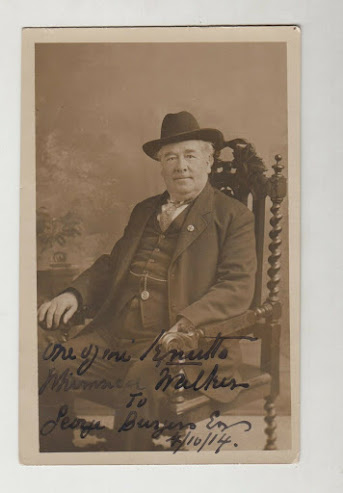 Between pantomimes, she played Vesta in Willie Edouin's Binks the Downy Photographer, Flo Honeydew in The Lady Slavey (1894-6), Countess de la Blague in Morocco Bound (1895), Nellie Pinder in Albert Chevalier's The Land of Nod (1897), alongside Decima Moore and Frederick Ranalow in The Runaway Girl (1898), and Cora Angelique in The Belle of New York (1900), before taking a short turn in drama (The Law and the Man) and Fred Karno's troupe (Her Majesty's Guests). Then she returned to The Belle of New York for a long stint. The reason was to become obvious: Blinky Bill. The gentleman who whistled as 'Mack Olive'. Mr Whimsical Walker sued for divorce, naming names, Daisy counter-attacked, feathers flew, penny-a-liners rubbed their hands ... and I guess the divorce happened, for, in 1916, Daisy officially became the wife of James Smith Fleetwood of Ramsgate with whom she had been living since, and who, I presume, was 'Mack Olive' as they'd been doing a music-hall whistling act together (The Candy Store) since the divorce ... I don't know when he died, but Daisy seems ultimately to have returned to Norwich ... 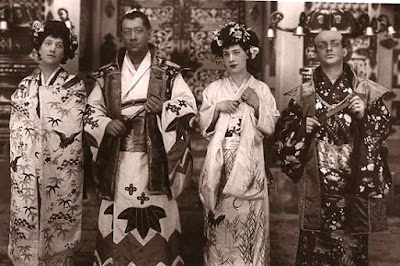 Drawater (right) with Jessie Rose, Strafford Moss and Clara Dow, madrigalling in The Mikado ...
Posted by GEROLSTEIN at 10:26 PM