A Cartesian couple: I love ya honey, but the tour is over. You keep the baby.

I was disappointed when I failed, a few articles back, to sort out Minnie Keene. I like the name 'Minnie' ... we have a Minnie in our family 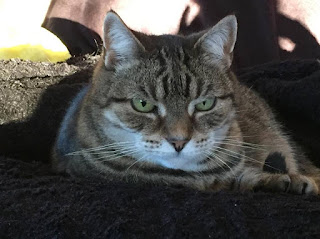 Well, I put Miss Keene unwillingly aside, and moved on. But she was there all the time, being coy, and last night I busted her. In the marriage registers. And whaaaat! Marrying another Cartesian: Mr John Carrington. I hadn't yet gone into him, for 'Carrington' had the airs of a pseudonym. But it wasn't ... and neither was Keen[e] ...

John CARRINGTON (b Cottingworth, Yorks 1867; d Rampoa, NY 13 August 1932). Son of clergyman-schoolmaster Thomas Carrington (b Longford, Derbyshire 1842; d Chipping Camden 24 July 1911) and his wife Ellen, John was brought up in the various places to which his father's employment led him. Apparently from Keston, Kent, to Cottingworth, to Docking, Norfolk, to Lambeth, London. Aged 13, in Lambeth, he is a church chorister. Aged 23, he is at King's College, Cambridge as a 'singing man'. Age 24, he is a different kind of chorister ... with the D'Oyly Carte. Apparently he joined up in March 1892, so he must have been a quick worker: he married chorus lassie Minnie in July. And they had a daughter, Dorothy Nelle (b Lambeth 12 November 1893; d 21 Byron Avenue, Coulsdon 24 January 1970) the following year. John continued singing with the company until mid-1895. And then he dropped wife and baby and, in 1896, scarpered to America, alone. He turns up at the Castle Square opera in 1898 ('the well-known bass of the D'Oyly Carte company') playing Private Willis and Samuel, and singing 'The Brave Rough Riders' at a Theodore Roosevelt rally  .. he got a job as a church singer at Trinity Chapel, Manhattan, sang at St Anne's in the Heights, Brooklyn, and seems to have settled back into a life as a church singer ... . and, on the way he acquired a (bigamous?) wife named Anne née Egan, and an (illegitimate?) daughter named Barbara (b California 17 November 1906). I see him church singing in St Mark's Lutheran, San Francisco ('until recently Trinity Chapel'), in 1905 and he remained 'the popular baritone' in the area ('Professor John Carrington') until 1911 when he returned to New York. I see him still singing in 1919, but in 1930 he is listed as 'schoolmaster'.
In 1900 Witmark published some sacred songs he had written with Nat D Mann ('The Great Beyond', 'Promises of Light'). 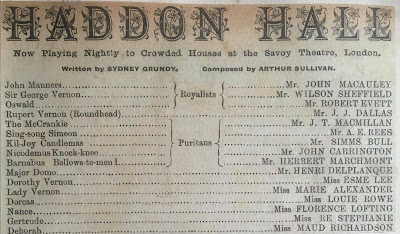 Meanwhile, back in Britain. Minnie KEEN (b Hoxton ?19 September 1864; d ?Croydon 1951) was the third daughter of one John Hopkins Keen (b Mear, Somerset, corn dealer; d Chelsea 1895) and his wife Henrietta née Jacobs. Mr Keen gave up corn, and became 'traveller for a photographic store', and 16 year-old Minnie was employed as a 'photographic packer'. However, at some stage she entered the theatre, and in 1889 she can be seen touring for Lingard and van Biene as Minna in Falka. 1891 I spot her in digs in Norwich with producer Charles Wibrow and family and two colleagues, 'Marguerite Lillian' and Lizzie Williams. Well, at that stage Wibrow was touring Paul Jones, and had been for some time. I imagine the girls were in the chorus. I also imagine (lot of imagination, carefully applied, need here) that she joined Carte around the same time as Carrington. We've had the story of the marriage and the child, and in the 1901 census I see little Dorothy is being looked after by the Rev Carringtons, at his new fief of Chipping Camden. Minnie is not in evidence. But I find her again in 1911. She's living at 77 Palace Road, Lambeth, with her widowed mother and aunt, sister Esther ('shopkeeper facy goods'), brother Ernest, and daughter Dorothy ('student, civil service'), and listed as 45 years old and a widow. Which, of course, she wasn't. A further member of the household was boarder John Alexander Tulloch (b Ireland 22 October 1862; d Palace Road, Tulse Hill 8 March 1941). Mr Tulloch and Mrs Carrington were still sharing a home 30 years on, so ...   Dorothy married, in 1916, Captain Arthur Lindsay Horsburgh (16th London Regiment) and declared that her father was 'deceased' and a 'gentleman'. He was, of course, neither. Put not thy faith in public documents.

The marriage certicate above was interesting. Married on tour, eh? No mum and dad or siblings as witnesses. Those witnesses look like workmates to me. I'd definitely seems M Forbes Wilson before. But none of the names appeared in the Archive, So I searched a bit. 'Maggie Forbes WILSON' [WILSON, Margaret, b 1861] was definitely a sometime Cartesian. I see her in 1900, collecting raffle money in the company. And in 1891, she had played in In Summer Days, with a bundle of other Carte players. Florence [Frances Mathilda] D'ALQUEN (1870-1951) was a pianist and vocalist, daughter of Frank d'Alquen, singer, and very likely a company member as well. William Webster Payne (?1862-1906) I don't know about. But he can't have been very bright. He couldn't even spell his own signature.

So, there is the tale of yet another couple, whose marriage lasted the length of a Cartesian contract ... they kept my at my task until 1am ... but I got them in the end ....