Cartesians: the rest of those girls

.
Well, what do you know! I was wrong to go to bed doubting that I would find the remainder of my Cartesian chorus ladies. I have an Adelaide, and Alice, a Marion or 'Marion' and a Maud[e] to add to my list. So, here we go.

Adelaide GRACEY [ELLIOT, Adelaide Celia Gracey] (b St Pancras 30 August 1863; d The Orchard, Southborough Rd, Bickley, Kent 20 June 1963]
Yes, she lived for just under a century. And this is another where her family life is, shall we say, 'interesting'. But on, first to her professional life.
The G&S archive says that she joined the Carte organisation in 1880, and I'm sure that is right, for in the 1881 census we see her, aged 17, in Preston in digs with Marion E Graham[e] and Beatrix M Young.  She was, apparently, still with the organisation as late as 1908, but I also spot her in 1882 in pantomime at Manchester, and in May 1888 touring as cover to Mrs Privett in Dorothy. In the 1891 census, she is home in Wakefield St, St Pancras, with mother, but in 1894 I see her on tour with other members of the Carte Co, in Ireland. In 1901, she is on tour again, sharing digs with Winifred Moore. So, a very long-serving Cartesian indeed. 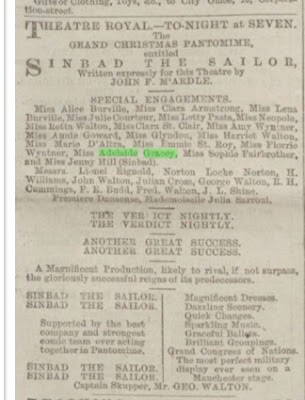 Next, who was she? And what is this 'Elliot'. Well, Adelaide, like all her siblings -- Marion Agnes Gracey Elliot (?Mrs Whitehouse d 28 November 1948), William Andrew Gracey Elliot and Kathleen Gracey Elliot (1868-1874) -- was seemingly illegitimate. They were the children of Marion Celia Elliot (b 25 October 1828; d 1901), daughter of a London typographer, and one Andrew Gracey, an Irishman of various employs (bookkeeper, linen agent). I imagine the couple didn't marry because Andrew had a previous (Irish?) encumbrance.
When her days in the theatre were over, Adelaide married (8 September 1914). She was 51 and her husband was a 65 year-old widower, Frederick Ridg[e]way Griffith (b 1849), a journalist from Erdington. He lasted another twenty years ... Adelaide lasted nearly another helf century. In the 1939 census she is a widow, living at the St Pancras Almshouses in Southampton Rd, but she died nearly another quarter of a century later in Bickford, Kent.

Alice ERSKINE had a life as short as Adelaide's was long, but equally as odd background. She was born in Brighton, allegedly the daughter of one Ellen Erskine née Smith (b Datchet/Langley Marsh 1833). Miss Smith remained Mrs or 'Mrs' Erskine for some years, as she gave birth to another daughter, Kate, registered at Steyning in 1872. Alice is not registered as Erskine, but there are Alice Smiths registered at Steyning in 1864 and 1870. And the odd one in Brighton, but not in 1866. Maybe Alice Ellen in 1869?
It was Kate Erskine (sic) who was the talented singer. Alice went to work as a draper's assistant in a large London emporium, where she can be seen in the 1891 census. In 1891 Kate is still at home with mother, her new ?husband, widowed gas inspector John ??Harrington Mitchell (?1835-1903), and two Mitchell children, Herbert and George. In fact, she is probably at home with the Mitchells, as 'Kate Mitchell' in 1881. But no Alice. So, again, shall we say 'unconventional' background.
Kate played good roles with the Carte, and in 1894 married the nicer of the Tebbutt brothers, Frank, tenor of the company. She would have two children, Norah and Phillip, and a long life, dying in Worthing in 1958. Alice was less fortunate. She remained a chorister with Carte for five years, and died, while on tour, at Oxford, in February 1898. Her death registration said she was 32. Which pretty much tallies with the census where she says '26'. Even if not with the birth record
Her funeral was reported in the Era. Kate and mother were there, Wilkins, Day, Cowling and Moore carried the coffin, Pattrick, Walenn, the Le Maistres, H M Russell, P Carrington and Louie Rene attended .. 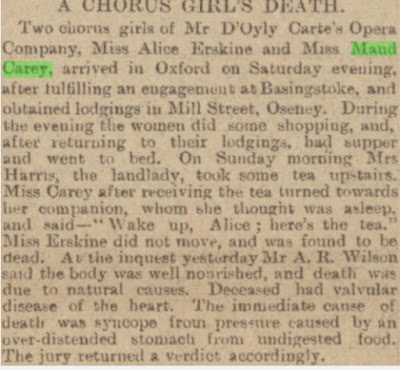 Well, I've left the worst till last. Marion GREY. Played with the Carte companies between 1893 and 1899. I suspect a pseudonym, for she appears in reviews, but not in censi, unless she is the Marion J Grey from Tipperary, aged 22 'tragedienne' in the 1891 census. Which would mean she is not the Marion Grey playing in burlesque and comedy with Charles Sleigh's company at Tunbridge Wells in 1878, but perhaps the one with J C Buckstone and Ethel Selwyn in Charles Buchanan's company in 1888 and F R Benson's comedy (not tragedy!) company in 1889-90. Helena then Hippolyta in his Midsummer Night's Dream, Bianca in his truncated Taming of the Shrew. Then came Charles Hawtrey's touring company (Nerve, Barbara), which included in its ranks one Amy Thornton ... but oh dear! The same issue of The Era which has her touring with Hawtrey, has a Marion Grey singing ballads at Deacon's Music Hall. So I fear we have two of them. No1 continues in 1891 with Ben Greet's A Village Priest, Our Regiment for Alfred Byde ('her fine figure ..'), 1892 Mrs Dexter at Liverpool, The Solicitor in a cast including Mr Duncan Fleet ... while Marian Grey II ('serio') is doing the music hall rounds.
So, which one is going to disappear into the Carte ranks in January 1893? Not the actress. She is playing Hypatia at the Haymarket, then on the road in The Lost Paradise. But in December 1893 there is our Marion playing Lady Ella at Huddersfield. And Marion the actress is in A Life of Pleasure, Human Nature, The Sign of the Cross endlessly in Britain and America  ... So I think we can can that Marion. Is our one the music-hall one? But in 1897 there is the listing for Charles Coborn's Variety company. Miss Marion Grey. Does that mean the are THREE of them ...
Well, our one has shrunk from playing Zara in Utopia (Ltd) to Peep Bo, Constance, Plaintiff et al but she's still Carte-ing and, as our list tells us, classed as chorus.

The actress returned from America and hit another grand role in Princess Flavia in The Prisoner of Zenda (1899) while our girl was touring as Asphodel in The Lucky Star; then Marion I is playing The Tyraany of Tears and our one is ... nowhere. Marion the actress had a long career, stretching into the early cinematic years. I think. Because there are Marion Greys in the American theatre, vaudeville and film, in the Australian theatre ... so what hope have I got of tracking down Mabel of the D'Oyly Carte. Nil.

Maude Car(e)y was a Cartesian from 1888-1898 so I guess this is she. If it is, she's in Penzance with the company on census day 1891 and says she's 26 and born Manchester. Unfortunately, she doesn't say under what name, so it's difficult to track her down. We just have to take her at her word. Or not.
Apart from her appearance in the papers at the death of Alice Erskine, I spot her in 1890 in panto at Stockton on Tees, in 1993 as Peep Bo, 1895 playing Lady Ella (everybody seems to have had a go at Ella) and Casilda in The Gondoliers, in 1896 Kate in The Yeomen of the Guard. In 1897 a Guernsey Maud Carey surfaces playing Mrs Partlett with amateurs but she is of a large local family of singers and players, so I don't think its our Maud. She's on the road with ill-fated Alice. And better than that I cannot do. 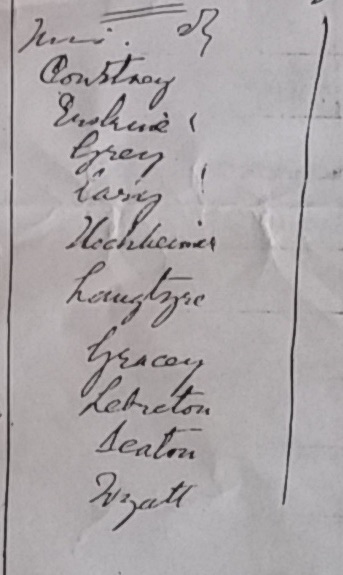