Cartesians: Nessun dorma ... what a night!

.
None shall sleep! Not I, anyhow. Yesterday evening I was tidying up a Cartesian primo tenore when ... well, I ended up with a whole, vast musical-theatre (Cartesians included) family tree. I had to force myself to my bed in the small hours with singers all over my desk ... and if I don't write it down now (next morning) I'll get all confused. So, let's start with the primo tenore ...

It all started with this. It's a salary sheet from the Carte touring company, courtesy of G&S expertissimo George Low ... I've been working my way through it ....  please note that the contralto, the mysterious Millie Vere, is on top whack: ten bob more than lead soprano or lead tenor. So, we note, right down the bottom of the chorus, Mr L Graham. He was nineteen. He didn't stay in the chorus (see David Stone's Archive for details) but rose to be, himself, a Cartesian leading tenor ... so who was he? His birth name was Léon Joseph Antoine Cadenne de Lannoy, and he had been born in Normandy in 1867. His father, who owned the resounding name of Hubert Joseph B Cadenne de Lannoy, was a Dutchman who had installed himself in Britain, married Welshwoman, Mary Leonard, and worked as a 'correspondent' in Cardiff, Gloucester et al. His name probably helped him to be nominated vice-consul for the Netherlands at the Gloucester docks, but the family was anything but grand. When Hubert died in 1890, he left 131L 5s 0d. And Léon, having shucked the family name, went off, in his teens, and became a touring chorister with Carte for a couple of seasons. 'Mr L Graham', alas, was not only his name. There is another floating through the theatre at the same time (The Colonel &c). So I can't filter out what he did before, some years later, he rejoined Carte and began his rise to leading man 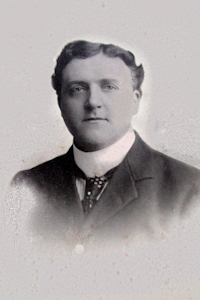 Days before his departure, Léon had married. And, yes, he had married a chorus girl from the Carte company. She called herself 'Violet JAMEISON'. Her real name was Lillian Annette Violette JACOBSON (b Whitechapel 1878) and now the story starts...

Once upon a time there were two Whitechapel Jewish brothers, Solomon Nathan Jacobson (d 1915) and Abraham Nathan Jacobson. They had those nebulous occupations, agent for this and that, but they seemed to do all right. Solomon and Abraham married sisters, Louisa and Josephine Emma Davis, the daughters of John Albert Davis 'cigar importer' and his Dutch wife Julia Keesing. The Davises actually had eight daughters, and three more of them, Lizzie, Emilie and Jane, will come into our musical and theatre family tree in due course.

Abraham and Josephine were the parents of 'Violet' and 'Florence Jameison'. Solomon and Louisa were the parents of Hilda Rebecca JACOBSON (b London 1879). The two cousins, Violet and Hilda, both members of the Carte company, can be seen together in digs (with the Workman spouses) in April 1901. But whereas Violet seems to have faded from the theatre after this job, Hilda was on track to the West End and musical theatre success. She had already had chorus parts in L'Amour mouillé and Florodora for Tom Davis (no relation, as far as I know), she played Pitti Sing et al with Carte, and after her stint with Carte she went on to play panto at Manchester, as Dick Whittington to the Alice of cousin, Florence Jameison (1902), tour as Donna Teresa in The Toreador ('real merit .. an undeniable encore') and take over the part of La Belle Bolero in town, and in 1903 she created the role of Zélie Rumbert in The Orchid (1903) at the Gaiety Theatre. In 1904 she teamed with Ethel Matthews as the very un-ugly sisters in The Catch of the Season. After which she stepped into married life as Mrs Lawrence Rushworth. 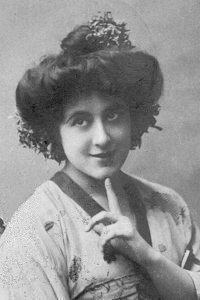 That's the Jacobsons. But the Davises go much, much wider. Daughter no 1 was Angelina Maria (1843) who seems to have married a tobacconist named Wansker and died in 1870, daughter no 2 was 'Lizzie' Davis. Lizzie married, in 1867, a Guernsey gentleman named Matthe Henry Alcock (or Bowden) (1841-1905). Another 'agent'. They had two daughters, Lillian Florence and Hilda Louise, whose births they apparently didn't bother to register. Maybe only in the synagogue. Mr Alcock or Bowden decided to call himself Hanbury, so when the girls came to the stage, they followed his lead.

Lily [Florence] HANBURY (b 1873; d London 5 March 1908) played in Pygmalion and Galatea at the Savoy, and went on to a prominent career as a dramatic actress. She married stockbroker Herbert Guedalla and died two days after a stillborn child-birth at the age of 34.

Younger sister Hilda Louise HANBURY (b 1879; d Cornwall 23 December 1961) followed Lily on to the stage. She played a small part in the burlesque Jaunty Jane Shore (1894), but established herself as a useful actress. She married Arthur William Fox, a gentleman of some wealth, and continued the theatrical dynasty. 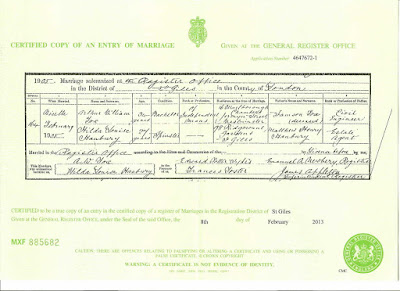 The fourth of the Davis girls, Emilie, married Alexander Richie Neilson, and gave birth to Julia [Emilie] NEILSON (b 12 June 1868; d Hampstead 27 May 1957), known after her marriage to Fred Terry, as Julia Neilson Terry. Her career can be read about in many a book. Her daughter Phyllis Julia Neilson Terry (1892-1977) continued the theatrical tradition, and also ventured into the musical.

Number five was Josephine, number six was Jane Davis. She married cargo-surveyor Charles James Walter Kerin (1847-1886), and their daughters Nora [Maude] KERIN (b Bloomsbury 1881) and Eileen KERIN (b 22 October 1885) took to the stage. Nora married furniture-maker Cyril Aaron Michael and can be seen in Hove in the 1911 census with two daughters, Joan and Daphne, and sister Eileen. Eileen married Valentine Walter Ellis and died in St John's Wood on 13 May 1933. She left a fortune of 41,000L to be administered by her brother, Gerald, and by Ernest Nathaniel Joseph Jacobson CBE -- son of Solomon and brother of Hilda Jacobson. tight-knit family. Nora Michael lived to 1970. 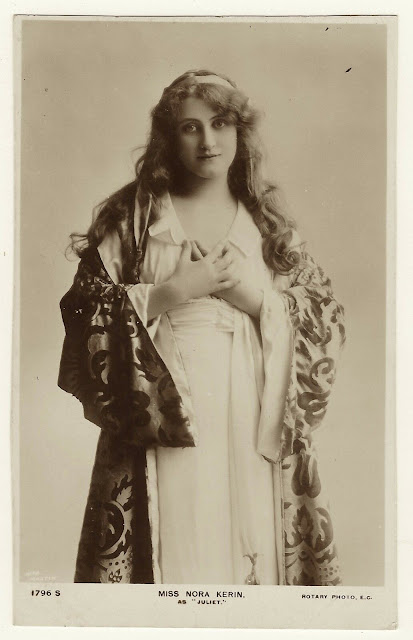 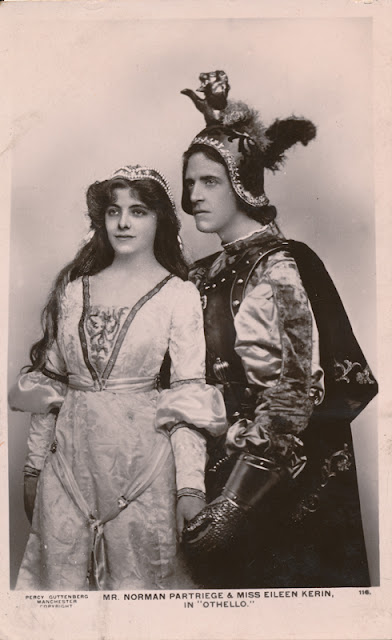 Louisa (1856-1909) was sister number seven, and number eight was Maria Rose whom I haven't followed up.

I haven't gone into all these folk deeply, because the family has been oft written about, and the multiple cousins bred from the multiple sisters remarked upon. But, of course, it is the connection to the Terry family which provokes the most pens: I see that when a present day actress, descendant of Hilda Hanbury, appeared on the ancestry.com show she was said to be 'related to the Terry family'. Well, she is related to the Cadenne de Lannoy family too. But she probably didn't know that.

I didn't spend all day on the Jacobson-Davis family. I fished up some fresh details on other folk, as well. So 'I must write that down before I forget' as Cicely Cardew sang.

D[aniel] S[mith] JEFFERY (b Bilston, Wolverhampton 1859; d London 27 January 1904), son of Richard Jeffery, engineer, and his wife Sarah née Smith. He started working life as a carpenter and joiner, joined the Carte companies in 1884 and stayed there until 1891. He can be spotted at Wigan in 1891 in digs with Elizabeth Mary Matthews and Leonard Roche and family. After his Carte years, he toured as Geoffrey Wilder in Dorothy and appeared as Captain Harold Dundas in Arthur Roberts's HMS Irresponsible (1900-2). He married Carte chorine Ada [Agnes] NEWALL (b Finsbury 1867; d London 1907), daughter of a tailor from Shobdon, in 1891. Unlike her husband, Ada had done a bit before joining the company for the first time in 1890. In 1885 she toured with Edward Solomon's Polly and with Maud Branscombe's troupe in Eurydice. She played panto in Leamington (1885), at Hanley (Babes in the Wood) with Alma Stanley in 1887 and, doubtless, in other like pieces. After Jeffery's death, Ada remarried (1905) the well-off young son of a publisher, Arnold Bell Stock, but died soon after.

Another ill-fated Cartesian marriage was that between choristers Hamilton TETLEY (b Bramley, Leeds 1854; d USA) and Evelyn Alice WARD (1864-1905), daughter of London musician, John Charles Ward. Mr Tetley was one of the sons of William, iron moulder, and Henrietta (née Boothman) Tetley, but neither the most prominent of the sons, nor the most successful singer. The most prominent was the Reverend William H Tetley, and the most vocal was sister Hettie (Henrietta), who, with elder sister, Maria Hannah, supporting, was one of the leading lights of the local; concerts and choral societies. Hamilton worked as a timber merchant's clerk before joining the Carte company (and Eva) in 1884. They toured to the Continent with Carte, were married in 1887, then set out for America with the Ruddigore company. When the season finished, they stayed, and a daughter, Gladys, was born in Canton, Ohio. But at some stage Eva retuned to England, with the child, and Hamilton stayed behind. I see Eva in the 1901 census, working as a singing teacher, and singing at Dalston Chapel ... She died in 1905, and Hamilton and Gladys, a nurse in a covent in 1911, vanish in different parts of the world ...
Oyoy!: 1930: [Margaret] Gladys Tetley b Canton, Ohio ... missionary, Hankow, China ... 1964: Margaret Gladys Hope Tetley, spinster, d 11 September 1963 at St Thomas's Hospital. Executor: John Leonard Dabbs Ward ... that's she!  Now to find father .... Georgetown, Colorado ... naturalised 1904 ... then zilch.

Here's another scion of a theatrical family. Louie CLEVELAND [MEAD, Louisa Elizabeth] (b Plymouth 1866; d Paisley 26 March 1899) was the granddaughter of J D Newcombe, the splendid proprietor of the Plymouth Theatre Royal. Newcombe's daughter, Clara, had married George Richard Mead (1859) and three future theatricals -- Harry, Louie and Nannie -- were born to them. Louie was 'a dancing slave' in Claudian with Wilson Barrett (1884), played in a sketch with Ferguson and Mack (1885) and it seems that she was with the Carte companies from 1886-9. At some stage, apparently, she married someone named Hech[l]er, for in the 1891 census she is at home with her widowed mother and brothers Albert, Arthur and Willie, listed as 'married' under that name. She played in Arbian Nights (1891), Dashing Prince Hal for Fred Wright (1893) with Nannie as her principal girl, Aladdin at the Parkhurst Theatre (1893), Robin Hood in Robin Hood Esq again with Nannie (1894),  before Louie headed for Birmingham and Vesta Tilley, and Nannie to Liverpool for panto. In 1895 it was Prince Amoroso in Red Riding Hood in Wolverhampton. The following year 29 year-old Louie took a job playing Marion Holcombe in The Woman in White for 25 year-old impresario/actor John Hermann Dickson. From here on in, she became Mrs Dickson à la ville ...  Dickson soon fitted her out with a starring vehicle, as Selina Sparks in the 'musical domestic comedy A Merry Madcap (with Annie Bernard and E A White, once of the D'Oyly Carte, in support). It toured for some two years. She revisited the Parkhurst et al (From Scotland Yard), played Dick Whittington at Yarmouth and stock at the Prince's Glasgow, pantomime at Paisley (Aladdin) ... but all was not well. She had cancer. She finally had to undergo an operation, and died therefrom ... the obituaries were long and splendid ... 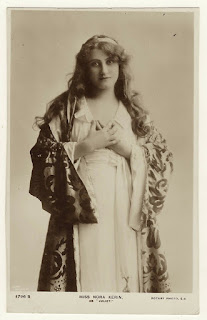 If we want to add to the sad tales of Cartesian marriages, that of two considerable principals can offer an example. Arthur HATHERTON (Arthur Beacham HOLDICH) (b Bordesley, Warwicks x 24 January 1864; d 29 Tavistock Square 11 June 1924), son of Thomas Law Holdich, seedsman, and his wife Henrietta née Martin, started life as a Cheapside warehouseman, married the teenaged Edith [Hannah] BROAD in 1891. I don't know how soon the marriage came apart, but by 1901 he is declaring himself 'single'. She is still calling herself Holdich.

That's my lot for today. Put a log on the fire to keep Minnie and ChiQi warm overnight, nice warm shower, and snuggle up in my luxurious big bed ...  maybe I'll visit Carte-land again in about 10 hours. There are still some unanswered/unanswerable questions on that salary list.