A husband from Hell ... or merely the theatre?

.
I started out, this morning, to spend yet another day delving into the lives of my Cartesian flock ... I was doing well ... sussed out the 'de Lacy' girls, mother and daughters ... noted down the large career of James Danvers ... and then, after a glance at an old shipping list containing the English squad taken to America for the original Pirates of Penzance, I decided to have a go at Billie BARLOW. Anna M Barlow aged 17, on the manifest. I didn't know into what company it was going to drag me ... 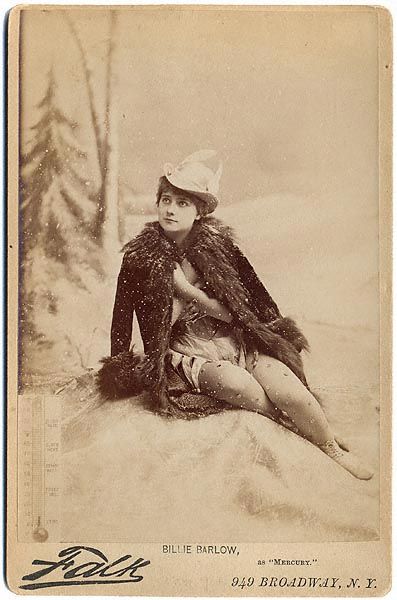 No problem with 'Billee''s antecedents. Anna Maria Barlow was born in Bayswater 28 July 1863 to linen draper Elisha Barlow (1820-1909) from Mutford, Suffolk and his wife Maria Louisa née Richardson from Bristol.  She had an elder brother, Sidney Herbert (1861-1943) and was to have a younger, Thomas Cooper Barlow (1865-1946). So, she was actually but 16 rather than 17 when she sailed off to America, and had been 15 when first hired by the Comedy Opera Company to play in the chorus of HMS Pinafore at the Opera Comique. Given what she later became, I imagine she was a well-developed teenager. Part of what she became sooner, rather than later, was the very obvious 'Billie'. 'Billie or Billy Barlow' was a popular old song. The christening has been attributed to W S Gilbert; I doubt whether that gent would do anthing so ... well, obvious. Anyway, privately she was known as 'Minnie'. 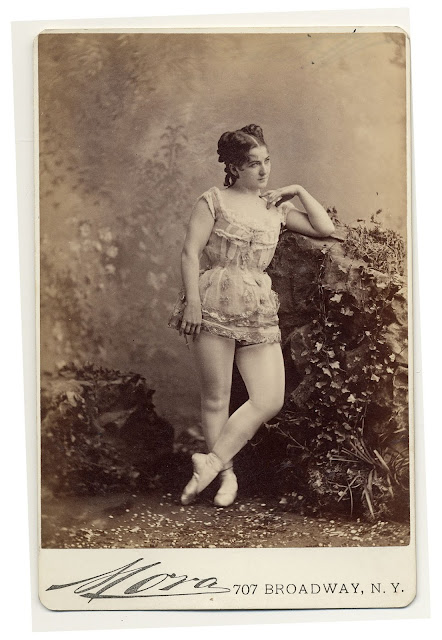 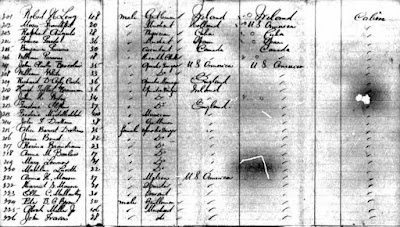 She survived her first trip to America intact, created the role of Isabel in The Pirates of Penzance, and returned to Britain to play further with the Carte company, taking over from Neva Bond as Isabel, and apparently in the chorus of Patience. In 1882 she made a second trip to America (Les Manteaux Noirs, Rip van Winkle, Fleta in Iolanthe), but this time she did not so straight home. She stayed behind, and appeared at the Cosmopolitan (Prince Methusalem), the Bijou (Mercury in Orpheus in the Underworld) and the Casino (Falka, Le Petit Duc, Poppenberg in The Beggar Student, Nell Gwynne, Nanon) in leg-roles until Amorita when she finally got to don skirts. For The Gypsy Baron she returned to legs. And, somewhere along the way she met, and may have even married, a man. I say 'may' because he was at least third-hand goods and, as far as I know, not divorced from his most recent wife. 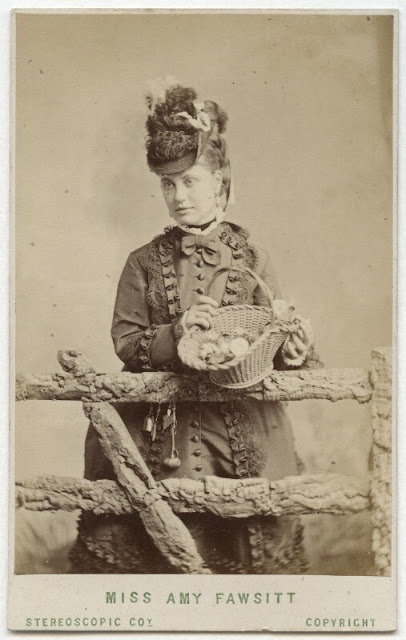 'Everard Stuart' had been the companion of poor Amy Fawsitt, but he abandoned her before her death at the age of 30, and honed in on another big name player. Well, a big name. Not really a player. 'Maud[e] Branscombe' was a celebrated, soulful photographic model, by birth [Amelia] Clara Branscombe (Exeter 1854), daughter of a vicar choral at Exeter Cathedral.  They were legally married in Toronto, as the documents show, 25 November 1876, while Amy Fawsitt was dying in New York. I won't get too deeply into Maude, she's a whole article in herself, and the story of her love/marital life is a catalogue of disasters, but through it all she stayed doggedly on the stage for some twenty years. But by the late 1870s she was already a star model and, I suspect coining it. So a divorce would have made the front pages, just as the birth of her daughter, Gertrude (b St Louis 7 October 1878), did, and many tales more fictional. Sarah Ann Stokes, daughter of a clergyman .. Anyway, when she factually returned to Britain (and it was reported more than once) 'with her child', she made it home just in time for the 1881 census, and there they are with other. Husband has stayed behind to fulfil his post as business manager for Mr Abbey. That, of course, was not all he got up to ... enter Billie. I'll leave Maud here. For the next decade she worked in the British theatre, she married momentarily in 1886 musical director Victor Lonnen, and was back in America, posing on the halls by 1890, and making news by busting up violently with her latest paramour ... No one seems to know what eventually happened to her. 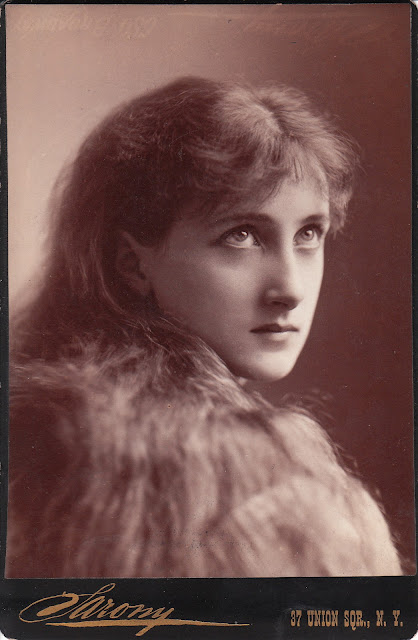 And now, the man. He operated as 'Everard Stuart', but his name was actually Ashurst James Everard Menzies and he was born, seemingly in Aberdeen, 21 June 1849, the son of one Alexander James Petty Menzies (b 12 November 1825; d Western Australia 13 May 1858). Father died in Australia because in 1851 he was transported for the crime of forgery. Mother Hester Ellen née McNeill, previously Mrs John Robert Pringle, died in George Street. Edinburgh 4 February 1863, leaving a 19 year-old Pringle daughter (of whom more anon) and a 14 year-old son, who, the following year was apprenticed as a navigator in the navy.

I don't know for how long he navigated. He is said to have belonged to the Lisa Weber troupe (ditto Maud) in 1878  in some capacity, but the Amy Fawsitt affair shows he did not 'come to this country with' her. By 1883 he is at the Cosmopolitan (ditto Billie), 1885 at the Bijou, already the 'husband of Billie Barlow', involved in an affair of bouncy cheques,... I wonder when (or even if) this marriage happened. Some time after 1881, anyhow, when Billie was at home in London '17, professional singer'. They had two sons, Ashurst Evera[r]d Menzies (b New York 8 October 1883; d 20 January 1954) and Malcolm McNeil Menzies (b March 1885; d Lambeth 1897) which theoretically narrows the time frame for any putative marriage. 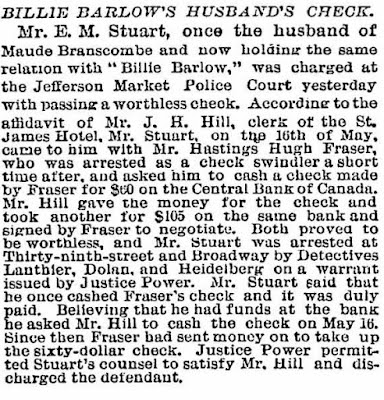 Anyhow, Minnie Barlow (shades of Coronation Street) seems to have tamed Mr E Stuart-Menzies. She kept him for the remaining twenty years of his life (d Norwood February 1905), and 'kept' is probably the right word. After her return to Britain in 1886, with her two infants, Billie, after a stint in Gaiety burlesque, became a star in pantomime and variety. She wowed Australia and South Africa in the 1890s and 1900s, assuredly on large salaries, and hubby went too, as her 'manager'. And mostly managed to keep out of the news. 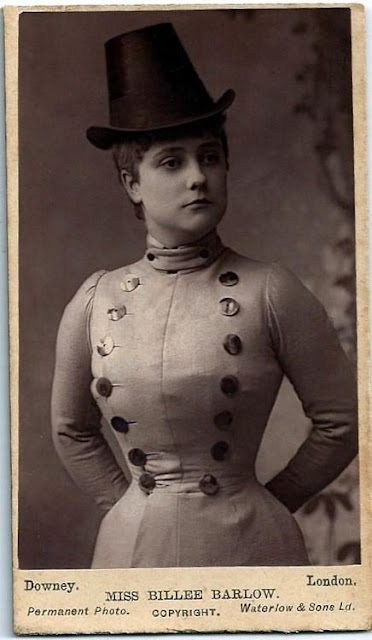 When he died, his other wife was still living. Maud put in a 52 year-old appearance at Emily Soldene's Benefit in 1906 ... and then vanished back into obscurity. Billie carried on working. I see her in 1924, playing in the musical comedy Gabrielle on tour, in 1925 in the revusical Flyaway Peter ...  She died in Ravenscraig Nursing Home in Streatham 11 February 1937. Her surviving son, having restored some respectability to the family name, also ensured its future by fathering a third generation of Ashurst Menzies ...

Oh, the half-sister? Well, Emily Eliza Steele Pringle married well. Her husband, John Gordon, was heir to half the Western Isles. After he died in 1878, she inherited the lot. And married a title. As Lady or Dame Cathcart she 'ruled' the Western Isles from a distance, and made herself almost as hated in Scotland as her father-in-law had been. She died 'of Cluny Castle, Aberdeenshire' 8 August 1932 at Westgate on Sea.