A cache of Cartesians, or pottering in Penzance

.
I'm not sure how I came to pottering around C19th Penzance this week. Doubtless in search of some Victorian vocalist, or other. Odd, though, because I'd had a good go at 1891 Penzance a couple of years ago, rootling out the identities of the principal players of the D'Oyly Carte company which was playing there in census week. With some success:

'One thing leads to another. Always. ‘Geraldine St Maur’ led me to Kate Jancowski-Forster and now she … well, she actually led me to Penzance, where one of the D’Oyly Carte touring companies was performing on census night. So all the cast members were in digs in the town, and were going to fall easily into my net … huh! Kate was sharing digs with Frank [William Line] Tebbutt (25), Frank Lynne (26, born Regents Park), and his wife Mary (23) from Liverpool; James Lawrence Gridley (32) and Henry E Bellamy (28) are rooming together down the road, ‘Louie Lytton’, his wife Henrietta and daughter Ida are there, and Florence J Perry and her sister Beatrice Mary, too … all straightforward?' Well, not quite straightforward, but I'd found what I was after, so I headed back north ...

Of course, a dozen folk do not a Cartesian company make. Somewhere in the streets of Penzance there had to be orchestra, chorus, back-and-front stage staff ... so I had a wee look .. 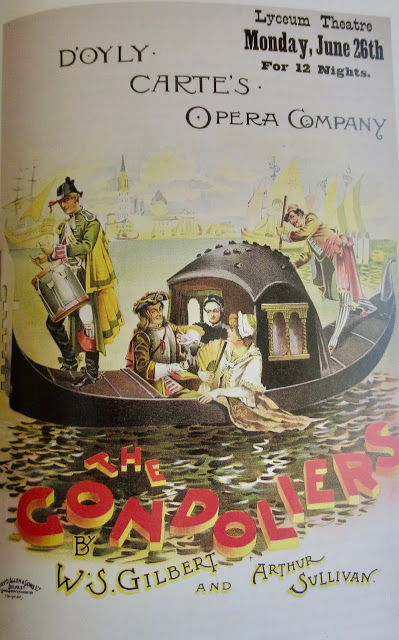 Ely Hotel. A whole list of guests all 'living on their own means'. Joe and Susan Uren or Wren (the enumerator could barely write, and definitely not spell, so all names approximate) from London, George Brand (Dulwich), William R Greatbach (Ireland), Benjamin B Michell (Wales), Joseph Tailor, John Matthews, Frederick Leon from New York, Harry Barron, Fred J Howard (Ireland) ... I hasten me to the G&S Archive, and yes! There they are! But where are the ladies?

Don't need the archive for some of these. Tom Silver is the company's conductor, and his wife Agnes is principal soprano née Agnes Taylor.


That'll do for now, I thought. I'll see what I can find out about this little lot. Any research on Cartesian minutiae has to begin with the works of Rollins, Witt, Low and Stone. If the job has already been done, no point in doing it again.

The Wrens and the Stevensons are not there. Neither is Fred J Howard. Maybe they were just bona fide travellers, or maybe they had stage names. But the rest are. Give or take orthographical error. So we can safely assume that they were all members of the Carte company playing at Penzance in April 1891. But in some cases, that goes against received 'knowledge'. Puzzling. Anyway, here we go.

George BRAND [RUSTON, George Brand] (b Dulwich 22 April 1848; d Coventry 30 April 1898). followed his father, Thomas Ruston, 'of Mark Lane, London', into business as a corn factor, until he decided to become an ageing chorister. Whenever, between 1881 (when he was censussed as a 32 year-old 'commercial clerk, corn') and 1891, that was.

William R[obert] GREATBACH (GREATBATCH, William) (b Gibraltar 1 September 1853; d London 1896) apparently appeared with the company for over a decade, from 1885. Son of army man Sergeant Thomas Greatbach of Galway and his wife Catherine née Hughes, he worked as a clerk until enrolling as a chorister. He died soon after his appearance in the 1896 Savoy revival of The Mikado.

Benjamin MITCHELL [MICHAEL, Benjamin Bowen] (b Kilgerran, Pembrokeshire 1855; d Cardigan 1895) was the son of carpenter David Michael and his wife Margaretta née Bowen. He spent his early working years as a shopman in Tredegar (1871), then a grocer's assistant (1881), before joining the Carte company. He died aged 39.

Joseph or Greene TAYLOR [TAYLOR, Joseph [Green], later GREENE-TAYLOR, Joseph] (b Birmingham 16 July 1859; d 12/18 September 1907) had a different type of theatrical career to his three companions above. He got out of the chorus, into principal comic roles with touring companies (Petit Pierre in Paul Jones, Guy of Gisborne in Maid Marian, Squire Higgins in Morocco Bound, Mats Munck in His Excellency, Charlie Fenn in Newmarket, Cripps in An Artist's Model, Dan Leno's role in Orlando Dando, Heliodorus in A Greek Slave, dame in pantomimes, The Earl and the Girl, dramas The World's Verdict, The Power and the Glory, A Beautiful Fiend) and as a take-over in London's King Kodak. He also, unlike his companions, married. His wife was soprano Grace [Florence] PYNE (b London 23 September 1871; d Ninfield, Sussex 1 March 1949), with whom he played in the Carte company, and in various of the above cited musicals. Grace appeared (under a variety of names) in a small role in London's Great Caesar, as Antonia in A Greek Slave on the road and in many a thinking part. She also bore a son, Reginald Green Taylor (7 March 1891) and a daughter, Muriel Green Taylor (14 September 1893), divorced Taylor for unspecified adultery and swiftly re-wed ... all of which is another story ..

John MATTHEWS (b London c1861) well, apart from the fact that he is married and 30-ish in 1891, and that he spent 2-3 years with the company, and got involved in a disgusting divorce suit (his wife was singer Florence Ellen OLIVER), I know nothing ... 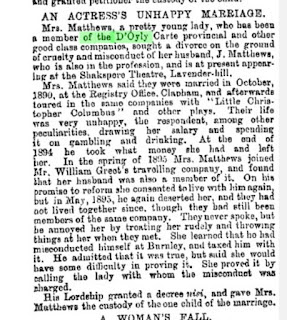 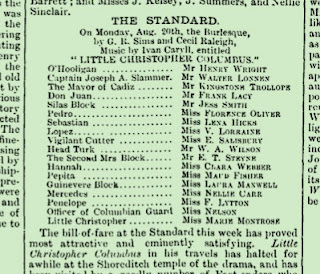 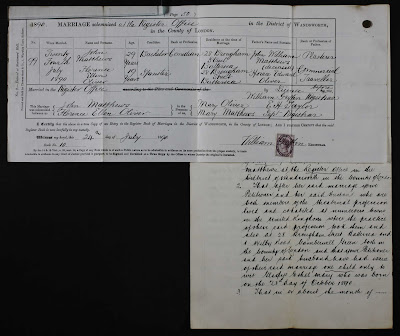 but the next item will make up for the paucity of this one ..

Frederick LEON. Allegedly 23. Allegedly born New York. Such a person may exist. But I beg leave to doubt it. So what am I suggesting? Well, there were two well-known gentlemen in the D'Oyly Carte who sported the surname 'Leon'. One of them was 'Frederick' and 30 years old, the other was 'William' and about twenty-three. And, yes, they were related. Well, they shared an (unmarried, it seems) mother.
Miss Annie Taylor was the daughter of Elizabeth Taylor née Watkinson. Elizabeth was originally an embroideress and dressmaker, but grandmother, Elizabeth Watkinson, was an actress, and still declaring herself as such at an advanced age. Anyway, Annie mixed in theatrical circles -- she was 'actress' in the 1881 census -- and as a result, in 1861, ended up the mother of a son who was christened Alphonse [Frederick] Leon, after his declared actor father. Over the years the Leon gained a acute or a grave accent from time to time, so I imagine the invisible Mr Leon was Spanish or Portguese.
Anyway, little Alphonse, under the name of Frederick A LEON (b Soho 24 November 1861; d. ) duly followed his elders into the theatre, and apparently joined the Carte companies in 1882. Puzzlingly, the whole family is in Glasgow in the 1881 census. The 'whole family', by this stage, includes a little William Henry Taylor, otherwise William Henry LEON, (b St James's 1868; d Savoy Precinct 10 December 1901). The careers of both of the Leon semi-brothers with the Carte orgnisation are well documented, Fred as a stage director, William as a principal player. Less well documented is that of 'Madame Leon', costume maker and wardrobe mistress ... mother, Annie (d Hampstead 1926). I wonder if Annie were also the 'Annie Taylor' who played in Babil and Bijou and, between 1875 and 1879, could be seen in the music-halls 'character vocalist and burlesque actress' with little 'Master Willie Taylor, comedian, vocalist and actor' ... the nine-year-old future W H Leon?.

Fred Leon apparently wed or 'wed' a lady named Lila of who I know nothing. I last see her and him heading back from Capetown in 1906. William married into the Carte 'family'. But also into another famous family. His wedding certificate to Carte mezzo May Georgina Roney (already the mother of his (?) daughter) bears the autograph of Charles Dickens and Georgina Hogarth. Why? Because Georgina's sister was née Miss Helen Hogarth, inveterate London concert-giver, wife of Mr Richard Cusack Roney. Oh, after William's death, May shot off to Jersey and gave birth (1905) to a little Harold Dixon Roney who died. So, not a conventional family.

And which Leon, if either, is the one in Penzance in 1891. I think William. But May is with a different company, and pretty soon they (?) are going to combine on that daughter. Fred, I suspect, is in America with the Gondoliers company ...

Harry BARRON (b London) doesn't seem to have stayed with the company for long. Or any company. He went from being an understudy with Carte to understudying M R Morand in Leonora Braham's tour of The Duke's Diversion, and thereafter made the occasional visible essay including a small part in A French Maid tour.

Maud CAR[E]Y (b Manchester c1865) Whatever her real name was, Maud sang with the Carte companies, more on than off, for more than a decade. Presuming that she wasn't the Maud Carey who sang Mrs Partlett with the amateurs in Guernsey and seems to have fashionably wed down there, she may have been the Maud Carey who sang Tessa with the Derby amateurs in 1894. She made the news when, in 1898, while on tour, her digs mate died of heart failure.

Kate MACFARREN [MACFARLANE, Kathleen née MASON] (b Worcester x 21 August 1859; d Lambeth 1931). One of a healthily sized faily of music-teacher Robert Humphrey Amphlett Mason and his wife Lucy Smedley née Turner, Kate was married, young, to one James Handel Stevenson Macfarlane (Carte chorister name: James H Macfarren 'born Paris') in 1881 and gave birth to four children in record time. She is seen here, still with (or again with) the company in 1891. In 1911 she lists herself as 'actress, musician, 47, married' and under infirmities shes has listed 'alive'. By 1883, her husband was listing his job as 'newspaper critic'. I can't find the newspaper.

[Emily] Lindsay GRAY (b Peterhead, Scotland 28 June 1868; d unknown). I am sorry not to have sorted this one completely. But her time with Carte seems to have been brief (see G&SA). However, she went on to a fine career which improved with age and character roles (The Gay Parisienne, Newmarket, Kitty, The Skirt Dancer, The Dear Girls), moving into early moving pictures and stretching as far as the 1920s, when I spot her acting at the Ambassadors Theatre, London (1924).  She married the comic actor (ex-journalist's apprentice!) and vicar's son, John Sebastian Smith (b Southwell 1869; d 14 January 1914), mothered Marjorie Lindsay Smith (31 March 1902) and ... Sebastian Smith's entry in The Green Book 1907 makes no mention of wife or child, but in 1919 when he heads for America his contact address back home in 'Mrs E L Smith, 5 Wallington Mansions, Upper St Martin's Lane'. He was still broadcasting in the 1940s ...

Well, there we are, a portion of Penzance on a platter ... my little contribution to the massive work of the four gents named at the start of this article ..

And unfamiliar folk like Jessie Bell Lupton (b London City 14 August 1866; d Reading 16 September 1959), who was back home by the 1891 census, along with sister Nellie -- both labelled, for the nonce, 'operatic singer' -- who witnessed the Belfast marriage of Harman and Miss Pennington, along with 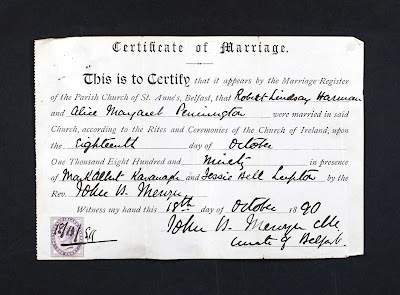 Let's go out with a picture of American soubrette Miss Cora Tinnie, who was plucked from the ranks of E E Rice's extravaganza companies to play with the Carte, and even exported for a couple of years to England, before apparently ending her underdeveloped career ('her good looks are considered an atonement for her lack of voice') around 1898 in California. 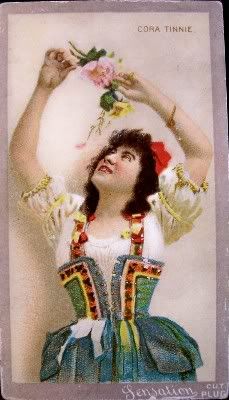 Posted by GEROLSTEIN at 4:03 PM

Here's another Gilbertian connection to Penzance, from twenty years earlier.

The Harvey parents were a couple of hours away at Harvey's Hotel in Plymouth. Mrs. Harvey died from TB a month later when they were all back home in Essex, where Mr. Harvey had a shipyard.

Eight years later, young Jack was taken by his father to see a performance of The Children's Pinafore at the Opera Comique and caught the theatrical bug. His father hadn't anticipated this sort of career for his eldest son, but was building a yacht for a certain Mr. W. S. Gilbert. Who better to ask for advice?

Mr. Gilbert advised young Jack to take lessons with veteran actor John Ryder (1814-1885). After some years, Jack joined Sir Henry Irving's company at the Lyceum, had a massive success with a version of A Tale of Two Cities in 1899, and was knighted in 1921, becoming Sir John Martin-Harvey.