.
This kind of thing doesn't turn up very often, so I thought I should preserve it here for posterity.

The Messenger Boy was one of the most successful of the Gaiety Theatre musical comedies, which followed In Town and The Shop Girl on to the West End stage at the end of the nineteenth century. Like its predecessor, A Runaway Girl, it presented a bundle of comical folk rushing around Europe and its scenic effects in pursuit of ... well, this time it was the titular messenger boy, carrying a compromising letter. Thanks to the star name-value of comedian Teddy Payne, this show was the first of its ilk since The Shop Girl to drop the titivatory 'girl' from its title, and replace it with the 'boy', Tommy Bang, played by Payne, but the mixture was, nevertheless, the same as before. 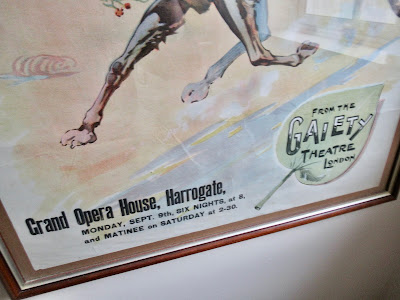 When it came to touring time, there was of course, no Teddy Payne, but George Edwardes lined up some experienced provincial casts to take his show round Britain. This little collection of twenty cards shows us the whole principal cast of one of them, which went out in early 1901.

Tommy Bang was played by Tom Fancourt (FANCOURT, Thomas Richard 1864-1940), nephew of the music-hall singer of the same name, and an habitué of the Gaiety tours and Payne's roles. Here he is, dressed as the messenger boy, and also in a couple of the disguises he assumes in his quest to escape those who would stop him in his mission. 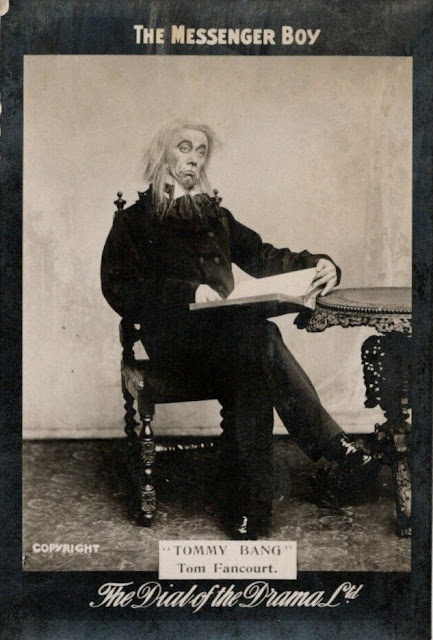 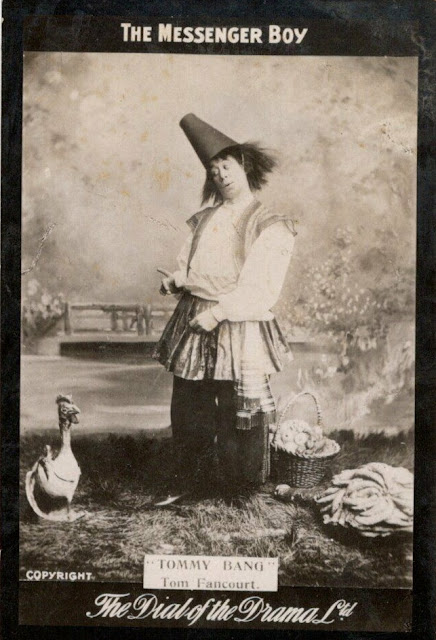 The lady in the story is Nora Punchestown, here portrayed by Lydia Flopp, who had been touring as the title-heroine in The Runaway Girl. Another Edwardes regular, since the days of the original London The Geisha, Lydia was one of the sisters of star London soubrette, Letty Lind. Nora, being the principal girl of the affair, also went through her protean display, including a disguise as ... Tommy Bang. 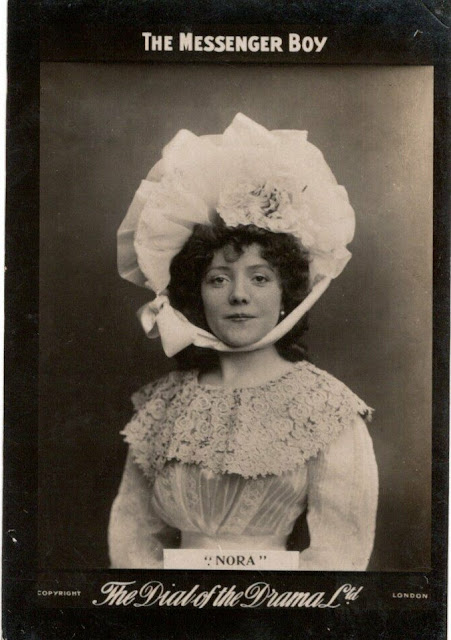 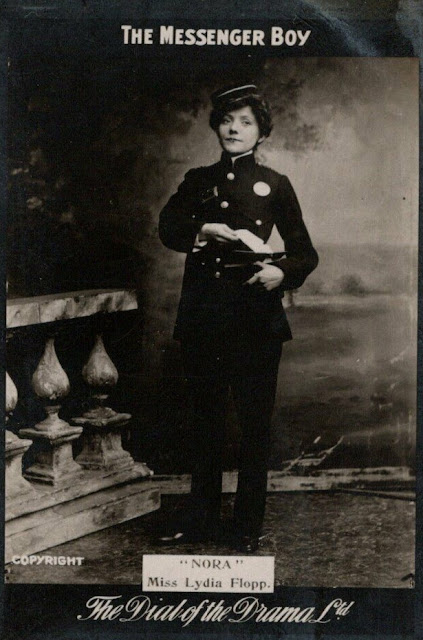 The soubrette of the affair was Nora's maid, Rosa played in town by Katie Seymour and here by her understudy, Florence Lauri, who had toured previously in The Circus Girl and A Runaway Girl ... but who seems to have folded her career after this ... 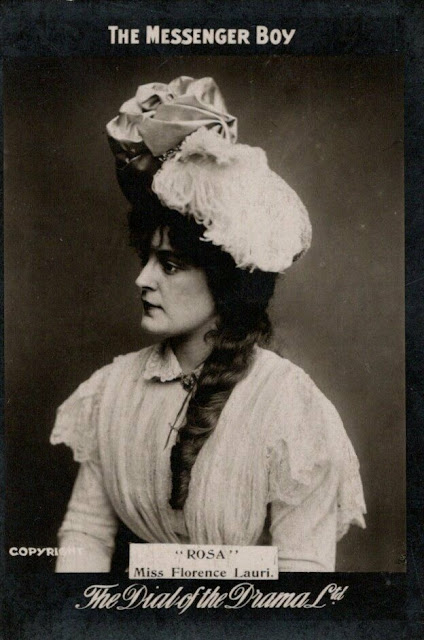 The jeune premier of the story was played by Kevin Gunn, a scion of the Gunn family of Dublin and a son of Bessie Sudlow (and thus a relation of Edwardes) who went on to play in The Toreador in town and on the road, and his villainous rival by J P Spurling. The two can be seen sharing theatrical digs in Derby, where the company was censussed during the tour. 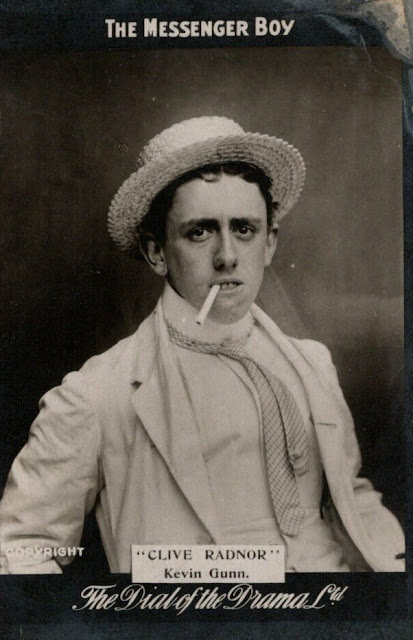 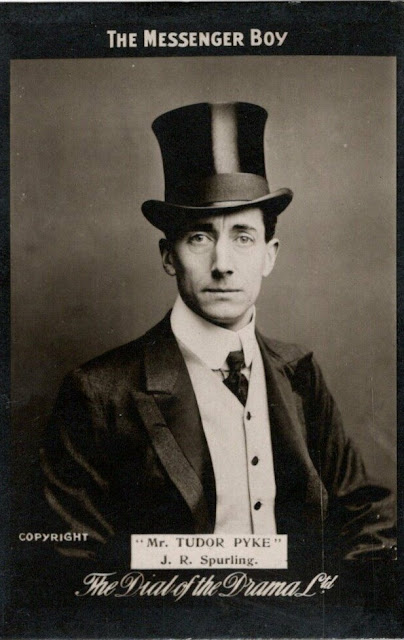 The funny men, who decorated the slight main-line of the story  were headed by Russell Wallett [WALLETT, Russell Gladstone b Beeston, Notts 1867; d Aysgarth, Yorks 9 March 1912] as the uxorious Hooker Pasha 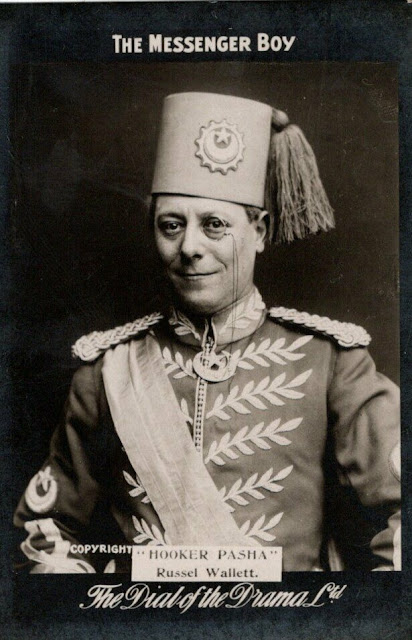 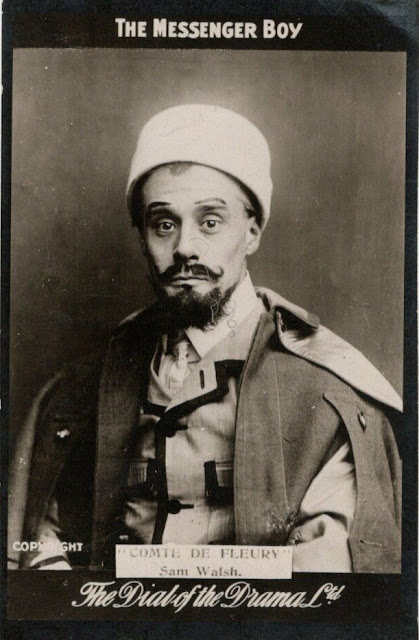 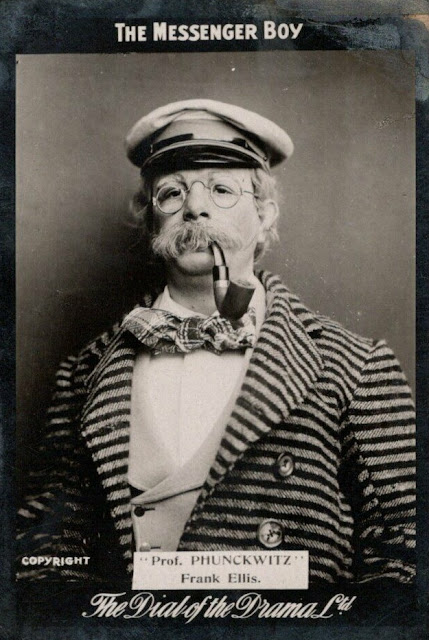 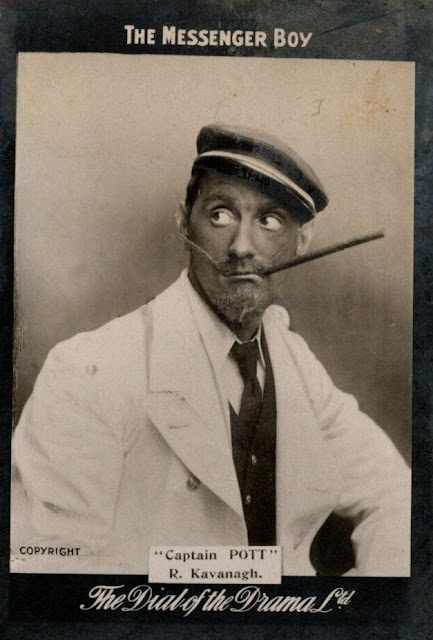 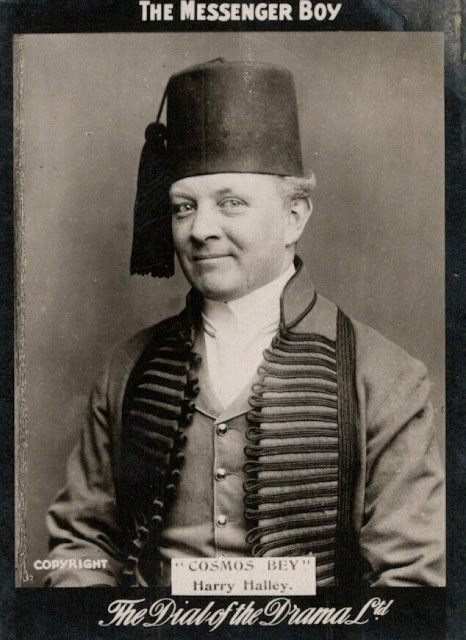 with plenty of help from Tommy's mum, out to catch her errant husband. The role, created at the Gaiety by Connie Ediss, was here taken by Ada Clare [CULLING, Ada Clare; b London 1863; d Bury 31 December 1903] of Larks and Pat fame, recently on tour with Wallett in the Ediss role of Ada Smith in The Shop Girl for Morell and Mouillot. 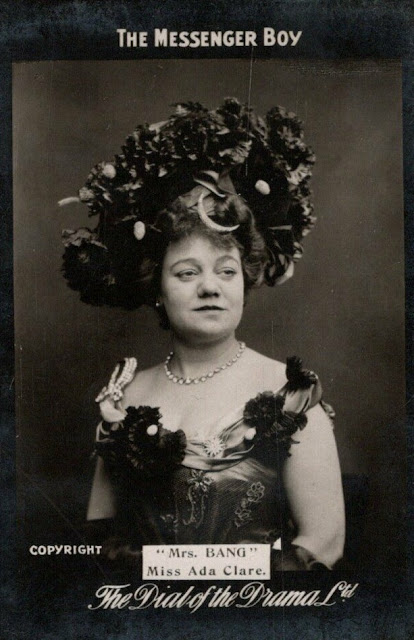 The Punchestowns, Lord and Lady, whose private affairs were at the heart of the story 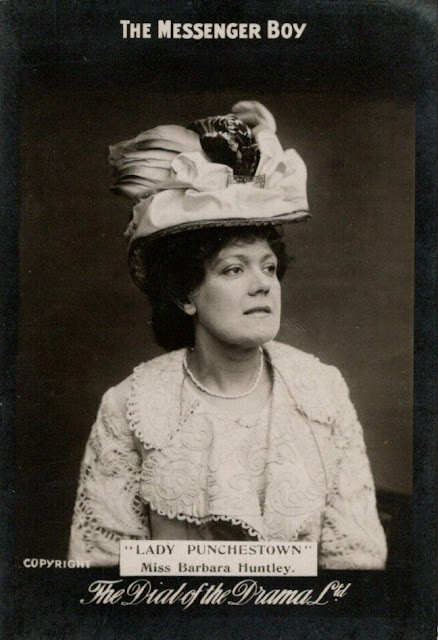 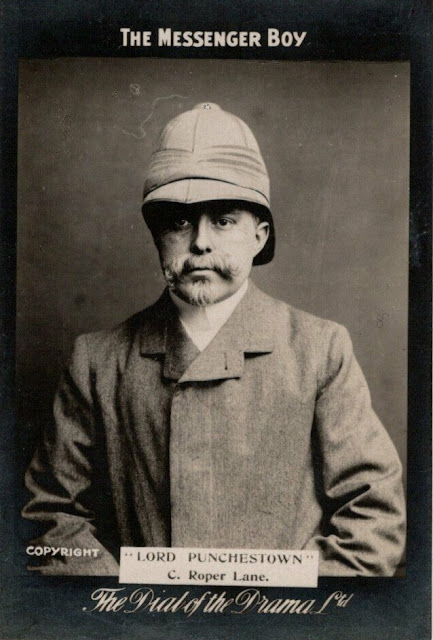 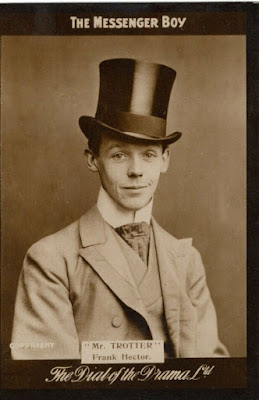 and the small part players got photographed too 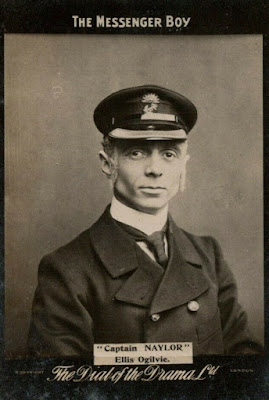 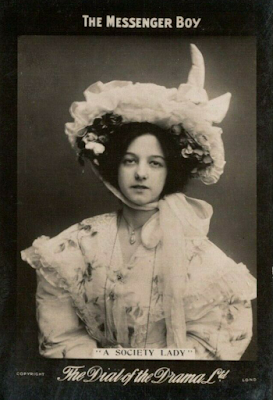 Ellis Ogilvie [OVERBURY, Edward Fox] (b Bromley 16 November 1873; d Tempsford 15 October 1944) had been an understudy in London. He later played George Grossmith roles in The Orchid, The Shop Girl &c and ended up running the Anchor Hotel in Tempsford, Biggleswade. 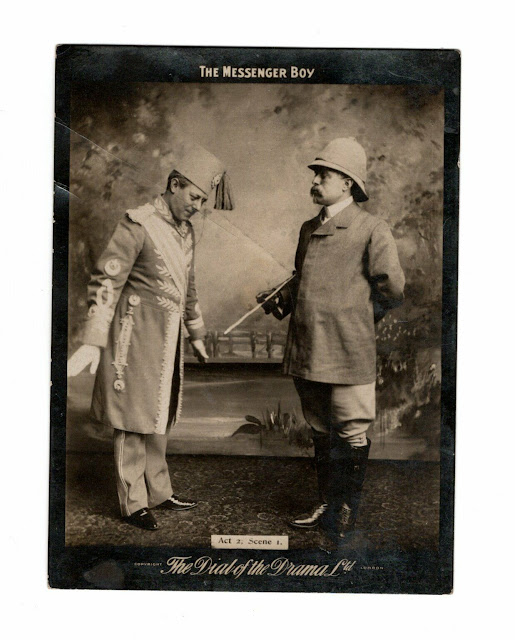 And look what turned up today ... a couple of delightful pictures of the London original cast: 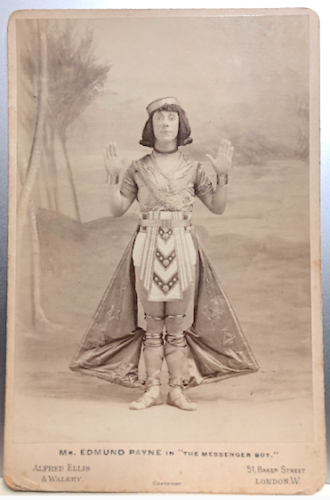 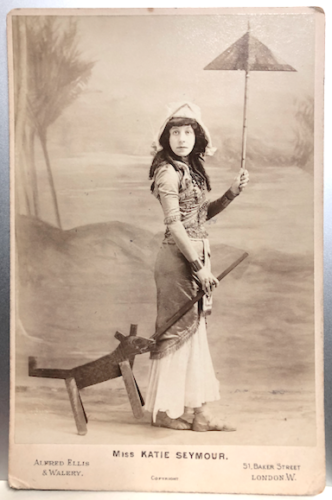 Recorded for posterity! You saw it here first! :-)