One of our girls ... and the odd puzzle

.
It is such a relief to historico-theatrical me, when people think to label photographs ... even if only 'sort of'. Like this one ... 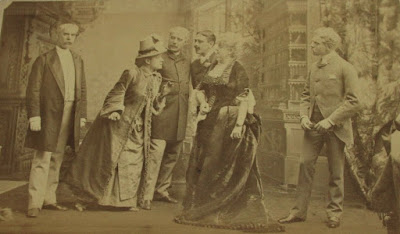 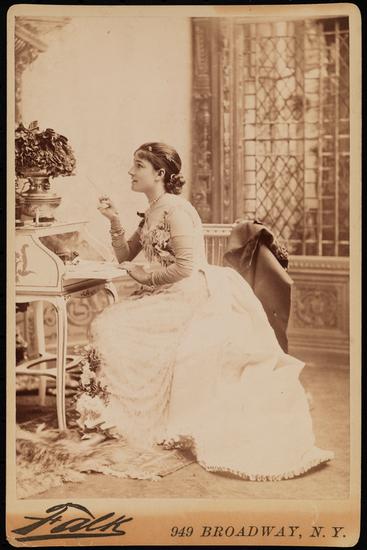 Well, here is Miss Daubray.. and here Sothern without his Dundreary whiskers. .. 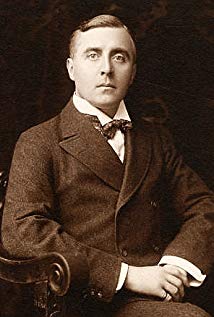 There's a photo in Daniel Blum's Pictorial History of the American Theatre .. so maybe someone who has that book can tell us who is who, here ...

And what about these? Any ideas, anyone? Anyone know an American play with a British bobby, a French gendarme, and half-a-dozen ill-hidden people in a small room ... 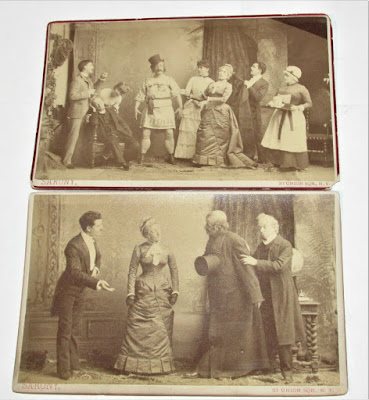 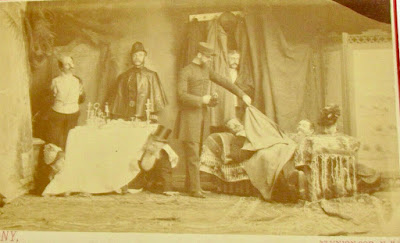 These, alas, are not labelled ... BUT...! The top pair have been identified!  Bravo Allister Hardiman! The play is an American version of Der Raub von Sabinerinnen, produced by Daly, at his theatre, 4 March 1885,  under the title A Night Off, or a Page from Balzac. Cast: Virginia Dreher, Otis Skinner, James Lewis, May Irwin, Charles Leclercq, John Drew, Mrs Gilbert, Ada Rehan ...   that's Leclercq in the Greek tunic, so I imagine this is the celebrated photo of the first act curtain. So we have Mrs Gilbert as the henpecking domina of the affair, May Irwin, of course, is the maid ... the two girls are the Misses Dreher and Rehan, their young gentlemen are Drew and Skinner and I suppose thats the central Mr Babbitt (James Lewis) collapsed in the chair at the unexpected return of his wife.  Which makes the chap in the travelling coat Charles Fisher as the odd Lord Mulberry ... 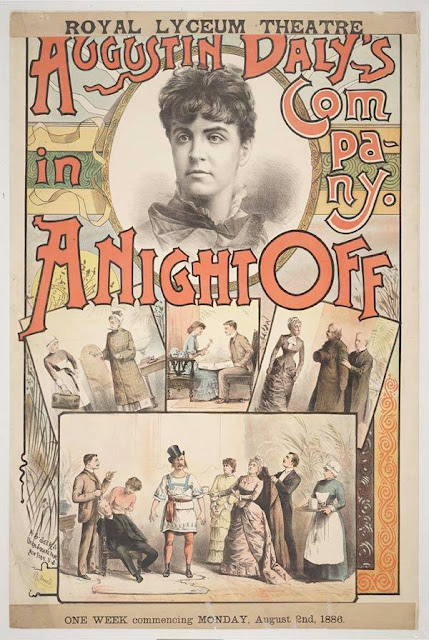 Well, that's three pictures settled on day one. Now, what about this farcical cop play ... is it 1885 as well? 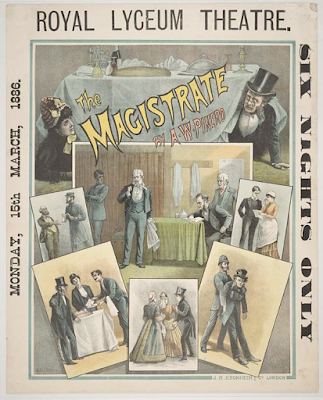 The poster is from the London production, the photograph from Daly's Theatre, New York, and the top illustration is, of course, the clincher. So, here once more we have the comical Lewis, then Skinner and Drew cast not as jeunes premieres but somehwat older gents, and Miss Rehan playing also above her age. That's she, under the table, with Lewis. And Skinner and Miss Dreher behind the couch? So, Drew is either on the couch or in the cupboard ...  Fisher was there, again, too ... but between my eyesight and all that excess facial hair ... Anyway, Augutus Yorke and William Gilbert were the policemen .. I'm not so hot on American juveniles ...  Allister will sort it.

Posted by GEROLSTEIN at 4:11 PM