Victor Warot: a tenor not to be forgotten

.
Yesterday, while looking for something else, I came upon this photograph. Monsieur Warot. I’d heard vaguely of him, mostly as a teacher at the Paris Conservatoire, but I thought I’d google him, to see if there were more to tell. Well, there certainly was: but you wouldn’t really know it. Same old story, one brief piece, whose origin I haven’t bothered to source, copied over and over again, errors and omissions and all, but, mostly, putting (as so often) a wrong slant on a career of which the selective, uncomprehending list of credits give a false impression. 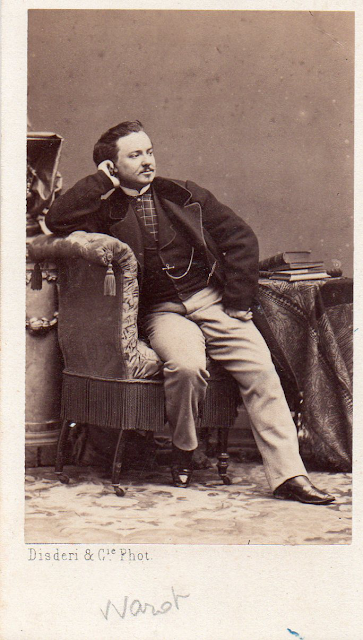 So, let’s start from scratch. His life and career are not that hard to trace, for they took place wholly in his native Belgium and in France. Here’s what I’ve come up with, while waiting for OS Catalina to download.

Warot was born in Belgium, into a musical and theatrical family. His father was Victor Joseph Warot (b Ghent 1808; d Bois-Colombes 17 July 1877) his mother, actress Cécile Desthieux, his uncle, [Constant Noel] Adolphe Warot, a well-known ‘cellist (1812-1875), and a second uncle, [Victor Alexandre] Charles Warot (1804-1836), also a composer and conductor. The father of the three musical brothers, Charles [François] Warot had been prompter at the Antwerp Theatre.
Victor sr worked as a tenor vocalist, apparently of a most all-embracing kind. A delightful pen portrait of him appears in Lucien Decombes’s Le Théâtre à Rennes, playing any sort of role, no matter what the weight, and filling in as an actor in the theatre’s repertoire. It was in Rennes, however, that he closed down his performing career, settled in the town as a teacher, and where Victor jr was brought up an educated. He attended Lycée there and subsequently graduated from law school, and took a job with the banking house of Prost. Which promptly went bankrupt.
When he turned up in the company at the Opéra-Comique, in 1858, the press made much of the fact that he’d exchanged an office stool for the stage, but it wasn’t quite like that. The son had been singing for a number of years already, and Mons Decombes’s book details a concert in Rennes where the young man powered out a variety of tenor plums of all kinds: for he was, indeed, to turn out to be almost as versatile as his father.

At the Opéra Comique, he was scheduled to debut as Raphael in Auber’s La Part du diable, and it was reported that the composer was so taken with the young man that he composed an additional solo for the role, but finally he had his first role as Sergis in Les Monténegrins, followed by that of George Brown in La Dame Blanche, before he got to have a crack at the rather more substantial Auber work.
In 1859, he got to create his first new role, and it turned out to be in one of the hits of the decade: Meyerbeer’s Le Pardon de Ploërmel. Warot was cast as ‘Le Faucheur’ (the reaper) with his solo ‘Les blés sont bons à faucher’). Le Pardon de Ploëmel raced on towards its 100th night, with the young tenor featured, alongside Barrielle, as ‘Le Chasseur’, in their delightful, last-act, roles. 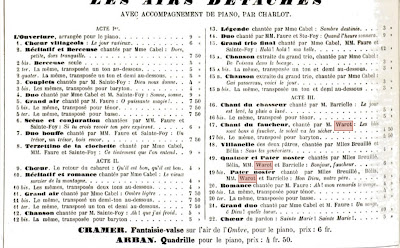 In between, he took up the role of Bénédict in L’Ambassadrice, Jean-Jaques Boulo’s role of Lord Latimer in Une Songe d’une Nuit d’été, Played Luidgi in Gabrielli’s Don Gregorio (17 December 1859), the title-role in Fra Diavolo, Roger to the Petit Chaperon Rouge of Marie Marimon, and de Mergy with the same lady in Le Pré aux clercs, and introduced roles in the little Rita (7 May 1860) and Le Docteur Mirobolan, and, for one night, the unfortunate Barkouf. 1861 saw him adding Tonio in La Fille du régiment, Antonio in Duprato’s Salvator Rosa, and Max in Le Beauté du diable, in 1862 he took on the title-role of Le Postillon de Lonjumeau, and teamed with Marimon in Giralda … and then mutterings began. He was leaving to move into Italian opera. He would use this trick several times during his career. Of course, improved terms were agreed, he stayed, and played Loredan in Haydée, Azor in Azor et Zémire …

An obituary says he played twenty roles at the Opéra-Comique: well, that’s exactly twenty, so maybe I’ve got them all. Because arund the end of 1862, he did leave the Opéra-Comique. But not for the Italian stage.

Here is the time to pause and say that his operatic performances were only one part of Warot’s musical life. From early on, he was frequently seen in concert, singing everything from sacred music to ancient music and, most particularly, the cantatas and masses which flooded Parisian concert rooms. In years to come, he would become surely the most likely tenor to be heard, when a new concert work was tried.

Warot left the Opéra-Comique to go to the Académie Nationale, the Paris Opéra, and he made his first appearance there 4 March 1863, in the role of Tebaldo in Massé’s new La Mule de Pedro. He sang ‘Hameau natal’ and the press exclaimed ‘M Warot a dit l’andante d’un façon remarquable’. It was a phrase which would very often be applied to his performances, to the end of his career.
While concertising in such pieces as David’s Le Desert, Christoph Colomb, Berlioz’s L’Enfance de Christ or Pergoleisi’s Stabat Mater, he took up the title-role of Le Comte Ory, and took part in two operas which would be mainstays of his career: La Juive and La Muette de Portici. However, in La Juive he was cast as Léopold, which Villaret sang the storming role of Eléazar, and in La Muette he played Alphonse while Michot sang Masaniello.

Mons Warot was considered a lyric tenor, and when, the next year, he appeared in the more robust role of Henri in Les Vêpres Siciliennes, previously played by Gueymard, a critic ventured the he had ‘nothing in his face or the nature of his voice to permit him the Great Roles’, but then admitted ‘he triumphs by his elegance and purity of style’. In a few years, the press would be calling him ‘the Heldentenor’. They were already commenting on his refreshing lack of the fashionable French vibrato. 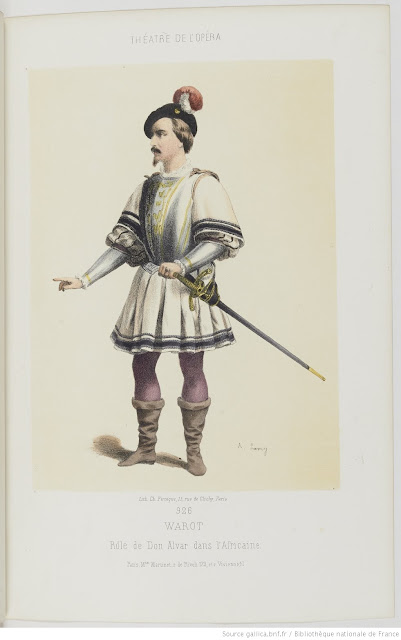 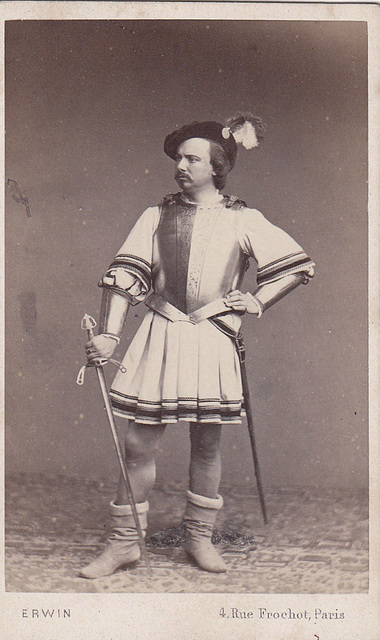 He took up the role of Amenophis in Moïse, introduced the role of Daniel in Ernest Boulanger’s little Le Docteur Magnus, sang Guillaume in Le Philtre and premiered the Roland à Roncevaux (3 October 1864)  of Mermet (Gueymard was Roland, Warot was ‘a shepherd’) and the L’Africaine of Meyerbeer. This time, Naudin had the star role of Vasco da Gama; Warot was Alvaro. But L’Africaine would soon be one of the star vehicles of Victor Warot. In, of course, the role of Vasco, in which he several times depped for Naudin.


And Beethoven’s Mass and Choral Symphony, the Mozart Requiem, Gounod’s latest Mass, and one by Liszt, the Rossini Stabat Mater, Die erste Walpurgisnacht, The Mount of Olives and many more such continued to bulk out his concert schedule, while he took up Nourrit’s role of l’Inconnu in Le Dieu et la Bayadère at the Opéra.

In 1866-7, he took time out from the Opéra to visit the Grand Théâtre, Marseille, and when he returned to Paris he found nothing new bar take-overs in the title-role of Don Carlos and as Ottavio in Don Giovanni. Each time called on in a case of illness, he kept both roles. But his time at the Opéra was coming to an end. In 1868 I see only a revival of Armide added to his palmarès, before he again took to the out-of-town, this time at the Théâtre de la Monnaie in Brussels. Brussels welcomed him enthusiastically (‘its so good to hear a tenor who sings, rather than shouts’) in the lead roles of La Muette, L’Africaine, La Juive (Paris was still asking him to do Léopold), as Raoul in Les Huguenots, Arnold in William Tell, La Favorita, Il Trovatore …

In 1869 he took that repertoire back to Marseille, where Faust was added to the list. Warot was now singing the French ‘ténor fort’ repertoire: he who had been judged, not long ago, unsuitable for such work. So, being in Belgium, where theatre managers were nothing if not enterprising, it was only a matter of time before the adored ‘Duprez de Bruxelles’ tackled the Wagnerian operas … Lohengrin (1870), Le Vaisseau Fantôme (6 April 1872), Tannhäuser (26 February 1873) …
Brussels also produced Jules Beer’s Elisabeth de Hongrie (March 1871), Le Bal Masqué (5 March 1872), Roméo et Juliette (1874), Halévy’s Charles VI which he played with Galli-Marié (1874), Lucia de Lammermoor, La Reine de Chypre, Le Prophète, Faust et al, leavened, of course, with regular repeats of L’Africaine, La Juive, Les Huguenots … until, in 1875, Warot again announced that he was leaving to take up Italian opera. The trick worked again, and it was another year before he quit Belgium, allegedly for Paris and Vizentini’s management. 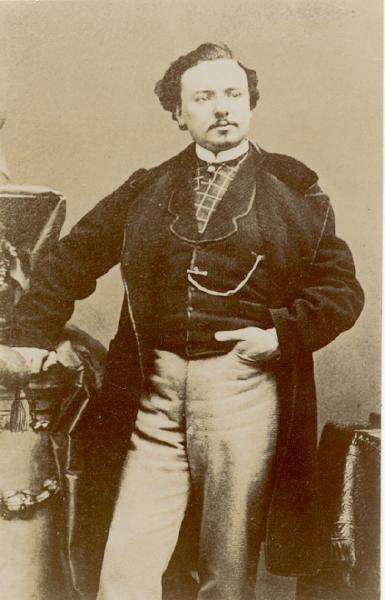 He, actually, ended up taking his star repertoire, L’Africaine to the fore, to Toulouse, Nantes and Angers, and re-establishing contact with the Parisian concert world (Christoph Colomb, Paulus, Delibes’s La Mort d’Orphée), until in 1878 he returned to Belgium, this time to Antwerp. The management at Antwerp, however, was rocky, and fell apart mid-season. Warot took over, on behalf of the artists, and ran the season to its end. 19 April 1879 he produced Gounod’s newly successful Polyeucte. 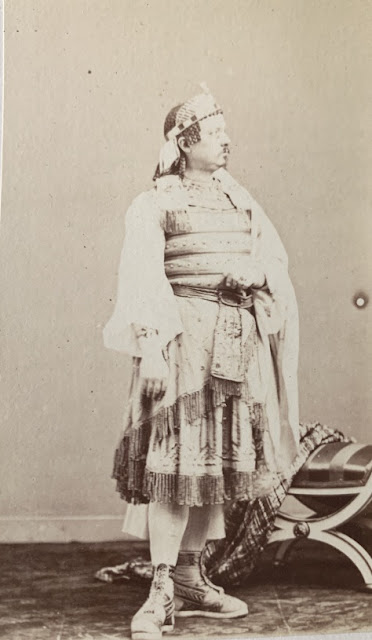 He returned to Paris, and the ‘Opéra Populaire’ at the Gaîte, appearing in Guido et Ginevra and Duprat’s Petrarque in the theatre, and Godard’s Tasse in the concert hall, continued to Nantes and then Geneva (at a reported 5000 francs a month), before once again heading for Belgium. It was Antwerp again, for two seasons, during which the management produced Le Tribut de Zamora, Jerusalem (I Lombardi), Thomas’s Françoise de Rimini, Godard’s Pedro de Zalamea, La Forza del Destino, Robert the Devil and the first French-language version of Rubinstein’s Nero. Warot, of course, was Nero for the ten performances played.

He visited Ghent, returned to Antwerp …


In 1886, he was named a professor at the Paris Conservatoire, in the place of the late Marc Bonnehée. Although he was still to be heard on the concert platform, he now made a second, and no less successful career as a teacher and administrator. He had, already, in 1885, become an Officier of the Académie, in 1903 he was awarded the Légion d’Honneur.

There. I think that gives a fairer idea of the outstanding career of once of France's most interesting and successful tenor singers of the C19th. I may add that he was rarely given anything but splendid and amazed notices, except in his early career when one or two critics sneered at the budding tenor from the Opéra-Comique who was trying to make his way into the roles of their adored 'tenori robusti'. How wrong they were, history shows. History which, in this day and age, seems to have slightly neglected him in favour of maybe lesser men.

Ah, well, that's history. Goes with flavour of the month ...

PS Warot is said to have sung 39 roles at the Paris Opéra. I mention, here, only about 20. So, if you come on a playbill or a review of something I've missed, please send.