Adeline Cottrell spent only a few years on the British stage before her untimely death, but during the last of those years she showed that she had the potential for a remarkable career as a singing actress.

Adeline Martha Clark was born in Hammersmith, London, the daughter of John Clark, a laceman and clerk, and his wife Adeline née Cottrell Williams. Mother was a daughter of one George Cottrell Williams, merchant (b 10 October 1793), and his wife Adeline (née Williams), which apparently made our Adeline a niece to the celebrated actress Mrs Nisbett (Lady Boothby) née Louisa Cranstoun Macnamara ka 'Miss Mordaunt' (b Bethnal Green, 1 April 1812; d St Leonards 16 January 1858). 'Niece' may be a slight exaggeration, but Mrs Nisbett's mother had, indeed, been a Jane Elizabeth Williams.

She is said to have ‘begun young’, to have studied successively at the Royal Academy of Music, with Schira, Sinico and Arditi (only the last of which I can confirm) and to have ‘made her debut at Brighton’.
And, indeed, I spot ‘Miss Cottrell’ playing opposite Cicely Nott in Prince Prettypet and the Butterfly in July 1856, in The Wonderful Woman and as Ariel to the Prospero of Mr Edgar, at the Theatre Royal Brighton in February 1857.

It appears that Miss Cottrell had her first London engagement at the Olympic Theatre in 1857. I spot her playing at Alfred Wigan's Benefit in July, and as the Fairy Benevolentia in The Doge of Duranto at pantomime time. She was Emily Trevor in Boots at the Swan with Vining and Wigan at the Festival performances at Her Majesty's. In 1858 she played Oneiza 'a shepherdess' in the Olympic's production of H J Byron's Mazeppa in which, it was noted 'she sings a difficult operatic air with considerable skill', but, mostly, she played supporting parts and sweet ingénues in the theatre's different comedies (Nine Points of the Law, The Head of the Family, Tom Noddy's Secret, Dearest Mamma, The Scapegoat). As the reviewer said, when Retained for the Defence was produced: 'she had nothing to do but look pretty, and did that remarkably well'. When Brough's burlesque of Medea was produced for Robson she was in the cast, and, when Christmas brought his Alfred the Great, she played a Saxon swain and gave 'some very good songs'. 1860 brought forth the extravaganza Shylock and the festive burlesque Timour the Tartar with which to vary the comedies. Miss Cottrell ended up as leading lady in the last-named, when Louise Keeley caught cold at the last rehearsal. Her vocal contribution included a chunk of La Traviata.
The year provided another event, too. On 8 April 1860, the nineteen-year-old Adeline plighted her troth, at Lambeth, to the singer-cellist John Thomas Haines.

She remained at the Olympic through 1861 (All that Glitters is not Gold, Ticklish Times, A Charming Woman, Plot and Passion, The Times, Court Cards, Sabrina the mermaid princess in The King of the Merrows)  and into 1862, but then took her leave of the theatre where she had spent more than four years, and the young couple set out round the north of England, with the rather older Joseph Henry Nappi as baritone, with their own entertainment of ‘popular duo operas’. Adeline and ‘Enrico’ sang and Haines conducted, played and was manager. Their repertoire was topped by the well-known Jeannette’s Bridal Day (Les Noces de Jeannette) and The Loan of a Lover, but The Students Vigil, A Chinese Fairy and The Rehearsal of a Scene of Grand Opera are less familiar. They ended their tour after the first week in December, and Adeline moved straight back to the West End and an engagement in the company at the St James’s Theatre.

She began there playing the Duchess de Torrenuevo in Faint Heart Never Won Fair Lady, alongside Patti Josephs and Arthur Stirling ‘with great skill and spirit’ and, for over two years (with time out for motherhood) she played with the St James’s company both in London and in the provinces, taking leading roles in comedy and drama. As May in The Little Sentinel she was ‘charming’, as the Lady Audley who had a secret in The Merry Widow she was ‘as startling as she was real’, as Lady Granville in The Dark Cloud 'she showed that her pretty doll-like face is not incapable of expressing varied feelings'. In the revusical Christmas piece 1863 (which featured largely Lady Audley's Secret) she shared the leading roles with J L Toole, and had 'a lengthy song with which to fill up the time required to prepare the machinery for the finale'. When extravaganza time came around, she was Jason in The Golden Fleece with 'a new parody on 'Bel raggio'’. 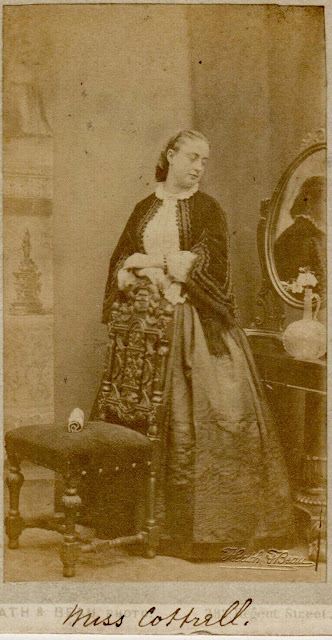 At the end of 1864, however, Adeline Cottrell was engaged for a very different kind of company: the English opera company being set up by William Harrison at Her Majesty’s Theatre (7 December). Louisa Pyne was on hand as prima donna, with Elena Kenneth as alternate, and Anna Hiles amongst the supporting ladies, but the young actress with the splendid soprano voice nevertheless proved very useful. In the opening production of Faust, with Sims Reeves and Miss Pyne headlined, Adeline was cast as a 'pleasing' Siebel 'delightful ... her voice is young and fresh, if rather too light in quality ... she was encored by acclamation in the flower song and made a most satisfactory debut'. Not everyone was in accord: 'she is hardly suited to such lofty company. She is a tolerable actress ... but an indifferent singer ... in minor parts she may be found useful more particularly if she turns her attention to learning to sing'. The grouch, however, was not in a majority. Others avowed themselves 'startled by the effective way she disposed of the minor character of Siebel'.
When La Traviata was staged, Miss Kenneth sang Violetta, when Don Giovanni was produced, Misses Pyne, Kenneth and Hiles took the leading roles, but at Christmastime Miss Cottrell came into her own, when she was cast in W C Levey’s operetta Punchinello (28 December) as the Auvergnat maid, Babette, with the song ‘From Fair Auvergne I come’, alongside Susie Galton and Swift, and, on the same bill, took the principal girl’s role of the Princess Peppermintdrop, alongside Eleanor Bufton and Theresa Furtado, in the theatre’s pantomime, The Lion and the Unicorn.
Harrison fulfilled some dates outside London during the run of his company in the Haymarket, and when he visited Cheltenham with The Beggar’s Opera and Midas it was Adeline Cottrell whom he took along as his leading lady. She sang Polly Peachum and Apollo, and the local press was delighted: ‘She possesses every qualification for attaining a high position in the profession – a handsome face and figure and a beautifully clear voice which reaches the high notes with the greatest facility. Her song ‘Cease your funning’ was a gem and was vehemently encored’.

Back at Her Majesty’s, Miss Cottrell returned to supporting roles – the Fairy Queen in Cinderella, the Bridesmaid in Der Freischütz -- and when, on 31 January 1865, Maillart’s opera Lara was produced she was cast as Casilda, opposite William Terrott in the light comedy tenor role, an acting-singing pairing which would have been hard to better at the time and in the place. There were those who found that she 'compensated by capital acting for her musical shortcomings', but on opening night her 'There in yonder den' was encored. Whatever the loftier critics thought, audiences liked Miss Cottrell.
Lara proved somewhat of a disappointment, and Harrison’s management not very productive, and by May the tenor-manager and Miss Pyne were working for E T Smith in an operatic season at Astley’s Theatre. Miss Cottrell was also engaged as a seconda donna, repeating her Apollo ('Apollo himself could hardly have looked handsomer'), Bridesmaid, and 'a very charming' Fairy Queen’, though Miss Pyne, of course, was Polly Peachum.
The Italian opera company of Mr Mapleson, headed by Titiens, Mario, Santley, Stagno, Foli, Mme Sinico, Mlle Sarolta, Deméric-Lablache and other established vocalists was assembled at Manchester in September 1865, and, amongst its minor members, was one Mlle Edi. Mlle Edi was none other than Adeline Cottrell. She had gone from acting parts at the Olympic and the St James’s to the most Italian opera company in the country.
When the company played a short season in London at the end of the year, she appeared again in Faust. However, with the radiantly pretty and semi-aristocratic Mlle Sarolta in the cast, she did not play Siebel. She was incongruously cast as Martha and the press noted firmly that she was too young and pretty for the part. In November, she took part in Arditi’s series of promenade concerts at Her Majesty’s Theatre, alongside many of the other artists of Mapleson’s company, giving ‘Voi che sapete’, ‘The first violet’, joining Sinicio, Stagno and Santley in the Martha quartet and winning an encore for her 'Kate Kearney’.
Again, in January, she joined Harrison for another visit to Cheltenham (now billed as ‘Adeline Edi’), after which the pair visited Worcester where they played The Beggar's Opera, Guy Mannering, Rob Roy and Midas and she returned to being ‘Miss Cottrell’! ‘[She has] a handsome face and figure and a beautifully clear voice which reaches the high notes with the greatest facility’.
When the Mapleson company left London in the new year, prior to its next London season, Mlle Edi was again a member, repeating her Martha alongside Mario and Mme Sinico, and appearing in such roles as the Dama d’onore in Les Huguenots, Diana in Iphgenia in Tauride, the Freischütz bridesmaid, and Enrichetta in I Puritani.
In May she was scheduled to play Lisa in Mapleson’s La Sonnambula, but, during rehearsals, she was taken ill and died at the age of twenty-five.

With her established acting ability and her increasing powers as a vocalist, it is evident that the young Miss Cottrell could well have expected to become one of England’s most successful singing actresses. Death decided otherwise.

Posted by GEROLSTEIN at 4:10 PM