When I came across this photo, my immediate reaction to the rather-endearing couple pictured therein was 'ah, right, minor English entertainers ... sketch artists, maybe .. mother probably sang'. Piers and things ....  So I went looking, and ... 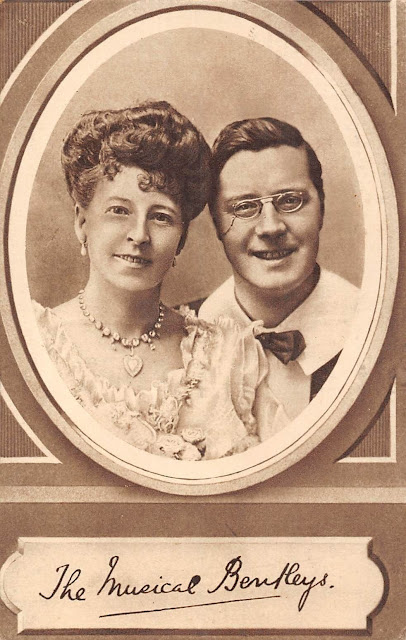 He was Benjamin Dwight Coonley, son of Holland Chadwick Coonley (1834-1919) of South Bend, Indiana. But father Coonley spent time in Australia, married Australian  Helen Mary (d 1908), and young Ben was actually born 7 February 1879 in Townsville, Queensland. His brother Charles Coridan Coonley had been born in New South Wales. Mr Coonley apparently worked as a carpenter. Anyway, Ben was not Australian for long. In 1881 the family moved to California, and they can be seen in the 1900 census, at 91 Clay, where 21 year-old Ben is working as a lithographer. Father is now an insurance agent.

But he's already got the showbiz bug. And he's performing locally. I see him at the Olympia Republican Club, 'an adept on the xylophone' in 1898 and thereafter.

She was Alice Dora Helms, born San Francisco, 27 January 1880, of a father, teamster Friedrich Helms from Hannover, Germany and his Irish-American wife, Kate.

The two of them moved quickly after that 1900 census. By June, they are in Baildon, Yorkshire, proffering an entertainment as 'The Musical Bentleys'. But they seem to have been there the previous year too with their 'musical melange, cinematograph and living marionettes'. The cinematograph was a 20 foot film of Kissing in a Tunnel, which they soon sold off ('only slightly damaged') as they advertised 'Wanted: piers, gardens, on shares or certainty...', adding 'FOS' to their description. 'From overseas' as the picked up dates 'This week Helmsmore, Bradford, Keighley, Haslingden, Colne ..' 'Victoria Pier, Blackpool'. Madame recited 'The Absent-Minded Beggar', but the part of the act that went down the best was their performance on 'a number of rare and curious instruments' 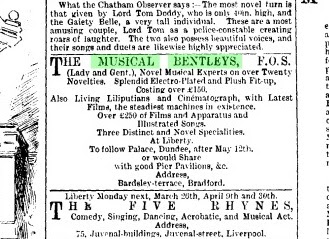 That was the part of the act which Ben and Alice developed, as they trouped the middle-bills of Britain with their 'musical and patter act'

My last sighting of them in Britain is on a bill at Cambridge, in 1918.  But they weren't in Britain all of the time ... in 1917-1918 they were in Australia and New Zealand , exceedingly popular with their 'monster xylophone' ...

They got grand billing when they visited Hawaii, where Ben's brother Charles (1871-1914) lived 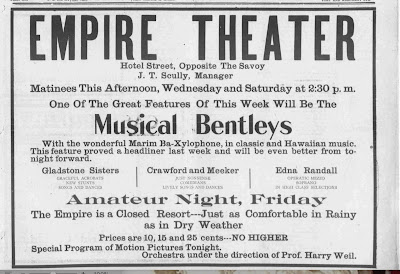 Ben stayed in the profession. In the 1930 census of Maine, Illinois he is listed as 'actor, unemployed, 51'. Alice is hemsticher 50. Yet I see an advertisement from Winnipeg advertising the Musical Bentleys with the world's biggest marimba ... and again in 1947 .. maybe they passed on 'the act as known'?

I guess it was her heirs who sold the family scrapbooks, diaries and photographs on ebay ... I hope they found their way into a museum ... 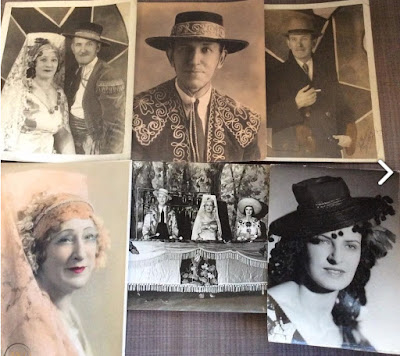