Some very fine Victorian vocalists chose to follow virtually an entire career in the blossoming world of the music-halls, rather than on the stage or in the classic concert room. The supreme example of the type was the ‘Queen of the Halls’, Charlotte Russell, who found no need to take up a fancy nom de chant for her remarkable career. But others did. ‘Charlotte Grosvenor’ and ‘Mademoiselle Du Maurier’ were two notable cases. I haven’t yet extruded Charlotte’s real name from the mountain of music-hall mythology, but the Mademoiselle I have sorted out. It appears that she had a bit of an excuse for taking a pretty name for her career. She was born Lizzie Smith.

Her family had name problems, anyway. Her father was a bootmaker, from Cleobury Mortimer, by name Alexander Sidney Smith or Rudge (he kept changing it) (1823-1899), her mother was Elizabeth née Hackwood (m 1845), and their elders seem to have been named Bailey. Ah! I see father was born to an Ann Rudge and no father. Or of Adam Smith, shoemaker … Anyway, there are obviously stacks of irregularities in there somewhere, and all I know for sure is that their first child (8 months old in the 1851 census) was christened Elizabeth Smith, or Smith Rudge, or Rudge, and thus she remained, until she wed musician Robert Griffiths, around her twentieth birthday. 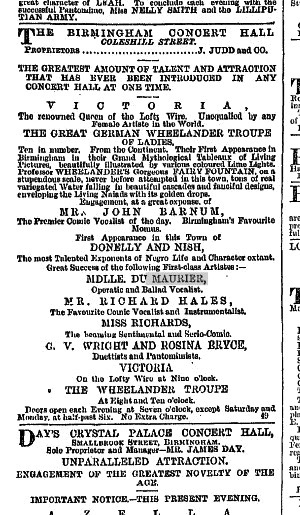 She had, by then, doubtless under the ‘influence’ of George of that name, already become ‘Mademoiselle Du Maurier’. I first spot her singing in February 1869, ‘operatic and ballad vocalist’, on a bill including John Barnum, ‘Victoria the queen of the lofty wire’, a blackface duo and ‘The Great German Wheelander Troupe of Ladies, in their grand mythological tableaux’ at the Birmingham Concert Hall. She was successful enough that she was re-engaged for Easter, and she was still there in July, after which she moved on to the Concert Hall’s Worcester equivalent (‘enthusiastically received’), to Portsmouth’s South of England Music Hall (30 August), and to the Sheffield Royal Pavilion (27 September ‘one of the best sopranos that has visited Sheffield, receives quite an ovation nightly in ‘Il Bacio’ and ‘The Lover and the Bird’). Birmingham reclaimed ‘the Queen of Operatic Song’ to support the Christmas entertainment La Sylphide or the Bluebells of Scotland, with the Lauri family and an ‘Oriental Troupe of Real Indians’, Portsmouth reclaimed their ‘great favourite’ (7 March 1870) and then, at Whitsun, Lizzie broke into the London scene, at the Metropolitan Music Hall.
From there, not much more than a year since her first singing steps, she moved straight to the top of the music-hall heap as prima donna at the Oxford Music Hall, singing in the operatic selections with tenor J W Turner, and basso ‘T J Montelli’, performing the patriotic War Songs scena, with ‘Herr Huske’ and Sailor Williams (‘brought down thunders for her ‘La Marseillaise’ and ‘Mourir pour la patrie’), and taking part in the productions Temptation and The Apple of Discord, which earned her a trip to court under the ‘plays in music halls’ interdiction. 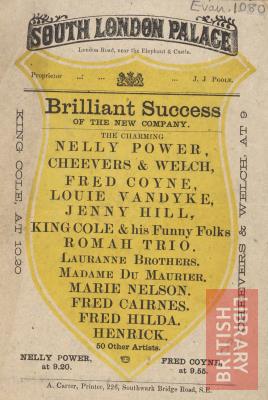 In the years that followed she sang largely in London – the Metropolitan, the South London Palace (‘the Soprano Queen’), the Oxford (singing ‘Giorno d’orrore’ and ‘Mira, o Norma’ with the future Florence St John), the Alexandra Palace, the Alhambra, the Pavilion alongside MacDermott and Arthur Lloyd (‘The charming soprano vocalist Mdlle du Maurier now heads the bill and pleases everybody by her sweet essays in song’), and, at Christmas 1876, ventured on the stage as the Princess Pearl in the Grecian Theatre’s pantomime, Grim Goblin (‘vociferously encored in Sullivan’s ‘Once Again’).

In 1877, she visited Margate’s Hall by the Sea in the season, but she missed pantomime through ‘illness’. The illness was not hers. On 9 December 1877, at 203 Golborne Rd, Notting Hill, Robert Griffiths died, leaving his wife with two young daughters.

She returned to the South London and the Metropolitan at Easter, the Pavilion (‘the company is now headed by Madame du Maurier the operatic vocalist whose singing never fails to win hearty admiration expressed in liberal applause’) and the Winchester, and at Christmas to the Grecian for Harlequin Hokee Pokee with the Conquests and Harry Nicholls. 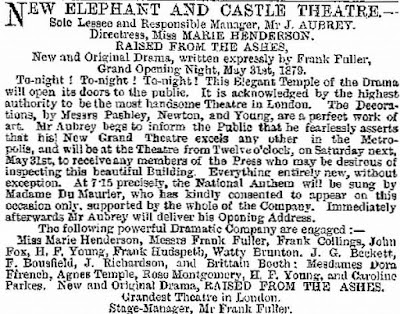 In 1879, after her usual round of London Halls, she ventured out of town to play Puss in Boots with Minnie and Dot Mario at Sheffield, and during the year travelled to Brown’s, the Britannia and the Prince of Wales in Glasgow, to the Blackburn Alhambra (‘has become a great favourite’), Day’s in Birmingham (‘a really good soprano voice’), to Manchester, until Christmas, 1880, found her back for her third Grecian panto as principal girl, Gazelle. The next year, after a highly successful season, from Lusby’s in London, as far afield as Dublin, Dundee, Manchester, Hull and Blackburn (‘a vocalist very far above the ordinary run of music hall artists … has created quite a furore over the last two weeks’) she clocked up Grecian panto number four, this time as principal boy, Prince Lovidovi, in Harlequin Happy-go-lucky, or Truelove and Forgetmenot, alongside a classy bunch of comedy players: Herbert Campbell, Harry Monkhouse, Arthur and Fred Williams, Mary Ann Victor and the Poluskis. 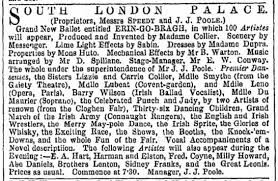 This year, when panto was over, she remained a while at the Grecian (Brown and the Brahmins) before heading ‘with her magnificent singing’ to Leicester to sing ‘The soldier tir’d’ and ‘Lo, here the gentle lark’. Mademoiselle may have sung ballads in pantomime, but her core repertoire was the same English soprano one that was featured in the London concerts. When she appeared again at the Hall by the Sea, she gave ‘Bid me discourse’ and Mendelssohn duets with Mrs Roeckel. When she revisited Sheffield, for Jack and the Beanstalk, it was ‘The Blue Alsatian Mountains’.

Manchester was still calling her, fifteen years into her career, ‘a soprano of exceptional merit’. But she was slowing just a little. She sang at Belfast, South Shields, Birkenhead, Preston, Dublin, Glasgow, Stirling, pantomime at the Theatre Royal, Bristol (Dick Whittington 1888, with her young daughters), now cast as a first-class singing fairy, until someone got the idea that she should do this sort of thing all year round. In 1889 she went around the provinces with troupes playing Fra Diavolo (up to date), with Edward Lewis, Titania (singing 'Bid me discourse' 'a real musical treat') in Cinderella up to date with Ada and Addie Blanche, Jack Sheppard junior (as Sir Rowland Hardman), again with her dancing juvenile-duettist daughters, and other imitations of the Gaiety new burlesque. At Christmas she was an operatic Queen of Hearts in Puss in Boots at the Birmingham Grand.

In the 1891 census, she is home with the family in Wolverhampton and, by now, she is little seen in London. But she was still working. I see her touring as another fairy queen (with aria) with the pantomimists, the Milton Rays, in Robinson Crusoe, I see her delivering ‘The Jewel Song’ to a grateful Walsall, I see her top-billed at Aston’s Lower Grounds in 1895, and in 1899 at Ramsgate’s Marina Theatre of Varieties …

But her presence back home in Wolverhampton appears to have been due to the fact that she was re-wed there in 1893. Her husband was a sadler and leather worker, and a widower, ten years younger than Lizzy. But I don’t see Mr James Postance again after the marriage. In 1901, his wife is living alone, in Bridlington, teaching music. In February I see Mrs Postance (soprano) singing at an organ recital at Bridlington’s Priory Church. 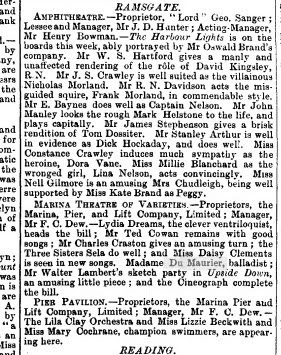 Both the Griffiths daughters, after their start as juveniles (Marie Clifford’s Spanish Serenaders etc) continued in the theatrical business. Louise Edith married a clever gent named Walter Hibbert Lambert (1869-1948), who worked a successful ventriloquy and lightning-sketch act under the name of ‘Lydia Dreams’. Louise can be seen, for a short while, appearing as Mrs Dreams. But she died young (7 Overton Road 18 April 1902).

Lizzie went to live with the Joneses for a while, but it was back in Wolverhampton that she died, in 1915. After thirty years of song …

Posted by GEROLSTEIN at 9:37 PM