The contralto known simply as ‘Miss Dews’ had a full career, in the provinces and later in London, but remains known, today, principally through her gramophone recordings. 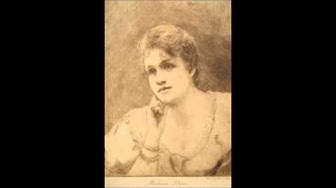 Elizabeth Dews was born in Wolverhampton, the daughter of locksmith and town councillor John Dews (b c 1826; d 1 June 1885) and his wife, Elizabeth née Westwood (1828-1876). Her early life has been well and truly obfuscated, even during her lifetime, by Messrs Brown and Stratton (again!) in their annoyingly unreliable British Musical Biography. They state (and have been duly copied) that ‘while still a young student she appeared a performance of Elijah in Birmingham in 1884’. Well, in 1884, Miss Dews was heading for 30 years of age, and she had certainly been performing for several years before that. Whether she was ‘trained in Birmingham’ as the same writers say, I cannot tell, for she doesn’t seem to have been, advertisedly, a ‘pupil of’ anyone, but the first report that I have found of her performing in concert is right where she started, singing a solo in a selection from Patience at one of local impresario H T Bywater’s Saturday Night concerts (28 January 1882) at Wolverhampton’s Agricultural Hall.
In September 1883, I spot her as the contralto soloist in The Messiah in Walsall, and in 1884 (23 April) with the Philharmonic Union of the same town performing Psyche alongside Anna Williams and Bridson. In July of that year she was engaged as vocalist at the Wolverhampton Exhibition Buildings, and appeared in a series of de Jong concerts at Manchester (1 November) and Preston, with Sallie Conway, Eleanor Falkner, Seymour Jackson et al. As for the Elijah in Birmingham … well, there was one by the amateur Birmingham Musical Association (22 November) and one at Leamington, the notice of which lists the whole orchestra but no sub-principals. Maybe there weren’t any. But her name doesn’t appear on either.

By 1885, the name of Miss Dews was a frequent sight on midland bills: at Manchester with de Jong, with J A Cross, at Barrett’s concerts at the Free Trade Hall, and with the local Temperance Choir (The Three Holy Children), in Judas Maccabeus at Bromsgrove, at Preston, the Edgbaston Botanical Gardens, with Rivière at the Blackpool Winter Gardens, at Walsall, and with de Jong again at Falcon Cliff, Isle of Man, alongside Sims Reeves, G H Snazelle and Payne Clarke, in what would become a regular, and highly successful, summer engagement for her. At Christmas she sang in The Messiah at the Albert Hall, Sheffield (‘her first appearance here’, ‘of the Sims Reeves concerts’, ‘perhaps the most pleasing feature of the performance’), and in concert with Bywater at Newcastle, at Birmingham with Holberry Hagyard, for then Philharmonic Union, and at Manchester for de Jong.

She was now in demand further afield, and in 1886 she made a first appearance at Edinburgh (8 February) and at Leeds, in the Coliseum Saturday Concerts, and 16 March I finally find her in Elijah, at Chapeltown (15 March), then singing The Rose of Sharonback at the Sheffield Albert Hall. For summer, she headed back to Falcon Cliff (‘the favourite contralto of the Manchester and provincial concerts’), and continued round the cities and towns of Lancashire and surrounding counties purveying ‘The Better Land’, ‘The Three Fishers’, ‘Annie Laurie’, ‘The Worker’, ‘Dream Stars’, ‘The Chorister’, ‘Daddy’, ‘The Chimney Corner’, ‘The Lost Chord’, ‘O rest in the Lord’, ‘The Banks of Allan Water’, ‘An Old Garden’, ‘There is a Green Hill’, ‘My Bark is Bounding’, ‘Come Back to Erin’, and other contralto pops, interspersed with regular performances of the Messiah (Sheffield, Douglas, Leeds Coliseum, Manchester for Cross, Edinburgh Music Hall, Birmingham etc), The Golden Legend (York 7 December 1887 ‘loudly applauded’, Dewsbury 19 March 1889 ‘pure voice and earnest manner’, ‘fervour and excellent taste’, Birmingham with Nordica, Piercy, Brereton 23 October 1890, Leamington 3 February 1891), Elijah (Upperthorpe), The Daughter of Noah at Colne (22 December 1889), The Woman of Samaria (Leamington Spa 19 November 1889), McCunn’s The Lay of the Last Minstrel (27 March 1890) the Beethoven Mass in C (March 1890). She made a ‘first appearance in Cheltenham’ 20 November 1888, in concert, the next month gave The Messiah with the Birmingham Festival Choral Society, and sang at de Jongs’ pre-Christmas concert in Manchester, where she also gave yet another Messiah. ‘The triumphs of the evening were achieved by Miss Dews in ‘He shall feed’ and ‘He was despised…’. A few nights later she repeated in Wolverhampton. Then at Doncaster. Then Malvern. At Edinburgh again, at Huddersfield … in just a handful of seasons, Elizabeth Dews was roundly confirmed in her place as one of Britain’s best provincial contraltos.

On 11 September 1890, she made a first appearance in London, when shesang at Freeman Thomas’s Covent Garden proms. Her colleagues there were, as often at these concerts, not of the calibre of those such as Nordica, Watkin Mills, Clara Leighton or W H Brereton, with whom she had been singing out of town, but while Signora Colombatti and Mr Harry Stubbs (of St Paul’s Cathedral) seem to have largely vanished thereafter, Sims Reeves and Plunkett Green certainly did not, and Miss Dews was re-engaged at Covent Garden at Lent to sing the Stabat Mater with Nordica, Maldwyn Humphreys and Franco Novara (21 February 1891).
The year of 1891 also featured the premiere of the cantata The Story of Bethany by Sheffield’s Henry Coward (9 March) and a six-week tour with the concert party headed by Alwina Valleria, and including Foli, Orlando Harley, Ysaye, Albeniz and cellist David Popper. In early 1892 she accompanied Valleria on a concert tour in Germany.
Back in London, she appeared at the Crystal Palace concerts, and the Boosey Ballad concerts (March 1893 sq), and when Cowen’s ‘The Mission of a Rose’ was published, it was advertised as ‘sung by MISS DEWS, Hope Glenn, Marian McKenzie, Meredith Elliott …’. The contralto from the provinces had well and truly risen in the pecking order.

Through the next years, Miss Dews maintained her place in the peloton de tête of British contraltos. She returned to the Boosey Concerts in 1894 and 1895, sang regularly at the Crystal Palace (The Swan and the Skylark) and became a popular artist at the Queen’s Hall (Samson with Alice Esty, Ben Davies, Watkin Mills, Lobgesang). She sang at the Albert Hall in concert, alongside Patti, Lloyd and Santley (19 May 1894), and in the commemorative Elijahwith Ella Russell, Maggie Purvis, Lloyd Chandos and Andrew Black (23 April 1896), at Belfast in The Golden Legend (23 November 1894, ‘delectably rich and highly cultivated contralto’) and returned to Sheffield for a special performance of The Song of Bethany (26 November 1896).

Although Lizzie still appeared as ‘Miss Dews’ or ‘Madame Dews’, she had, in fact, been for some years a married woman. She had become the wife (12 August 1890) of Mr David Archibald Parker ‘of Edinburgh’, apparently a gentleman of some standing, whose marriage was described in detail in the Scottish press. Mr Parker died in 1903 (35 Waterloo Rd, Wolverhampton 8 November), by which time he was certainly not well off, and his wife’s career had, if not ended, been allowed to fade away.

In its later years, I see her singing on the West End Pier in Morecambe (1898), in Elijah at the Alhambra (1 October 1899) with Alice Esty and Watkin Mills, at Leicester in one more Golden Legend (26 October 1900 with Ella Russell), and as late as 1907 (Crowntown) and 1909 (Fergustown) in small-town Messiahs. My last sighting of her on a platform is in December 1911, at Leeds.

It was during her later years, too, apparently in 1906, that she recorded ‘O Rest in the Lord’, ‘O Thou That Tellest’, ‘Caller Herrin’’ and ‘Love’s Old Sweet Song’ as what would be her lasting legacy. Behind the ancient recording quality and the rinky-tink orchestral sound, one can hear a seamless contralto voice with a splendidly plumbing bottom register.

Posted by GEROLSTEIN at 3:13 PM

Great to find someone enthusiastic about this forgotten - but excellent - contralto. I saw the 1906 Messiah described as 'not worth hearing', and the bass is certainly weak - but Mme Dews makes nonsense of that suggestion. She is definitely worth hearing, making a real impression as the finest of the soloists, even though Maud Perceval Allen (the first recorded Elektra?) is the soprano...