Little watch ... what ARE you?

.
A few minutes ago I opened a drawer that I haven't opened in many ages, and there was this dear little pocket watch ... not much bigger than a half-a-crown piece 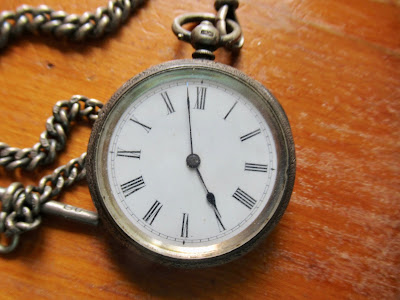 It seems to be made of base metal, it has a classic dial with no markings or name, a fine chain also seemingly of base metal and a weeny brass? and iron key. Now where in heaven's name did it come from. It seems so simple, so basic ... and so small. Is it a lady's watch, maybe? Which lady? 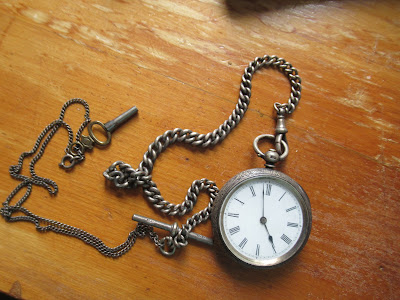 I am almost certain this is not from the Austro-Hungarian-Jewish part of my family. It looks ... well, much more like the practical Perthshire-Scotland side. But how to know? There are no marks. 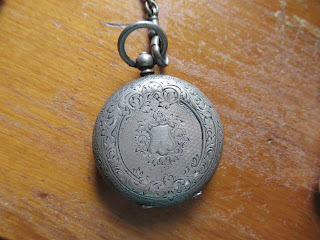 Well, the man on the Antiques Road Show whips off the back to show wonders of mechanisms. So after a few megaminutes of probing to open the back without causing damage (a fingernail and a click did it, nothing fancy) I was presented with ... a blank iron back with two holes. This is so unfashionable as to be fashionable. 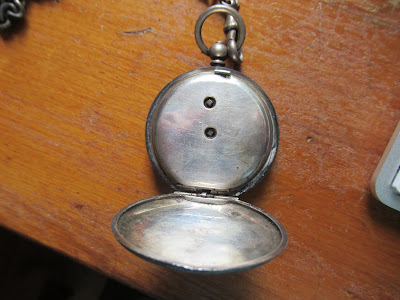 I took the tiny key and put it in the top hole. It wound up! And yes, 30 minutes later it is ticking away merrily. The middle hole changes the hands. And that's it.

But hang on. There ARE marks. But not a hope in hell that my bespectacled eyes can read them. There are marks on the key. It's a number 7. And I guess the 10 or so letters on the other side are a brand name .. 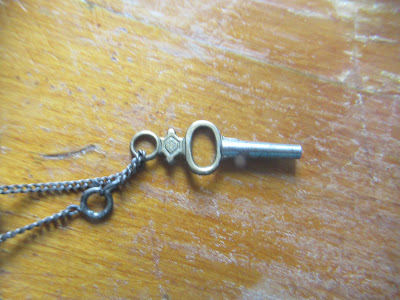 And there are also marks on the case. Impossible. Oh! Quite by accident I have discovered that if I photograph the case with my trusty Canon ... the photo shows them up quite clearly! 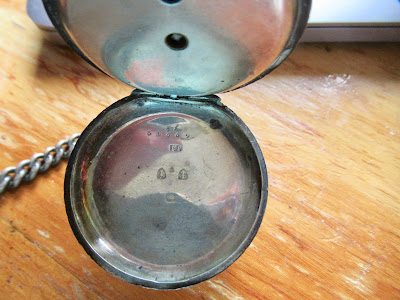 But why does a wee watch like this have so many marks on it?  It would be fascinating to know.

You know, I think it does come from England. And I don't have a single English ancestor. I think this comes from my godmother, Miss Ethel May Christie (d Nelson 6 December 1988), sometime Latin teacher at Nelson College for Girls and paying guest in the Gänzl-Gallas house when I was born. I have an inkling that it may have been her father's. Well, there's no one left alive who would know, so ...

But it's a darling, unpretentious wee watch and, hey, I only gave one tentative twist of the key and it's still going accurately 90 minutes later.

Any help delightedly received!
Posted by GEROLSTEIN at 7:58 PM