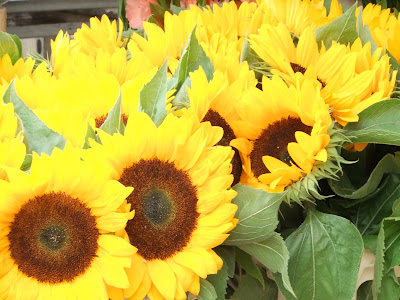 It is summer in Berlin. Everywhere you look, vast bunches of sunflowers symbolise the fact … and I am riding high on Berlin in summer.
So far, it’s been largely Picknicks at number 32, catching up with those friends who aren’t out of town for the holidays: on Friday Kevin and sister Sandra called by, and nephew Maxime got his first taste of Châteauneuf du Pape (‘its never too early’), and Saturday, my dear friend Ollie came and we chatted and drowned ourselves in bubbly way, way past the witching hour and my usual bedtime. On Saturday Paul returned bearing the almost final cut of the CD he has been working on, and no32 became a sound bowl as we listened to the recording which we hope will take Montmorensy, his name and work, to the millions. I am quite staggered with what he has done and, even though I have heard all the material before, I was overwhelmed by the effect of hearing it en dazzling bloc. God, Gänzl, you most absolutely can spot talent! 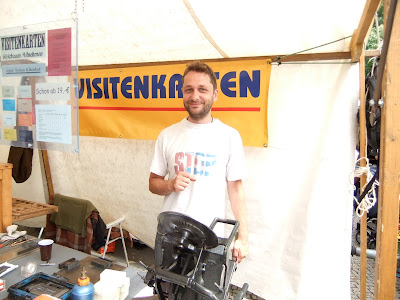 Off to Winterfeldplatz market to buy flowers for my room, to order some more of the delicious hand-made visiting cards I discovered here in April, to investigate the charcuterie and the cheeses and all the other goodies. Tragic, that this market is only here one and a half days a week: if it were permanent I’d be moving into this street for good! Which I even may, yet…

Monday 9 August. I’ve been here a week. And – even though PGB and Kevin are away -- the planning of my summer is well under way. It is going to be a summer of music. It is about time that music found its way back into my life, after those years in the sad wilderness, and I have found myself a very darling Dante (or did Virgil do the leading?) to guide me …
As we nibbled our picknick, after the Montmorensy concert, last week, Paul and I began to plan 'summer music in Berlin’. Well, the bollard outside this flat advertises the Young Euro Classic series of orchestral concerts at the Berlin Konzerthaus. Sounded good, so we pulled up the programmes on the web. Lots of fun stuff, lots of new music, but the concert that leaped out at us was the one to be given by the Joven Orquesta Nacional de España. And it just happened to be on Monday night. It also happened – hey! Kurt the Victorian – to be made up entirely of twentieth-century music.
So this evening, off we set. A little visit to the record store for some educational material – four Händel oratorios and a disc of Janácek piano music. Then to the delightful Café Augustiner am Gendarmenmarkt for a pair of delicious boiled white sausages (me) and a heap of mountain cheese (Paul). And, finally, the Konzerthaus. 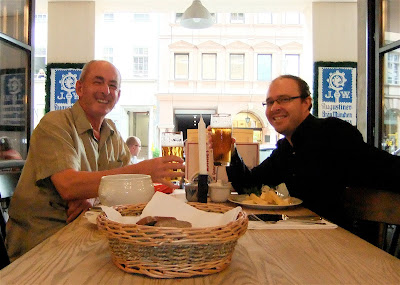 The Konzerthaus still has the old ‘Tageskasse’ and ‘Abendkasse’ system (2 euros cheaper for ‘standby’ tickets with no 'booking fee'), but I don’t know why they bother. The first thing that is blazingly obvious when, having negotiated the horde of little men in red bowties who infest every corner of the magnificent Konzerthaus, doing nothing but look bored, we entered the top tier of the salle (only seats available, 17 euros), was that there was no money in the house. It was assiduously and utterly papered with other young musicians and with members of the local Spanish community. But, as Paul remarked, if you are going to have paper, have Spanish paper: this audience gave the concert a howlingly enthusiastic reception. Which, I am here to say, it absolutely deserved.
However, when paying customers end up in the slips, gazing down on the tell-tale gaps in the papered stalls, it does give an unfortunate aura of unprofessionalism. Some sponsor is doubtless paying the whole jaunt for the young Spaniards.
The air of unprofessionalism, alas, continued a wee bit longer, for after a wholly splendid opening with a specially-written brass fanfare (my second this year!) by Manfred Trojahn, echoing down on us excitingly from the organ loft, we were obliged to suffer twelve and a half minutes of self-indulgent chatter from a certain Herr Lange of the Komische Oper, 'godfather' for the evening. Having quite destroyed the atmosphere created by the fanfare with his banal football jokes, he finally got off and the music was .. at past 20h15 already .. actually able to start. But it turned out to be worth the waiting for. 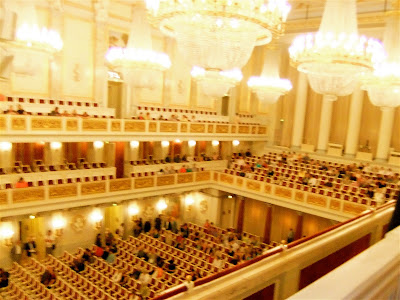 The first piece on the programme was Cristóbal Halffter’s Tiento del primer tono y batalla imperial which, as far as I could work out from the programme (1 euro and carelessly misprinted), is based on 15th and 16th-century Spanish music. It is, however, ‘retold’ here in a thoroughly modern style. I fell utterly, enthusiastically and totally for this picture-piece with its screamingly vibrant clashes between ancient and modern. I have never heard a piece of music which portrays the conflict of man with man so searingly. And the young orchestra flung themselves into its strident and violent emotions with the most amazing vigour and with evident enjoyment.
And now, I was delighted to be up in the slips, peering down over the orchestra, able to watch every soloist and section … unable to take my eyes from the young lady on the contra-bassoon, the much-used timpaniste, or the beautiful-toned horn player …
How to follow such an evident success? Why, with Strauss’s Don Juan. And they quite simply did it again. I don’t think I’ve ever heard this piece played with such warmth and vivacity. ‘This is what orchestras were invented for’ ran irreverently through my head… ‘This is the concert of my life’.
It probably is. Though the second part could never hope to equal that dazzling first. A group of songs by Xavier Montsalvatge, sung by an attractive mezzo, Magdalena Llamas, showed up for the first and only time the disadvantage of our seats. The lady played solely to the radio mike and the front rows: we saw little and heard not much more of what seemed to be an unexceptional group of rather ‘film-musik 1945’ songs, of which a pretty lullaby made most effect. The stalls, I need to record, went mad for the singer. The slips, of course, couldn’t.
And so to the final item on the bill: Petruschka. I’m not sure quite why – everything else had had a Spanish connection. Also it was the orchestral suite manufactured from the ballet music, rather than the real thing, so I – who know only the ballet – did get rather confused. The thing seems rather shapeless without its story and its visuals. But maybe this is part of my learning curve. What Petruschka did do, was allow the whole panoply of young principals each to have her or his moment, and in that it was well chosen, for each and every one of them – especially the wind players, and a remarkable set of horns and cornets – took that moment skilfully and gleefully.

Gleefully: that is what made this concert so special. The young players were so evidently having a most wonderful time making music together, and their joy was wholly infectious. Since the programme chosen was (mostly) marvellous, as well, the result was an evening of the most enjoyable music imaginable.
The audience (and the orchestra!) stamped and cheered and applauded fit to bust at the concert’s end, leading to first an encore with a rather common march, and then – o wise judgement – a repeat of the second part of that wonderful ‘klingendes’ Halffter piece. What a note to go out on! 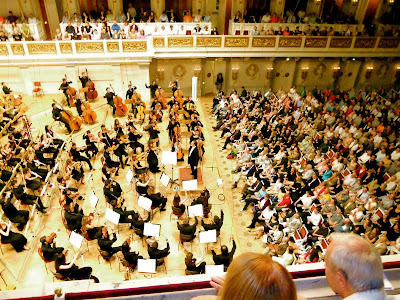 They almost didn’t. In the dreadful habit of this part of the world, the band lingered for just one too many a round of applause, one too many set of bows, and the thrilled atmosphere began to sag as half the audience wandered from the auditorium. But then, in a wonderful finale, the players each hugged his or her neighbour and put a splendid Punkt to the proceedings, a fullstop to a wonderful musical night.
Paul and I proceeded back to the Augustiner for a cold beer, and of course a look to see what other joys this Festival may hold for us – between his music-making and my social and writing schedule – in the days to come…
I wonder if I can make sure that Mr Lange’s peroration isn’t a nightly affair. I wonder if I can get on the ‘paper’ list for Austria or Bulgaria or Azerbaijan. Actually, unless there is a singer, I ... a life long habitué of Row G in the stalls ... might prefer to climb again to the slips ..
Gracious. Music is coming back to me .. I can feel it … I went home on the U2 to Nollendorfplatz singing the tenor aria from the Rossini Stabat Mater! Well, Halffter is a little tricky to hum…
So thank you Spain, thank you Konzerthaus, thank you my Magister Paul ... I think I’m on the road back!
Posted by GEROLSTEIN at 1:42 AM