.
When I said to Anna, let’s go out together and do something ... see something … one day this week, I wasn’t really thinking of something like FischGrätenMelkStand.
Because that sort of thing is way, way outside my experience. Even Ian, who loved modern art, who used to traipse me round the Galerie Maeght, and who once made me stand and look at a vast and ludicrous Jackson Pollock in Venice (he did apologise later) would, I think, have been a bit puzzled in the presence of FischGrätenMelkStand. But, how do you know if you don’t try?
So I put on my walking shoes, and headed off through the city – tiens! there’s the Gendarmenmarkt! I am beginning to see how Berlin’s bits fit together – to the Schlosspark and its Temporary Kunsthalle. It is temporary (and due to be demolished this week) because the whole area where the old ‘Schloss’ stood is under reconstruction. It would make a nice park, I thought, but I fear it is going to be a ‘reconstruction’. 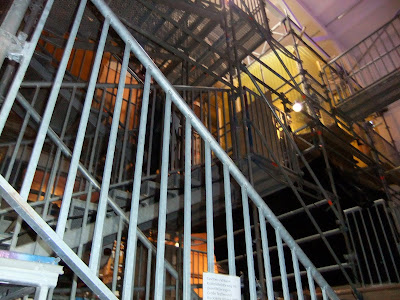 The exhibition with the funny name (it means one of those milking parlours where the cattle stand interlocked, head to head) consists of a four-story metal jungle-gym (thus the name), built up with staircases and rooms, in each of which rooms is featured an exhibit of some kind. I’m not sure if there is ‘meaning’ anywhere in there: I didn’t try to find any. Once we were let in (there was a vast queue, as the construction can hold only 40 people), I just clambered up and down and looked. Quite a few of the things seemed to be damaged, or have their video and/or audio components out of order, but I just took what I was seeing for what I was seeing, and …
When we emerged, nearly an hour later, and sat down with a quiet beer in the café, I said to myself: well? The answer to ‘well?’ was that, as a whole, the series of ‘rooms’ were just an ‘art gallery’, and the ‘art’ they contained? … twenty-four hours later, as I write this, exactly the same images remain, now as then, remarkably vividly, in my mind. A group of handbags on a wall, ‘magically’ tossing their own shadows – by some filmic process – round and round (and unphotographically) in circles 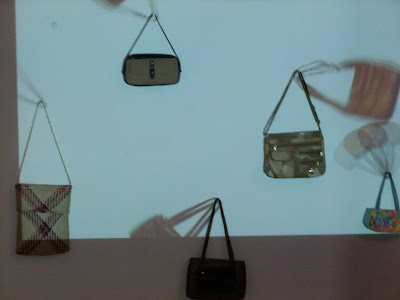 and a rough wooden room lined with rows of burned pizzas and entitled ‘Mutter Tod mit Pepperoni’ (Martin Kippenberger/Heimo Zobernig). I don’t know what Mrs Death had to do with things, but – in spite of the fact that the exhibit had suffered destructively from knees and shoulderbags -- the dilapidated rows of pizzas were strangely compelling! 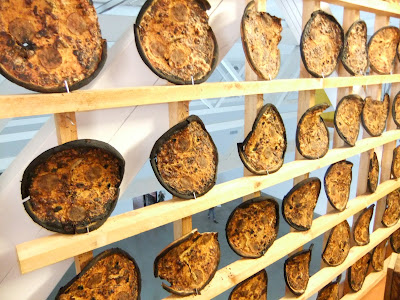 There was an cleverly unpleasant-feeling piece, Vinyl Terror and Horror, featuring distressed electronic equipment enclosed in a filthy caravan, and Anna was particularly taken by the ‘Backstage’ which I imagine represented the ‘artist’s’ or ‘caretaker’s room and which enclosed a vast variety of crazed and crumpled and ‘rejected’ bits and pieces, which may or may not have been still where the creator had put them. 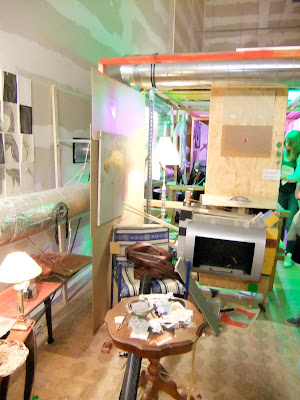 There was a good deal more, a great deal more, but those are the bits I remember.
And only once did I sneer the sneer that says ‘oh this is just tiresome’: in an item called ‘sexy socks’ (the title already is wearisome) where, sadly, drearily, the creators fell back on juvenile ‘naughty words’ for their ‘cleverness’. Yawn…

From the FischGrätenMelkStand we made our way the nearby Friedrichswerdesche Kirche. This C19th, neo-Gothic building was, of course, in considerable contrast to what we had just seen, but there was a surprise. It is now an art gallery, too, and its soaring space contains a selection of (copies of?) classical sculpture. But amongst those sculptures was a well-staged contemporary piece by Yinka Shonibara entitled Colonel Tarleton and Mrs Oswald shooting. I found it very effective and, yes, perfectly comprehensible ... indeed, I was altogether pleased, until I read the heavy-handed publicity blurb, with all its effortful politics and points. I don't want to be told what to see, thank you. If the artist can't make his point in his art...? 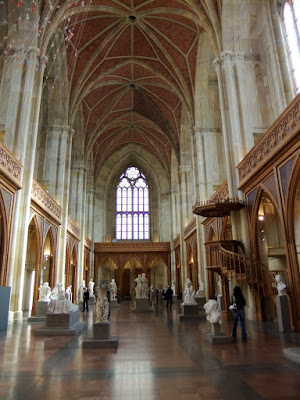 This morning, I have also read the hand-out material on the FischGrätenMelkStand. And now I don’t like it nearly so much. So much pompous stuff about ‘spatial situations’ and artworks ‘fusing with space’ and … it is all so pretentious and unreadable, quite the perfect poison with which to eradicate the enjoyment one can get simply by looking at the works in question. I am binning it, as of this moment, wiping it from my brain, and I shall just keep my agreeable images of handbags and pizzas, thank you.

My day ended, in suitably ‘cosmopolitan’ fashion with dinner with Kevin in a Brazilian restaurant down near the Schwules Museum, where his exhibition has been breaking all house records of affluence. And, to end a colourful day on a high, the buffet eat-as-much-as-you-can meal turned out to be stunning – from a first-class fish soup, to a truly wonderful beef (?), black sausage and black bean stew that had me longing for a larger appetite. The Café do Brasil, 72 Mehringdamm, is unchallengeably the best value-for-money feast I have eaten, anywhere, since I set out from New Zealand …

And then to bed, to dream of revolving handbags, burned pizzas, and delicious fish soup…
Posted by GEROLSTEIN at 4:17 AM

I was educated out of your naive position on art by a colleague at the Open University about 30 years sago, who explained, at much greater length, and I translate loosely, that there is no such THING as art, only talking about art. I think that means you are actually producing the exhibition you visited by blogging about it - whatever you say. Phew, back to watching Cabourg...

Ooooh heck. That's a bit subtle for me ...
I'm not a philosopher, as you know, just a 'reporter'...
I look, I see, I think (more or less) and then I write .. which is perhaps why I didn't like it when I was made to look, think, and then read before I wrote..

I'm trying to think seriously about what you have said, but I think an exhibition which has been written about so very very much (see www) 'exists' already. My wee piece is just my reaction to seeing it in person ... I think

Back to watching Geelong :-)

I was being largely ironic of course but I retain some of the idea that a pile of bricks is not a pile of bricks but whatever people interpret and write and say about 'it' as, including many who say it is 'just' a pile of bricks. So art becomes the interpretation of objects, paintings, happenings.. the discourse... not those 'things ' 'in themselves' which they can't be - although each of us holds dearly on to our own interpretaton as the true and valid one. As in whether that horse was trotting 'properly' or not!