Berlin on a roller-coaster

.
Yes, that means what it sounds like. My budding love affair with this city has not run altogether smoothly.
What went wrong? There was I on a huge high after my Best Concert Night Out probably ever … and the next thing …
Friday. Arrangements awry and suddenly … unreasoning panic. Alone in a big city, where I can’t speak the language, and where this machine is my only contact with an outside world which seems to have vanished… Where is everyone? Anyone? Living their own lives, of course. Off on holidays, away or out on business, other folk to see, but not around ... Probably someone was on the end of a sanity-saving txt, but I don’t have a phone.
The sky clouded over, and the rains came down, and as I sat imprisoned through Saturday and half of Sunday, in my normally beloved no32, listening to the man next-door doing loud repairs, the man downstairs doing ditto ... with no escape to .. where? .. through the storm … uselessly spiralling into a real and wholly untypical tempest of lonesome blues … I could only think: I want to be back at Gerolstein. Have I stayed away too long?
And the realisation punched itself into my brain: how could I ever, ever have imagined that I could make a home base in a city where I don’t speak the language? Where I can’t even go out to a bar or a resto, if I should want to, and chat to some jolly company, on a horrid weekend like this one, because I’m half-deaf and foreign and, anyway, too many places here don’t take credit cards? The Berlin real-estate books, which had, in my imagination, been invitingly half-open since I got back here, closed that weekend with a definitive bang. What was I thinking of? End of dream. End of wonderful but foolish dream. 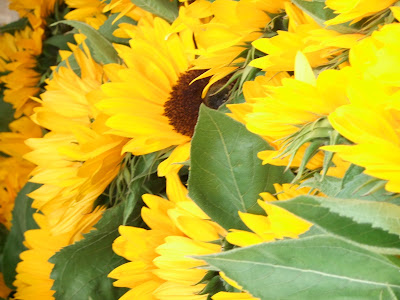 The mean blue moment passed, of course. Dear PGB arrived back in truly timely fashion from his hiking in Croatia, and we dined out in the Winterfeldstrasse on Sunday, picknicked on floods of bubbly and smoked salmon and a whirl of gossip on Monday, and on Tuesday I went out on the town, for a delicious night out with the boys … Life was back on wheels again, but that wicked wet weekend had left its traces. I was going to have to work at it, to once again feel as wholly comfortable here as I did a fortnight ago. Needless to say, I am winning the war. But I’d rather have not needed to.

My night out with the boys – Thomas H, Thomas Z, Christian and Ollie -- was a treat. We started off at the Soho Club – an up-to-date version of the old English ‘Gentlemen’s Club’ (though they have ladies as well, now) implanted semi-congruously into the heart of Berlin. On the superb ‘roof-terrace’, a delightful rounded bar, a swimming pool, and a view out over the Berlin rooftops, which the rain rendered rather surreal … 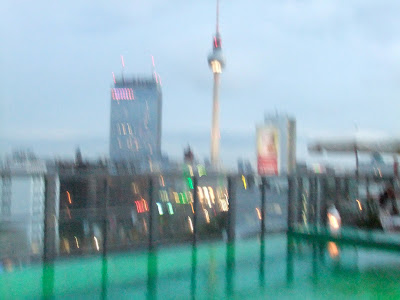 From the Soho Club to the Chamaleon, a proper European-style cabaret room – central platform surrounded by tables -- where the entertainment was an act named ‘Versus’ – eight young acrobat-dancers in a very strenuous, skilled, agreeable and sometimes even imaginative modern version of the circus routines we’ve known since circus was invented. My mind flew back to Barnum days. Where were young folk like this when I was casting in the ‘eighties?
From the show, on to a real Berlin gay bar, by the name of ‘Betty F’ (in homage to Mrs Ford) .. and hey! not only could I hear in the small room with its moderate music, but I found I was thoroughly enjoying myself amid our delightful company. Still, elderly gentleman have to take care, and I tip-taxied away at midnight, leaving the lads to their foreseeable long, long night..
Thursday, out to Kreuzberg with Ollie to ... wait for it ... a Jamaican restaurant. Well, why not? Delicious spicy food, a touch of genuine Jamaica rum to finish … thank you Kirk and Troy of the Rosa Caleta, Muskauer Strasse, a grand evening … with a surprising result. Next day, Ollie turned up at no32 bearing the prophylactic for the previous weekend’s blues … a mobile phone! After all these years of saying ‘I can’t’, I have already learned to text! Slowly. Maybe next week I may see if I can hear a call: but I find it quite hard, already, to hear the thing tinkle ... so we shall have to see. 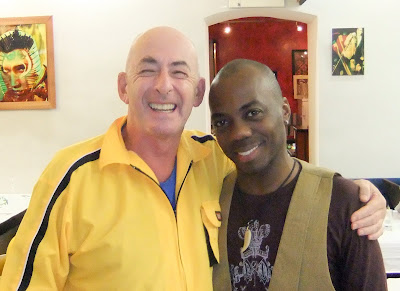 Saturday, a lovely family evening with the Leclair-Clarkes – dining on a real ‘Ulster Fry’ (the children are just back from holiday in Ireland, and brought the stock of the local butcher’s shop with them) and -- this you are never going to believe – watching not only the holiday snaps of beautiful Ireland but … a movie! Kevin and Maxime biked to the store to get the ‘for hearing-impaired English-speakers’ version of Hangover, and I got used to ‘listening’ to it quite quickly. The film was American-silly-funny (and laced with plot incoherencies) but I can see it will be much liked by filmgoers.

Sunday night, a picknick with Kevin – music and bubbly and a whole fortnight’s worth of catch up -- and today, out to the new Nationalgalerie for a very fine and admirable exhibition entitled Modernen Zeit. 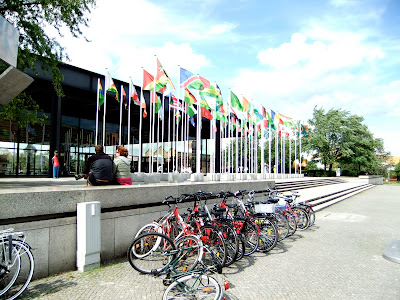 The times it dealt with were, happily, not so modern as that: it was an exhibition of art from the first 40 years of the 20th century, a period which this country seems now to have idealised as ‘the good old days’. I don’t know a heap about German 20th century painting – one knows the name of Grosz for not entirely pictorial reasons, Kirschner and Dix ring a bell, but the French artists of the same years, when they were busy inventing cubism and the like and lunching out at St Paul de Vence, are obviously much more familiar to me. So I was rather delighted to see a great deal of strong and often colourful painting in all sorts of styles, which seemed to show that the German painters of the time had perhaps more individualism than their French counterparts. I particularly liked one room of elbow-to-elbow portraits, all from the same years but yet all so contrasting in style … alas, I couldn’t stop my camera flashing, so one photo was all I got … this is only a tiny sample of the collection … but the bug-eyed family in the middle is the star exhibit… 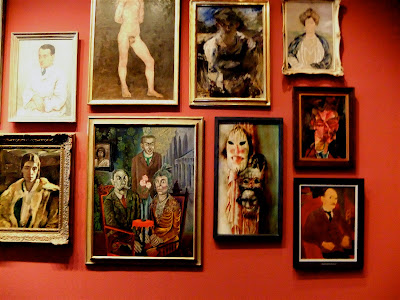 Alongside the exhibition, a multi-part silent film of Berlin in the 1920s was playing. I watched about 20 minutes of it, and could only think .. 1920? those men could be my grandfather, and oh! how different the world was…

Tonight, back to the Tipi .. the tent-theatre .. to see (is this an anomaly?) a German-language version of the musical Cabaret …
Oh yes, my Berlin is well and truly back on wheels and, as September looms, my dance card is filling rapidly with opera, with theatre premieres, with coffee dates, lunches and events, the colourful memories of which I shall be able to live on for many a quiet country month ..

I shall enjoy Berlin in the summer, I just sha’n’t get involved.
And next time I come here, I shall, I think, avoid August. I don’t ever want to live another weekend like that one I just lived…
Posted by GEROLSTEIN at 12:46 AM

Oh, Kurt, poor you! What a truly awful weekend and I'm just glad that you're getting back into the swing of things now - keep smiling and remember that you'll soon be back home!