Yesterday I came upon a large stash of photos and postcards relating to the northern concert parties and entertainment troupes of the early years of the twentieth century. Those years when you either made your own entertainment, or went out to venues of all kinds -- church halls, Mechanics' Institutes, ends of piers, music rooms or halls -- to hear the unpretentious performance of others ... especially on holidays and at the seaside. You paid your 6d or 1/- and got entertained by the Merry Muddlers, the So and Sos, the Ps and Qs, The Jovial Jesters, the Musical Dons, groups of varying degrees of professionalism ... 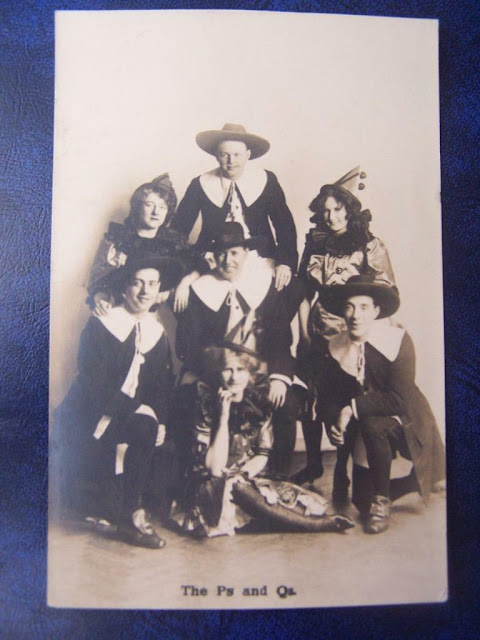 Well, the ebay shop of shireantiques.pickering (30,000 items, pardi!) has laid hands on a splendid heap of cards from groups of this kind ... and among them that enduring group known as Laurie's Juveniles, about whom I have already written  https://kurtofgerolstein.blogspot.com/2018/09/when-fat-lady-sings-and-brings-out-star.html

Out of that pile of photocards -- of very differing degrees of professionalism! -- the one that caught my attention was this 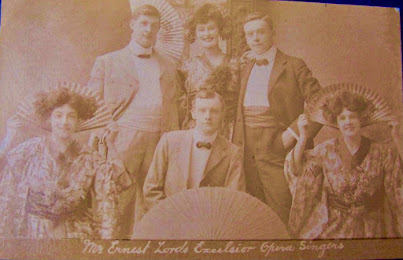 Opera singers? Anyone I might know of? Little peep ... goodness, here's another photo of the same team. Or is it all the same folk ...? 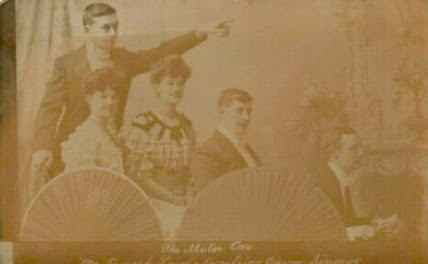 The brollies are the same. But ... anyway, its a postcard, and its been used. Posted from Plymouth in May 1908, to Mrs Dearlove of Walthamstow.

And here's a third 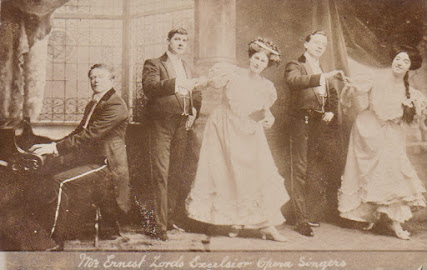 Well, we know that is Mr Lord at the piano. But the others? Time to dig a little. Starting with himself. 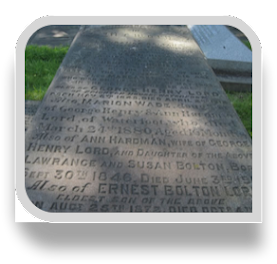 Father was a grocer and draper (he later added 'fruit manufacturer' and 'butcher' to his accomplishments), and the family -- father, mother, and 8 year-old Ernest, can be seen living in Glen Bottom, Waterfoot in 1881. In 1891, he is 'music student'. My first sighting of him as an active musician is in 1894 when he is leading a string band at the Wesleyan Chapel, Brooklands Rd (Primitive Methodist). In 1895 he is singing at the Clitheroe Bicycle Club and accompanying ar the Ebenezer Philanthropic Union. In 1899 he is singing at the Moorlane Chapel, Clitheroe, and at the Wesleyan School, Sabden. He seems to be leading an uneventful musical life, describing himself as 'organist and music teacher'.

But in 1900 life got a bit more lively. And it was the Primitive Methodists who were at the root of it. On 24 March 1900 the PMs of the Redearth Rd Chapel, Darwen held a teparty and concert at the Sunday School in aid the the debt reduction fund of the institution. It looks as though Ernest got the job of providing the concert. And thus was born the Rossendale Excelsior Concert Company. Lily Trickett, May Jobling, Emilie Law, Beatrice Isherwood, Jack Heyworth, James Whittaker Boys, Tom Heyworth and Mr Lord. Miss Trickett was an Accrington girl, Boys was a Rawtenstall cotton weaver, the Heyworths seem to hail from Bacup but I see a J T Heyworth in PM concert in Blackburn in 1898. Anyway, all were amateurs, some very ephemeral: Boys and the Heyworths performed for several years with Lord, Lily went off and married a curate from Clitheroe, Emily Law turns up a couple of times, Miss Isherwood (contralto) of Oswalsdtwistle and the Blackburn Contest Prize Choir soon becomes discreet. As for Miss Jobling, she seems to have been a sister of 'Elsie Cross' of Daly's Theatre. Unless there's another May. Anyway she vanishes from Rossendale.  Alas, no-one tells us what they sang, but the experiment seemingly was successful, for come November they got another date, at Burnley's Co-operative Assembly Room. Lily and Beatrice were still on the team, as were Mr Boys and the comical Hayworth, but a newcomer, Mr George Harker Holt (tenor) had arrived.

George Harker HOLT (b Bacup 18 May 1879) would become a mainstay of what was now named the Excelsior Opera Concert Party for more than a dozen years. Born in Bacup, father a quarryman, mother a cotton weaver and church cleaner, he began life as a cotton doffer. and a clicker in a slipper works before taking up music. Between 1900 and 1914 he sang tenor with the company, so there is no doubt that he is one of the men in our photos. Yes. Left back in no1, middle in no2, and next to Mr Lord in three. Quie obviously a tenor. He doesn't seem to have worked after 1914. He married a Marian Ormerod, had a som, James Ormerod Holt (b Burnley 1 April 1916), and ended up in Blackpool. Wife and son are with her mother in Repton. Hmm. It looks as if he may have died in 1958, aged 81.

I pick up the Excelsior team in little dates over the years that follow, 'Ona' Ashton from Manchester (1901-2) and Jeannie Sharpe (1902-4) succeeded Lily (Mrs Alfred Swallow) in the soprano spot, another tenor, cotton weaver Ernest Edmondson (b Burnley 28 November 1877; d Burnley 24 May 1934) took regular turns, between 1901-4, names such as Evelyn Geldard and Nellie Pickup appeared only to disappear, but 1901 marked the arrival of the most solid group member of all. Alice Singleton (contralto) would spend sixteen years with Mr Lord, up till the time in 1917 when the company finally folded: and I still see her performing in variety houses into the 1920s. She, also, must surely be in the team photos. Maybe the one with the hair in no3? But wait .... 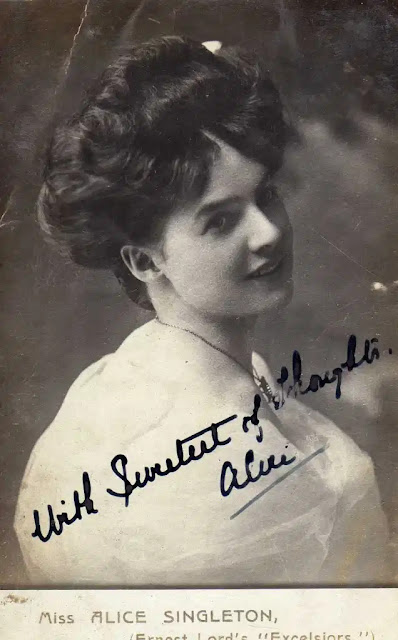 Alice SINGLETON floruit 1901-1920. I don't know where she came from. But I just may know where she ended up. Mr Holt's replacement as tenor, in 1915, was a young man named Philip Becker. After the end of the Excelsiors, Mr Becker and Miss Singleton appeared together elsewhere. In the 1939 census, Philip is still a vocalist. And he has a wife. Thirteen years older. 'Retired actress'. She is named Alice. What do you think? I think very possible. But can I find the marriage in the records ...?

The numerical composition of the group, as well as its name, seems to have undergone changes. In 1901, we are 'ten in number' in 1913 were are seven. At other times it is Ernest and a quartet .. but the backbone remains the same, Ernest, Alice, George ... whether they are advertised as Opera Singers, or as at Cheltenham's Montpellier Gardens as Light Opera Singers (Maritana, Faust, G&S) ar, as the motor car number above seems to indicate, plain old Variety ... 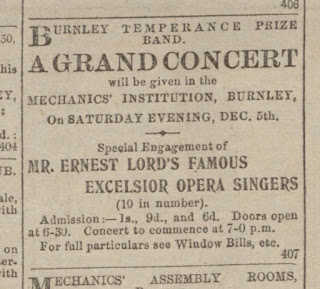 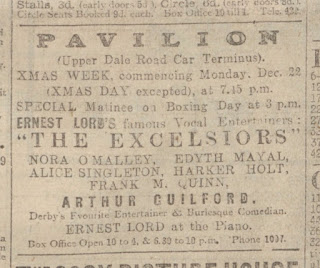 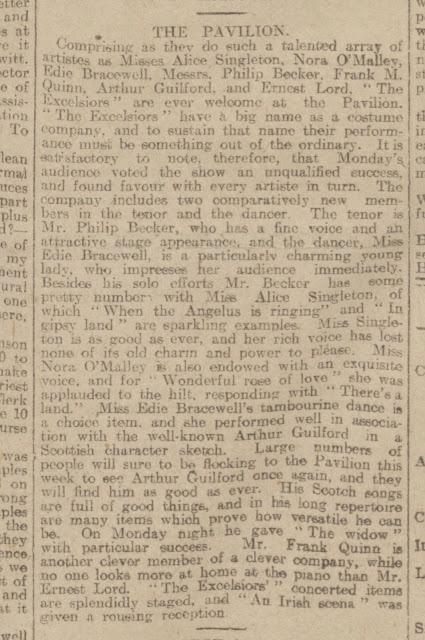 Yes, there are more Excelsiors to come. The group went a bit quiet 1905-6, and when it returned it had doffed any pretensions at grand opera, and was an Entertainment like so many others. Ballads and comedy.
Arthur Guilford was seemingly a Derby comedian. He got billing in his home town between 1912-1916.  Nora Marginson O'Malley (b Burnley 5 July 1889; d Hereford 1971) was the pick of the latter day sopranos. She married a Michael Quinn in 1912. I don't suppose he was Frank M Quinn ... but I'll end this review of forces with a few lines on Mr Becker.
Philip John BECKER (b Malvern 15 December 1890) was brought up in Ilfracombe, Devon, one of the children of a German bandmaster.  He performed as a child, but went to work as a grocer's assistant, before quitting Devon for London and groceries for a spot as a Gaiety Theatre chorister. He joined the Excelsiors in 1915 and thereafter continued a career in vaudeville and radio for more than a quarter of a century. My last sighting of him is in 1942.
Well, 17 years isn't a bad run. The 'Excelsiors' seem to have entertained a lot of folk during their existence. I wonder if they all made a living those latter days when they weren't just cotton workers having a good sing at church functions ...
Posted by GEROLSTEIN at 3:04 AM