A Guide to Bradshaw or, The Lost Comedian

I've been acquainted with 'Mr G S Bradshaw' for nigh on thirty years. He played for some years with Emily Soldene's companies. But, although I noted details of his career in an ancient file, I didn't ever investigate him further. Then, last year, when I was scrutinising the members of Mr D'Oyly Carte's companies for the G&S Who's Who, he turned up again. And, again, I didn't deeply investigate him. 'Bradshaw' was clearly a pseudonym. He was popped into the Geraldine St Maur-Millie Vere box, classed as 99 percent unfindable. But ... yesterday, quite unexpectedly, he rattled his chains and jumped out of that box ...

And I can tell you that GSB was born, wait for it, George Smith. Somewhere in Marylebone. Maybe Thayer Street. Date 26 October 1844. His parents were Thomas Smith, upholsterer, and his wife Margaret, née Jordan, formerly a servant, it seems, in the Crooked Billet public house in Aldgate.

As you can see, George was named for his grandfather, who seems that he might have been the Geo Smith upholsterer of 69 Dean Street, Soho. But then something odd happens. Thomas and Margaret had three more sons and a daughter. And they were christened (all in a bunch in 1856) Milton (b 27 February 1847), Byron (b 5 September 1850), Hahnemann Gall (b 4 July 1852) and Concordia Mercy (b 30 September 1855). So, we have an hereditary upholsterer who is into poetry, homeopathy and prayer?
The other odd thing is that, after the birth of Mercy (as she was known) and the bulk christening, I lose Thomas. In 1861 Margaret -- 'married' not widow, and a needlewoman -- is at 22 Denmark Street with the children; in 1871 at 11 Rathbone Place 'married' and -- what? retired actress! -- but no sign of Tom. In 1881 she finally admits to 'widow' and 'annuitant'? How? And she, Hahnemann, his wife and children, all back in Gerrard St, Soho, are now calling themselves 'Bradshaw'. As is Byron. Only Milton remains 'Smith'. Curious.
But back to George. In 1861, he is a compositor. But by 1871 he has put a toe into showbusiness. He hasn't given up his day job, though, he lists himself as vocalist, actor and printer.
His first job seems to have been, in early 1869, as a singer, touring with 'Professor' John Henry Pepper CR, FCS of Pepper's Ghost celebrity and his programme of scientific and chemical illusions. Pepper made up his programmes with all sorts of entertainments (George Grossmith took a turn), and he had produced a version of Der Freischütz. George sang the well-known music, as accompaniment to the visuals, and acted in an accompanying farce. I see him also singing in variety at Macclesfield. Apparently, he was for a while with a group of minstrels, Charles Christy's Minstrels, who toured minor provincial venues. I notice an ad, briefly, in the trade press, for "Leslie and Shaw .. the Two Crows" coming from his address. Well, the Smith-Bradshaws weren't the only folk living at 11 Rathbone Street. It was divided into three. But I think George was the only striving blackface singer.

The crows seem not to have flown.
In 1871, he found himself a different employ: as low comedian with one of the small opera companies touring the provinces. This one was run by Henry Haigh, and I see he played in The Waterman

It was followed by a company run by Isidore de Solla, and its star was Mrs de Solla, the former 'Arabella Smythe' ... 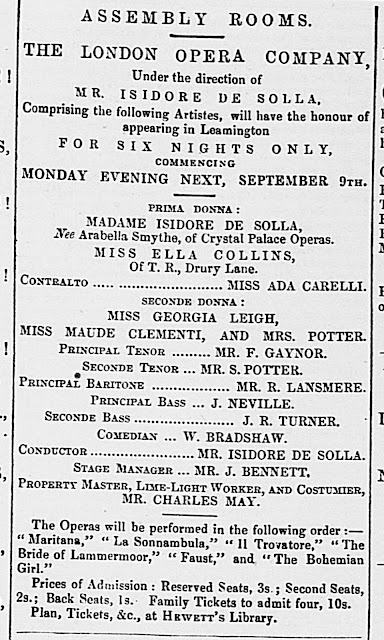 I see he played the Marquis in Maritana .. probably Alessio and maybe Florestein ... anyway, Macclesfield found that 'Mr Bradshaw's propensities for singing and acting peculiarly fit his for the stage. He possesses a good clear voice'. He toured for something like a year with de Solla, then after a brief appearance at the East London Theatre in La Fille de Madame Angot, he joined another like troupe yclept the National Opera Company with whom he played Florestein, Robin in The Waterman, the Burgomaster and Pitou in Geneviève de Brabat, Spyk in The Loan of a Lover, Turbey in The Goose with the Golden Eggs, the Sherrif in Martha as well as in the accompanying farces. And Pomponnet, this time, in La Fille de Madame Angot. Pomponnet would be his bread-and-butter in the coming years. All the way from Kilkenny to Drury Lane. In 1875, he advertised for the role, stating that he had 'two splendid Pomponnet dresses'. 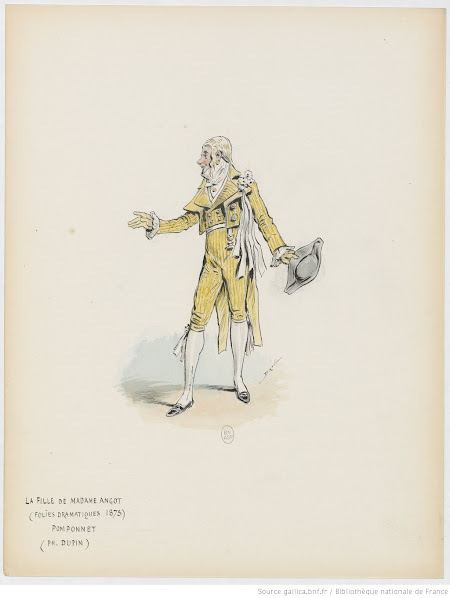 At various times he had brief engagements in the Queen's and Theatre Royal, Dublin (Alphonse in The Rose of Auvergne, Florestein, Pomponnet, Alessio, Marquis, Patoche in Calino), Bath, Worcester and apparently with Virginia Blackwood, with the minuscule Dixon and Haines opera, but his next substantial job, in 1878, was another round of Pomponnet on an Edward Rosenthal tour with 'Annie Beauclerc' as his Clairette. 1879 saw a nice change. Mr D'Oyly Carte, sometime agent of Mr Bradshaw, was putting out a second tour of his hit musical HMS Pinafore. And for the George Grossmith role of Sir Joseph Porter KCB he hired: Mr Bradshaw! 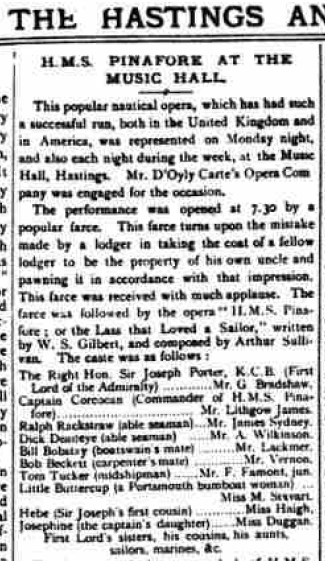 He also played in  In the Sulks and After All, the curtain-raisers.
And on Easter Monday 1880, he opened at Drury Lane, giving his Pomponnet alongside Cornélie d'Anka, Alice Burville and Wilford Morgan.
I next spot him at the Philharmonic in April-May 1881, playing Pompéry in A Cruise to China, Mr Corrigan in The Colleen Bawn, Widow Melnotte in a burlesque Lady of Lyons, in East Lynne, The Dancing Barber et al, then at the Alexandra Palace where he gave his Pomponnet as a pendant to the horse show (24 June) and the goat, mule and donkey show (15 July), before joining up with the top opéra-comique company in Britain: Emily Soldene's. I see him giving his Pomponnet with Soldene at the Crystal Palace and at the Standard Theatre, but he seems to have temporarily dropped out, for a Christmas engagement at ... Covent Garden. He played Granny Grin in the pantomime Little Bo-Peep and Obadiah in The Miraculous Cure until 11 February and then rejoined the Soldenes, as Pomponnet, Pitou and Lotteringhi/Lambertuccio in Boccaccio.
Next, he joined Frederic Wood (October 1882) for a small-scale tour of The Beautiful Galatea, The Waterman, The Rose of Auvergne and Prizes and Blanks, and took a turn with Joseph Tabrar at the poor Imperial Theatre, but he returned to Soldene for a three-weeks season at Hastings in which she pulled out her old triumphs in a vain attempt to save her sinking management. He stayed on at Hastings a while thereafter, but the end was nigh.
I see George at Bury St Edmunds, playing Trénitz, not Pomponnet in a tiny production of Angot for the Hon Veronica Knollys .. and with the Mohawk Minstrels ('buffo vocalist') ... and touring as Brother Pelican in Falka (1885)
So where, then, did he go? What happened? I simply don't know. And did he do it as Smith or Bradshaw. To be solved.  Anyhow, I chased up the brothers and sister to see if a clue was to be found ... sister was the most interesting.
Mercy not only played piano, she also sang. As early as 1870 she can be seen playing at concertina-player Charles Roylance's concert ('Miss Smith Bradshaw') at Cambridge Hall, Newman Street. She advertised herself in 1876, as a pianist, as 'of the Opera Comique'.

However, from the profound depths of my memory I pulled a comic-opera chorister named Miss Mercy. Could it be? 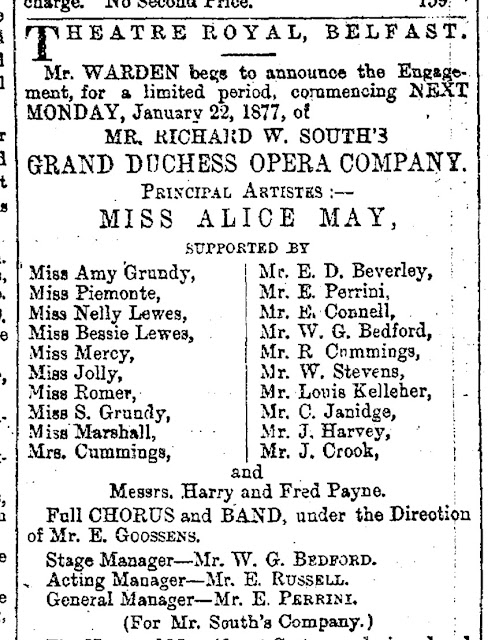 Well, it was. From the South company (1876-7), Mercy went to the Carte company. and while in Dublin (23 March 1878) she married the baritone, Michael Dwyer. The couple can be seen in 1881 touring with the Walsham Company. She had two sons and a daughter, retired from performing, and died 22 October 1922. George wasn't with them in 1881. They were on tour in Burnley.
Milton, who staunchly remained Smith stuck to the printer and stationery trade. He married Mary Ann Forbes, and had one son who died aged 28.  He died in Hampstead 8 December 1903. I can't find him in 1881.
Byron became Bradshaw and an heraldic and decorative designer and draughtsman. He married Margaret Sarah Starie in 1882 as Bradshaw and, for the occasion, confirmed his father's name as Thomas ... Bradshaw (deceased). He died in Camberwell 7 September 1920. In 1881 he's living in Gerrard St, alone. No George.
Hahnemann is, in 1881, a stone seal-engraver, with a wife, Caroline Sarah née Hatfield, two children, and a sister-in-law. And mother Margaret. No George. They are all now Bradshaw. He died 18 February 1897.
So, no George by any other name.  And no Margaret after 1881. And no Thomas. I particularly want to find Thomas. Because ... well, Mercy got a piano-playing job at the Opera Comique circa 1875-6. How?  Well, funnily enough, round about that time there's a Mr T Bradshaw playing in the chorus of Princess Toto. And that Mr Bradshaw was in the original chorus of Trial by Jury ... could it be? I doubt it. Thomas would have been in his seventies.
Well, that's enough brain-beating for one day. Over to the G&S experts now!
George Smith Bradshaw, weaver and upholsterer, of Soho ... mid eighteenth century.. .  'the last of the Soho tapestry makers' .. oh died 1795.  Son John Bradshaw Smith!  Ohhhhhh ... second son, George ... well, I think here's the connection. Whether said second son is grandad, or whether our Smiths just borrowed a celebrated name ... ?  I have a gut feeling is (a). The Soho upholstery, you know ..
Geore Smith Bradshaw of Dean Street died at Pershore in his 93rd year ... April 1812 ... Miss Smith daughter of George Smith Bradshaw died Pershore 1806 ..  yes, the Smiths and Bradshaws are already interchangeable ..  Ooh look George Smith Bradshaw upholsterer of Dean Street being robbed in 1759 by a woman with a pick-lock ... and in the proceedings he's referred to as ... George Smith! And she got off! Ah, and here's his will!  Eight pages. Son John Smith, annulation of four thousand debts! His wife Mary and daughter Charlotte .. son-in-law Lt Richard Thomas, husband of Margaret ... daughter Jane Smith ..  my son George Smith ... thousands of pounds everywhere!  Heavens, has he been lending to the Earl of Sandwich? Henry Glover of Dean Street, Soho ... 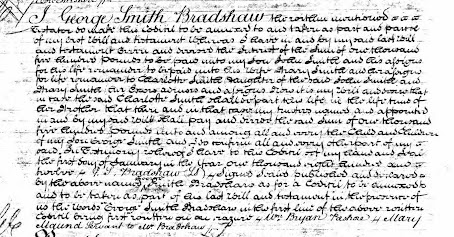 And his younger son is plain George Smith. I'm satisfied that this hugely wealthy man is great-grandfather to the lost low comedian ...  grandfather to the missing Thomas ...  what a turn up for the books.
George Smith Bradshaw born Soho 28 December 1767, son of George Smith Bradshaw and Margaret, Dean Street ..  yes, see the Dictionary of English Furniture Makers 1660-1840. Huge entry. It looks as though the Bradshaw was assumed by Mr Smith after inheriting from William Bradshaw ... so now we know.