"The Minute Gun at Sea"

During my years wandering in the Victorian age and making to acquaintance of its music-makers, I've come upon a number of songs which obviously come from pre-Victorian years, but which remained popular, and sung all round the country, right through the great queen's reign. One of these was the intriguingly-titled "The Minute Gun at Sea'. I had a picture in my mind of a teensy-weensy rifle floating through the waves .. Well, of course, it wasn't my-newt, it was minnit, and the minute gun was a gun fired off at one-minute intervals to guide ships in distress. Odd subject, I thought, for a soprano/tenor duet. They usually sang about roses and moonlight and fairies. So ...

Well, just my luck! It's a show tune. From an 1809 musical ('comic opera') entitled Up All Night, or the Smuggler's Cave, mounted at the newly-licensed English Opera House, Lyceum, as its opening piece. Text by the manager, Samuel Arnold, music by Matthew P King. 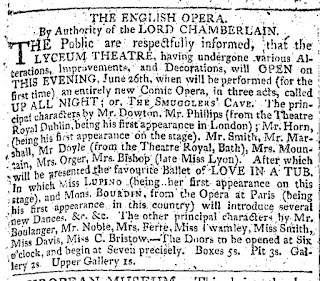 The story was the usual old stuff. Get the heroine in and out of male disguise, give the chief comic plenty of clownish moments, let the young lover sing tenoriously ... but it was enlivened by a group of smugglers ... well, here's how the contemporary press tells it: 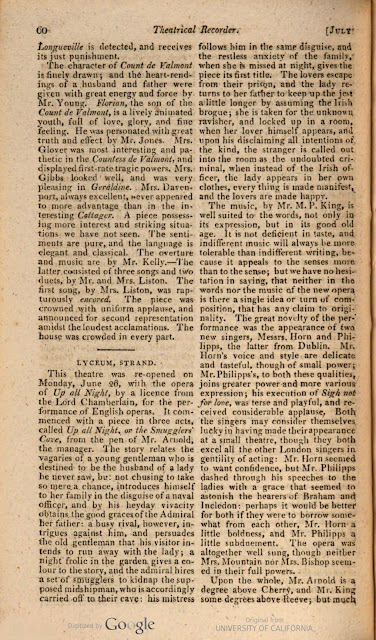 The score, as befits a soi-disant comic opera was quite substantial.  The book of words (price 1/-) gives us the following breakdown:
1.1 Chorus of Smugglers
1.2 Comic song (Admiral) 'When first time began'
1.3 Air (Meddle) 'He who feels a lover's anguish'
1.4 Duet (Admiral/Meddle) 'When a Man a Fair Maid would Obtain'
1.5 Air (Flora) 'In vain I strive with aspect gay'
1.6 Duet (Flora/Mr Heartwell) 'Nature no proud distinction knows'
1.7 Ballad (Young Heartwell) 'Tom Steady'
1.8 Trio (Young Heartwell, Harry Blunt, Peter) 'In every heart where feeling dwells'
1.9 Air (Juliana) 'Oh! Roses are sweet (on the beds where they grow)'
1.10 Duet (Admiral/Juliana) 'When first a man marries a wife'
1.11 Airs and septet 'Oh! ask the inexperienced heart'
1.12 Glee (Juliana, Flora, Young Heartwell, Harry Blunt) 'Cold the link'
I've managed to find music for two of the first-act pieces: no7, sung by Philipps and no 9 sung by Mrs Mountain 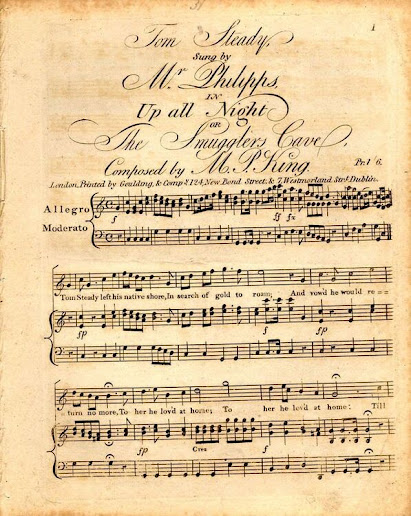 And no 3, sung by the novice Charles Horn, who tells the story of his nervous first first night amusingly in his memoirs, is there but I can't get my hands on it.
As for no 4, well I haven't heard the melody, but the lyric is amazingly close to W S Gilbert's Yeomen of the Guard song 'A man who would woo a fair maid'.
Act the second
2.1 Duet (Juliana, Flora) 'As when the moon in silent night'
2.2 Ditty (Juliana) 'A maiden once who lov'd in vain'
2.3 Song (Peter) 'On board the Termagant we sailed'
2.4 Duet (Peter/Madge) 'A damsel once so truly lov'd'
2.5 Rondo (Young Heartwell) 'Sigh not for love'
2.6 Glee (Juliana, Flora, Young Heartwell, Harry Blunt) 'Tis at fair beauty's shrine'
2.7 Song (Harry Blunt) 'The Parent Oak'
2.8 Song (Admiral) 'Some poets sing of nought but wine'
2.9 Air (Meddle) 'The Soldier's Bride'
2.10 Finale 'Hark! tis the Nightingale' 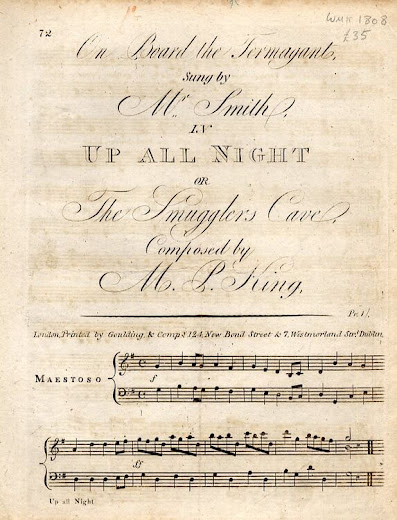 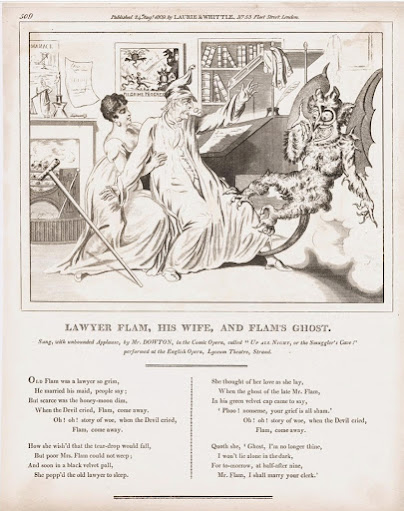 3.4 Duet (Juliana, Young Heartwell) 'The minute gun at sea'
3.5 Ballad (Flora) 'Dear home'
3.6 Air (Meddle) 'I love to rise at early morn'
3.7 Finale
Well, the songs -- both the lovey ones and the nautical ones -- are eminently extractable. And extracted they were, and published as singles. But what impresses me is that, whereas often a third act merely, in the old days, dribbled musically away into reprises and a finale, Arnold and King's third part contains not only the hit of the show, but also two other popular numbers.
And here it, the song or rather duet in question 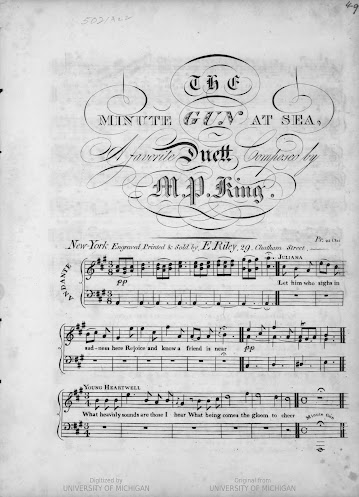 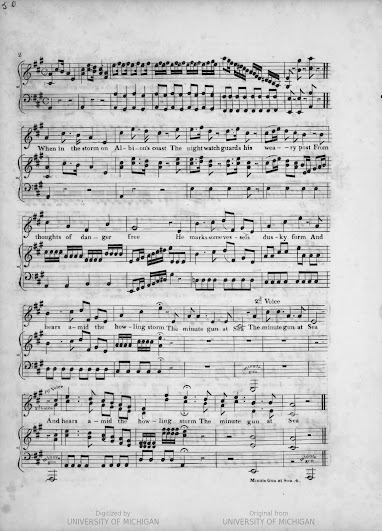 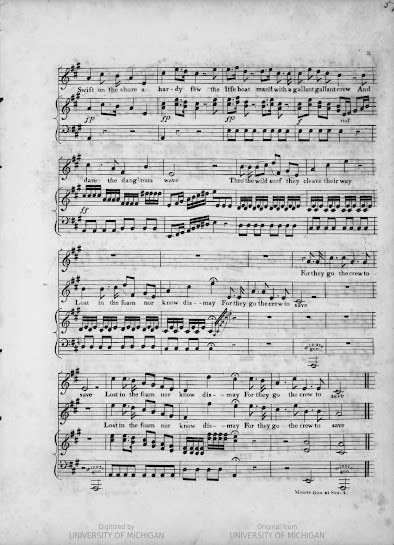 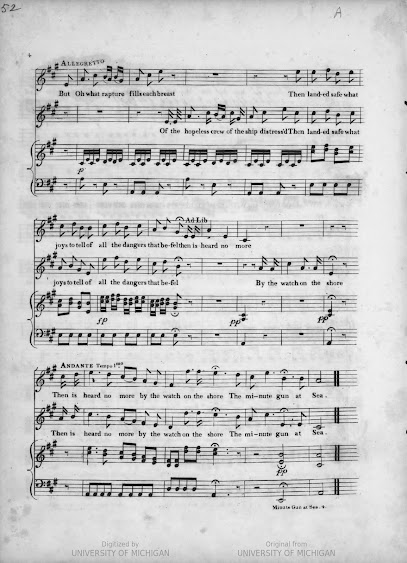 I can't sight-read music, but it seems to me to be just another of those melodramatic numbers about shipwrecks -- 'Asleep in the Deep', 'Launch the Lifeboat' -- but it clearly had something that clicked, for it was to become a concert classic for more than a century, sung in theatres, music-halls, concerts -- it even made the Boosey Ballad Concerts more than once (Ann Banks/Henrik Nordblom) -- at penny readings, charity concerts, usually sung by sop/tenor, but sometime by two tenors. One one occasion the 'female tenor' Florence Wreghitt took the top line at the Foresters' Music Hall. The Eistedfodd at Llanwit Vardre used it as its test piece for duet singers. And eventually it was got hold of by performers such as the Sisters Claribell, who came on in dinky sailorboy cossies ...
There were nautical plays produced, using the phrase as title or subtitle -- The Press Gang, or the minute gun at sea -- or the drama by C Zachary Barnett ...
The actual piece had a good run, too. It was played at the Lyceum for three consecutive seasons, with Dowton, Philipps and Mrs Mountain in their original roles ... which I have neglected to list: Admiral Blunt (William Dowton), Harry Blunt (Mr Doyle, from Bath/W Miller/James Smith), Heartwell (T Marshall), Young Heartwell (Tom Philipps), Meddle (Charles E Horn), Peter (George Smith), Juliana (Mrs Mountain), Flora (Mrs Bishop), Madge (Mrs Orger), solo smugglers (C Fisher, W Miller/James Smith/Mr Lee, William S Chatterley) with Messrs Caulfield, Cooke, Danby, Wilson, Meade, Jones, Dibble, Whinshurst, Mathews, Saunders, Tarrier, Heath, Gusset, Second &c.  No ladies chorus? It ran, in its original season, from 26 June till 22 July when another opera The Russian Impostor or the Siege of Smolensko was produced with fair success.
Up all Night was revived in 1819 ... by which time, it seems, a number of extraneous songs had been ladled into the proceedings 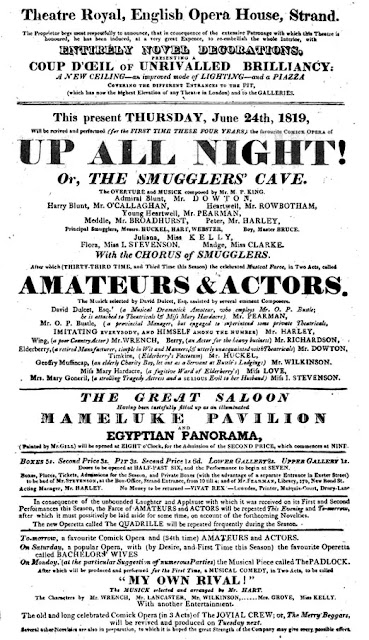 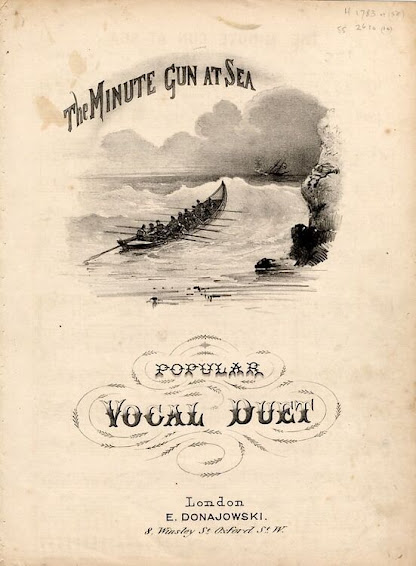 However, it was the song that lasted for a century and more, while the comic opera which had birthed it gave way to a multitude of others ... 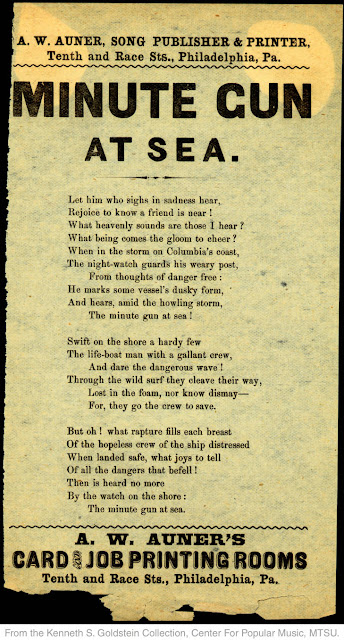 I mustn't get in too deep here, and there is no reason to dilate on folk like the celebrated Dowton and Rosemond Mountain, or on Charles E Horn who wrote his own story. Nor Tom Philipps (b 1777), who died on a railway track 27 October 1841 .,.

I see that poor William Chatterl[e]y died aged 33. Mr Doyle, I imagine, is Mr Doyle the Bath oratorio, concert and glee-singer, and the Mr Doyle playing at Liverpool in Lock and Key in 1822; George Smith was apparently a bass church singer and Thomas Marshall seems to have ended up in America ..
Mrs Bishop, the wife of Sir Henry (Sarah Elizabeth Lyon b London 4 July 1787; d London 10 June 1831) left the theatre in about 1820, and suffered ill health before a premature death.
Enough. One can dig deeper and forever. I found what I wanted to find. And now I know what a 'minute gun' is. Not a pistolette.
Posted by GEROLSTEIN at 12:06 AM