Harry and Charles: "The comic shadows"

Twenty or thirty years ago, when I was researching my book Emily Soldene: in search of a singer, 1500 pages and hundreds of illustrations of the Victorian theatre and its population, I tried very hard, in all corners of the pre-Internet world, to gather up portraits of the people featured in Emily's story. Right down to the chorus girls of three continents. And, with a little help from my friends, I did amazingly well. Things turned up in the most amazing places. Rootling around in the National Library of New Zealand, I even dug up a photo of 'The Raynor Brothers', blackface comedians! Why did I want them? Because when the famous Payne family, who had made such a hit in the eccentric can-can finale of La Grande-Duchesse, moved on from the John Russell tour (star Emily Soldene), Russell replaced them with the Raynors.
"the place of the irreplaceable Paynes was imaginatively taken by the Raynor Brothers, Charles and Harry. The Raynors (who, of course, were not brothers at all) were ‘Ethiopian comedians’, blackface music-hall entertainers who would later bill themselves with considerable success as ‘the comic shadows’. Harry had traipsed the world as an entertainer -- California and Nevada, Australia, the East & West Indies, Tahiti, India, China, South Africa -- and had, the previous year, appeared on Broadway at the San Francisco Minstrels’ Hall and Tony Pastor’s billed as ‘the thinnest man in the Ethiopian business’. The highlight of his zany act was his performance on the one-stringed ‘Japanese fiddle’:
'He was dressed in jet black tights and jacket fitting so tight to the skin that it seems impossible for him to move about. He is the slimmest and ugliest looking nigger we ever saw and his appearance alone is sufficient to convulse and audience with laughter particularly when he takes a seat and lifting two canal boats - sometimes called feet - places a sheet of music against them and commences to play. Then it is that roars of laughter burst forth. He plays upon a Japanese fiddle with one string and although the music brought forth is not the most pleasant to listen to yet it elicits considerable applause...'
Charles, who had trained as a doctor, had recently given up medicine to join Harry in a double act, and they had been seen at Christmastime in London, performing a burlesque boxing match at the Bedford Music Hall, and again at the Cabinet Theatre, Liverpool Street, in what they called ‘The Great Australian Variety Troupe’, doing a burlesque of Italian opera. It may have been this, or else the fact they were represented by Parravicini and Corbyn, the agents who had snapped Emily up on the crest of her first success and were now billing her widely as ‘the talented artiste who has created such a furore as the Grand Duchess at the Standard Theatre’, that encouraged Russell to cast them. But, like almost all of his casting, it worked a treat"

‘THE FAMOUS FINALE to the second act will be danced by Mdlle Rosa and Messrs Raynor, and the whole of the principal characters..’.

Well, I shall add the photo which I (at great expense) had copied when I return to New Zealand. Emily' two vast  volumes are far to carry with me ... but ...
Toddling through ebay this morning, I came upon a photo "Victorian Photo: Cabinet Card: Dapper gents Cigar named: Raymond: Bertin, Brighton". 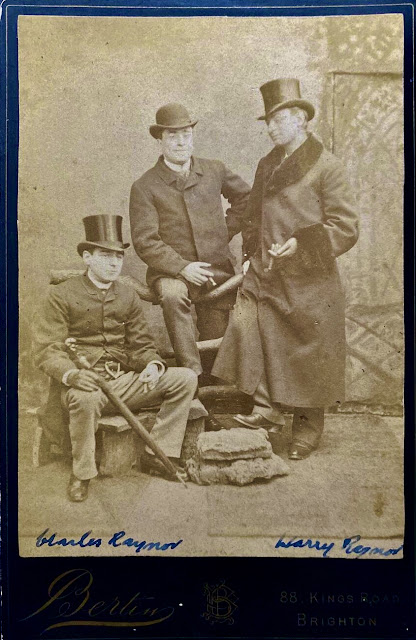 It is actually Raynor, and it is they. And for a fraction of the price that I paid 30 years ago!  I'd love to know who the chappie in the middle is, but that Harry, the skinny, crazy one on the right; and that's Charles, 7 years younger, on the left. And, oh dear, they WERE brothers!
So disgusted was I to find an error in Emily, I determined that 'the brothers Raynor' would be outed. And here is the truth of them.
Mr James Mennie, of Newington and Bermondsey, born in Bray Court, Islington 9 October 1807 to Robert Mennie and Christiana née Sheath, his wife, made a success of his life. He went into the booze business, and became mine host of the Skinner's Arms, Cannon Street West. He married Miss Caroline Amelia Elizabeth Levell, in 1838, and they had five children  -  Alfred, Louisa, Henry, Frank and Charles -- and they prospered. James invested his profits in leasehold real estate, three houses in Falmouth Road from which he derived sufficient income that, when Caroline died, in 1858, he gave up the pub and went into retirement. 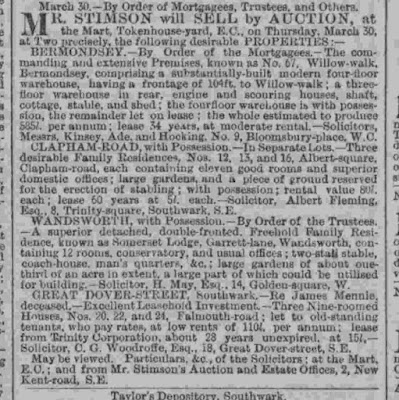 I wonder if the rhinoceros was somewhere in Barberblu (as their burlesque of the opéra-bouffe was later called). But to have billing on a Kelly and Leon programme was already something.
But already in October 1869 the brothers are up as a double act at  the Bedford Music Hall: 'The Brothers Raynor are two of the funniest Niggers to be found in the Music Hall world. They are quaint and extremely grotesque, but never unwarrantably coarse, and the solo of one of them on a curiously manufactured banjo is a really droll effort'. That will have been Harry. It was Harry who was the zany one. 'Their eccentric Ethiopian entertainment, the funniest part of which consisted of a boxing match' 'The original black shadows" at the Alhambra .. and on they went.

Henry seems to have remained a bachelor. But Charles wed, in 1878, a well-liked dancer and burleque performer known as Clara St Leger. Her actual name was Clara Soper, daughter of Bermondsey tailow, William Lemon Soper (1809-1897) and his wife Ann Degenhardt Reed.  The other girls in the family plied the tailoresses needle, but Clara trained with Espinosa and took to the stage, playing on both sides of the Atlantic over some twenty years.
Charles gets a mention on 1873 in a review at Cremorne Gardens -- 'Some exceedingly clever musical and comical sketches were given by a troupe identified with the name of Mr Charles Raynor, who are making just now a considerable stir ..' but by and large, over the next fifteen years the brothers worked as a highly successful duo, all round the world.
In 1888, freshly returned from a tour to the Antipodes, the pair took on the management of the Pack Horse Hotel in Staines 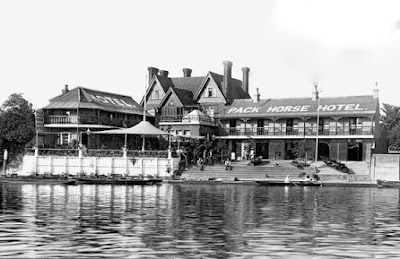 but two years later, Harry died, aged 45.
Charles carried on. He sold the hotel, and went into partnership with Alfred Wood: 'The clown of the pair is Mr Raynor, who certainly knows how to be funny and how to play the concertina. Mr Wood tootles on the bassoon, and his partner improvises on the clarionet, the pair finishing their diverting business with the celebrated Cats' Duet which the Brothers Raynor in the years that are gone served to bring into great popularity'.
But a few years later he, too, fell ill. Within three months, in 1896, both Clara (aged 38) and Charles (aged 47) went to their graves at Staines. A sad end to a very merry story ... 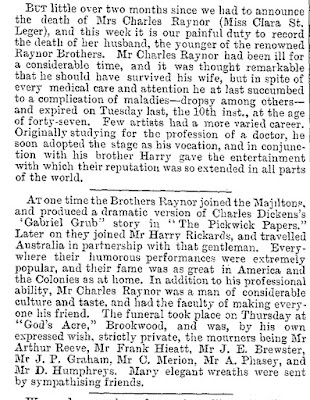 Caroline [Eliza] Brook. Ah, yes. Married Horatio Nelson Hunt. There they are at the 'Pack Horse', in 1891. He's 'brother in law'.  William Brook(e) 'brother-in-law'. But ... how are they brothers in law?  No, I'm not going there. I'll stop here.
I found what I wanted to know.
Here are further details (which I have not checked) from the Australian press:

Posted by GEROLSTEIN at 4:49 PM