When the fat lady sings! And brings out a star .. 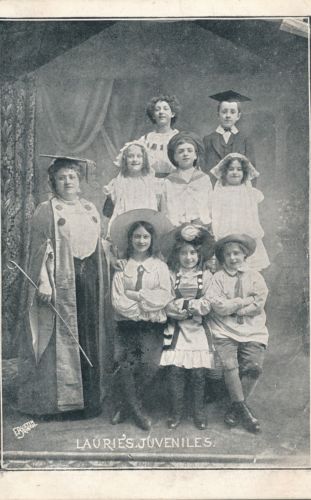 Well, I had a wee scout about, and goodness me! Definitely professional, anything but ephemeral, not acrobats, but everything else. The Carrie Laurie troupe of young performers (usually 3m 4f, plus a little-boy comic) played the halls for some twenty years, from 1900 on, to, mostly, excellent reviews, sometimes topping the bill alongside known performers. And the ranks of the little players, obviously ever-changing, turned out a few to-be-well-known players, including a couple, good heavens!, with tenuous links to myself.

So, first of all, who was Carrie? Well, she was born Caroline Eliza Dodge, in Christchurch, Southwark, in 1867, one of the children of a Bristolian couple, Edward Dodge, painter (houses, I suspect, later a gasfitter), and his wife Sarah Ann née Taylor. There they nearly all are at 37 Price’s Street, Christchurch, in the 1871 census: Edward, Sarah, Mary Louisa, Edward H, Walter (b 17 January 1863; d 1928), Caroline .. eldest sister Sarah Ann (Mrs Charles Stichbury) has departed. By 1881 mother, father, Walter and Caroline are living at 32 Windsor Terrace, Bec[k]ton, Essex, with Mrs Mary Louisa Edwards’s baby …

And, not long after that, Carrie went on the stage. I see her first at Christmas 1884, playing in pantomime at Exeter. In 1886, she made it to a London stage in pantomime at the Standard. In 1889, she went on tour with George Fife’s company, playing the title-role in Aladdin up-to-date and alongside Ramsey Danvers in the famous comedy Turned Up. And some time in there Carrie stumbled. There was, on the bill, both at the following Leeds pantomime, and in her surrounding music -hall dates, a comedy-duet act named ‘Rhodes and Conl[e]y’ ‘the Irish Sunbursts’. They’d been round for a few years (1881-1898), so Alfred Rhodes must have been a little older than Carrie. Anyway, Carrie dallied and the result was a little ‘Beatrice Ann[ie] Rhodes or Dodge’ born in Dublin 15 June 1890. Carrie and Alfred had been on the bill at the Scotia, Glasgow a fortnight earlier! 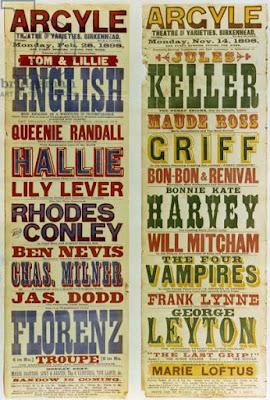 Plump and pleasing Carrie, with her good singing voice, doesn’t seem to have stuck around Alfred thereafter. I see her covering Britain as a singer in the halls, and in pantomime, visiting South Africa in 1898. One little snippet says she ‘toured with Henry Irving’. I must have missed that. Anyway, she had a perfectly good career of fifteen years at not-the-top-level -- in 1900 I see her at the Balham Music Hall – before she changed direction. She began her juvenile troupe. 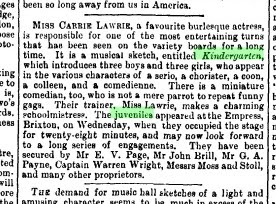 I first see them out at Brixton, Portsmouth (‘Laurie’s Juveniles, in Kindergarten sketch of mirth and music’) and Leeds in November-December 1900, then straight into the Holborn Royal and Gatti’s on the Christmas Bill, playing a sketch with songs and dances under the title The Kindergarten. Kindergarten would serve them many years, varied by such pieces as the Vokee’s famous Belles of the Kitchen and The School Outing.. 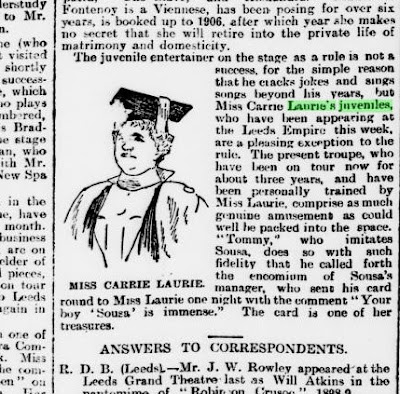 Of the few photos I have been able to exhume of the troupe, I think (judging by the size of Carrie’s girth) that this is probably the earliest. 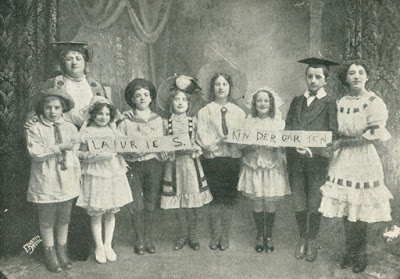 Sadly, the names of the children aren’t mentioned, but several sometime members of the troupe did make adult careers and, of them, I know a little. I thought the 1901 census might help, but it finds Carrie at home at 17 Lambeth Road with just one ‘Thomas Holmes, music hall agent’, for company. (The family historians, who don’t differentiate between ‘Wife’ and ‘Concubine’, reckon this was the below-mentioned Mr Wray). 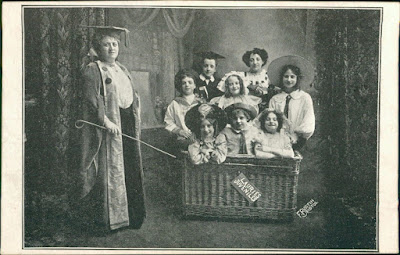 However, in 1911, the company is playing Birkenhead, and their digs lists in full the names, ages and home towns of the ‘Juveniles’ who are accompanied by Carrie, Beatrice (now 20) and Mr John Charles Wray ‘theatre manager’ (b Yorks 29 June 1847; d Teignmouth 4 July 1923, she had been co-respondent in his divorce) and Ruth Miller (dresser b Barking). Here is the list (with a few annotations).

Maybe some of these are in these later pictures. As you can see, I haven’t really been able to follow up the what-became-of of the little troupe. Except in a couple of cases. For this list includes one name which would (when changed!) become very well known on the 20th century stage and screen, and one which would become similarly well-known by association/marriage. And yes, to both of those I, in the next generation, have my wee link. 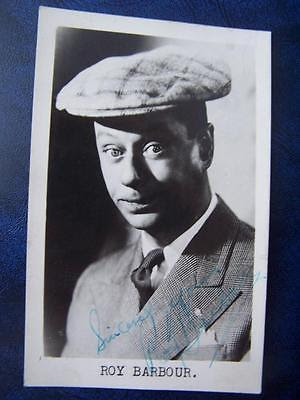 First, Alfred Ernest Crawley (11 August 1899; d 1985). He joined the company in 1909 to take the part of the little boy comic in the red wig whose comicalities were – whoever had played him, from the start -- the highlight of the performance. As an adult, Alfred changed his name to ‘Roy Barbour’, of whom Wikipedia will tell you all, and his son, Peter Barbour and granddaughter, Sue Barbour, came into my life when I cast London’s Barnum. They would be the first folk hired and the backbone of our company.

Then young master Lorriman. Len was one of the sons of a Nottingham family. His career, it seems, ended early, but then his younger brother, Francis (1898-1967) joined up, and he proved much more durable. He changed his name to Frank Laurie, married the singer and (later) famous comedienne, Gladys Morgan, and stayed in the business for many years. I see it suggested that they wed at 16. Not so, they were married at Bristol in 1923: fully 24-5 years old. And the next year Joan Lorriman was born (b Bristol 26 January; d Worthing 16 August 2018). When I was a minor member of The Black and White Minstrels, Joan (Mrs Bertram Frederick Hollman) was lead soprano with one of the Robert Luff companies. 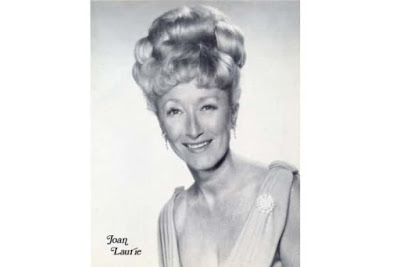 The internet tells me that the radio and concert baritone, ‘Mark Raphael’ (b Whitechapel 7 April 1900; d Croydon 1988), was at some stage a Laurie Juvenile – maybe under his real name of Harris Furstenfeld – and there is whole biography devoted to him which may give more tips. One Ernest Alfred Nicholls is also quoted as having performed with Carrie, and a certain ‘Jimmy Lynton’ otherwise Charles Parsons as well. I don’t know him nor his grandchild who is an English politician named Tony Blair.

The only other Laurie Juve whom I have pick up on is a little madam by name Charlotte Walkingham (b 1897), daughter of a deceased bricklayer and a paper sorter, from Hull. She was had up, in 1914, for stealing handbags, and thereafter vanishes from my ken.

Carrie’s activities were covered occasionally in the press: ‘Miss Laurie and her little charges reside in a large 14-roomed house when in London, at Brixton. One large room contains a piano and organ, and is set apart for practises, another accommodates the dressmaker, who makes all the children's wardrobes for the stage, and another large apartment is used for dressing and making up, which is all done before leaving the house to go to business, to which the kiddies are conveyed in a pair-horse omnibus. Miss Laurie's splendid stage experience admirably fits her for the work of training the young idea. She studied singing and voice production under the tuition of Signor [Albert] Visetti, and toured England and America with the late Sir Henry Irving. She also played several seasons under the management of Mr Willie Edouin, and has appeared as principal boy in many of the leading pantomimes’.

Yes, well, a tad ‘publicity’, but the Brixton bit is true enough. 16 St John’s Road. Fourteen rooms? Wow! I see her there in 1904, so she must have already garnered a few shekels.

Carrie died in harness, on 2 May 1921, at 31 Christchurch Rd, Tulse Hill. Still officially single (in spite of what the family historians say!), and possessed of 3000L. With her, died the Juveniles troupe, whose day was past and whose quality, it seems, had withered.

Beatrice married civil servant William Seymer Whitcher and died at 9 Old House Garden, Twickenham 21 December 1957. Her will gave her name as ‘Rhodes’. I wonder what happened to him. Oh, I suspect her of being the older and heftier ‘Juvenile’ in this photo from … when? Some of the children seem to be in several of the photos …  but, alas, none are dated ...

Any more folk out there whose grandparents were Carrie Laurie Juveniles ..?