Lord Love you Millie Vere! or, Out of Cartesian Gaol

Yesterday, I related how I dragged George Smith Bradshaw, clinking his chains, from the oubliettes of the Geraldine de Maur-Millie Vere prison for too-hard-to-discover folk. The too-hard basket for recalcitrant Victorian vocalists. I was awf'lly proud of my effort. Little did I think that today one of the longest-serving prisoners would escape therefrom as well!

Fifteen months ago I frustratedly posted a tale of woe entitled 'Goddam you Millie Vere' after a day spent failing to divulge her identity. So frustrated was I, that I even christened the Cartesian Dungeon Cell in her (co)-name. I knew I would never sort her out. Never, well ... Today was the day. I finished the very very very final proof-reading of my G&S book, and was fiddling around with bits and pieces and .. well ... I must have left the Dungeon door open ...

"If I hadn't renounced the demon drink 3 1/2 weeks ago, I'd be reaching for the bottle. It is nearly 3pm, and have spent the whole day, since dawn, trying to get to the bottom of Miss 'Millie Vere', Cartesian contralto. Why so long? Because she kept of throwing up HINTS of her identity, and I investigated each one until each ended in a brick wall. Surely, sometime, I thought, in her long career someone must have said something ... well, they did, but ...

But first, that career. My first sighting of 'Milly' or 'Millie' is in 1874, when she joins P E van Noorden's ladies' minstrel group, the Blondinette Minstrels, as pianist. She stayed with the group until 1876 (and maybe longer), rising to feature as a contralto vocalist as well. Another member of the group was harpist Annie Wade, and Annie and Millie could be seen appearing together until 1878. Annie played at Riviere's proms, Millie got a date at the Crystal Palace, another at Glasgow's New Year's Day Concert and joined 'Mr Federici' in a vocal group (1878), and both girls appeared with Paganini Redivius's concert party ('a contralto voice both sweet and pleasing') before Annie disappears. Sister, I wondered. Mother, even? 'Wade' wasted an hour, at least. 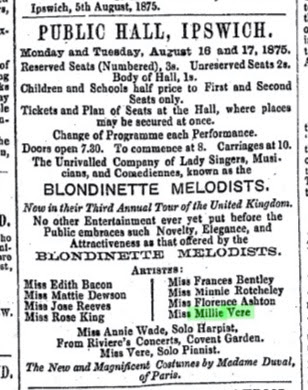 At Christmas 1878 Millie played Polly Larboard in Charles Bernard's Robinson Crusoe at Newcastle and Sunderland ('splendid voice ... repeatedly encored'), with Joseph Eldred as comedian, and was immediately signed for his touring burlesque company, but soon she joined the HMS Pinafore tour, initially as Hebe. During the tour, she played in conductor Ralph Horner's operetta Four by Honours, alongside Robert Brough, Florence Trevallyan annd John Le Hay. As Betsy the maid she went 'far to securing the success of the performance'.
In 1880, she played Jack in the Beanstalk with Nellie Power, before rejoining Carte for another tour. But in May, in Dublin, she was laid low with gastric trouble, and the company went on without her. In 1881, I see her in concert in Sunderland, in 1882, on tour in a chorus role with Emily Soldene in Boccaccio (with Miss Annie Vere alongside her!), then with H S Dacre in the title-role of Olivette, and at Brighton for Little Red Riding Hood, before in 1883 she rejoined Carte for an extended period during which she featured as Iolanthe and Katisha, and, in an emergency, conductor. And a provincial critic mentioned that she was 'Mrs Wallace'. Clue number two, another two hours.
It was fairly clear who the 'Wallace' was. She was seen for some time thereafter in concerts with another ex-Cartesian who went by the name of Welbye WALLACE. 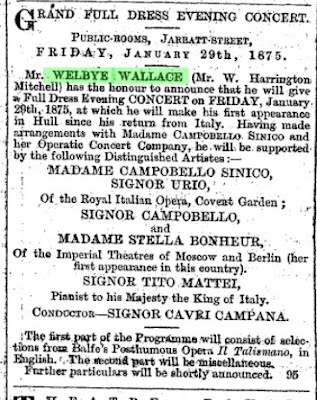 He had previously been Mr W Harrington Mitchell. Whether that was his real name, I knew not, but under that name he had sung in amateur concerts in Cheshire and Hull in the early 1870s. Maybe he was the William Chandler Harrington Mitchell gent from Manchester. He had made a big effort to establish himself 'after his return from Italy' as a tenor, concert giver, lecturer, manager, musical you-name-it in the 1870s, but without real success. So, he ended up as singer-staff with Carte between 1882-5. And, apparently, married or 'married' Millie. Ah, its supposed to have happened in Dublin: amazing how many performers got married in Dublin.

After leaving the Carte, Millie was seen in concerts (Crystal Palace etc), took part in the Drury Lane panto of 1887 (Puss in Boots) behind Tillie Wadman and Letty Lind, and in 1888 went on the road as Teresa in a revamp of the musical Rhoda, with show's original star, Kate Chard and her husband, and Cartesian Robert Fairbanks. It lasted a little longer this time, but kept clear of the West End.  Millie was soon touring as Javotte in the much more successful Erminie (1888-9). In 1889 she and Welbye (and Fairbanks) are on the bills at Southsea's Clarence Pier, but in 1890, I see her only singing for the Masons. In 1891 she sang Alfred King's The Epiphany and, seemingly, the Verdi Requiem at Brighton, in 1892 in a concert of mainly old Cartesians, playing 'her original part' (it wasn't) in Quits, before getting a job in the West End playing in The Wooden Spoon as a forepiece to The Wedding Eve. The Wedding Eve topbilled Decima Moore, Mabel Love and Kate Chard, so maybe contralto Millie was not an understudy.
Thereafter, I spot her in a couple of one-off performances (The Competitors, A Laggard in Love), as Oberon in pantomime at the Brighton Aquarium (Jack and the Beanstalk 1894) and Titania in Cinderella in the north (Cinderella 1895). Cinderella was played by a Daisy Wallace. I started looking, but enough is enough and the age was wrong. But, by now, Millie was what she needed to be: a character lady, and the stage jobs began flowing. She toured as Mrs d'Erskine to Billie Barlow's The Bicycle Girl, as Mrs Smith in Dandy Dan the Lifeguardsman, as Madame Moulinet in The Topsy Turvey Hotel, as Miss Basingstoke in The Gay Grisette ... and, I thought, it stops here. But then I found a 1909 notice from the Granville, Walham Green: Who's my Dad? with Millie Vere as Miss Semolina Snipe ... and there she is writing
to The Stage in 1913 ...
So she should be in five or six censi, but I couldn't find her (or 'Welbye') in any of them. And I've tried. Wade, Wallace, Mitchell ... oh, I should say that one provincial paper billed her as 'Clara Millie Vere'. So I've looked there too ... the nearest I've got is a widowed Mary Ann Wade née Wilkinson, in 1871, at 1 Canonbury Square, Islington, with two daughters, Melina 24 'musical profession' and Clara 22 ditto. In 1881, Melina (1864-1923) is still professor of music, but Clara has gone. Annie and Millie? Straws are made to be clutched at.
Post scriptum a year later:
Glad I didn't clutch them! They would have broken.
First discovery. Mr W Chandler [H] Mitchell 'actor' had a daughter. Daisie Marie Wade Mitchell ... yes, it's Daisy Wallace!!  But WADE!  Daisy married another actor, William Willoughby West  ... Amelia Annie Mitchell is a witness ..  MILLIE ... Looks as if I were right first time up. Died Amelia Ann Mitchell of 13 Drakefield Road, Balham, Widow, 5 July 1931 ... administration Daisie Marie Wade West (1882-1952).  Oh, Millie. Her estate was L8 4s 6d. But what is this?
I go in search of Wade .... and there we are! Mrs Amelia Annie Mitchell aged 45, born Bloomsbury, married, with her sister, Emily McGee, in the 1901 census in Streatham and 1911 ... 1891, William, Millie, daughter Daisie, two servants, in Reigate ...  Wait a minute, her unmarried sister is named McGee? What happened to Wade?
1861, John McGee, 48, boardinghouse keeper 5 Montague Street. Wife Alice née Gillett, daughter Amelia born 21 January 1855. So that's Millie!
But who is Annie Wade, apart from Jules Rivière's pet harpist? And why did Millie give the name Wade to her daughter? Well, I'm skipping this one. All I know is that the Wade connection led to Millie's disrobing! The rest can wait.
VERE, Millie [McGEE, Amelia Annie] (b Bloomsbury 21 January 1855; d 13 Drakefield Rd, Balham 5 July 1931).  I shall have to give the too-hard basket a new name now  ...
Posted by GEROLSTEIN at 10:15 PM