.
A few pictures, that are lying around on my desktop ... It seems a shame to throw them back as undersized pieces in the jigsaw of the entertainment world ... a world which, before television and mostly before consequential cinema, harboured in its ranks endless little, unpretentious performers and 'acts', barely professional, if at all, for little unpretentious venues ... The Wortley Institute Black and White Minstrels predated Robert Luff's famous company by half a century. Their 'black', however, seems to have been limited to their cuffs. I have only found one record of them performing, in 1907 at ... Hull! 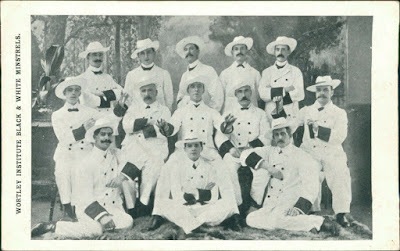 The 'Dandy Coons' apparently did summer season in Margate in 1908 ... 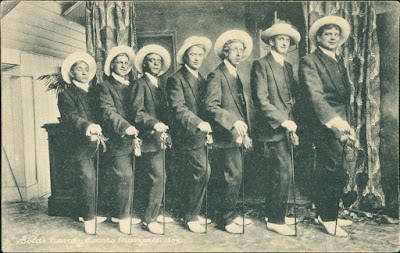 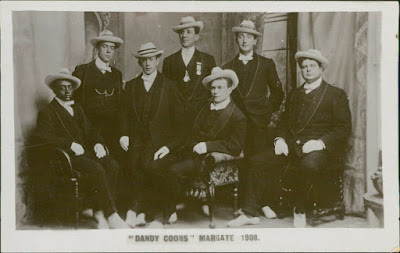 More 'dandy' than coon? But the expression was current.

The Five Aubreys. A little kiddie song and dance act. Which one newspaper did the honour of describing in detail 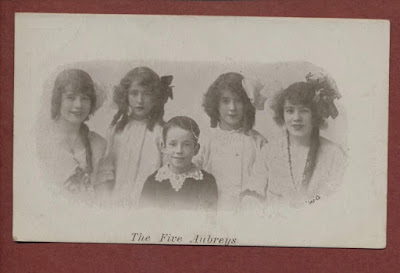 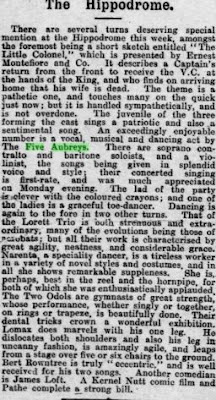 Then there was 'Mr J W Delmar' 'Australian ventriloquist and entertainer' who turned up on various piers and in various halls in England and Wales in the late 1890s and the 1900s, before settling in Bridlington as manager  of the local People's Palace .. 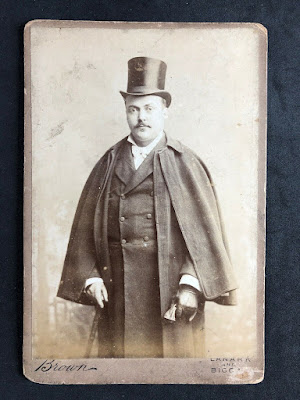 At the other end of the scale of professionalism, came 'concert-party' groups like the long-lived Fol de Rols... 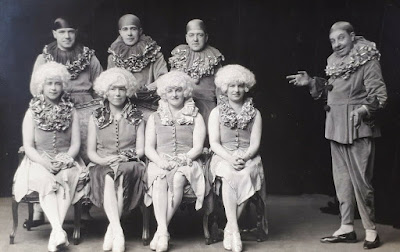 However, my favourite amongst the kind is 'Cecil Barrie's Empire Strolling Players'. It was a group which came from the Isle of Wight, as far as I can work out, and 'group' was rather pushing it. It basically consisted of Mr 'Cecil Barrie' and his wife 'Winifred Truce'. He gave comic songs, she gave character songs, they did a sketch, and a thought-reading act ... and it seems that on each occasion they donated the takings to some local charity, from Bledlow, Wilburton, Tipton St John, Colston Raleigh to St Giles-in-the Wood. They apparently truly strolled, for this photo survives .. 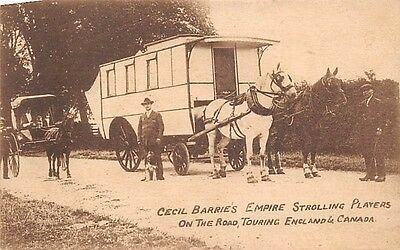 Yes! Canada! Also, we are told, 'during the war, he spent much time entertaining the wounded soldiers'.

'Cecil Barrie' was no fly-by-night act. He and the missus kept travelling  to Burnham, Henbury, Biddisham, Norton .. and I last spot them in 1929 at Horsley. And that's it. And I am pretty sure that I know why. 'Cecil' died. Now, of course, 'Cecil Barrie' wasn't his real name. And I am 99% sure I've cracked him. I reckon he was one Alfred Charles Linington (b Ryde 17 October 1885; d Ryde 19 December 1930), son of a Ryde waterman who, himself, worked as a pleasure boatman. I think so, because 10 October 1906, this Alfred married Trucie Rashley (b Ryde  1879; d Ryde 5 April 1965). Trucie's full name was Adela Winifred Truce Rashley and she was a dressmaker. 'Winifred Truce', got to be, don't it? 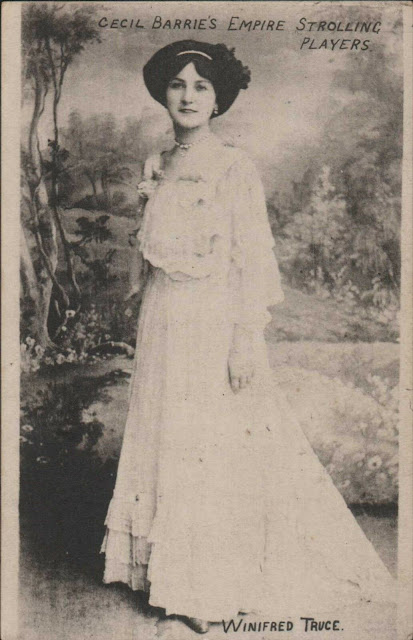 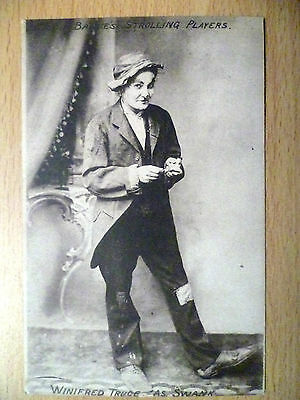 Trucie survived not only her husband, but their daughter Mrs Vera Hofman (1907-1964) and these photos of their jolly semi-professional life in the theatre survive them all.

And my desktop is cleared ... now I can start all over again!
Posted by GEROLSTEIN at 12:02 AM