A Piratical Maid of Brief Fame ...

.
Production photographs of early and mid-Victorian musicals and operas aren't too easy to come by. I suppose it was a case of 'hold it, snap, bang, wallop ... you MOVED!'. But, in the days before magazines such as Play Pictorial provided theatre-goers with the kind of material now marketed at vast price in 'brochures', portraits in character had become the vogue.

I happened on a jolly little group of rather classy ones this morning. Four of the ladies from the Carl Rosa Light Opera production of an English adaptation of Chivot and Duru's Surcouf (music: Robert Planquette) under the title Paul Jones. The English production, however, had a gimmick that the French had eschewed. The piratical leading man was played by a statuesque contralto in travesty. I've written about this in my larger books, so I'll not go into it again. But the lady who was chosen to swash her buckle was this lady, and swash it to exceedingly good measure she did. 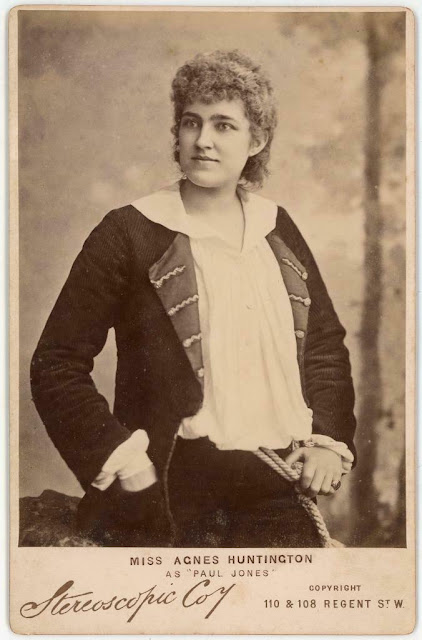 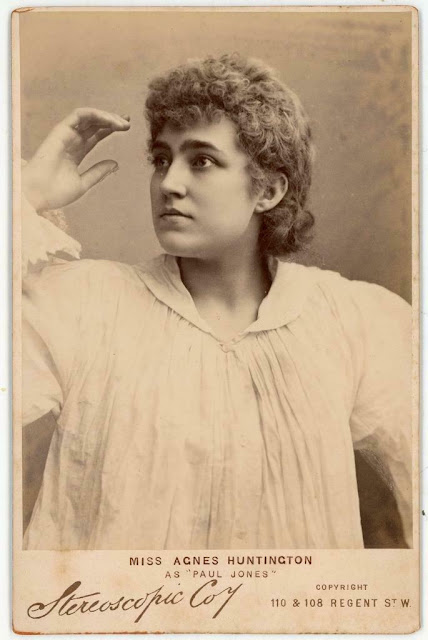 The young Agnes Huntington, youngest daughter of a Kalamazoo hardware dealer, apparently studied voice in Germany and made early appearances on the concert stage in Baltimore (1883, alto to Amy Sherwin’s soprano in Elijah), Boston (1884 billed as being ‘of Worcester, Mass’), Washington (1885), Dresden, London, at the Paris Trocadero and with the New York Philharmonic. She was first seen on the American musical stage at Carll’s Opera House, New Haven, in 1885 playing the Gipsy Queen in The Bohemian Girl, the Princess in Giralda and Célestine in François les bas-bleus with the Boston Ideal Comic Opera Company. She played several seasons with the Boston company, appearing with them in the contralto rôles of their light operatic repertoire and in the untried Alidor at the St Paul Opera House (1887). She then crossed the Atlantic once more, and starred at London's Prince of Wales Theatre with the newly formed Carl Rosa Light Opera Company, in the travesty title-rôle of Planquette's Paul Jones (1889), a part which had been created in the provinces by baritone Michael Dwyer. She caused a sensation as Paul Jones, and The Era reported 'a more brilliant début has not been known in connection with comic opera'. George Edwardes was amongst those dazzled by the lady and her performance, and he announced plans to build the Agnes Huntington Theatre, where he would feature Miss Huntington at the centre of her own company.

At the end of the run of Paul Jones, she was cast by the Carl Rosa to play another male rôle, Wilfred, in the medieval comic opera Marjorie (1890), a rôle again played in tryout by a male performer. After one week of performances, however, she walked out and, when taken to court by theatre-owner Henry Leslie, claimed that the rôle was unsuited to her voice. Since she refused to go on tour with Paul Jones as an alternative, Leslie was granted an injunction that prevented her from singing. Ultimately she was fined £1,000 and costs, and she then announced she was returning to America to play Paul Jones. When news filtered back to Britain that she was being paid a salary of $7,500 a week to do so, the degree of `unsuitability' of Marjorie became evident.

The `stately, handsome American girl' caused something of a stir back in America as well, but a touch less in singing circles than in social ones. It was noted that the President himself came to her Washington first night of Paul Jones. She appeared on Broadway both as Paul Jones and in the title-rôle of Captain Thérèse, the new Planquette piece that had been commissioned by Carl Rosa especially to highlight her talents, before her contract-breaking act, and then, in 1892, she vanished from the world of the light musical theatre as suddenly as she had come, into marriage as the exceedingly wealthy Mrs Paul Drennan Cravath, wife of a rich, social and distinguished lawyer and patron of the arts. I see them in the 1910 census, at their home in East 34 the Street, with a staff of ten servants. In the 60 years of her retirement, however, she maintained an interest in musical theatre, founding the Little Theater Opera Company and encouraging young singers.

Edwardes built his theatre, but its first leading lady was Ada Rehan, and it was called after his American partner in the venture, Augustin Daly.

The heroine of the affair, Yvonne, was Matilda ('Tillie') Honner Wadman (b Westminster 3 May 1857; d Leeds 23 December 1892) an experienced and popular singer who had had a fine career since her days as a minor goddess in Orphée aux enfers at the Alhambra, and  at the Gaiety Theatre singing 'Tripping O'er the Hills Amongst the Buttercups and Daisies' in the Christmas burlesque of 1877. She played principal girl opposite Lydia Thompson, Suzanne in Madame Favart, toured long in the title-role of Falka, starred opposite Nellie Farren and Fred Leslie in Little Jack Sheppard at the Gaiety, starred opposite Arthur Roberts as Indiana ...  Following Paul Jones, she went to Leeds to rehearse for pantomime, but was taken ill and died. 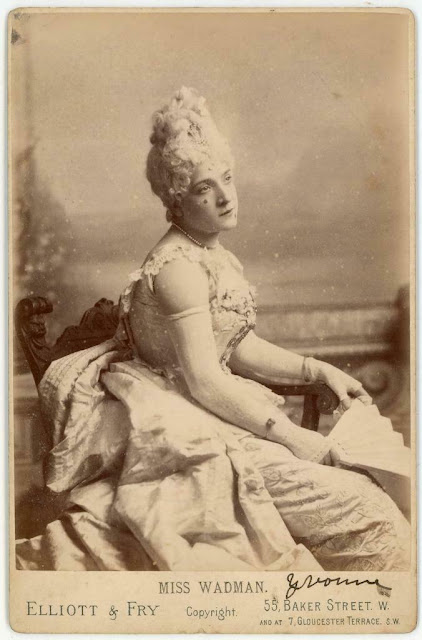 The soubrette of the opérette was another popular lady, Phyllis Broughton, whose career in the London musical theatre was long and memorable. 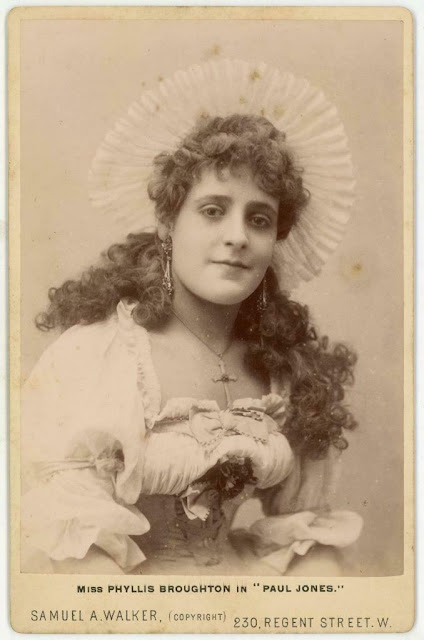 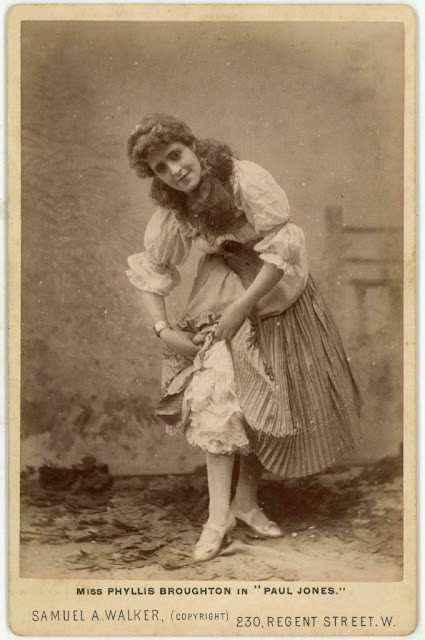 BROUGHTON, Phyllis[WRIGHT, Phyllis Harriet] (b Lambeth, London, 17 March 1860; d London, 21 July 1926).
Daughter of a Norfolk architect’s clerk and his theatrical wife, Phyllis Broughton made her first stage appearance at the age of 14 as a principal dancer at the Canterbury Music Hall (Ceres 1876, The Reign of Love 1877 &c), and she and her sister, Emma, were subsequently hired by John Hollingshead for the Gaiety Theatre. They played there principally in the house’s burlesque productions and Phyllis graduated from featured dancing parts to leading rôles through Ben Zoualle (‘with a schottische’) in The Forty Thieves (1880), Prince Chiboko in Whittington and his Cat (1881), Ho-Fi in Aladdin (1881), Sir Ralph Mont-Faucon in Little Robin Hood(1882), Henry in Valentine and Orson (1882), Joliquet in Bluebeard or the Hazard of the Dye (1883), Ferdinand in Ariel(1883), Mary Kenyon in Called There and Back (1883), Leucippe in Galatea or Pygmalionre-versed (1883), Maimoune in Camaralzaman (1884), Little Don Caesar de Bazan (1884), Orestes in Our Helen (1884), Ophelia in Very Little Hamlet (1884) and Olinska in Mazeppa (1885), before leaving the Gaiety to join the burlesque and comic opera company at the Avenue Theatre, under the direction of Claude Marius (Sir Walter Raleigh in Kenilworth, Onduletta in Lurline, Polly Hopkins in Robinson Crusoe, Lady Prue in Indiana, 1886, Suzanne in Madame Favart, 1887, Follow-the-Drum in The Old Guard 1887).
She created and played a series of soubrette rôles with the Carl Rosa Light Opera Company at the Prince of Wales (Chopinette in Paul Jones, 1889, Cicely in Marjorie, 1890, Marcelline in Captain Thérèse 1891), appeared as Virginia Squeeze in the pantomime The Swiss Express (1891) in the musical playlet A Pantomime Rehearsal (t/o Lily Eaton-Belgrave) and in burlesque (Catherine of Rochelle in Joan of Arc, t/o Dolly in Blue-Eyed Susan 1892) before moving into the latest style of entertainments, in the very first of George Edwardes's modern-dress musical comedies.
She was cast in the travesty rôle of the teenaged Lord Clanside in In Town(1892) and after appearing in the Gaiety’s revival of La Mascotte(1893, Fiametta) and the unfortunate All My Eye-van-hoe(1894, Rebecca Hothouse-Peach), she succeeded Lottie Venne as Lady Virginia Forrest in A Gaiety Girl, the first of a series of rôles as smart middle-aged ladies which was pursued with Arthur Roberts in Gentleman Joe (1895, t/o Mrs Ralli Carr), Biarritz (1896, Tessie Carew), Dandy Dan the Lifeguardsman (1897, t/o Lady Catherine Wheeler) and HMS Irresponsible(1901, t/o Victoria Chaffers). She also replaced Cissy Fitzgerald in the central rôle of The Prince of Borneo (1899) and appeared as the Princess in the seasonal musical The Swineherd and the Princess (1901). Appearing less frequently in her forties and fifties, she was seen in The Earl and the Girl (1903 and 1914, Virginia Bliss) and The Dairymaids (1906, 1908, Lady Brudenell) as well as in a small number of non-musical plays. In 1905-6 she appeared on the music-halls in the musical comedietta The Chief Cook (Nancy Dene).
An attractive and spirited performer, Broughton was notably popular with both public and professionals through some 20 years of regular London performances. She was on several occasions called in to replace an insufficient or ailing leading lady and was a favourite (ie supportive and uncomplaining) partner of the notoriously unreliable Roberts. She also spent a certain amount of time at the centre of some nice publicity-worthy scandal, and won 2,500 and costs from Lord Dangan in 1889 in a breach of promise suit. When the said Lord Dangan grew up, and had a son, he ended up on the other end of the stick, for his son ran away from home, found himself disinherited, and ended up as a Gaiety Theatre chorister (1911) on 45s a week.
Miss Broughton was the daughter of Emily Charlotte Jecks, and thus the niece of another top-class musical actress, Harriet [Martha] COVENEY (b London, 1 November 1827; d Ramsgate, 24 February 1892) and cousin to her daughter, Clara Jecks. Phyllis’s sister, Emma [Marion] BROUGHTON(b Lambeth, 1863, d Paddington, 28 February 1926), who had a less colourful career as a performer (Mynheer Jan, Wagner in Faust up to Date etc), later became the wife of the prominent music-hall proprietor Edwin [Adam] Villiers. 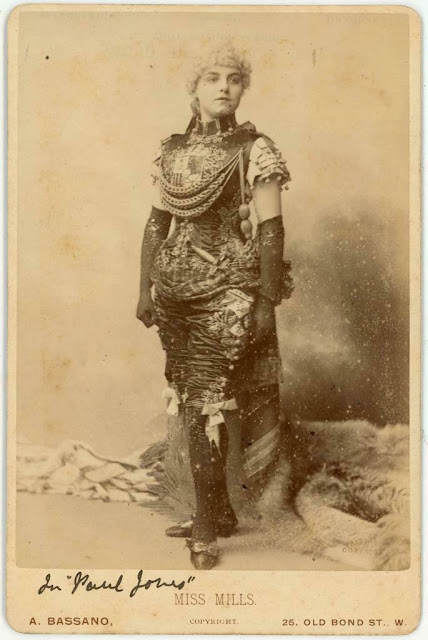 Miss Mills was Jeanie Mills, she played someone named Captain Octroi, and all I know of her is that after the run of Paul Jones she was taken in to the Rosa Opera Company where a concert review tells us that she had 'a remarkably rich and powerful contrlato voice'. I suspect she may have been Miss Huntington's understudy. She played Liba in Lurline, Inez in Trovatore, in L'Étoile du nord, Amina in La Traviata, a Maid of Honour in Les Huguenots, Madame Beaupré in La Fille du régiment through 1890-1, and then ... Well, a Jeanie Mills gave a dramatic recital at Steinway Hall in 1900 (of 10 Warrington Crescent, Maida Hill') ...


PS Sure enough, some of the rest of the set turned up on ebay a few days later. Same source. Not in great condition, but for the record ... 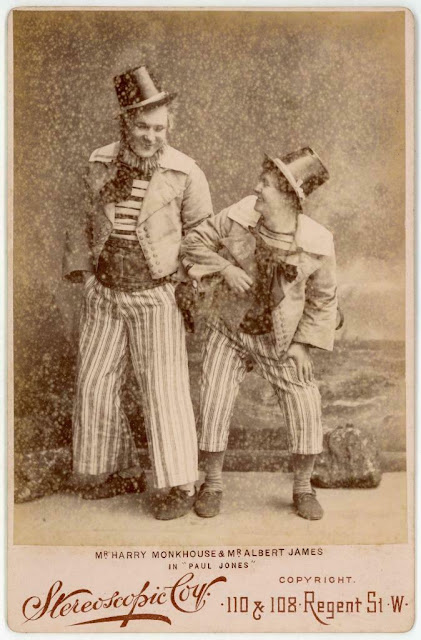 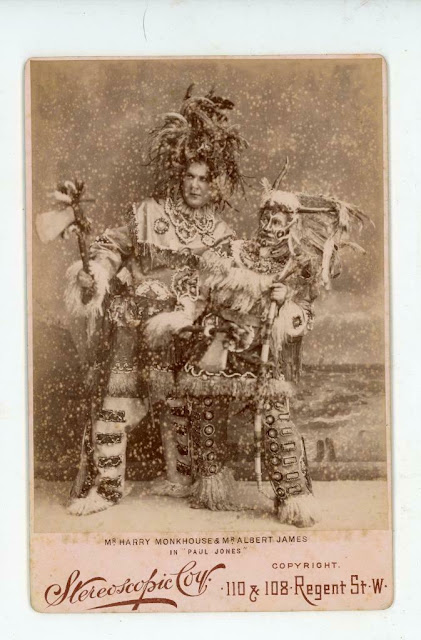 Posted by GEROLSTEIN at 8:39 PM