Today, in the expanses of Rookwood Cemetery, Sydney, Australia, with only the workmen as witnesses, a vacant-looking plot of earth became a last resting place. Oh, the grave in question had been occupied for 85 years, but the 93-year-old man buried therein had come from an old people’s home, and no-one had come forward to pay for a gravestone, or anything else but a little oblong hole … Until this year of 2019 … 180 years after his birth … when the man known to the theatre world as ‘Johnny Wallace’ finally got his little memorial. 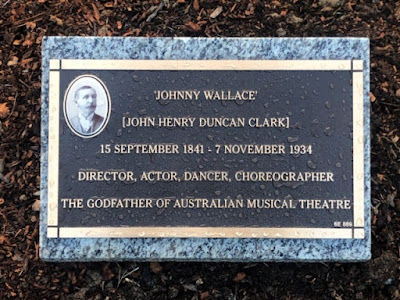 So, why now? Well, first you have to know who Johnny was. Why he was kind-of-celebrated, why he became forgotten, and why, in the last decades he has been brought back to the limelight he once knew so well. 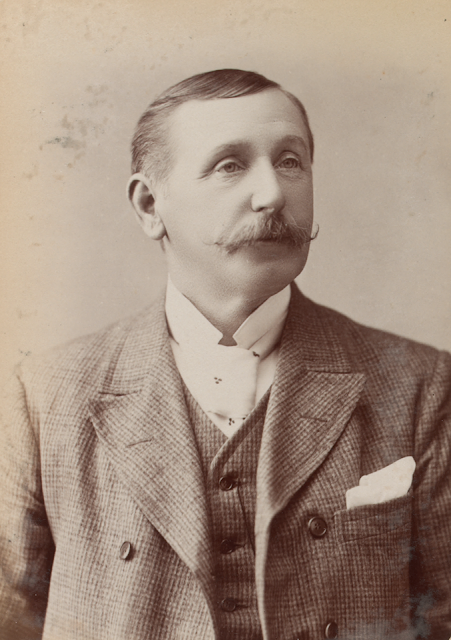 Here is a very brief version of John Clark’s career. He came into the theatre as a young man on the coat-tails of his ill-fated brother, who worked as ‘Alfred Wallace’. Thence the stage name of ‘J D Wallace’. He ‘grew up’ theatrically at Greenwich Theatre, where he sang, danced, played comedy, and, as one did in a little company, performed any other task wanted. In 1869, he was taken on by Emily Fowler ,at the Charing Cross Theatre, and there he found his niche. While still performing, he became, at 28, Miss Fowler’s stage director. His skills were quickly noticed, and he was ‘borrowed’ by the Swanborough family, at the Strand Theatre, and there he made his mark. He directed and choreographed W S Gilbert’s early musical The Gentleman in Black, the important 'musical comedy', Nemesis, and much of the rest of the voluble output of the best burlesque theatre in town, before he was promptly snapped up, at the end of his contract, by Emily Soldene, as comedian-burlesque dancer-director for her growingly-famous troupe …

With Soldene and her opéras-bouffes he would cross the world, introducing the Antipodes to a standard of stage-direction-cum-choreography that they had never seen before, and scoring a self-effacing hit within the huge success of the great Soldene troupe. Although he returned for a while to Britain, he did not remain, and returned to Australia to spend many years directing versions of the latest London hits for the best local managers, notably Williamson and Musgrove.


But Johnny wasn’t just a colonial director. He had one last London hurrah! to come. When Musgrove took London’s Shaftesbury Theatre, and there staged the American flop musical The Belle of New York, he imported 68 year-old Johnny ‘fidelity personified’ from Australia to direct. Johnny turned the piece into one of the biggest musical hits of the era, took it on the road for the first of its endless tours ... And then he went home. 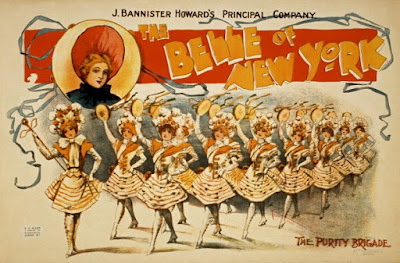 He lived the last 35 years of his life in Australia, directed Australia’s megahit A Chinese Honeymoon in 1903, saw age creep on and new fashions in theatre arrive, but, as late as 1911, was still writing and directing pantomime for amateurs, as he and his times faded from fashionable memory. He was now just an old man with children who weren’t really interested, a garage full of theatricalia, and his garrulous memories… 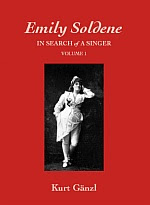 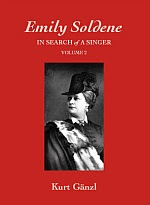 Johnny’s resurrection started when I, Kurt Gänzl, wrote a vast 2-volume biography of Soldene. Johnny is one of the central characters, of course. Then, Julie Simpson, a great-great-granddaughter, who did value what her ancestor had been, read some of my writings, and got in touch. I told her ‘get thee to Rookwood and photograph the tomb’. She got, and came back to me with the distressing news. An unmarked grave. We decided that this should not be … dug deep in our wallets … and today Johnny has his little gravestone. I hope to get to see it sometime. But anyway, Johnny, old pal, you are not forgotten. Hehe, and you can tell your descendants their name isn’t Wallace ... it’s Clark. 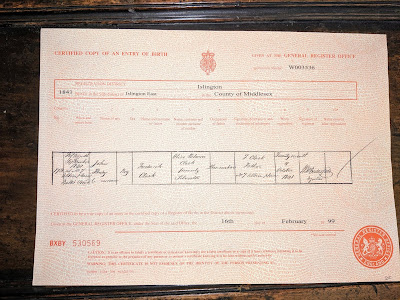 Post scriptum: Today, Julie paid a visit to Rookwood cemetery and Johnny's little gravestone, and took some photographs. There you are, old chap. Good to see you ... 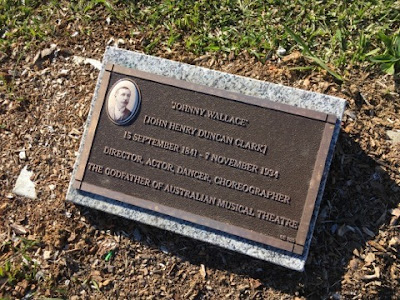 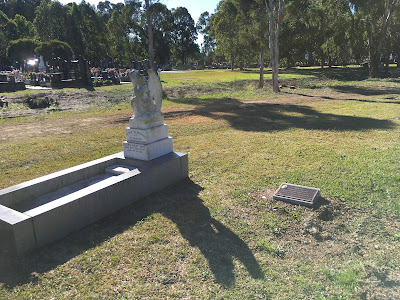 Posted by GEROLSTEIN at 4:18 PM