.
Alongside the Paul Jones photographs which I lighted upon, yesterday, were a number of other pictures of singing ladies of the late 1880s. The nineteenth century collector was, clearly, only interested in the ladies. The picture which interested me the most was a portrait of a lady labelled 'Annie Allen'. Our collector had scribbled semi-legibly on the back 'sang well but harshly and not pretty'.

Of course, her semi-legible name was not 'Annie Allen'. But, this was an easy one for me. Because I had already researched the lady in question. I just didn't have a photo of her ... so what more obvious than I should put piece and picture together? And here they are .. 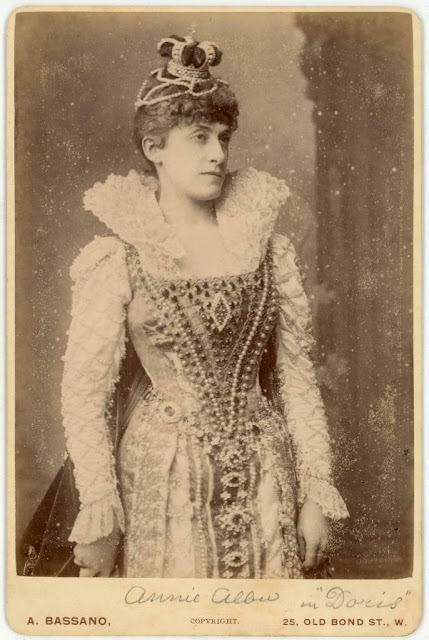 Annie Albu was born in Sheffield, England, a daughter of the German-born rabbi, Berthold Albu, and his wife Bella née Silverstone, a member of another prominent Jewish family in the south of England.

Albu, the son of a Berlin silversmith, had a rather up and down career as a man of religion. The 1861 census, for example, lists him as a ‘rabbi without a place’ but also as a ‘teacher of Hebrew, German and music, piano, violin and singing’. Mr Albu had many more than just two strings to his fiddle. However, after a career which took him for periods to various British towns and cities, in most of which he produced at least one child (Exeter, Liverpool, Leeds, Cheltenham, Brighton, Sheffield…) to add to his blooming family, he ended up in South Africa as the ‘first minister of the Griqueland West (Jewish) Congregation'. This engagement probably had something to do with the fact that two relations, the brothers Sir George Albu and Leopold Albu, had hit it extremely rich with their General Mining and Finance Corp in the Rand. In any case, Berthold Albu left Britain for Africa where, as far as I know, he ended his life.
By the mid-1870s, however, when their father emigrated, three of his daughters had been launched as vocalists: Annie (b 1858), Julie (b Leeds 1863; d Honolulu, 1 June 1937) and Rosa (Rose, Rosie) (b Cheltenham 1865).

My first sighting of the girls on the public platform is in 1874, when ‘Herr B Albu and the Misses Albu’ are billed at the Royal Hotel in Edinburgh. And then ‘Annetta Albu’ turns up at the Teatro Sociale in Asola in 1878, singing La Sonnambula.

Annie went on to attend the Royal Academy of Music, mezzo-soprano Julie studied at the Guildhall before taking up a scholarship to the Royal College of Music, and Rose presumably did something similar, for at the turn of the 1880s, all three were out in England professional singers. In 1880, Julie and Rose can be seen at Turnham Green, singing duets.

But it was Annie who made the first mark. On 10 January 1880 she made her first appearance on the English stage, at Her Majesty’s Theatre, singing as a soloist with the Carl Rosa Opera Company, in the little role of The Messenger of Peace in Rienzi, created in its English version, the previous year, by Georgina Burns. ‘Miss Annetta Albu, evidently a novice and in possession of an agreeable soprano voice, was the Messenger of Peace, to whom Wagner has assigned one of the sweetest airs in the opera.’ WhenCarmen, was done, the young singer was given the role of Paquita.

By August of the year, however, ‘Annette Albu’ (as she had for the meanwhile become) was a prima donna. Not with the Carl Rosa, of course, but with the very fair touring opera company run by tenor George Traverner. She was assoluta in the company, appearing as Maritana, Amina, Violetta, Marguerite, Martha and in such less frequently given pieces as The Rose of Castille, through till the end of the year, and finding herself much liked. ‘She jumped into fame and favour at once’ reported the Dublin press.

In the early part of 1881, Miss Albu moved on to the small ‘National Grand Opera Company’ and the van Biene opera company, where she shared the soprano work with Blanche Cole, Mathilde Bauermeister, Arabella Smythe and Philippine Siedle. She sang at the promenade concerts at Hengler’s Cirque, at the Alexandra Palace in a War Songs concert (but nevertheless made her encore with the aria which would become her trademark, ‘Angels ever bright and fair’), and in concerts in London and the provinces, before in October 1881 she made another debut, in the West End, in the starring role of a revival of Clay and Gilbert’s comic opera Princess Toto. 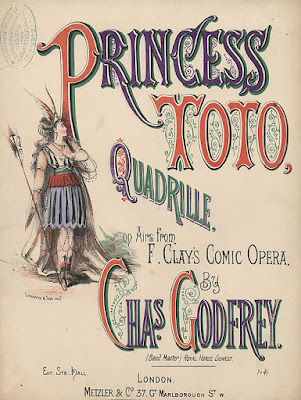 Princess Toto’s title-role had been created a decade earlier by the ebulliently sexy burlesque actress, Kate Santley, who had been found by some critics to have done less than justice to the role’s soprano opéra-bouffe style music. Gilbert was undoubtedly behind the choice, this time, of a strong young vocalist, and since Miss Albu had proven herself a more than adequate actress as well, her engagement was not a strange one. However, those who had liked Miss Santley’s version, and who liked the bouffe side of the piece, in preference to the musical, weren’t happy. Reynolds Magazine sniffed that although she sang well she ‘hardly rivalled some of the former impersonators of the character’. Since the part had, in England, been played only by Miss Santley (briefly, in America, by Leonora Braham), he was more or less saying her preferred Miss Santley. But Miss Albu was found altogether decidedly satisfactory. Alas, the piece failed to catch on, and a couple of months saw John Hollingshead’s production closed down.

In 1882, the girls visited South Africa (In the 1881 census all the children and mother are in England, so it seems Berthold must have gone a rabbi-ing in Africa alone), and on her return Annie was cast in another opéra-bouffe production, singing the Princess Fantasia in a new spectacular production of A Trip to the Moon. It proved little more popular than Princess Toto, and Annie abandoned opéra-bouffe and returned to the opera stage with Carl Rosa.
During this season, her status within the company rose sufficiently to justify the subtitle ‘prima donna of the Carl Rosa’, for she rose to take over Micaela in Carmen, Lydia in Colomba, and sang both Marguerite (‘a decided success’, ‘won an unqualified success with her natural and graceful acting and her cultured vocalisation’) and Arline during the company’s season.

In 1884 a company calling itself ‘the Royal English Opera’ camped briefly at Covent Garden, with Annie listed among its sopranos, but later in the year (15 May) she returned to the same venue for an appearance with Sembrich, Soulacroix and de Reszke in a revival of L’Étoile du nord. The Times judged her Prascovia, in this elevated company, as ‘very charming’.

However, for the next few years Annie Albu stuck largely to the concert stage, singing at the Covent Garden Proms and several other series organised by Rivière, at the Blackpool Winter Garden where she became a repeating favourite, as the vocalist with the Vienna Ladies Orchestra, in Messiahs from Manchester to Halifax to London’s Albert Palace, and regularly in Leeds and the environs. She also became Mrs Victor Adolphus Wartenberg, (21 June 1886) the wife of a successful Blackpool doctor of Prussian origins, to whom, between 1887 and 1890, she bore three daughters: Winifred, Ethel Annie and Isabel. Wartenberg died of syncope, brought on by an over-hot bath, at the age of 43, in 1895. 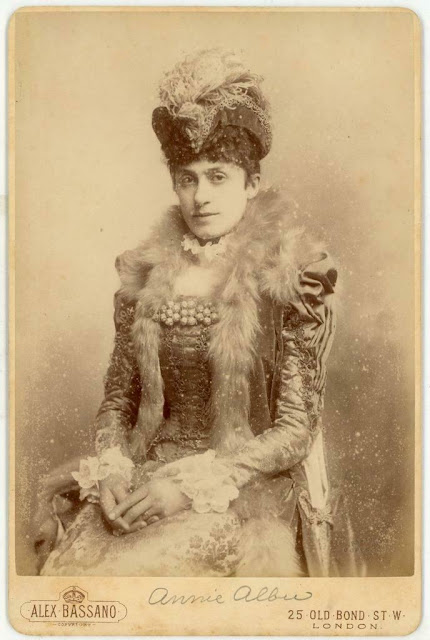 In 1889, a third London light opera producer selected Annie Albu to be his leading lady. Henry Leslie had had huge success with his second-hand production of the record-breaking Dorothy, with Marie Tempest as its title star, and he planned a follow up with the clone-ish Doris, with the young Annie Lea as star. But Miss Lea fell ill (or ‘fell ill’) and Annie Albu was called in to star, alongside Rosa colleague Ben Davies. She did her usual splendid vocal job (‘The Parting’, ‘Learn to Wait’, ‘Love’s Race’), but, once again, she would be found rather less free-flowing than the exuberantly popular Miss Tempest had been. Doris struggled along, until after two months Leslie brought in Miss Tempest (who happened to be his current concubine) to boost the temperature and the box office.

This time, instead of turning back to opera, Annie Albu, turned to the music halls, and was engaged by Charles Morton to appear at the Alhambra. She proved to have the popular skill and style needed to get across ‘Il Bacio’, ‘Comin’ thru the rye’ and the likes, not only to the public’s satisfaction but also that of the critics (‘High class vocalists are unfortunately rarely heard in the variety theatres…’). In 1892 she featured on the opening programme at the new Manchester Theatre of Varieties.

However, Annie had not turned definitively to the halls. In 1892, she once again took to the comic opera stage in a three-week piece entitled Brother George (16 May, Dolly Martin) and as Violette in another shortlived (but better-liked) work named Cigarette. In 1893 she visited America, and sang in opera for Oscar Hammerstein at the Manhattan Opera House, and later the same year, appeared as Micaela and Arline for Augustus Harris at Drury Lane.

In 1895, she visited America a second time, this time to play the soprano role of Lady Dodo Singleton in the Broadway production of the London hit, The Shop Girl, and in 1897 she returned to South Africa at the head of a short-lived variety concert party.

Annie Albu apparently remarried, and in 1898 she had a further child, James Edward Patteson. She continued to make occasional appearances as a vocalist and, indeed, in 1904 promoted her own concert at London’s St James’s Hall. The Times reviewer acknowledged that’ it was once a very pretty voice’ but ‘though time has been very kind to this singer’, she had struggled to get over the Landon Ronald orchestra in a repertoire of hackneyed pieces.

In her later life, Annie Patteson lived in Southsea, and she died on the south coast in 1927 at the age of 69.

Annie Albu travelled a good deal in the course of her career, but her sisters were no less adventurous. Julie and Rosie visited Australia and New Zealand as ‘the Albu sisters’ ‘England’s latest and greatest sopranos’. Julie was said to be ‘a pupil of Jenny Lind’ (Miss Lind had coached at the Royal College while Julie was a student). When the girls visited Honolulu, Julie met a wealthy local planter, Colonel George W Macfarlane, ‘Chamberlain to King Kalakaua’, and the couple were wed in 1894 in San Francisco.

I don’t know what became of Rosie, except that she seems to have wed in London in 1895.

Music, however, continued in Berthold Albu’s family, when a granddaughter (?), Margaret Cecilia (b Johannesburg, 13 March 1907), daughter of diamond merchant Henry and Cecilia Albu, became a pianist. She owes her mention here, however, less to that fact, nor that having been ‘niece of Sir Henry Albu’, than to having become the wife of John Logie Baird. 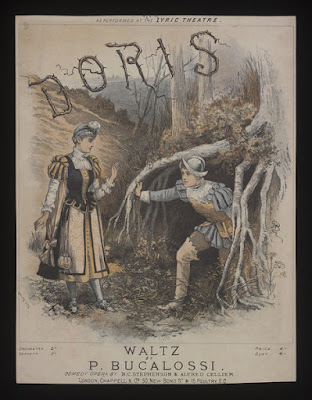 Posted by GEROLSTEIN at 3:49 PM

Hello, Kurt. You wrote "Gilbert was undoubtedly behind the choice" of Albu as Toto. However, Ainger (p. 124) and Stedman (p. 139), say that Gilbert sold the performing/staging rights to Clay for a period of ten years (and went so far as to state publicly that he had nothing to do with the casting or staging). Therefore, it was Clay who oversaw the London productions of 1876 and 1881, and also the New York production and American tours during that period.

Postscript: May I add that I have seen an enthusiastic production of Princess Toto and my impression, at least based on that viewing, is that it should be played in rather a zany vein and certainly needs a leading lady able to exploit its comic potential. Its musical material is not more difficult than, I would say, the easiest of the Savoy soprano roles, but it still should be sung legitimately.