The Mysterious Mr Montgomery, or Delving in Dumbartonshire...

.
I know. Its a strange hobby. Dipping into ebay over breakfast. I don't buy anything, because they won't let me. They say that my email of forever and my password (which they gave me) don't match, so I can't sign in. And if I try to change the password, they say they will send me a TXT with a code. I don't have a TXT machine. It's simply too exhausting to worry with. Mind you, they are probably better off without me: I'd be on to them squalling about the fake listings, the false identifications ...

Anyway, the seller of my favourite item today isn't faking ... he just admits that he hasn't the faintest what his delicious photo is. Two lads outside a meat and chook shop owned by one 'A Montgomery'. No place, no photographer's name: the back of the card is blank. 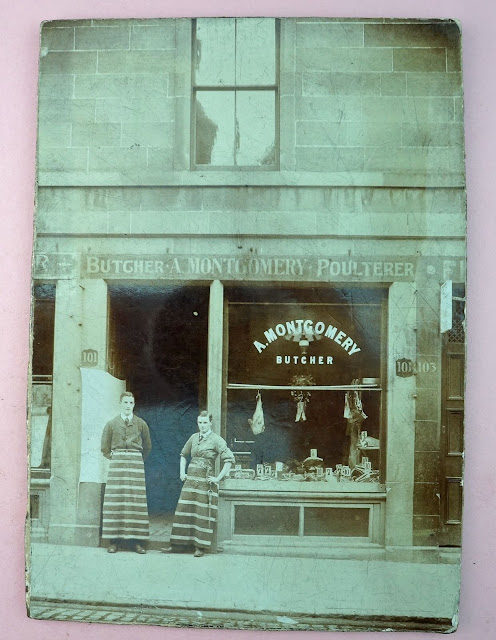 OK, Kurt. No bacon and farm fresh eggs till you've solved this one.

Well, I plumped straight away for late 19th century Scotland. It looks so like the photo I have of my grandad outside his tailor's shop in Perthshire. So ...

Answer. This photo is from Kirkintilloch, Dumbartonshire. The 101 is 101 Townhead where an Andrew Montgomery (b 1873) worked as a teenager as 'assistant to a general dealer'. There are quite a few Andrew Montgomerys in Victorian Kirkintilloch, and even in Townhead, where a widowed Mrs Andrew M née Helen Cooper with three daughters married a James Baird of no 104 ... It was perhaps her late husband (d 1863) who did the poultry. But of course it could be the Andrew who died 1903 aged 60. Or 1916 aged 65. Or 1929 aged 69.

Anyway, these days there is no Mr Montgomery. 101 is the headquarters of something named Project 101. 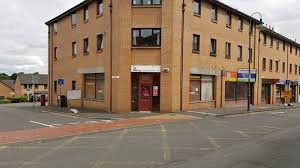 Bacon and eggs time, I feel.

Posted by GEROLSTEIN at 4:57 PM