.
A smidgin of curiosity can lead to a whole day of delving.

Over the years, I’ve skipped past this lady’s name uncountable times. Acrobat, dancer and mother (?) of a heap more of the same. Finally, today, the wheel of fortune stopped at her, and I thought: why not? Of course, circus and music-hall folk are even more opaque, when it comes to names and facts, than actors and singers, so finding out who this Finette was, was clearly going to be a difficult task. But, tiens! A clue. My 30 year-old notes record that Finette Raymur was Mrs Frederick de Castro, and that she had a daughter, 4 February 1874, at Southampton.

Of course, there is no de Castro in the records. But there is a Fredericka. Murray. Of course: Raymur. It’s an anagram of Murray. This is going well. So ‘Finette’ is Mrs Murray. Don’t worry, it’s not all going to be that easy. So who is de Castro?

The Brothers de Castro, or les frères de Castro on posh days, were a gymnastic, contortion and acrobatic act, active from 1867 to 1873, when each went his own way ‘owing to the increase in the size of their families’. All quite amicable, and anyway they weren’t brothers, any more than they were de Castros. ‘Frederick’ was John Murray and ‘Alfred’ was John Williams. Both from Manchester. Luckily, after the split, Alfred went off to Australia where overseas celebrities had the sort of interviews they didn’t get at home, and as a result, Charlie Holland has been able to give this tale of the act’s early life as told by Mr Williams. (With additions by me).

Williams (b 27 May 1846) was employed as a printer’s devil, Murray (b 1842), seemingly, as a fitter in their home town. The younger man went into physical training, brought his friend in as a partner, and they developed a trapeze act. Thomas Burton had established a circus at what he called ‘The Casino’, and was advertising for acts – any sort of acts – and the boys obviously responded. Apparently they made their first appearance 9 March 1862. But not for long. A month or so later Mr Burton was advertising the ‘Royal Alhambra Circus’ to let. So it was back to the drawing board for ‘the Brothers Williams’.

I next see them out at the People’s Concert Hall and the Victoria Music Hall in early 1865. They are still the Brothers Williams (Alfred gets his dates wrong here), but by December they had joined Sanger’s Circus under the name of ‘les Frères de Castro’ and, for the next two years travelled with the Sanger organization. In December 1866, they appeared at Islington’s Agricultural Hall, in 1867 I see them described as ‘the boneless grotesques’ and performing at Woolwich, and by August 1868 they could advertise that they had fulfilled engagements at Weston’s, the Pavilion, the Middlesex, the Raglan, the Holborn Amphitheatre and Cremorne.

Now it gets tricky. ‘We introduced our wives into the show and were known as the De Castro Troupe, which was the first male and female troupe’. The year: 1869. It was actually 1868 but, never mind. The troupe comprised the Brothers, Mdlles Finette and Clarisse, ‘Young England’ and ‘Le petit Tom’. Clarisse was Mrs Williams née Caroline Harrop (m 1863) daughter of a fustian cutter in Tickle Street (!) and formerly a cotton weaver, ‘Young England’ (‘the tiny acrobat’) was her eldest son, Edward, and I suppose Little Tom ‘the posturer’ was another. Or not. Which leaves Finette. Who is supposed to be Mrs Murray. And I suppose the mother of his daughters Rosina (26 October 1869) and Lucie (1 February 1872). After which John Murray got married to one Hannah Roberts and … but we’ll leave all that till later.


Begin? I think so. Even for an acrobat, Rosina’s birth is rather too early for comfort. So, is the ‘Finette’ of 1867 (clearly ‘christened’ for the reigning queen of the can-can) not the same person as the ‘Belle Finette Raymur’ of 1873? I very much suspect not. And my suspicions have been confirmed. A tiny notice in an American paper tipped me off. Mrs Lucy Murray otherwise La Belle Finette died in Norwich aged 33, 9 September 1880. She left a will, in which her executor was named as John Murray, acrobat, of 30 West Square, Southwark. Our John's address. And the 1872 daughter was named Lucie … I wonder how the Americans knew … wife? De facto wife? Passing fling? Hardly. It would help if I could find them in London for the 1871 census: the Williamses are there, but not the Murrays.

So in 1873, when the new troupe was set up, was La Belle Finette Lucy? Or was it Hannah? When did Lucy drop out of the picture, and who was she anyway? And why did she write a will, at thirty-three years of age? And Hannah. In the 1881 census she and the three oldest girls are all listed as ‘acrobat’. But by that stage, she isn’t being billed in the act, even though the troupe is still the Finette Raymur troupe. Many questions. Which a few documents would, I suppose, solve.

But back to 1873, where the team is father, Finette, Thomas de Castro, Rosina and Ana. I have no idea who Ana is, and she isn’t around for long, Rosina is four years old, and Thomas … is this ‘le petit Tom’? Seemingly it is, for in 1880 he is ‘contortionist and posturer’. But he’s supposed to belong to the other half of the organization! Phew!

The new Raymur troupe toured and voyaged – I spot them at the Folies-Bergère in 1875, and a little Alice Maud was born in 1877 at Leipzig. By 1880 Rosina, Lucie and Frederic(k)a are billed in the act, along with ... what! … Fräulein Maude Raymur ‘the most graceful and daring lady acrobat of the day’. No, no! Maud was three years old! And what is this? Mr Albert and Miss Frederica in music-hall sketches. But Frederica is six! But the two of them are with the Raymur troupe at the Marylebone Music Hall … In 1882 she is ‘the funny female clown’! 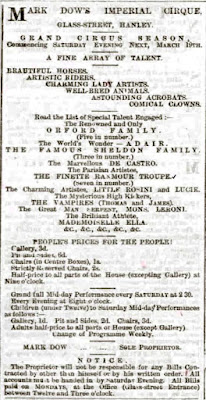 In 1885 a Finette Raymur troupe is still performing, both in Britain and on the Continent, but in the 1890s Rosa (sic) and Lucy have struck out as a singing, dancing act on the music halls under the name of the sisters de Castro. Latterly they joined up with actress [Mary] Maud Stoneham (b 10 March 1862) playing sketches with song and dance (and the occasional skirted somersault), and they were still visible until 1900, when the three unmarried ladies retired to 37 Babington Road, Wandsworth together, as dressmakers, for the next four decades. Rosina died at 70, in 1940, Lucy 31 July 1951 and Maud lived to the age of 97 and died in 1959.

I have lost Fredericka, Tom 'de Castro' gets muddled up with the Tichborne claimant, and I haven’t followed up the non-acrobatic children, but a descendant of Hannah Elizabeth (Mrs Herbert Walsh) has put some of the family tree on ancestry.com. And with it, this photo. It’s Hannah Murray née Roberts. La Belle Finette Raymur. Mark 2. Thank you so much, Mr Walsh. 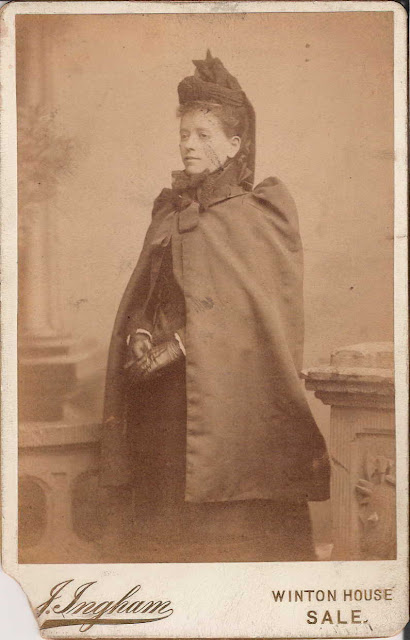 Posted by GEROLSTEIN at 2:12 AM