A Violet by any other name ...

.
On my breakfast time stroll through the photos on ebay this morning (a particularly fruitful morning) I noted a cute little actress-y picture of one Violet Leigh. Here it is. 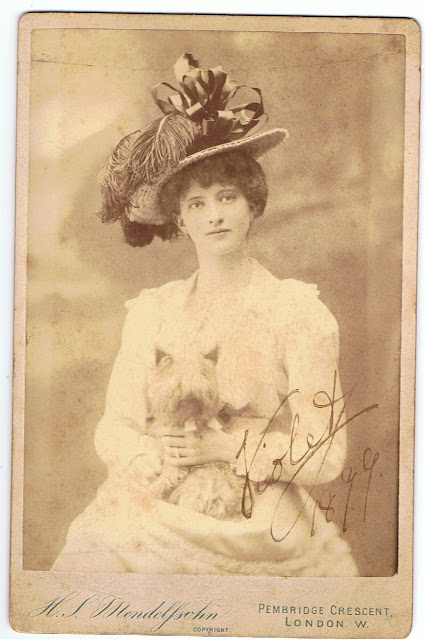 Violet Leigh is familiar to me, as she played, in the 1880s and 1890s in supporting parts in the musical theatre, from Erminie to The Shop Girl. The photo was dated 1899, when ‘Violet’ (and I don’t imagine it was her real name) disappears from my view. Maybe to marriage? I must say she had kept her young looks exceedingly well after a dozen and more years on the stage. And, what? The back of the photo is inscribed ‘please return to … 45 Upper Grosvenor Street’. Wow! Lofty address for a chorus girl. And from that address, in 1899, Miss Violet [Agnes Evelyn] Leigh married …

So do we have here a wealthy lass with an urge to sport a while on the stage? I hoped so. But my hopes were hamstrung. I soon realized that it just wasn’t possible for this lady to be attending a hunt ball or a fashionable soiree, other people’s society weddings, holding a Charity bazaar stall and pouring tea in Warwickshire, and the same night dancing in Miss Esmeralda for Madge Rockingham in Croydon or playing in panto at the Lyric Theatre, Ealing. The whimsies of the aristocracy can only so far go. But there is no limit to the pilfering of high-society names by aspiring chorines.

So my photo is, alas, not Miss Leigh of the Comedy Theatre. It is Violet, the elder daughter of Sir Edward Chandos Leigh, barrister, niece of Lord Leigh of Stoneleigh Abbey whose family can be seen in the censi of the time with his wife, two sons (both killed in the Great War), two daughters, and up to a dozen servants.

There she is ‘coming out’ ‘fresh and sweet in pure white satin and pearls and a bouquet of lily of the valley’ at the Warwickshire Yeomanry Officers Ball in 1892, being presenting at court by her mother in 1893, attending the Queen’s drawing Room and doing all the things the niece of a Lord is obliged to, before in 1899 she wed Mr Bertram Hardy, son and heir of Sir Reginald Hardy (Bart) of Dunstall Hall, Stafford. Bert, in due course, succeeded to the baronetcy, Violet became a Lady, an autobiographist … and survived to the age of 98.

Her two sons survived the second war, and the elder, Rupert, lived to 95, dying in 1997. I suppose it was his heirs who got rid of grandma’s old photos …

Now to try to put a button on the other Violet...

Posted by GEROLSTEIN at 7:09 PM