A Sunday Drive in the Country.

Those of you who have my age will remember ‘Sunday drives’. You didn’t have to go anywhere. Papa took the car (ours was a little 1930s Ford, black), piled mama and the kids inside, and headed … well, occasionally to see something or someone, but mostly just to have a drive. Having a private car in the 40s and 50s … we had to make use of it.

Nowadays, of course, even children and Persian peasants have a car. The wonderment of the gentle ‘Sunday drive’ has gone, midst the welter of motorways and Mitsubishis. But, today, we did it. And it was splendid.

We rumbled out of Yamba around 11.30. We needed some coffee (I’d given our stock to the Farmer’s Drought Relief), and a few other bits. We also had a whim to visit Broom’s Head, which Paul hadn’t seen since he was a child, and I never. We also fancied Lunch. Somewhere. Anywhere. Just a Sunday drive in the sunshine … somewhere. Well, it worked out deliciously. As follows.

We drove from Yamba to Maclean. A familiar trek. Antique shops? Later. Are you hungry? Well, yes. Let’s lunch. In Maclean? And we want coffee … obvious! Our favourite coffee, in Yamba, is from the stable of Botero. I know, I immediately thought of Santiago the cyclist, too. But, to my surprise, Botero (why?) is run by a lady called Jill, and is headquartered in good old Maclean, where she has a café … so … two jobs in one strike? 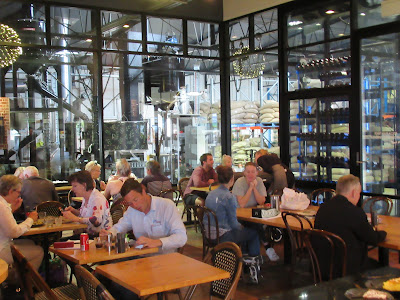 Botero. A total success. And I didn’t even have a coffee! But we bought a couple of bags to take away. Also some of Jilly’s delicious tea … 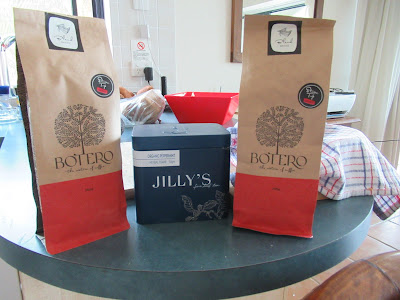 Food. Paul had a splenditious piece of barramundi. I know. Fresh fish here, 30 metres from the Clarence River, is not a problem. But cooking it, and accompanying it … this was, he tells me (and he’s no food-mutt) a 10/10. 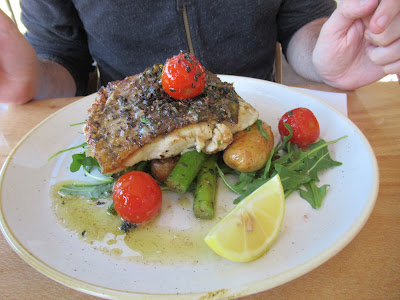 I (who, sadly, have to avoid tomatoes and most green leaves) ordered a Moroccan dish. They gave me chips instead of the salad. The filo pastry with herby lamb stuffing was sensational. I looked for the Moroccan in the kitchen. Chips? For me, they are nearly always too slowly overcooked. But I ate these. All! And there were some nice crispy ones at the bottom. 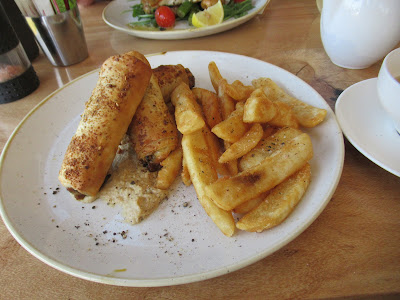 A first class lunch. And the mint tea (real mint) was to die for. Probably the most delicious mint tea I have supped since the Souk in Tangiers circa 1970. Rendez-vous, Botero: very soon.

Off we headed for the rest of our Sunday-Monday drive. Townsend, Gulmarrad … strange mixture of names, and why do these spots exist? These days, it seems largely as camping resorts. Again, why? So on we plunge. WATCH FOR EMUS. Oh yes! Oh yes! Well, I watched. For 20km. I saw birds, and a rather elderly kangaroo … but, excuse me, I was promised an emu. Roads department, you need to change your wording. You promised! 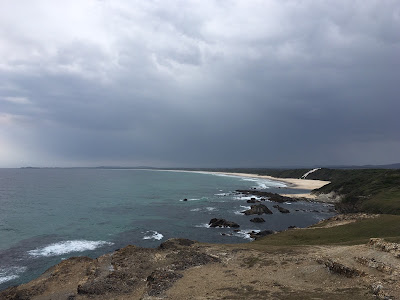 Our cavalcade ended at Broom’s Head. Where our friends the Huttons (of Deutsche Oper fame) have a house. Unfortunately we didn’t know which house, so we guessed. Wrongly. We went to the lookout at the end of the Head .. and it rained!!!!!!! So we are kind of chilly in this photo .. 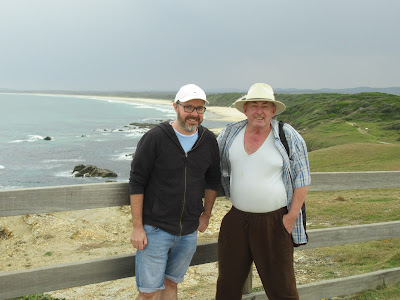 Then homewards. No. Antique shops another day. Kurt is weakening. 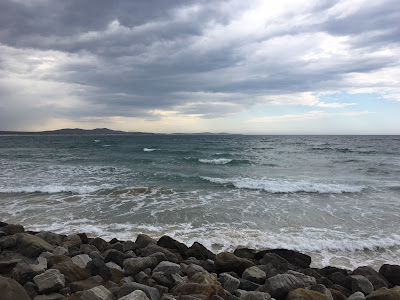 So here we are, back at Cove, potato and courgette soup a-bubbling, after a lovely Sunday drive. On a Monday.