.
Now that Victorian Vocalists is published, and the 1,000 biographical articles, under that heading, stored away in the vastness of my dropbox, I’ve made it a bit of a mission, this winter, to sort out the stories and the real identities of members of the D’Oyly Carte Opera Companies. I’m really chuffed at what I’ve managed to achieve – Fred Clifton, Emilie Petrelli, Lillian La Rue, Duglas Gordon, Edward Clowes, Augusta Roche, Clara Merivale, Kate Forster – so many mysteries, now mysteries no more.

But, of course, I’ve only told you about the successes. There has been the odd … harrumph! ... let’s call it ‘non-success’. I mean, Geraldine St Maur is still a total mystery to me. And to everyone else. I haven’t got past the start line with her! And then there are Kate Talby and her partner Percy Charles. That annoys me, because Miss Talby was an important lady: right up there with Rosina Brandram as one of the best Cartesian komische alte contraltos ever. Oh, there’s no worry about her career, that’s minutely recorded, from 1882 to the twentieth century. But … who was she? Where did she come from? Where did she go? Did she have husband, children, parents … why did she spring from Jupiter’s head in 1882, spend 20-plus years in the limelight, and seemingly leave no trace of a fore and afterlife?


Well, I spent not one, but two whole days digging, fiddling, guessing … and, yes, I’m going to tell you all about it … and came out with, only, some maybes.

So. What ‘information’ did we have on Kate to start from. Shiplists to and from America (1894), and entries in the 1901 and 1911 censi, in all of which she is Mrs Kate Charles, wife (or 'wife'?) of Carte comprimario tenor Percy Charles. Or ‘Percy Charles’. To whom, in the 1911 census, she says she has been married for 28 years. One child (his, hers, theirs?) dead. 1882-1884 shows very few Percys marrying a Kate in Britain. Maybe they wed in Ireland or Bulgaria or Never-Never-Land. If that were, of course, their name(s). 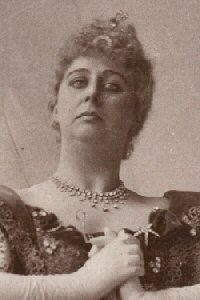 Where to next? I have established Kate as an actress from 20 March 1882. When she can be seen playing with Alfred Hemming and the Walton family in touring comedy. In 1885, she is on the road with a pantomime company, playing Abdallah in The Forty Thieves… and guess who joins the company! Percy. OK, did he join because they were already a number, or did they meet here? Had Kate been chorusing with Carte? I don’t think so ... she’s pretty visible in the first years of her career. But ‘twenty eight years’ is such a precise number…

Right. Into the censi. 1891 should be helpful. But … where are they? And the rest of the company with whom they’ve just been playing for Carte in Birmingham … sigh ... they must have spent census night on a train. Or Concorde.

Well, I wasn't getting anywhere going forward, so … I tried back. Yes, all this takes HOURS!

Oh. Found. Death registration for Kate L Talby. 1935. L? Is it she? The age is more or less right. Well, the ‘L’ led me off on a wild kookaburra chase. One of which was a hopeful identification of our girl as ‘Kate Lynne’, from whom she took over in the 1881 Hemming/Walton show. I’ve rejected that now, after wasted hours…

OK. Kate was born in Westminster. So she said, and I see no reason thereupon to lie. Surely, she has to be the ‘Kate Taleby’ registered there as the daughter of Thomas Tailby, stableman, of Wilton Mews, and his wife Catherine née Newton. I’ve no proof, but … we have addresses for this Kate and her sister Maria in the school registers for the 1860s (St Paul’s, Westminster )… 8 Lowndes Mews, 5a Lower North Street … nice addresses! But daddy was a groom for grand families …

So, assuming (how dare I!) that this is she, she thus is (dubiously) the Kate in Leicester as an infant in 1861 … and if she is, in 1881, she seems to be a kitchen-maid in the home of Richard Campbell MP. Mother, born Leicester, is a housekeeper in another grand house in Belgravia. Maria, her elder sister, is also working as a domestic servant… Father, apparently, drove his cab through the pearly gates in 1865. 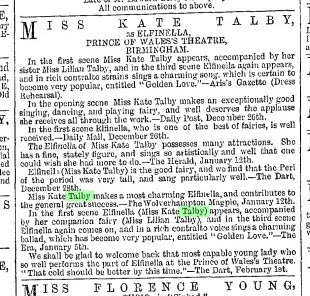 And from 1882 … actress. Alfred Hemming’s company, William Sidney’s Queen’s Evidence, in pants for the Preston panto Gulliver’s Travels, Frederick Neebe’s southern tour, John Shine’s Three Hats, panto at Birmingham as a very tall singing fairy, The Forty Thieves, before she joined the Carte organization. She played not only the Gilbert and Sullivan repertoire, during her dozen years with Carte, but the contralto roles in such as Billee Taylor, The Vicar of Bray, The Chieftain, Mirette. 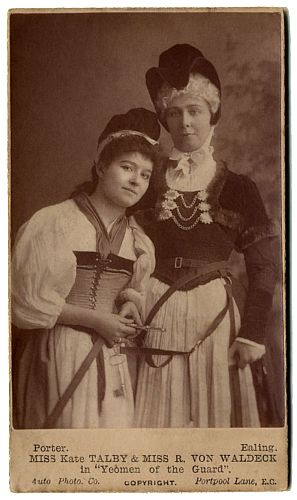 From Carte, she moved which notable success to musical comedy, appearing as the heavy ladies of The French Maid, The Circus Girl, The Runaway Girl et al, and even returned to the dramatic stage to play in such as Sappho with Olga Nethersole.

Well, it all sort of fitted. But I had three ‘pieces’. I had no decisive proof that the kitchenmaid and the contralto were the same Kate Taleby-Tailby-Talby. Nor that the 1935 death certificate went with the kitchenmaid and/or the contralto. That ‘L’ worries me. And I’ve no idea of the veritable name of Mr Percy Charles.
So, Kate. I had still got you classed as a ‘maybe’. Why? Only sopranos lie, usually!

RED ALERT: 24 hours after I published this, Betsy Miller, the best theatrical researcher I know in the US of A, and who has helped me hugely over the years, came back with a death notice. Dateline 2 January 1936. Annie Stanyon Ley chased the reference and came up with the clipping .. 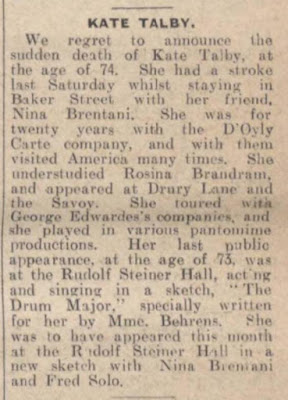 Bullseye! (on day four). Kate, I apologise for even thinking that a lady of your ilk could have been a kitchenmaid and daughter of a cabbie. I apologise for querying the maybeness of your marriage. I apologise for casting doubtful glance at your sister Lilian ... but it's your own fault. You and your husband would invent phony names. But, in the end, I got you!

Here are the facts...