*
Once upon a time, three years and some ago, in the very earliest days of this blog, there were born. in the back paddock at Gerolstein. two wee trotting fellers. I called them Fritzl and Seppl, names which just happen to be the Austrian ones of my father and my grandfather. 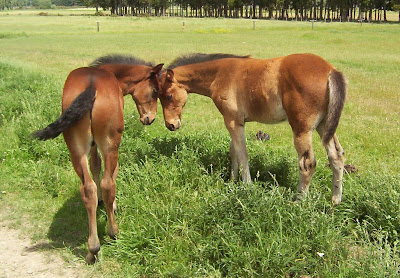 I have to admit that Seppl was only conceived and born so that the more richly bred Fritzl should have a playmate with whom to grow up…
And it worked. They became (and still are) sweetheart-mates, and when Fritzl went off to be trained as a racehorse by Murray Edmonds in Motukarara, Seppl went with him.
Fritzl (The Soldier Fritz) made his debut as a racehorse at two, with some decided success. Seppl stayed in the shadows: growing and waiting and being a pal.

But today it was Seppl’s turn. He is freshly three years old – still young for a trotter – but, to my delight, he is ready already to make his first attempts as a pre-racehorse. And today was the very first of those attempts. So, in spite of the fact that I fly out of New Zealand tomorrow, I simply had to drive across to Bank’s Peninsula this morning to see him ‘run round’ at the workouts. Just that: no big race, just a ‘run round’ with two or three other horses in a wee rehearsal race.
My first surprise on arriving chez Edmonds was that … I didn’t recognise my ‘son’. I saw this fine wee lad, with every sign of being of our ‘Robinson’ family, tied up at the barn… and I didn’t recognise ‘wee’ Seppl. Partly because he is no longer so wee, and partly because Fritzl wasn’t there to distract the limelight. When I looked closer, of course, that was my lad ... the haircut, the eyes, the face .. but, gosh, the body?! 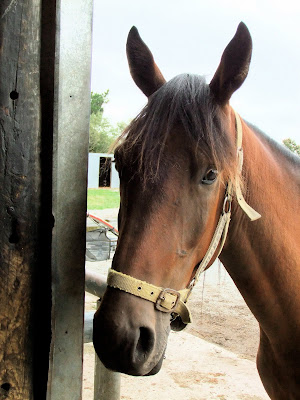 When he trotted out to the race-track, I was really taken aback: he looks very slim, but gosh he looks like a racehorse. Maybe it’s the flowing mane? 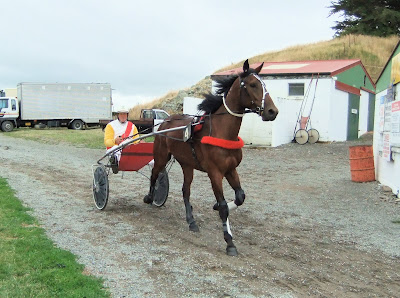 I had resigned myself to the fact that, from a standing start, he would probably fail to go away. But, no! Eased gently into the three-horse line-up by Murray, he took a few delicate first steps, upped a gear, zoomed past the one that had stepped away fastest, and went straight to the lead: and there, for 2600 metres, he stayed, trotting sweetly, mane a-flying, looking much nicer a trotter than his ill-fated brother (Boris) and sister (Wanda) ever did. 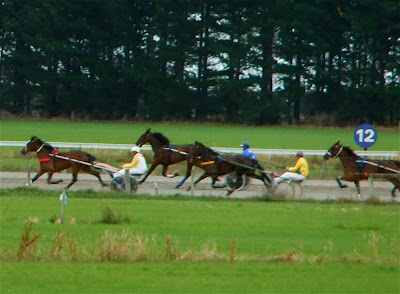 And he passed the post in first place, a length ahead of the best of his rivals.

At the end of the trials, Murray brought baby Lucie out on to the track. 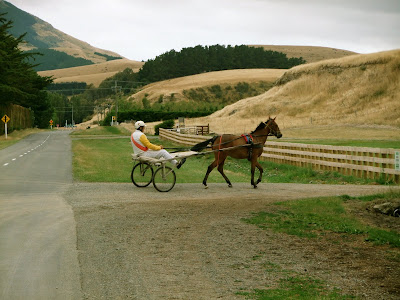 Amazing! Lucie, who was figuratively sucking a sugary hoof a few weeks back, now with a work-cart behind her, trotting neatly (give or take the occasional ooooh! at the sight of a vehicle or a flowering irrigation system or … a corner) round the Motukarara grass track…
Heavens! The ‘family’ are up and going!
Maybe she will be one of the first Love You babes to race in New Zealand. 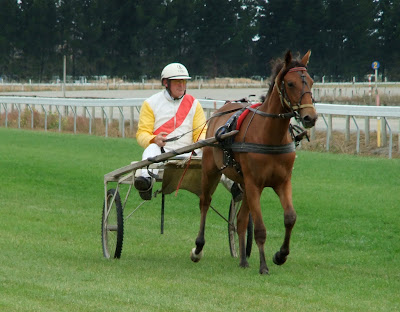 Horse racing rarely allows you to have a perfect day.
Livia, in Australia, was due to have a final pre-racing trial tonight. Yesterday she sliced up a leg on a fence…
That’s horses..
But tomorrow Elena goes to the trials, to try to get herself back into gear after her disastrous trip (which I refrained from telling you about) to the race-she-was-tipped-to-win at Oamaru.
Well, today I have had the good and the sad.. what about tomorrow?
And at 3pm I am at Christchurch airport .. destination Sydney, Australia

Stop Press: Elena ran a splendid trial. She was really there only to test the combination of gear we are using to try to combat unfortunate gallopy happenings such as occurred at Oamaru, but she not only behaved 95 percent perfectly (the driver still has to 'shut his eyes going round the last bend'), she went away well, sat parked for the entire trip behind the 'fashionable' Anvil's Never Easy (a sister to our dear wee now-in-Australia 'Dobbie'), ran past her in the straight -- without even being tapped up -- and only just gave second best (beaten a neck) to the horse, Code Red, which had trailed throughout, and which is in any case not a maiden, but a race winner from last season. The time, too, was a spirited 2mins 31.8 secs (mile rate: 2.01.7). So if Lena can do that without really making an effort -- she came back in with barely a hair turned -- I think her turn cannot be too very far away.
What a nice, workout/trial couple of days I have had! Now let's see them do it on race day!
Posted by GEROLSTEIN at 11:27 PM