There’s an old adage, much subscribed to by my friend Jack, which says ‘they only win when you aren’t there’. The horses that is. So when I decided to pop over to Sydney for my first visit to Barry and Rosie in their new home, I said to Wendy, ‘Just carry on’, and pointed to what seemed the only possible race for her, in an HRNZ January-February schedule annoyingly de-Canterburyised: Tuesday 25th.

Tuesday meetings are meant to be for a lesser class of horse (though it doesn’t always turn out that way! The Purdon, Butt and M Jones colours are often seen out Tuesdaying) and the field that Elena drew was – given a couple of imponderable first starters – not bristling with form. I was fairly .. nay, rather daringly too .. confident, in spite of the presence in the field of a professional runner-up named Music Box Dancer. And the wizard of Trottech tipsterland labelled her a virtual cert. The Australian tipsters put her fourth: but they didn’t know what we knew, that we’d sussed the little (large) problem that had caused the Oamaru debacle, and moved to correct it.

Tuesday racing was invented to fill a gap on the Australian gambling channels. A very happy invention for all concerned. But this meant I could be sure of seeing my girl’s race, if not in person, at least on trans-Tasman TV. The TV in question turned out to be the largest I have ever seen.

Tuesday was Australia Day. I don’t know why the world needs these jingoistic fetes, but there you are. It was Australia Day and folk were feting. We were invited to do that feting in megastyle, at the stunning Vaucluse home of Barry’s clients and friends, Richard and Lilli Kaljo. On arrival, I shyly inquired of Richard whether I might watch my race … well, how was I to know that he has been the owner of a Doomben Cup winner and umpteen other top class horses, and is a rabid racing man! As was, it seemed, everyone else in the room!
On went the TV, round went the buzz .. and I’m sure the reason that Lena dropped from $6.60 to win to $4.10 to win was because of the telephone betting activity that came out of the Kaljo living room. 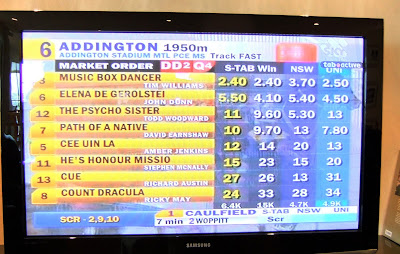 The race did not start well. Elena did her usual ‘I hate anything in front of me’ act, turning her head away from the gate in the run-up to the start, and – after Oamaru – John was not hustling her. So she made a poor start, as the rank outsider zoomed to the front and set off at a good pace. But John didn’t seem worried: in fact he seemed to be just dollying unconcernedly along near the back of the bunch, until he pulled three wide and let Lena run up to the leader with about 600 metres to go. The leader promptly threw up a very white flag and vanished backwards down the rails, carting his followers with him, and Lena found herself in front almost by default. Round the home turn she cruised – John sitting quietly, as the only likely challenger loomed up on his right elbow. The commentator promptly started calling the other horse the winner – an unfortunate foresightly habit of commentators – but John and Elena had a full tank, and John had only to brush the accelerator for our girl to take charge of the situation, and glide pass the post sufficiently and wholly comfortably ahead.
She came back with not a hair out of place. 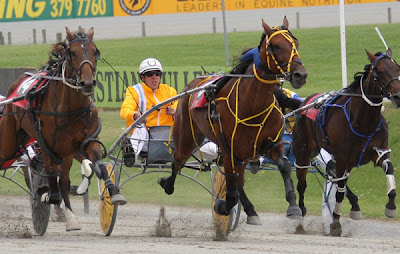 Up in the Kaljo palazzo, Lena and I were the hero/ines of the hour, and my Australia Day’s resolution to drink just a little light beer went, of course, plum out the window as we fiddled with mobile phones trying to get through a call to Wendy in the birdcage..
Such excitement for a Tuesday maiden at Addington? … oh, yes. This win is a wonderful one in my book. First of all, it’s a win gained out of all sorts of adversity -- remember the steel pins in Lena’s throat? -- secondly, it’s the first win for Wendy and I as a team, and for Wendy her first win in her first season as a solo public trainer, And it may be the thirtieth victory that a horse I have owned or part-owned has notched up in my time as a horseman .. but it’s the first one ever (after the placings of Davey Crockett, Master Ado, Smart Don and Il Campione) on the headquarters track of the NZ Metropolitan Trotting Club at Addington. 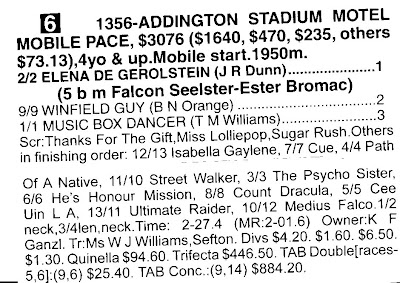 It will be a long time before I forget Australia Day 2010. And thank you Richard and Lilli, Robert and Sandra, Michael, Joel and all the gathered company: I couldn’t have had my longed-for win in more convivial and friendly company…

But next time, damn the adage, I am going to be there.
Posted by GEROLSTEIN at 12:26 AM