Out of that photo box...

Goodness, what is there in that photo box? Maybe I should stop looking… 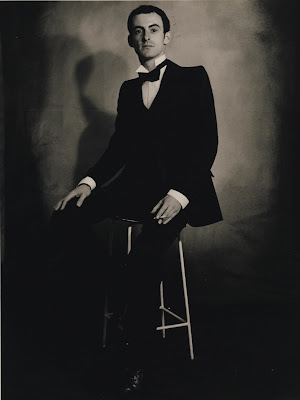 This is me, for heaven’s sake, in 1973. Thirty-seven years ago! I didn’t own that suit, it was out of the wardrobe of the Harrogate Opera House where I was playing, for the nonce, in a Christmas production of My Fair Lady. Just back in England definitively after my two-year 'career' in Monte Carlo, I was a late addition to the cast and a part was manufactured for me out of all sorts of bits of music taken from here and there in the score. I remember I had to sing Pickering’s music in ‘You Did It’, because the dear man (Martin Scott, where are you?) couldn’t hold a vocal line. It wasn’t a bad production, although, apart from the Eliza (Liz Mansfield), only I, one other lad and a rather fine soprano chorister could actually sing. That other lad went on to be a West End leading man, and is now Paul Bentley, international operatic librettist. I remember the photo session too. This photo was done free. After which the borrowed suit came off, for the taking – as payment -- of some more ‘artistic’ photos which I guess, for 1973, might have been considered a touch saucy… Well, Marilyn Monroe did it: why not I? By the way, Jim Moran of Harrogate, you were really a very good (and artistic) photographer… and I don't think your 'daring' (for 1973) efforts -- of which a couple of the more modest herewith -- quite made a porn star out of me! 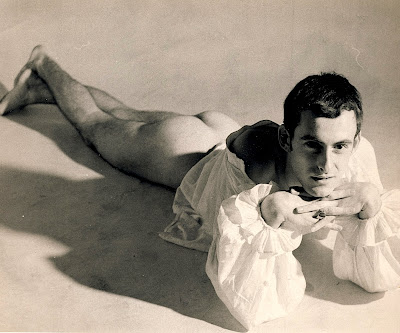 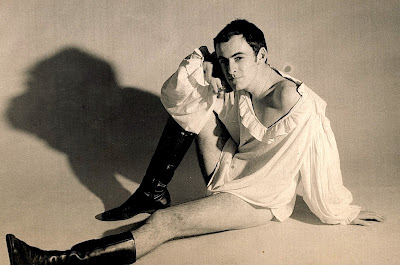 I can’t find my picture of Paul and I ‘Wouldn’t it be loverly’-ing, so here’s another one – even older – from out of the famous box. A production circa 1970 by Opera Piccola of Schenk’s The Village Barber at, of all places, Sheffield. That’s the tenor Uel Deane at the right, and John Wakefield or was it Winfield at the left, and yes, me with the beard, but alas Patrick (McGuigan?), Caroline, Brian (McGuire?), I only recall your first names. I also recall nothing about the opera, and nothing about Sheffield except that on the Saturday the bloke in the B&B room next to me took me to my very first football match. Sheffield Wednesday vs Swindon. He had just been hired as a player with Sheffield. It was a 3-3 draw and fooled me into thinking that all football matches were as lively and as good fun! 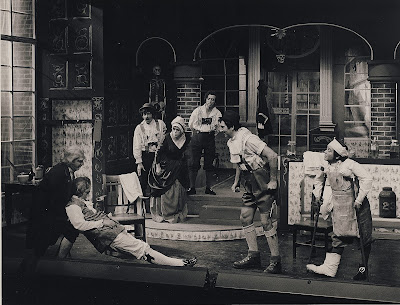 postscript: I've just discovered that Jim Moran did indeed move on from that tiny little studio in Harrogate, and from sleeping in a shed in the garden.. he's become an award-winning photographer with some glorious credits, as you can see here I wonder what other (future) 'celebrities' he has photographed nude!
Posted by GEROLSTEIN at 2:04 PM

... dedicated research by son Craig and myself on soccerbase.com has revealed a 2-2 draw between Sheffield Wednesday and Swindon Town on 30 January 1971 but no 3-3 draw between them until 29 December 1993... presumably the latter is the one, with a little excitement adding to the score in retrospect...

of course i meant former one

30 Jan 1971 is the one .. somewhere I still have the programme ..
Alas, I forget the nice young man's name..
as I obviously forgot (how could I?) the score
but, yes, it was a fun game for someone who has never really been interested in ball games..
A year or two later I became a regular spectator at Monaco, and my last outing was a grim 0-0 between Leicester City and Leeds United circa 2007