.
It comes but once a year.
And it’s a day I always like, because it means we get a visit from good-fun ‘silver-daddy’ John, who is in charge of branding every yearling in the south Island north of Waikouaiti.
This year, of course, we had only Douchelette to get done and, as always, I was a tiny bit nervous. Duchess is fiercely protective of her babies, and – as she showed when she buried her teeth into the vet, on day one of this filly’s life -- she’s not scared physically to warn off invasive humans.
Douchelette has been into the crush several times, when her mother has been being served with this year’s dose of Love You semen, so she didn’t protest at the change of scenery and the ‘walls’, and passed most of the time, while we waited for the branders to arrive, attacking her weary mother’s teats. Weary? Oh yes, Douchelette is a very big girl for just 10 weeks of age. 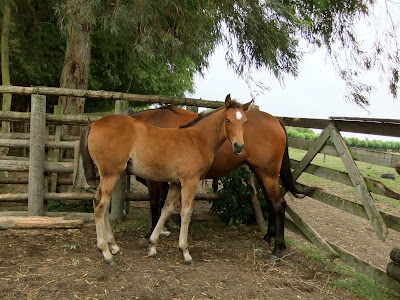 However, when a couple of strange men invaded the crush, Mademoiselle la Douche quickly got the message that something was up, and looked to escape. 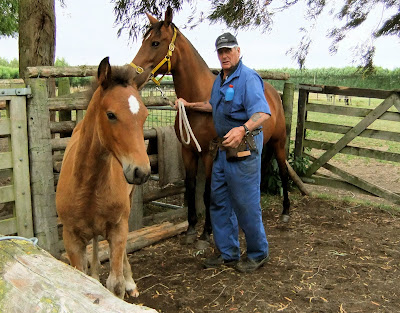 And mum – a little surprisingly -- didn’t seem to be protesting at all as her daughter was manhandled into a quick neck-shave.. 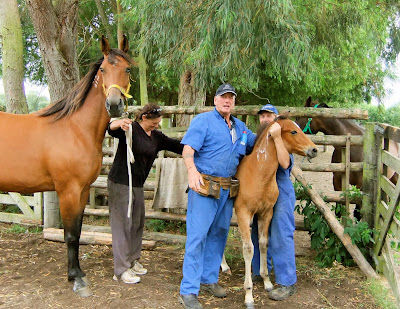 and after a kind of rugby-tackle second catching 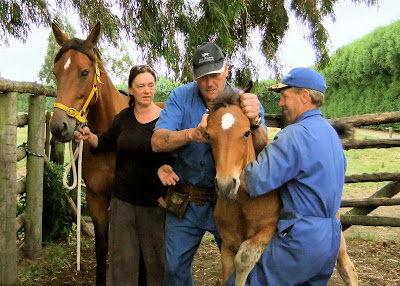 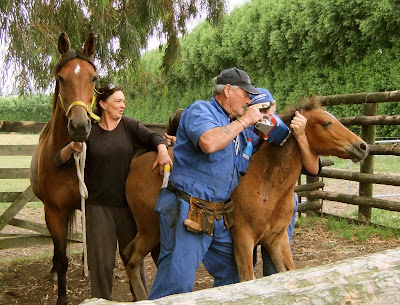 And then it was all over. Duchess and Douchelette returned to their 5-acre paddock, and Douchelette – whether to show her deep unconcern for all that had happened, or in a thumb-sucking regression to wounded-feelings babyhood -- headed straight for her fourteenth breakfast.
You know, sometimes we think it would be wise to wean Duchess’s babies from her as early as possible, so that they don’t become fixated with their very fixatible mamma. I think with Douchelette – easily the biggest of her three babies, and (so John said) the biggest Love You foal he’s seen -- we may have to save Duchess and her undoubtedly aching udder from her vivacious child!
Posted by GEROLSTEIN at 3:43 PM

Hi Kurt
John French of HRNZ passed on your link for us to have a look at your 'Branding Day' blog. Well done. Pity you didn't include the best looking filly of the day!!! (lol), a.k.a. Barbara 'the book keeper' of the John Boyd branding team.
Have printed off to show John as he doesn't have his own computer.
Cheers
Barbara