I knew that dowdy, disagreeable Harold Park (see earlier post) was not the face of Australian trotting. The fact that it has been so long listed for the chop speaks for itself. But up until last night, Harold Park -- four visits in forty years -- was the only harness-race venue in this country I had ever visited.
Not any more.
Last night, Barry and I hoofed it seventy kilometres up the Hume Highway from Lane Cove into the almost-country and to Menangle Park Raceway (recte: Paceway .. what about the trotters?) .
The Paceway is, so a kind gentleman guarding some of the private precincts told me, a work in progress. Although it has been open getting on for a year, they are still developing it. Well, all I can say is, what they have done already is delightful, delicious and dazzling. When it’s done, Menangle could easily be my favourite harness venue, all countries and courses put together. Though I recognise that they still have work to do. 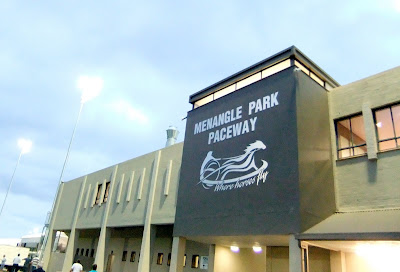 It was evident from the moment that we drove in at the cheerily-manned gate (gold stars for the vehicle marshallers) that this was another bowl of cherries to the grim, saucery emptiness of the city venue. The course was thronged with lively racegoers, obviously all having a wow of a time. I could have been back at Rangiora or Nelson at Christmas time, except for the fact that it was night. More than that, it was an occasion: the new-style Menangle’s first meeting under lights. And I may say right away, splendid lights both in the public areas and on the track.

The most important part of any racetrack is, of course, the piste itself, and this one is a stunner. To look at, anyway. I can’t speak for driving on, though I’d give my left pinkie to get out my retired amateur driver's gear and have a try. It’s about 1500 metres round, immaculate in its grey-beige grit, with perfect sightlines, set in agreeable countryside and ... well, the horses evidently like it too. One medium-class ex-Kiwi horse ran a 25.8 first quarter, the main race (1 mile) was won in 1.53.0, and a 1-2 wins race in a time just fractions slower. If this is where the formerly ridiculously-named ‘Miracle Mile’ (draw one, lead, stay there, yawn) is now to be run, then the race will be at last able to live up to its name. 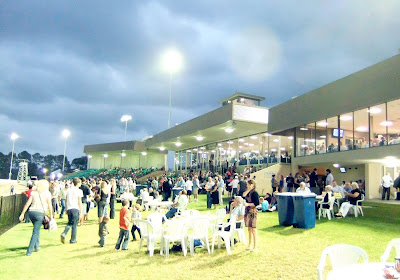 The public buildings are simple-looking and apparently effective. I say apparently, because I didn’t get to go inside. Building one, the main stand, is a bar and lounge for members and sponsors. Building two is a dining room … for members and sponsors. The dashing marquee alongside these stands is for committee, celebrities and dignitaries. And the second marquee seems to share the same fate. 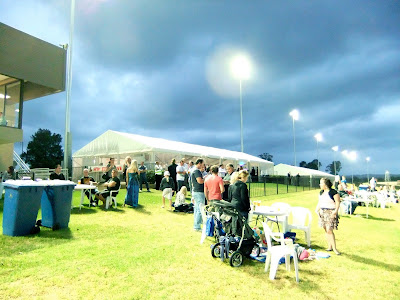 And the hoi polloi … such as I for this occasion was ... where do we go? There’s one open stand, after the line, there are a few rows of bleachers in front of stand number one, and a very nice little lawn down to the rails. But food and drink – and shelter from the showers we got -- are underground. Who wants to be underground at a race meeting? No complaints about the catering, though. There was excellent ‘race-course’ tucker, a choice of three beers (including a wise light) and the liquid refreshment was a whole dollar cheaper than at Horrible Park.
Gentlemen of Menangle! Priority one in the next phase of development – even though you are, of course, already ten km ahead of the HP course -- is to provide something a bit nicer for the non-dignified, non-sponsorising non-membership. I mean, that’s how we attract new people to harness racing, isn’t it?

Complaints? I have to think hard. They need to repaint the sign advertising SOUVENIRES. The Garrards shop (one charming lass) is far too small and situated in the unvisitable (to me, alas) owners and trainers only area. I had to ask permission from another friendly official to be able to go and spend my money. $10 to get in and $3 a racebook is tough after New Zealand freebies. And Barry, who usually bets with the bookies said that the handful of them there (including my mate from HP, he works hard!) offered awful odds and he spent the evening betting on the tote. But, otherwise… they have got it all so amazingly right. Menangle is glowing evidence in favour of getting racetracks out of city centres and into agreeable and open-skied venues where harness racing can once again be a spectator sport for all, and not just ‘an industry’ and a dreary piece of TAB-fodder. I look forward with anticipation to a visit to Melton, Menangle’s Victorian equivalent in September. 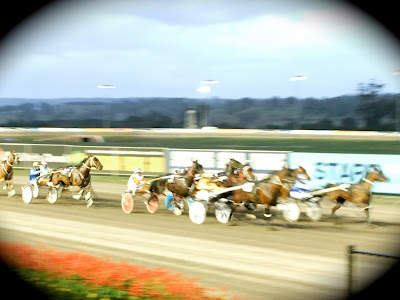 I’ve talked so much about the place, I haven’t paid any attention to the horses. Sadly, we were too late for the first, a trot with a field made up almost entirely of mostly re-named (why this continuing insult?) ex-Kiwis including old pal Chew the Fat, and we arrived only for the third, a one-to-two-metropolitan-wins race. It was a stunner! They cut out the first quarter in 26 and something, completed their mile in 1.53.6, and the performance of the all-the-way winner, a Cam’s Card Shark horse named Genuwine was little short of staggering. Although an aspiring-to-the-Interdoms American import, Lonestar Legend, took out the principal race six-tenths faster (after runner-up Cullen’s Legacy’s lightning first quarter), for me Genuwine was the star of the evening. Cam’s Card Shark, begorrah!
I snapped Genuwine during the race, but they were going so fast I just got blurs, so I snapped him again in what passes for a winner’s circle. I’m sure it is only temporary. I hope it is. 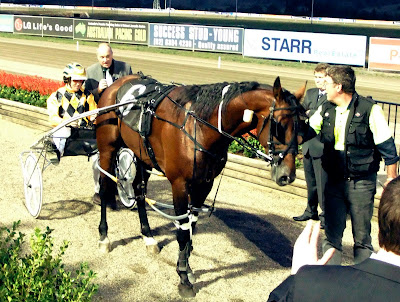 (Postscript: I discover Genuwine is also a US import with a huge record, huge winnings and a prospective stud career in Australia. So my ‘discovery’ isn’t one!)

Thank you Menangle, for a very nice night. The rain didn’t matter at all … but next time I’m coming I think I might call in advance and let you know -- especially if it's wet -- that I am accounted by some a very small ‘celebrity’…
Posted by GEROLSTEIN at 2:30 PM