Yarmouth, or The Days that the Rains came down

.
Well, I didn’t make in back to the Ale and Oyster. The weather didn’t permit. So I spent the day, instead, snuggled in my suite, strolling round the 19th century with Miss Sally Forde, Victorian Vocalist. I only ventured forth at the onset of evening, to open my lungs in a brisk tramp across St Catherine’s Downs which, tiens tiens! just happened to end up at the White Lion. I don’t sit on my own anymore, at the Lion, I’m on the way to being an honorary local, and I spent a grand hour and a bit with the Guinness, with Stewart from Ryde and Peter from the local drama group, until it was time to head back to Hermitage Court Farm for my dinner.
Thursday morning, the sky was a bit more favourable, as Fred and I set out for our two nights in Yarmouth at Ivy Cottage. We got a bit tangled up in the regulation numbers of roadworks, deviations and road-closeds, but we made it in time for lunch. Yarmouth is surprisingly (to me) small, so it took me no time to scout round the characterful little area of shops and eat-and-drinkeries. I had a yen for something without chips and of course without lettuce, and most places seemed to be devoted to steak or fish and chips. I guess that’s what the daytrippers off the ferry from Lymington want. But I don’t. In the end, it was no contest. A buzzing little fairylit spot called Salty’s offered bouillabaisse. I wasn’t, of course, going to attempt a huge bouillabaisse at midday (last time I did that, at Villefranche-sur-mer, in 1990, I ended up in tears of frustration at being unable to eat it all) but the fact that they even offered it, and that they boasted freshly-caught fish from the family boat (every restaurateur in town seems permanently to fish and/or bake, can it be true?) persuaded me. So I ordered my ginger-beer shandy (even though I wasn’t driving anymore that day) and a starter-sized helping of fish cakes. It was a very nice fish cake indeed (yes, one, for 7 pounds 50), so I booked myself a table for the evening and set off to visit Yarmouth Castle, which is right next-door to the restaurant. That's right, in the middle of the village. 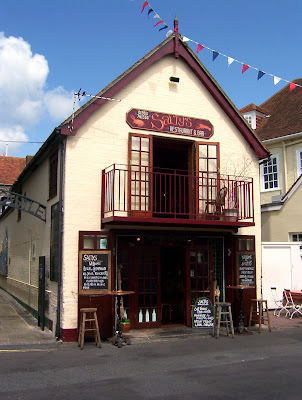 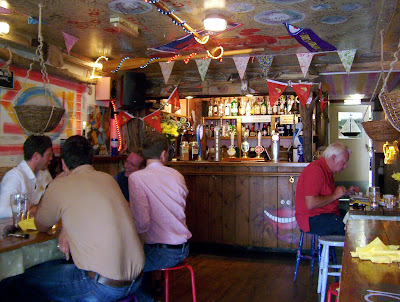 Small is beautiful. Yarmouth Castle isn’t what you expect a castle to be: its more a little bulwark fort, built by Henry VIII to guard the mouth of the River Yar and the Solent, and made-over by countless occupants since. It’s looked after now by English Heritage, and it couldn’t be better presented: the commander’s and gunners’ lodgings, the powder magazines, and a fine little exhibition upstairs, alongside the cannon post, which explains everything in nicely adult terms. Definitely worth the 3.60 entrance fee (I forgot to ask for my senior citizen’s discount, and when I did, the lady was so incredulous I let it ride!). 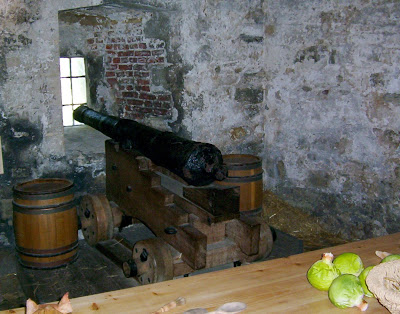 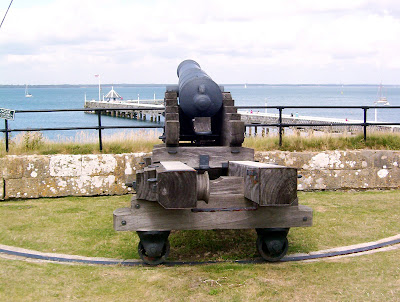 I peeked into the town’s main square-towered church, nosed down several attractive streets – there’s a nice-looking waterside yacht club with a ‘Royal’ prefix, but it’s ‘members only’ -- had an hour with my feet up in my little white (again) room at Ivy Cottage, took advantage of its top-notch bathroom to spruce myself up for a brief (o!, little did I know!) evening out, and set out for a quick drink before my bouillabaisse.
The Bugle Coaching Inn looks huge and too -good-to-be-true ‘antique’, but I failed to find a cosy wee pub and the interesting-looking King’s Head advertised ‘Families Welcome’, so I opted for the Bugle. It is big, but inside it’s cosily chopped up into ‘rooms’, decorated with unkitchy Yarmouthy things and not too many of them, and the friendly servers even produced me a good Tio Pepe … in a wine-glass as someone had destroyed their last schooner.
And then, as the rain came down, off to Salty’s. I have to be honest and say my longed-for bouillabaisse was a bit of a disappointment. It was more a seafood stew (not the same thing), and some of the seafood wasn’t so fine. The bugs and single shrimp had nearly nothing in them, the ray wing was all bone…
However, the meal was an undoubted success: for I shared my table (the place being full) with Nigel and Debbie Harper from Crawley (Debbie’s thick, flaky white fish looked magnificent.. dammit), who had walked across the Island from Ryde over the last few days, and we had a most convivial time which we continued after dinner back at the Bugle, whence we wobbled forth at closing time…!

Since the weather was clearly set to off-and-on-inclement, this morning it was evident Nigel and Debbie would have a rotten time walking back to Ryde, so we pulled Red Fred out of his ten-quid parking spot, and pointed him across the island. Since they hadn’t seem some of my favourite spots, we went via Shalfleet, Newtown (of course), Calbourne – where there were no charabancs today, and Winkle Street thus looked so much prettier – Brightstone, and a visit to its first-class tiny museum and St Mary’s Church, then on to Quarr Abbey. Well, you can’t leave Wight without seeing Quarr Abbey! 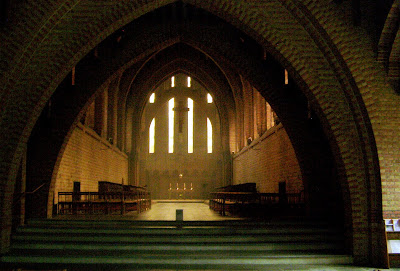 Sadly, the sun wouldn’t shine through the church windows today – it colours the whole church the shade of rose-coloured honey when it does – but there was a bigger treat in store. This time, on my third visit, the Lady Chapel was open. And it is chokingly, heart-stoppingly beautiful. I’m afraid I choked, and my heart stopped … and even though I am not a Christian, I put my pound in the box and lit a candle .. for Ian? for me? for us both? … and then I got out, because my chin was trembling, and we went and had a cup of Earl Grey at the tea-rooms. After which, I was in order to drive Nigel and Debbie and their bulging packs on to Ryde and the ferry, and retrace my route, in now heavy rain, back to Yarmouth
So now I’m here, on my wee white bed, gazing across Ivy Cottage’s garden, where some doves are cavorting coofully (memories of St Paul de Vence!), blogging, as stretch-marks start to appear in the clouds and a little bit of baby-blue peeps through, and mulling on whether to try the white fish at Salty’s tonight, or take pot luck at the Blue Crab (but I fear chips), On the Rocks (cook my own food?), or the George Hotel which I see advertises ‘fish stew’ on a mostly rather standard menu…
I’ll make my choice over that 5 pound 40 Tio Pepe at the Bugle Boy…
Posted by GEROLSTEIN at 9:03 AM