Much discussion the other day, with the theatricals and community servants I’ve been frequenting, not to forget impassioned Peter in the pub, about the Ventnor Winter Gardens. Most particularly, of course, in this day and age, about its future.
It’s a problem, of course. Just what do you do in the 21st century with buildings and facilities that were invented for 19th or early 20th century circumstances and entertainments which no longer exist? Do you (a) turn them into picturesque monuments to an era past, style Blackpool Tower, do you (b) modify them so they can be used for the entertainments of today (supposing such entertainments exist and can be found), or do you (c) bulldoze them and replace them with something else?
I guess some cases are ripe for each of those three solutions. Which one is apt here?
So I thought that I, given my combination of entertainment and business backgrounds, had better go and have a look even if it meant paying two pounds to park my car while I did so (yes, it’s the one Wightish thing that really irks me).
My first impressions, as I trundled into view down the hill, were, I have to say, not good. The Winter Garden building was constructed in 1935, and in a wilfully modern style. There is nothing sadder than a faded, out-of-date ‘modern’ building, and this one was clearly not a particularly good example in the first place. Worse, it’s been tinkered with since. Here a 1950s accretion, here a 1960s alteration. Ugh. And now, too, it’s all sea-dilapidated. The salt air is eating the outside paint, the curly rails are on their last rusty pinions. 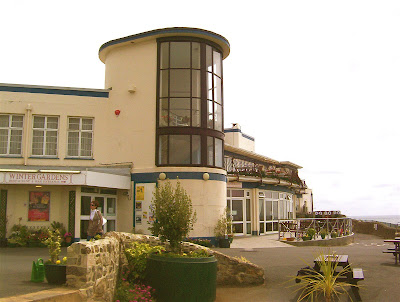 Evidently it doesn’t come into category (a): I’m afraid you could only give it 1/10 for architectural excellence, and that one mark would be for trying hard in 1935. Although you could add quite a few extra points for location. The Winter Gardens occupy a beautiful spot on the cliff above the bay of Ventnor, with a wonderful view across the sea and down the coast. It’s a position which must have the fans of category (c) licking their sterling-stained lips with redevelopmental anticipation. 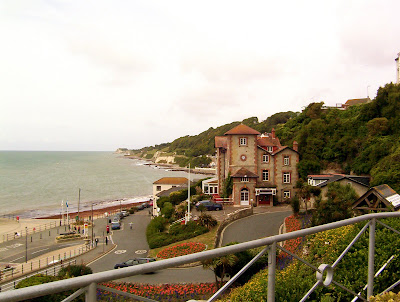 I went inside. It’s not that big, in fact. There’s a large, fairly bare, multi-purpose hall (which, with a stretched imagination, can double or treble as a theatre), with badminton courts painted on the floor, surrounded by a collection of those cluttered, ill-decorated little rooms you find backstage in any elderly provincial theatre, there are a couple of post-warring bars or tea-rooms with more nice views over the sea, and a further collection of little rooms .. I daresay they once had a purpose. The decorations all round seem to have come from the most downmarket sample-books of the 1950s. Complete with plastic flowers. It breathes all over you: ‘summer season show’. But we don’t have them any more, do we? No Tommy Trinder and Tessie O'Shea. And the holiday audience that used to attend them, and places like this, now goes to the south of Spain, or on a cruise ship. 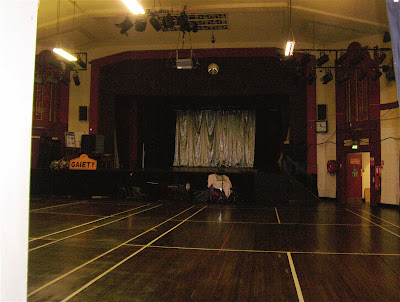 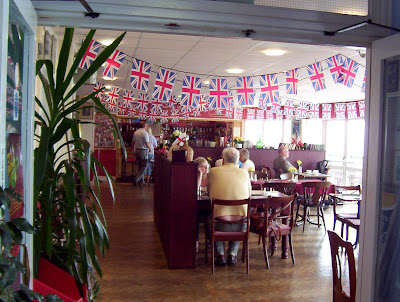 I wandered round, a little disconsolately, wondering if this actually wasn’t a category (c) case. But the more I wandered, the more I became sure that it wasn’t. Because the place is far from dead. People use it. People were supping and tea-ing, and strolling outside where a little lady was busy watering a hundred flower-beds and boxes. And, as I would find out later, in the pub, two of my companions were going there later to play badminton, and another to rehearse a local musical, My Girl, which opens there soon. The Winter Gardens is a real ‘village community hall’. It mayn’t be pretty, but it’s alive. And there are laws, aren’t there, about killing live things?
So if (a) is out, and (c) simply has to be out – think, anyhow, with what true modern monstrosity the familiar monstrosity of 1935 could be replaced! – there is no question that it has to be (b). Adapt and survive.
And that’s where the powers that be surely have a problem. Because that’s going to cost. It will cost to rip out and re-do every bit of decoration, to replace the blocked up windows and rip down useless walls, to strip off the ugly accretions – starting with the WINTER GARDENS sign – and to get rid of the attached jumble of the years (though the plastic flowers could just be burned). It will cost if you want to turn what was originally a very spare dance-hall into a theatre-space with any character, and still leave it easily convertible for badminton or a bring-and buy bazaar. It will cost to simply eradicate the ghastly ‘backstage’ and replace it with something clean and practical. It can all be done, but it will cost. And then, after all that expense, will folk use it more, appreciate it more…? They should. Because at the moment the Winter Gardens and the land on which it stands—until it falls into the sea – effectively belongs to them.
And, as I’ve quickly found out, there seem to be quite a lot of folk in the town and the pubs (and on VentnorBlog, which is essential reading for all Wights) who think it should stay that way. Including interfering, foreign, but concerned me.
The only thing is … who is going to pay?
Posted by GEROLSTEIN at 7:10 AM

I won't spoil your cognitive fun by revealing that my professional discipline, Multi-Criteria Decision Analysis (as implemented in my Annalisa software), is particularly designed to address precisely this sort of question. Watch out for Annalisa des Baux next year... sod's law will produce 2 colts I suppose.

Damn too many letters...